If the S&P 500 was a cute German redhead then that would been its March trailer:

We’ve had a very nice run in the past three weeks and at this point it’s pretty much guaranteed that we’ll end the month in positive territory. Since the 666.79 low on March 6th to this wave’s current peak at 832.98 we’ve rallied a whopping 166.19 SPX points in 21 days. For your bean counting rats  – this is a stunning 25% reversal, which in itself should lay rest to any further expectations/hopes for a medium term bearish scenario. However, we can never be sure and until the wave count disqualifies the Intermediate (4) of {1} flat scenario I’ll keep it in my desk drawer – ready to whip it out if we breach that 700 line. 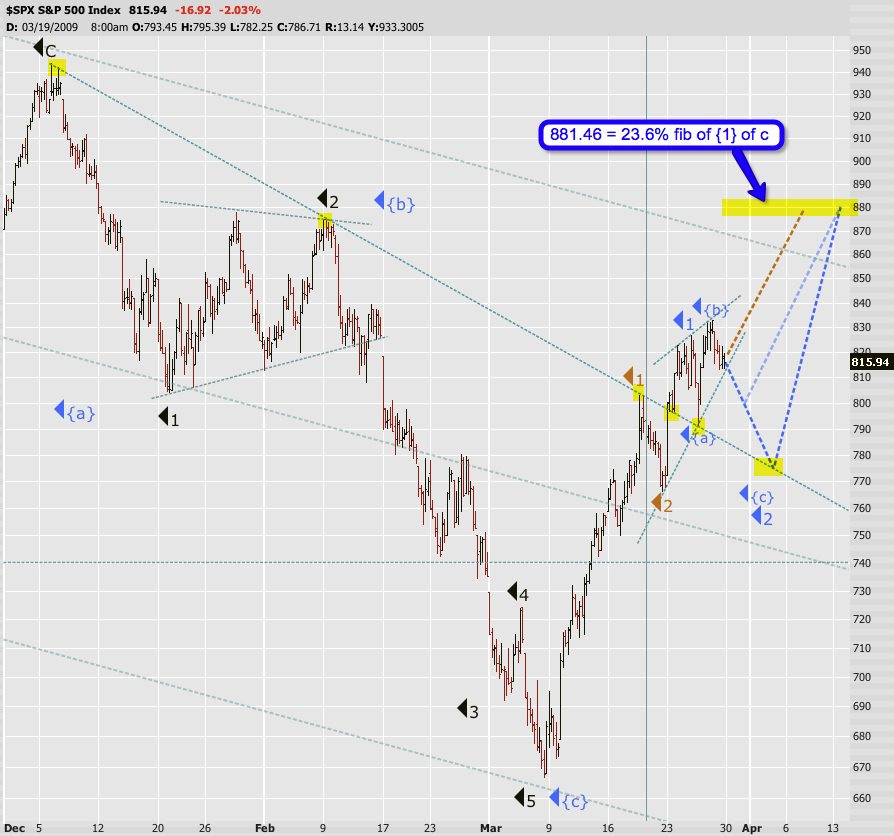 But even Lola needs to take a breather sometime before she proceeds with getting into further trouble. So, in the short term I see two scenarios – the easy part is that both are based on the assumption that we are in Intermediate (A) of Primary {2}:

Orange: We keep ignoring gravity plus all current trend/momentum indicators (see below) and push higher to complete 3 of (A). I’m a bit split on this count frankly for several reasons:

Blue: We started our descend into {c} of 2 of (A) on Friday, which should bring us down to the 770 – 780 region. This appears to be an inflection point at which various trend and resistance lines converge. It is however the maximum allowable under EWT rules, so a further drop below 770 would change our wave count. I expect some turbulence around the psychologically sensitive 800 mark. We all know how much the mouth breathers like to hang on to round numbers. 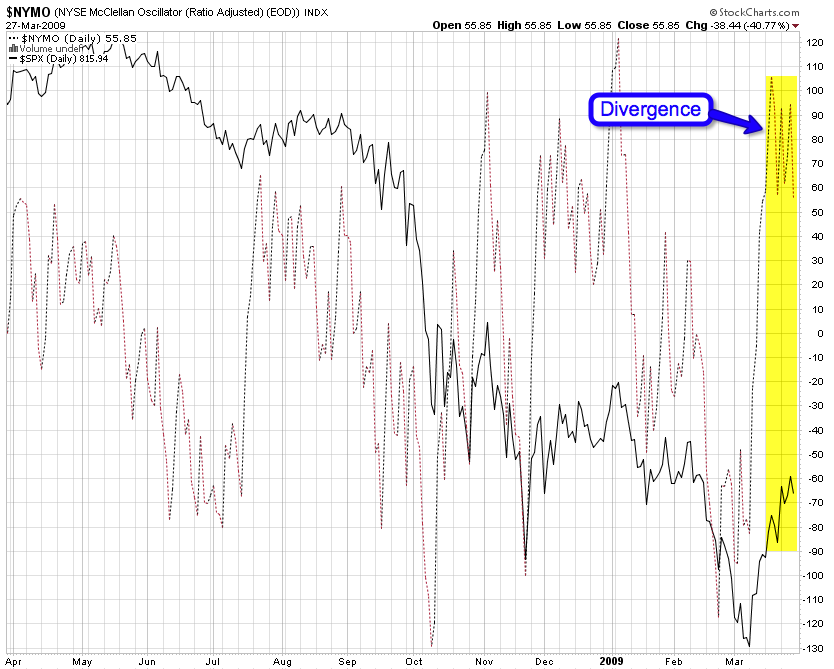 Giving additional credence to the blue scenario is the NYSE McClellan, which is painting a nice divergence. Of course that doesn’t mean we cannot add one or two more spikes back into the 90/100 region before we see a meaningful short term correction. The bulls needs a break as we are running out of buyers. 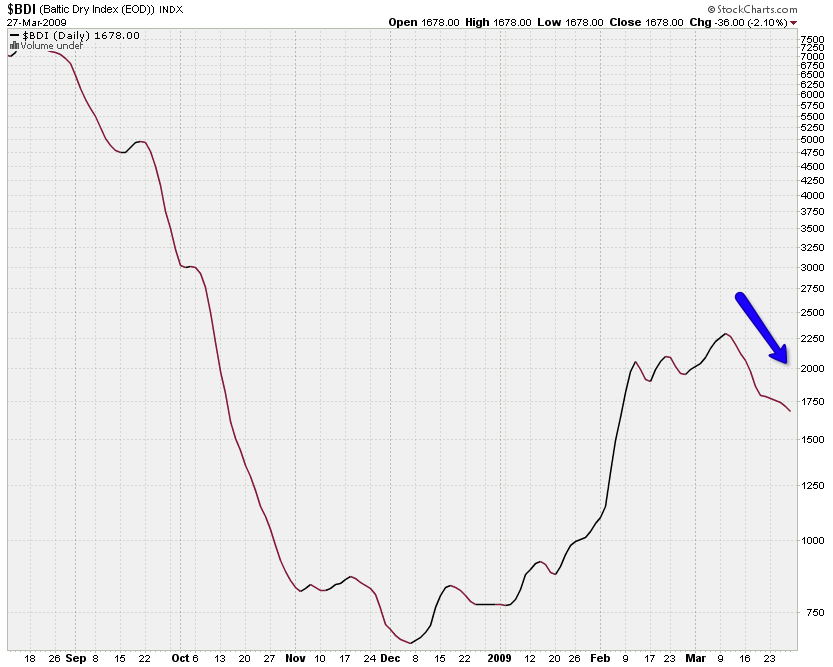 Although equity investors seem to be ignoring recent economic data the Baltic Dry Index is something everyone should be keeping their eyes on. It’s been steadily pointing down and dropping since the rally in equities began – a strange ‘coincidence’ if you can call it that. The fundamentals continue to deteriorate despite what those schmucks on Wall St are telling you. I went to the Beverly Center yesterday (as I needed new underwear – I’ve been shitting through all my old ones in 2008) and I can tell you that it was pretty much empty. Now – this mall is on the outskirts of Beverly Hills – if that one is deserted then I don’t want to know how malls in Ohio, Indiana, or New Jersey look like. 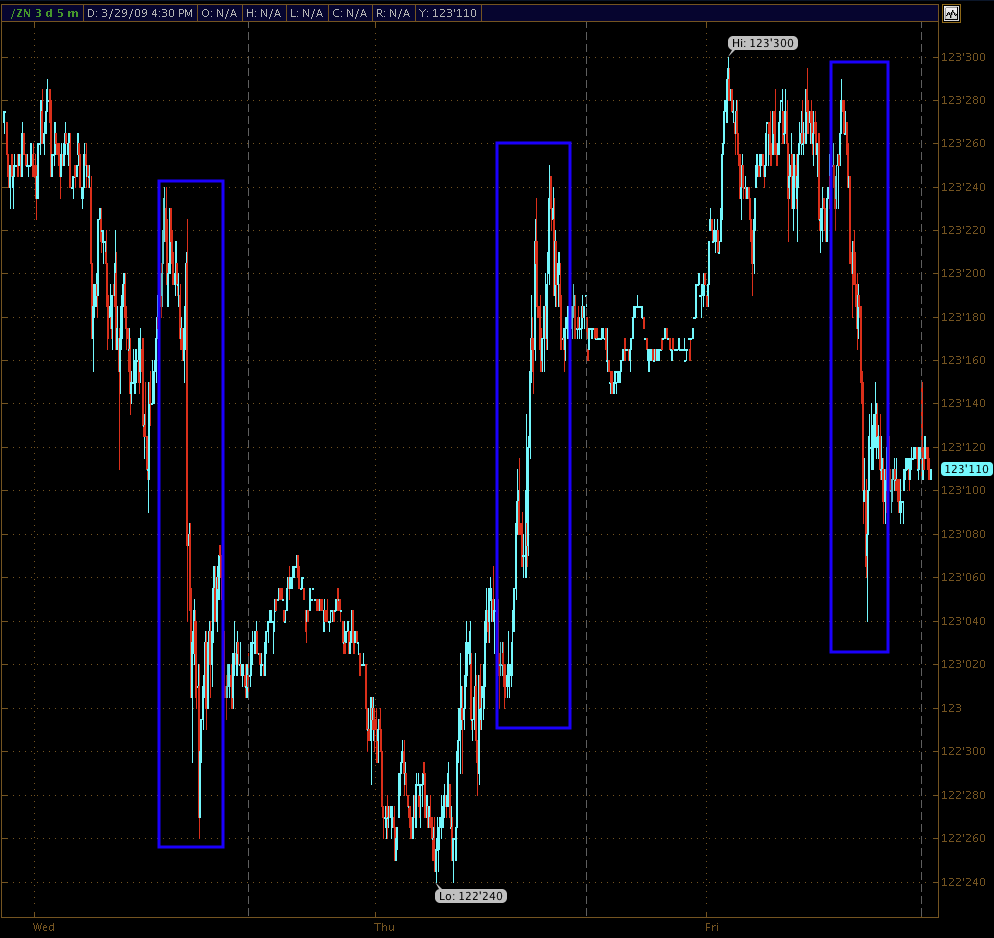 Now, having said that – you guys all know that I’m not a fundamental trader but I do follow various markets and indicators so I can draw conclusions as to the probability of certain wave counts I’ve got in the race. One of the reason I have been staying pretty much in cash for the past three weeks has been the bond market. Jeff over at the Housing Time Bomb put it very nicely:

That’s right – on top of that bond market investors/traders are a lot less emotional and smarter than their mouth breathing equity slinging cousins. And when I see intra-day swings like the ones above I get very nervous and usually reduce my exposure. Let’s zoom out a little: 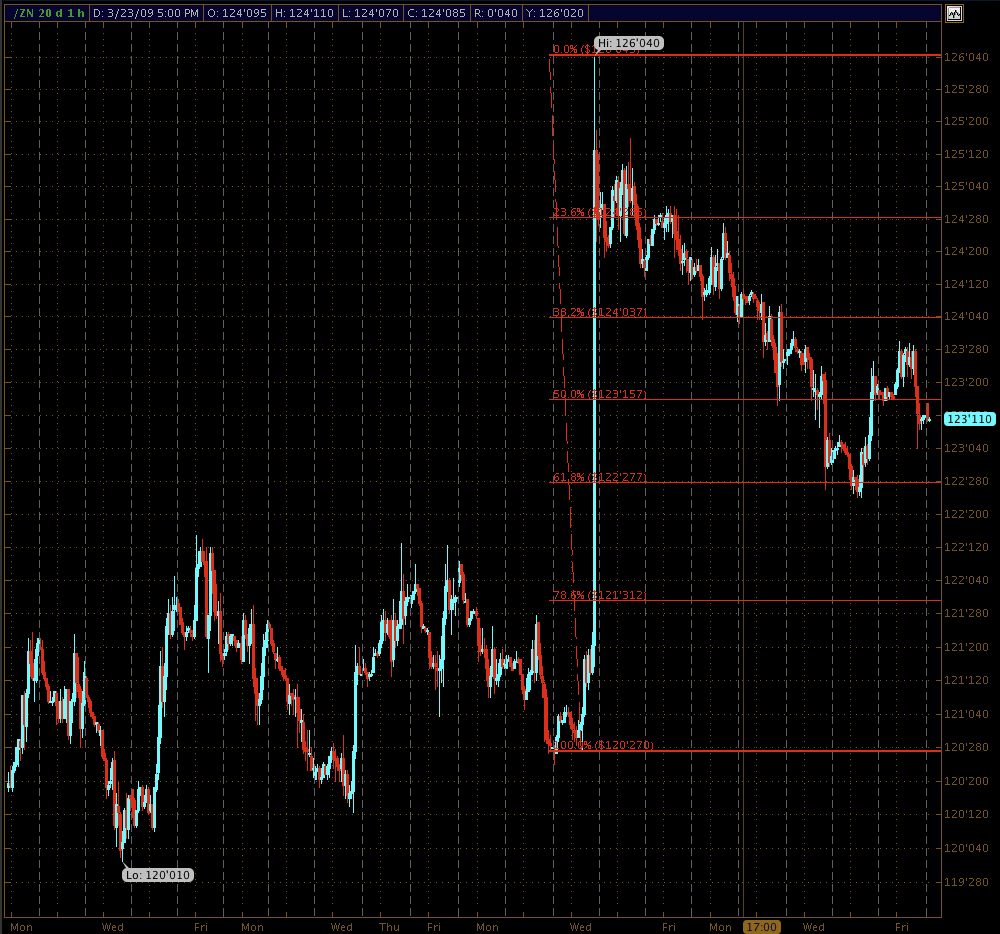 Remember when Bernanke announced that he’ll buy the long end of the treasury curve? Well, that long spike on the chart is hard to miss. But what’s also hard to miss is the fact that we already retraced 61.8% of that advance. Yes, we bounced back to almost the 38.2% line but have now again breached 50%. 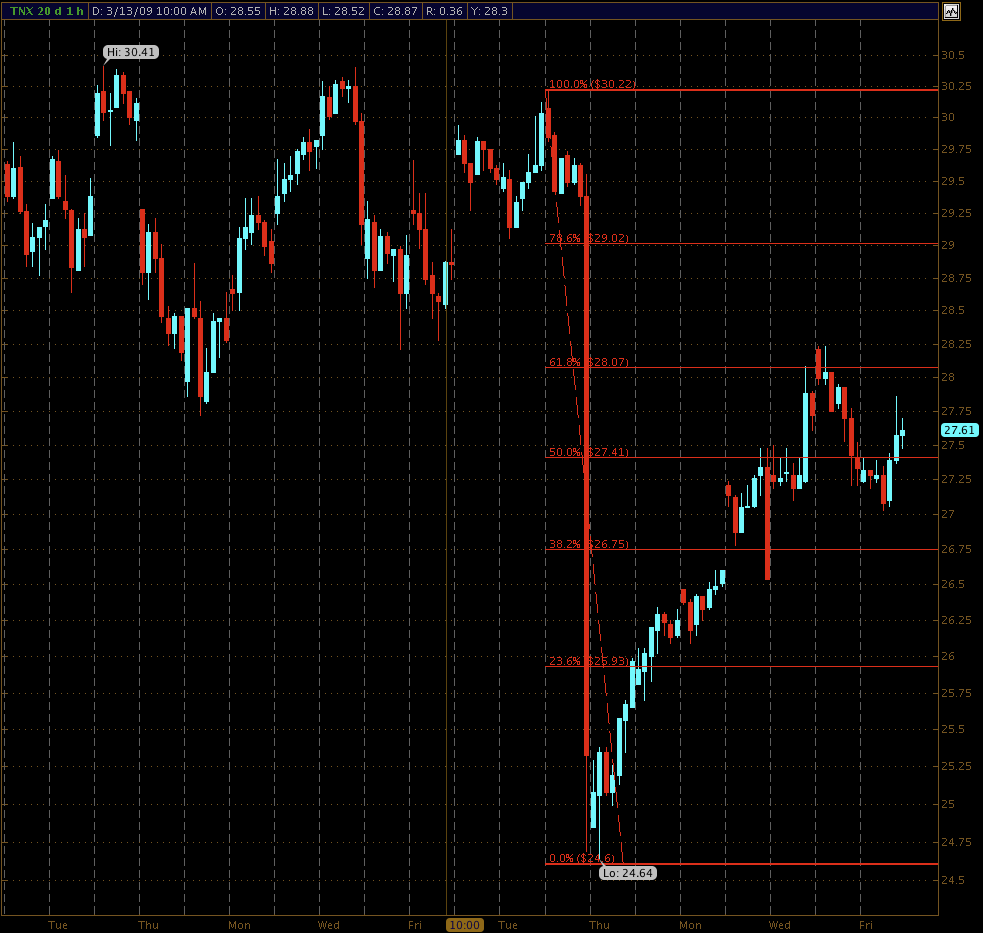 The yields ($TNX) have accordingly been creeping to the upside. Now, traditionally rising yields are bullish for equities – nothing unusual – check. But wait a minute – Bernanke is hell bent on keeping yields low but we are actually pushing towards 3% – how’s that working out for ya, Big B?

I wouldn’t be surprised to see a nice C wave to the downside (what we’re painting on the TNX looks a bit like a developing a-b-c). So, if Ben goes on another shopping spree (your tax Dollars at work) it might be the needed catalyst for equities (and treasury yields) to correct to the downside a little. 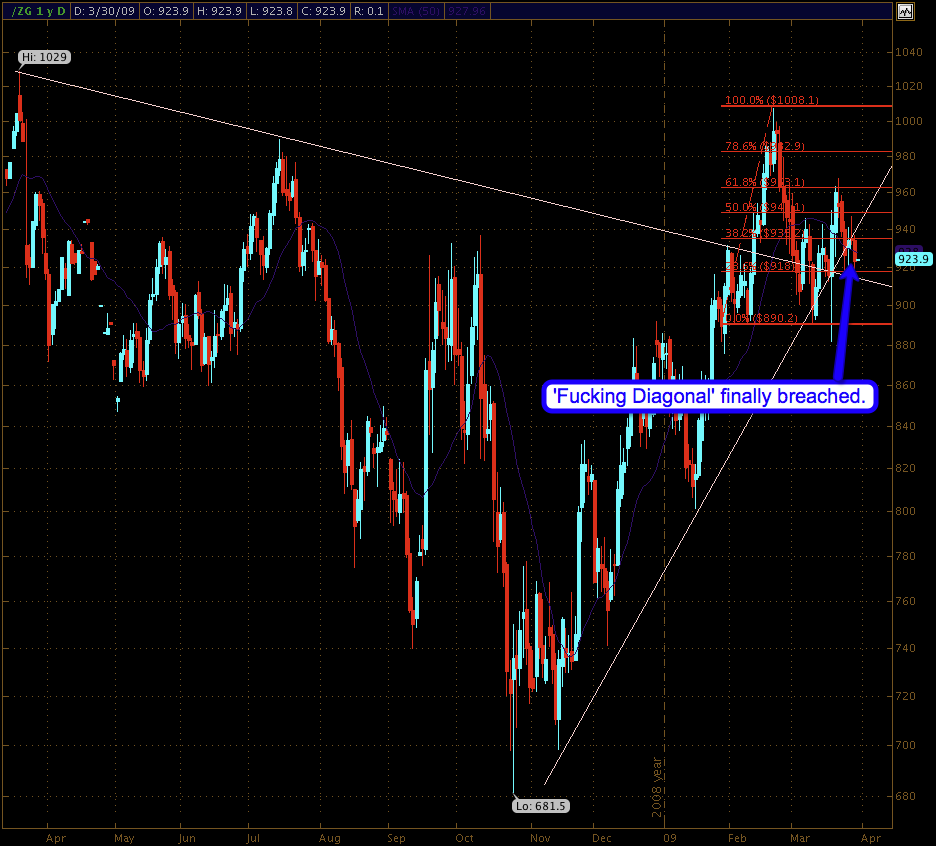 Friday I finally got my close below that ‘fucking diagonal’ support line I had been deprived of for way too long. Now, in accordance with my evil Gold domination plan, we require a little push to the upside. If those intrepid Gold bugs indeed deliver us a retest I will drop a few pennies into GLD or GDX puts. Let’s keep our fingers crossed – but finally we’re getting somewhere.

Alright rats – I have other duties to attend to and the unfortunately do not involve hot L.A. strippers – need to start putting that page on the directed trading program together which I have been promising you rats.

Oh, before I forget – we switched over to a new and improved artificial intelligence unit serving this blog on Friday night. It appears one or two people had trouble subscribing to the Zero – if you experience any problems please shoot me an email to admin [-at-] evilspeculator (plus the dotcom stuff). My apologies for any inconvenience but these things never go down smoothly.

UPDATE 12:00am EDT: I just added a first draft of the info page I promised you rats – the strategy is called evil.rat.