If you think you are frustrated by the endless gyrations we see on the equities side then just imagine for a minute if you had to write about it every day. The past few weeks have not been fun and at best have served as an exercise in not yielding to emotions. But I’m only human and just like you I go through good and bad days. But perhaps that’s why I started this blog in the first place back in 2008. If nothing else it serves as a daily mirror as it forces me to confront whatever tape the market throws at me whilst living up to my own standards. Having an audience is rather unforgiving and inherently helps you to keep it real. 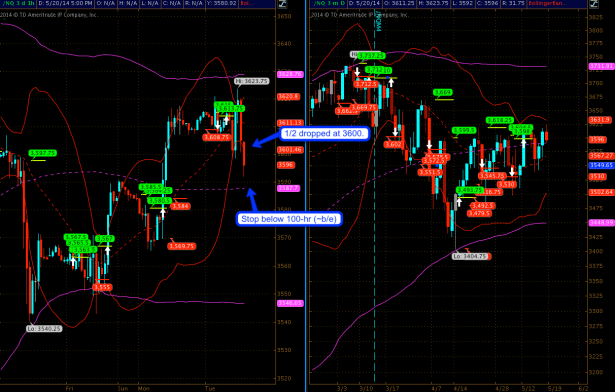 So let’s get to inconvenient truths. My NQ campaign is falling apart as I have been working my way backward. Which meant taking the second half R off the table at 3600 (the b/e point) and as it’s been dropping since this snapshot the other shoe is about to drop. I do actually like the formation here if you look at it objectively but don’t see a setup I would be comfortable taking. 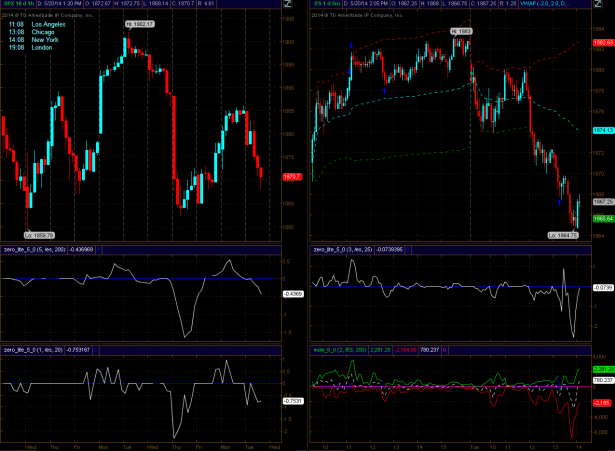 On the Zero we are starting to see increasingly strong signals to the downside. Note how the push higher was rather tepid on the signal side (left panel). However I am still split on whether we are in a medium term sideways correction or if this is a long term top. Regardless my sentiment regarding taking entries here stands as I have expounded in the past week. 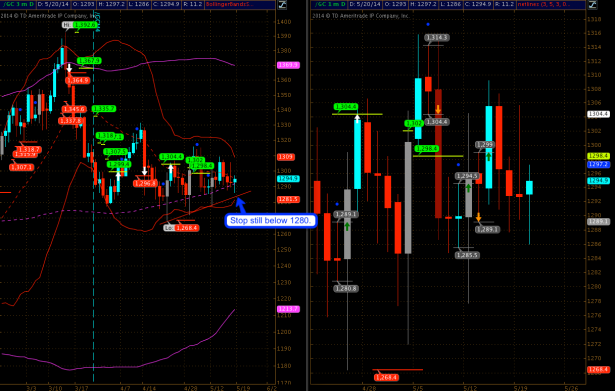 Also still clinging to my gold campaign although it is testing my patience. You recall that my stop remains below 1280 which I believe is well placed – thus far it’s been holding. I am considering a short if I get stopped out as we may see a stab lower. FWIW – this is a beautiful triangle formation with the 100-day SMA right in the middle. 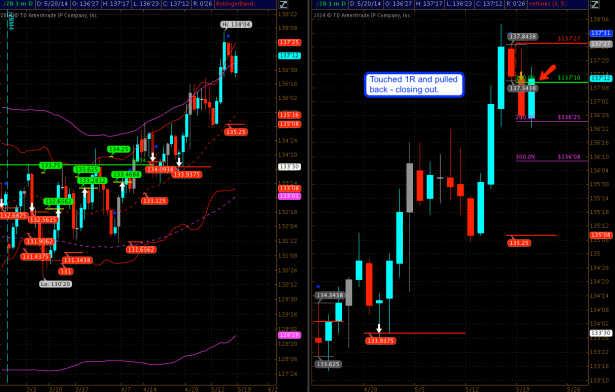 On the ZB we actually touched 1R today and then pulled all the way back. Which means I’ll be closing this one out as well – actually I already did near my entry point. Enough monkey business for one day 😉

And that’s all I got for today. During sideways volatile periods like these it’s important that we reflect on our own emotions and attempt to not act instinctively. What we all are feeling right now is confusion and probably a good amount of frustration – which is usually a good sign that the market is ready to enter its next chapter. I know that’s what I said two weeks ago and in the meantime I have done my very best to keep us all out of traps and tribulations. Similarly it’s important to not force the issue and focus on high probabilty setups which promise a beneficial risk/reward ratio. As of right now there is little I like on the equities side but that may change any moment. In the meantime we simply watch and we wait. Even this shall pass…