The tape that is – at least for the past few weeks. Gaps at the open galore followed by systematic squeezes to the down or upside – it’s a pretty nasty January we’ve had ourselves here. Which is kind of strange as on a daily basis things are looking a lot more tranquil. Once you zoom out a bit you get an idea what I’m talking about: 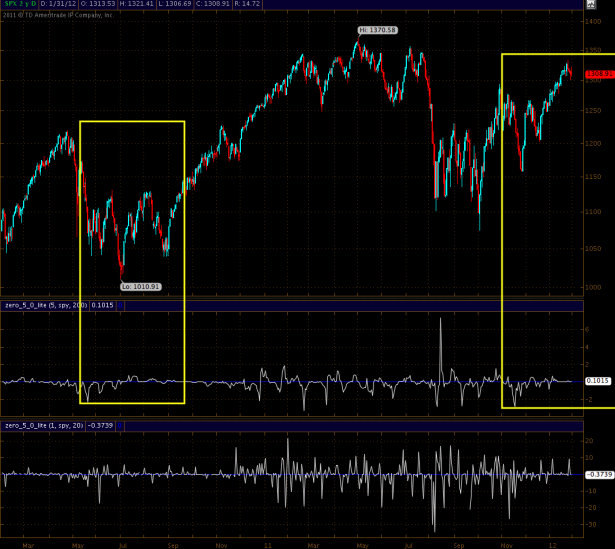 It’s been a nice 120 degrees hill climb since mid December. When I see intra-day noise coupled with long term tranquility I usually take notice. But what really puzzled me as of late was the small signal range on the hourly Zero and the Zero Lite. Which is reflected on the TOS version of my hourly Zero – see above.

Now, I started to think about what the implications could be here and whether or not things could continue to bubble higher alongside minimal participation like this. The answer to my question was delivered when parsing for prior occasions in the past. In particular take a look at the highlighted sections on the daily Zero chart ranging from May 2010 to September 2010. Back then we got a pretty thorough correction and then the signal went flat. I still remember a lot of bears getting very excited in August 2010 – which of course turned out to be the bear trap from hell. The daily Zero was spot on throughout I may add and kept us out of a boat load of trouble.

Now, as Mark Twain famously said – history does not repeat itself – but it rhymes. Very smart man and it’s a good lesson when it comes to trading as well. Look – a significant correction here is not impossible. Obviously bullish sentiment is through the roof and the ongoing correction is still a bit shallow and seems to attract intrepid dip buyers. On a very short term basis I would fade equity charts and stick with the currencies. But on a long term we continue to look very bullish here. The daily Zero is not painting any divergences and even more so – has gone flat.

A lot more charts for subscribers below – please step into my dusty lair: 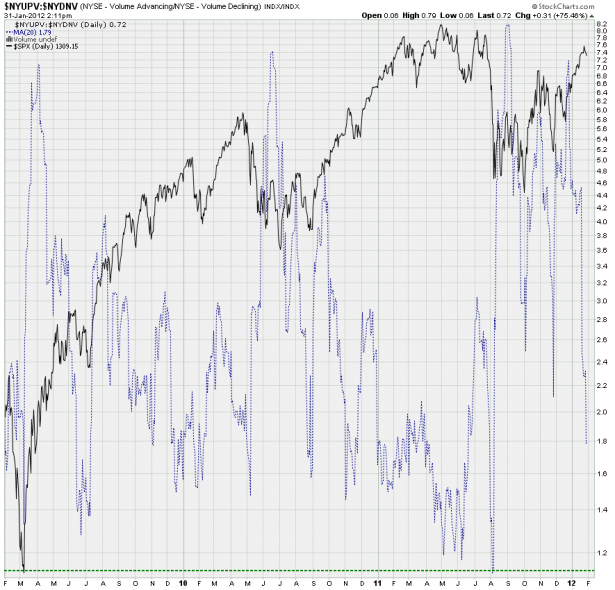 This was one among several divergent charts I presented a few weeks ago – we are looking at advancing vs. declining NYSE volume. Given a major divergence at that time a medium term correction was on the horizon. It came late in the game, which I pointed out would be an harbinger of a weakened velocity to the downside. And accordingly the bears have not been able to properly leverage their one opportunity thus far. Perhaps we’ll get Scott’s Retest Variation Sell – and that would be sweet. But even if we do I think the downside potential is limited at this point. 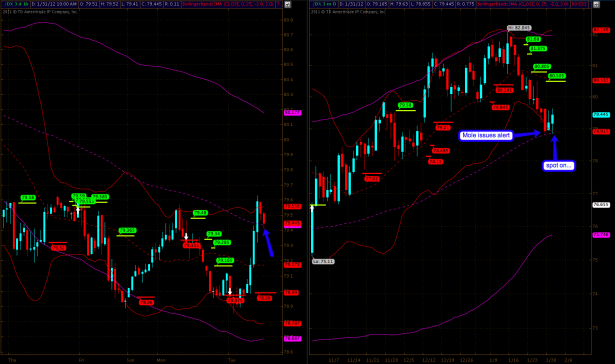 I think my timing on ole’ bucky wasn’t too shabby. It seems to be holding on its 100-day SMA and as long as it doesn’t drop below we ought to be holding here. Of course – if it does then it would give the bulls quite a bit of headwind – so I would watch this chart like a hawk. The hourly panel is rather interesting right now as we are sitting right at the 100-hour SMA. 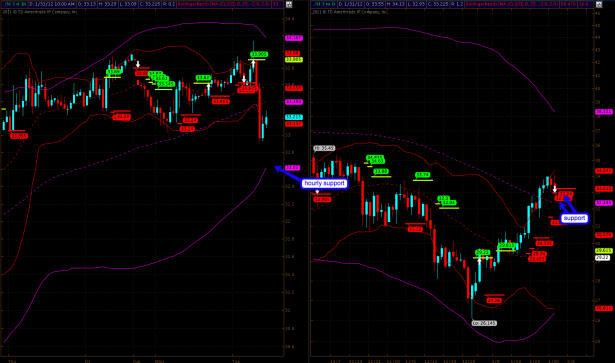 Silver is sitting at daily support right now and may be a great opportunity for a reload. Pretty low risk setup as you can set your stop below that 100-day SMA. 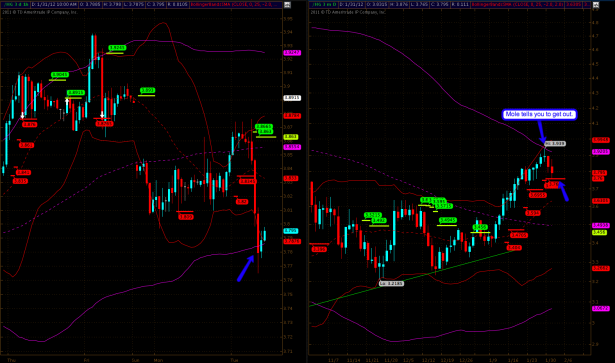 My call on copper wasn’t too shabby either. We are now sitting at the very first support in the form of an NLSL near 3.76. A breach here gets us to 3.65ish. However that hourly seems to be holding up very well and was able to stop some pretty nasty red candles. So if you are long here I would hold with a stop below that daily NLSL or below that 100-hour BB line. 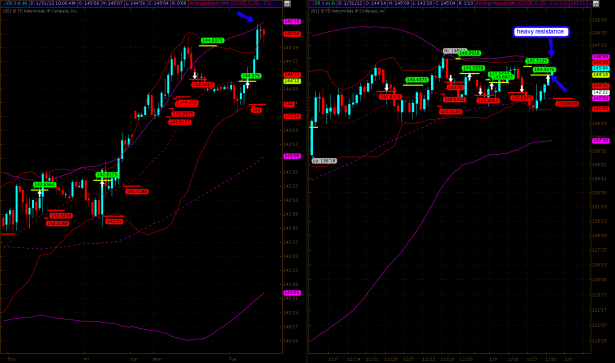 Bonds – the 30-year is looking mighty bullish and just hit a NLBL near 144’14. The only problem here is that we have some pretty mighty resistance looming not too far away starting near 145. So it’s tough to be long right now – I’d rather have it bounce its head a few times and then get a sense of what it’s up to. 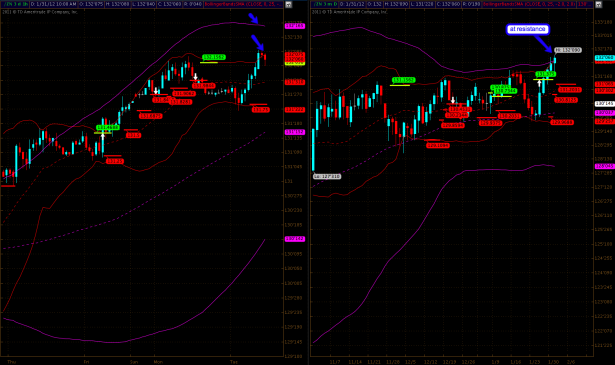 Ditto for the 10-year – now running into resistance. Those BBs are going to start lifting however and even if there’s a pull back 131’065 ought to hold and may be a good jumping board for a trend continuation trade. 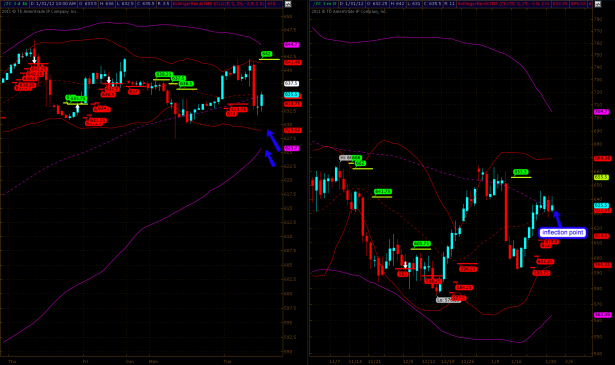 Corn appears to be sitting right at an inflection point – we have both the 25-day and 100-day SMA converge. As you can imagine a breach above would be one sweet long opportunity as there’s nothing but air above. I’d say watch that hourly support I have pointed out and be patient as this thing may flail around a bit before it makes up its mind.