Running Out Of Steam

Me – maybe a little – but most definitely this credit bubble economy: 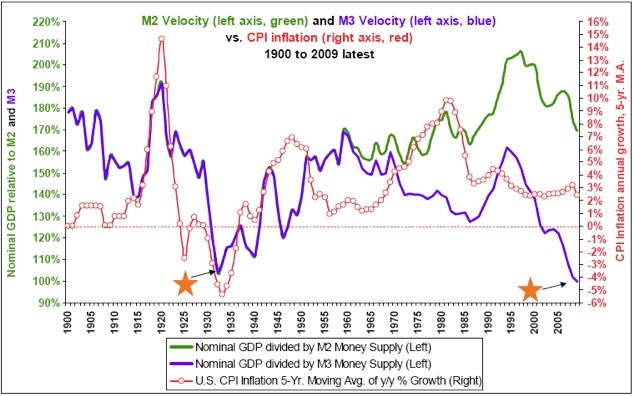 John Mauldin posted an excellent piece on the recently much debated issue of deflation vs. inflation. You probably know by now that Prechter and I are in the former camp. However many prognostications or opinion pieces on the subject matter often ignore an integral piece of the puzzle – which is that of the velocity of money – calculated as Y=MV, where Y is the nominal gross domestic product, M is the money supply, and V is the velocity of money. You can solve for V by dividing Y by M.

From the article and referring to the chart above:

Karl ‘No Slave To Fashion’ Denninger regularly talks about the very subject – and in his words:

The Fed has utterly failed to improve the real velocity of credit circulation and without it they’ve accomplished nothing.  In fact the deflationary forces are winning and will continue to do so until and unless the bad assets are flushed from the system and thus rendered impotent.

And while I’m quoting people smarter than me – Zerohedge nailed it:

Why the Federal Reserve of course, which directly and indirectly subsidized U.S. banks (and foreign ones through liquidity swaps) for roughly that amount. Apparently these banks promptly went on a buying spree to raise the all important equity market, so that the U.S. consumer who net equity was almost negative on March 31, could have some semblance of confidence back and would go ahead and max out his credit card. Alas, as one can see in the money multiplier and velocity of money metrics, U.S. consumers couldn’t care less about leveraging themselves any more.

Food for thought indeed – and the moral of the story is: As with all credit bubbles in history – they can run, but they can’t hide.