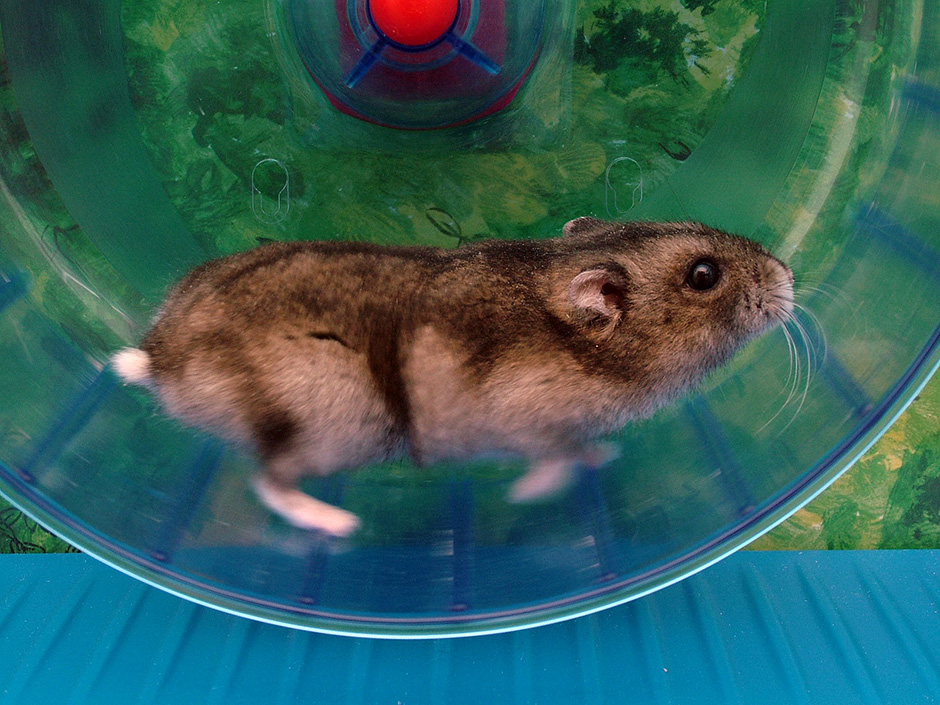 Trading near important technical inflection points has good as well as bad characteristics. Generally speaking volatility expands while price either reverses or gyrates sideways. Both scenarios (volatile-corrective or volatile-sideways) are aimed at shaking out weak hands whilst drawing in new participants. The overall medium to long term trend generally defines the characteristic and vehemence of what can be described as ‘pre-resolution tape’. 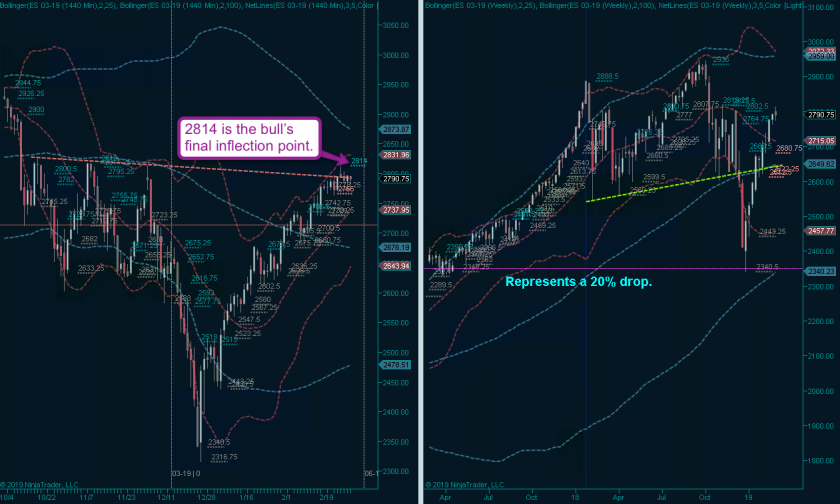 So for example in the current medium term low volatility bullish cycle we can expect either a more volatile down or sideways period. How much more volatility to expect is probably easier to predict than the direction of price action (GARCH is your friend).

Until price has arrived at a resolution threshold, in our case ES 2814, odds support quite a bit of monkey business in the days to come. After all it’s only been a few sessions since we touched 2800 and market makers like nothing more than a bit of FUD (fear, uncertainty, and doubt) which especially retail traders are always eager to deliver in spades.

Let’s Dumb It Down

Basically the easy leg of the journey is officially over and every handle higher until ES 2880 will be fought over. And if nothing else our volume profile chart offers us a clear perspective of the front lines: 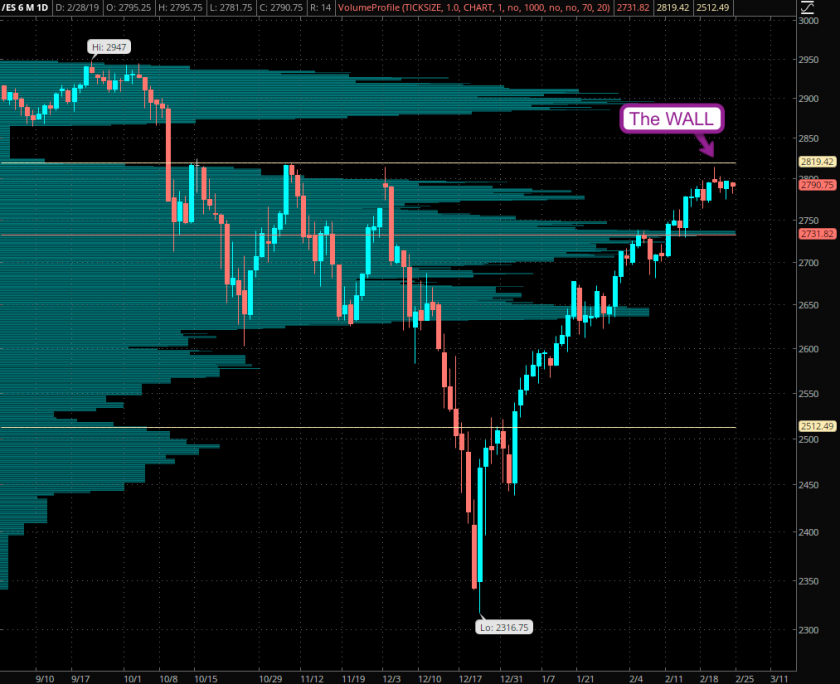 ES 2820 henceforth shall be known as THE WALL and until it is breached we need to hunker down and preserve resources. Attempting to guess where we’re heading next (i.e. up/down/sideways) is foolish as we just don’t have enough information.

My favorite scenario actually would be a down leg to about ES 2650 which would scare the jeebies out of everyone and permit us to re-load some long positions at discount.

The NYSE UVOL/DVOL ratio chart also supports this perspective. Buyers are pushing but the wall ain’t budging – at least for now. 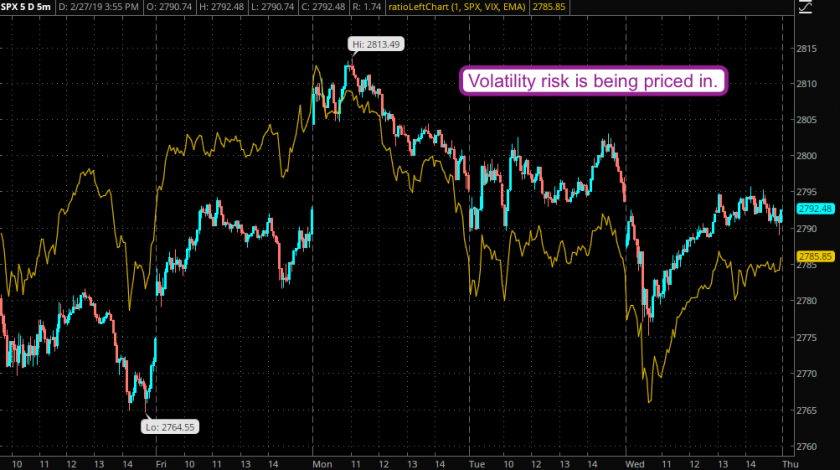 Not surprisingly volatility risk is being priced at a slight premium. It started on Monday and seems to be exacerbating. I’m not sure if that is any indication of more downside to come but be aware that if you are buying calls right now you will NOT see much of a change in premium if equities start pushing higher.

Which is an aspect of option trading many fledgling participants have a tendency to oversee. With the VIX still near the 15 mark there is significant room for it to drop even lower should equities suddenly regain their mojo. So if you’re pricing your profit potential make sure you account for at least a 10% to 20% drop in vega.

Obviously if you’re buying puts right here then you’re banking on the opposite scenario, but keep in mind that you will feel even more pain if price runs against you only by a few handles (especially OTM puts). For example a push into ES 2880 isn’t that much in the great scheme of things but it is the perception of risk that is reflected in option vega.

At this particular stage I think the best strategy is to hunker down and simply wait. IF 2880 has been conquered I expect a retest but at that stage the entire dynamics of the market will have changed and BTFD entries once again will be permissible.

As I already mentioned a dip lower into previous support ranges is my favorite scenario from a sheer entry taking perspective. I love myself them juicy dips! But of course that would punch up IV (and vega in options), so if you’re thinking of simply buying calls then think again.

Given that scenario a simple vertical bull spread in the Spiders would do the trick whilst mostly (but not entirely) insulating you against volatility crush and limiting your downside. Of course it also limits your upside as there is no such thing as a free lunch. 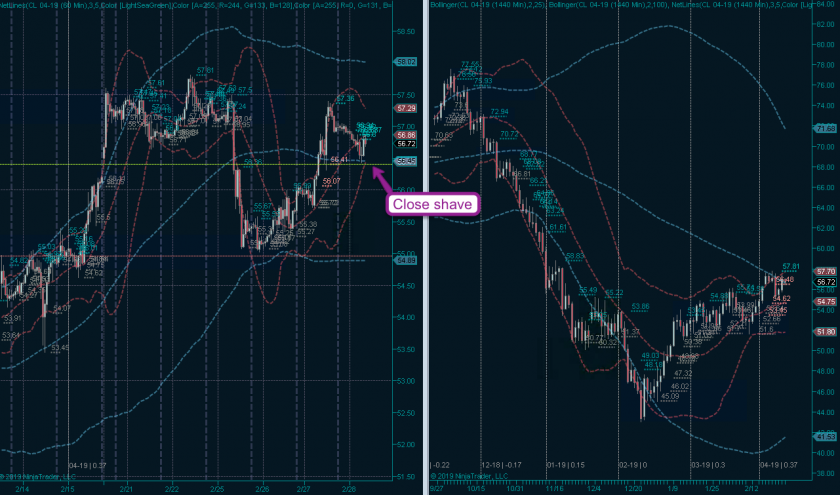 Close shave on our crude campaign – my stop was a few ticks below and thus it survived the night. Doesn’t mean we’re out of the woods here just yet though. 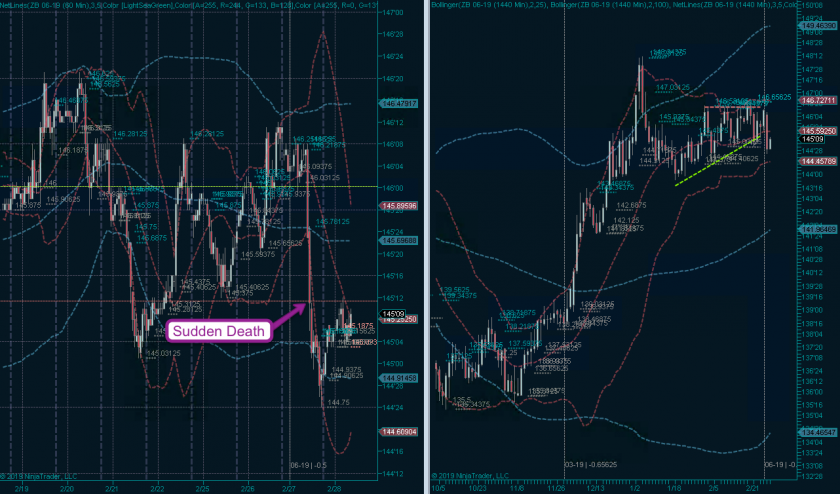 Sudden death syndrome in the ZB campaign. Not sure what happened there but it wasn’t pretty – stop out at ISL. The current formation looks like things are going to get more complicated on the bond side as we are looking at a more extended period of consolidation. 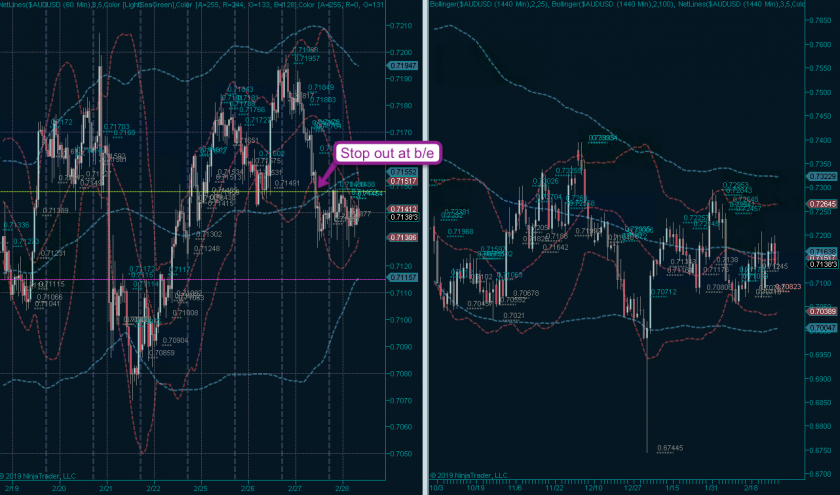 Stop out also in the AUD but at break/even. Fortunately it had touched 1R thus allowing ISL to be moved up. 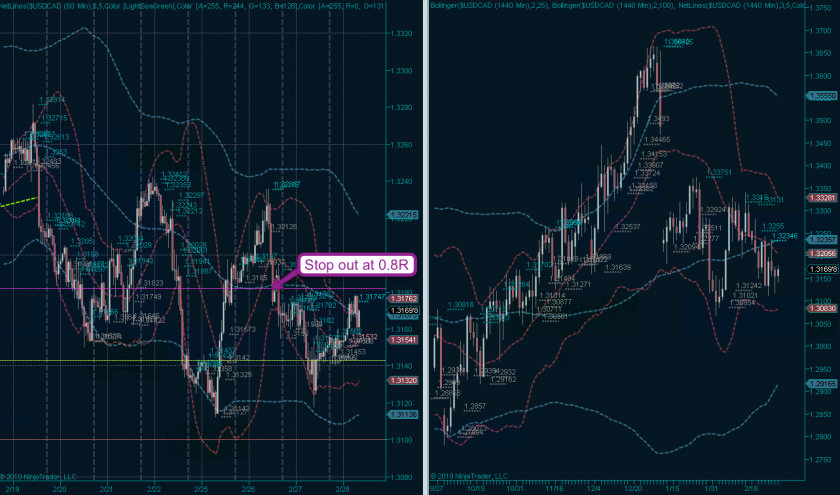 USD/CAD also stopped out – however at ~0.8R. Better than a kick in the shin I’ll say. A re-entry is actually on my radar but I’ll have to monitor the situation a bit more for now. 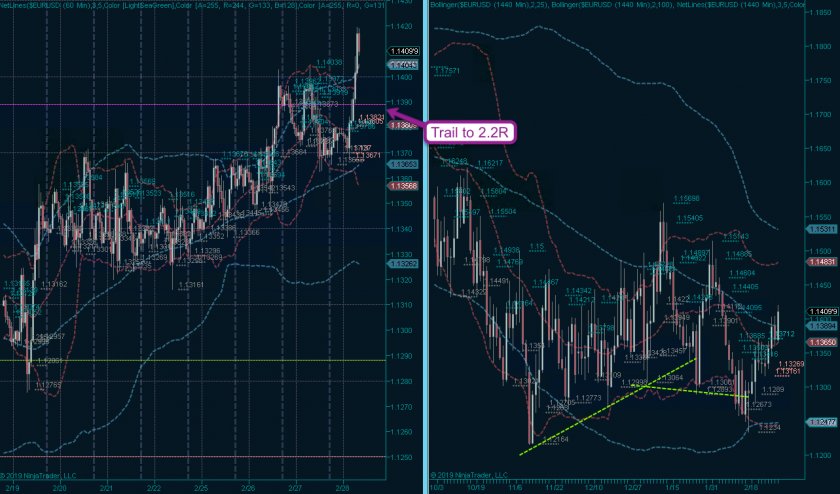 And of course the one that banked the most coin is my old nemesis – the EUR/USD. I just recently bought a bunch of gear and cleaned out the local ATM, well anticipating that we’d soon see a jump in the Euro.

My trail is now at 2.2R but still about 0.5R from MFE as I am anticipating a bit of a retest after such a steep move higher.