When one has spent any considerable time in the financial blogging racket invariably a few basic lessons will have to be learned in order to assure long term survival. Many oh so promising analysts or chart jockeys try their luck in launching their own digital den, perhaps even manage to accrue a respectable audience and eventually some prominence, only to eventually meet ignominious demise upon encountering the brick wall of blogging exhaustion. Trust me – I have been there – and once was only a few inches away from throwing in the towel. As it so happens the Mole has suffered more genetic damage than most which however aided him in offsetting any blatant lack of talent with sheer tenacity. Anyway, here’s are the thre lessons I’ve learned.

First and foremost – don’t let the bastards grind you down. Thanks bono – that was actually one of the big ones for me and fortunately I started to develop a bigger (but less shiny) coat after a few years. The financial sphere is littered with opinions and you know what they say: They are like farts (and have about the same value). So hard to hold em in. When one slips, everyone’s gonna know it and at least one person is gonna leave the room.

Second – and that is one that became a bit of an epiphany or so about a year in: Most retail traders do not understand the difference between a setup and a prediction. So let’s just assume we’ve got a retest variation sell on the SPX today – which as coincidence would have it would be the case today: 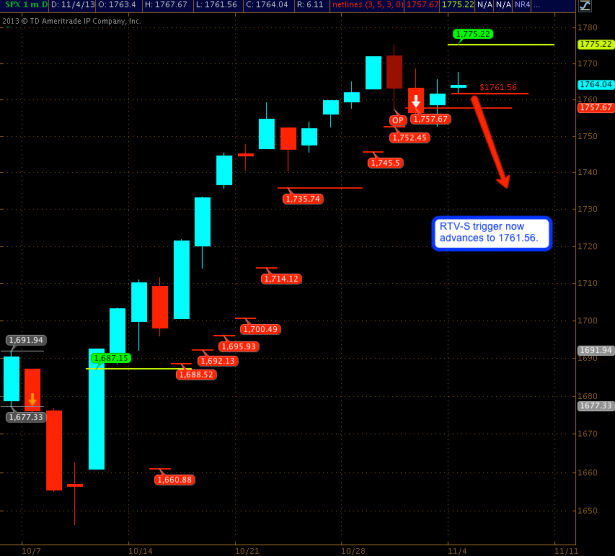 From a professional trader’s perspective we had a short setup at Friday’s lows today. Since we climbed one more candle (assuming we close that sideways chopfest as is today) this means that the RTV-S trigger now advances to 1761.56 (or whatever low we’ll paint today) and will be valid throughout tomorrow. That is it – a setup – nothing more and nothing less. And given the tape of the prior weeks the probability of it triggering and then resolving successfully is probably rather low. Does that mean I would not take it? Absolutely not – a setup is a setup.

But wait – not so fast. If you post this on your blog (which I coincidentally just did) the majority of retail rats are going to read it and then take away the following: The Mole thinks that prices are going to resolve to the downside – the Mole has turned bearish.

Look folks – there is a difference between a setup and a prediction. The former is what professional traders look for – the latter is what retail victims look for. The former exists – the latter only exists in your imagination. Because you care too much. And you cannot embrace chaos and ‘not knowing’ as a part of your trading existence. That is your problem – not the market’s. Ask yourself this – how well have the combined weight of all the predictions you have encountered in you time worked out for you? Made your millions yet? Yeah, didn’t think so…

So I don’t think I have to keep beating this dead horse – hopefully the point has been conveyed and perhaps will take seed sometime within the scope of the unfolding decade. If not then best of luck to you sir, and welcome to the other side of my trades.

Oh yeah, and third – you are only as good as your last trade. Trading is a bit like joining an AA group. Don’t think for a second you can ever be cured of your cognitive biases and you are only one trade away from reverting back into the hopeless emotional sack of excrement you turned into when you wiped out your first account back when. What you’ve learned since then (and what kept you going) wasn’t really so much about the market. It was about you. Because it’s you who is the problem. The market is rather happy without you futzing around and spewing about opinions. So get over yourself and focus on executing each trade with razor sharp precision. The system is the system is the system. No excuses and there are no bad guys. Oh yes – there’s one – guess who? 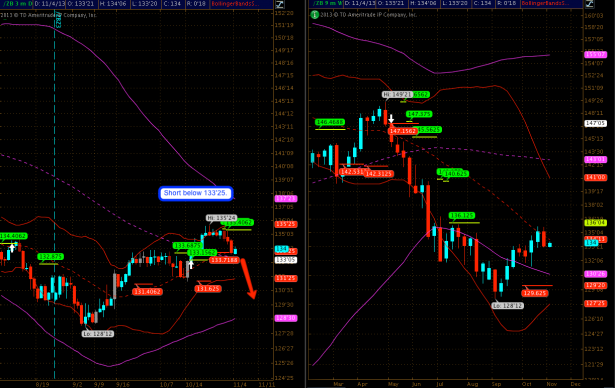 Anyway, that brings me back here. There’s not much I would touch with a dog poop collector today – a glance across the board instills the distinct impression that market makers are happy to give both sides a good whipping. Bonds futures may be the exception as I’m seeing a short setup here assuming it drops below 133’25. That 25-week SMA may hold up. A long is possible but not before 135’25. You can use both inverse as your stops.

That’s it for today – have fun but keep it frosty.