I leave town for a few days and not only do you guys let the market go completely out of control – you even let a troll pollute the airwaves for several days. Glad I decided to come back early – it’s time for Mole’s iron broom to scare out the cockroaches. 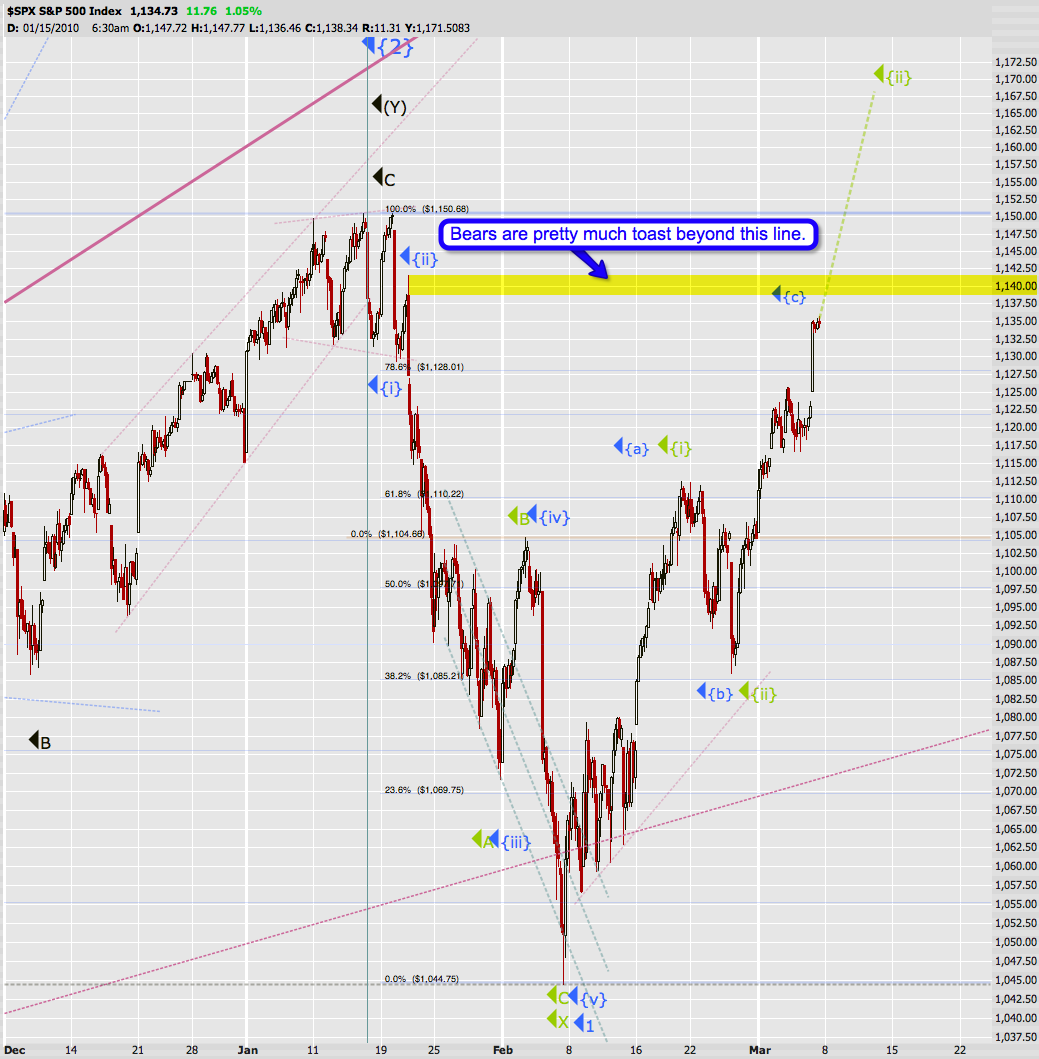 Boy, my wave count is not looking pretty – this is either going to get really really ugly for the bears or it’s going to be an ass whopping of biblical proportions for the bulltards. Yes, we all hope for the latter but we may have to face reality in a few handles from now. Remember what I said two weeks back about the third wave to the downside which suddenly turns out to be a c wave? Well, thus far that very nightmare scenario seems to be playing out – to the chagrin of anyone holding long term puts (yours truly included).

Soylent Blue is barely hanging on and the wave count on green now points towards a very massive third wave developing – not a pretty picture if you’re short. 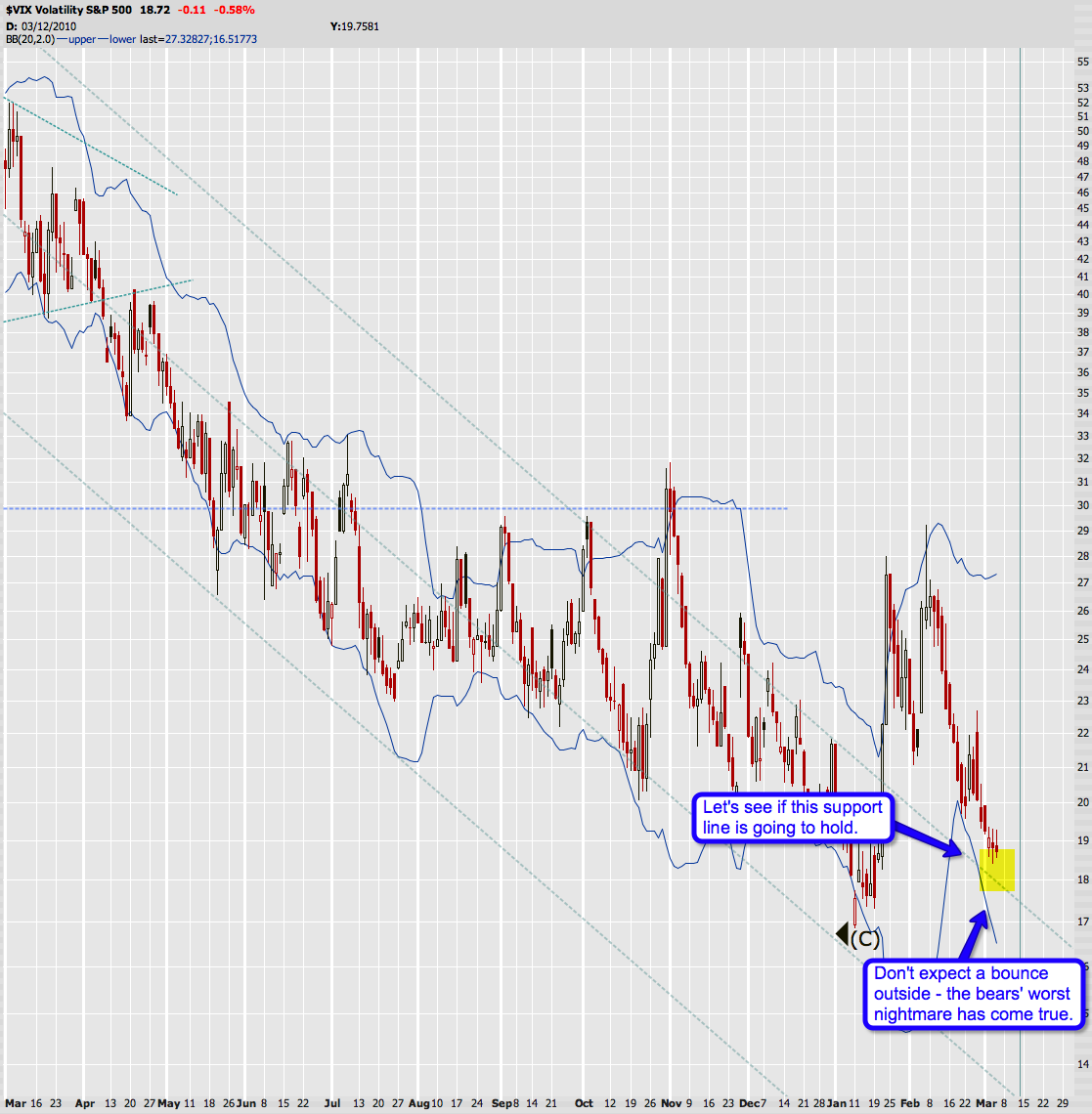 Also remember what I said about Mr. VIX? How the 20 day 2.0 BB was starting to expand to the downside as the bears missed one opportunity after the other to reign in the bulls? And how we might have to watch the VIX stroll down the lower boundary day after day without ever pushing to the outside? That’s exactly what happened and consequently Vaseline jars are flying off the shelves faster than Ben Bernanke can print coin to actually pay for them. Hey, if you live in West Hollywood you might actually enjoy a good anal plowing – for the rest of the bears it’s been nothing but pain and frustration.

UPDATE: After posting this Mr. VIX actually dropped through that support line like a hot knife through butter. We are now approaching the January 11 lows – if those don’t hold the bears are in a world of hurt. 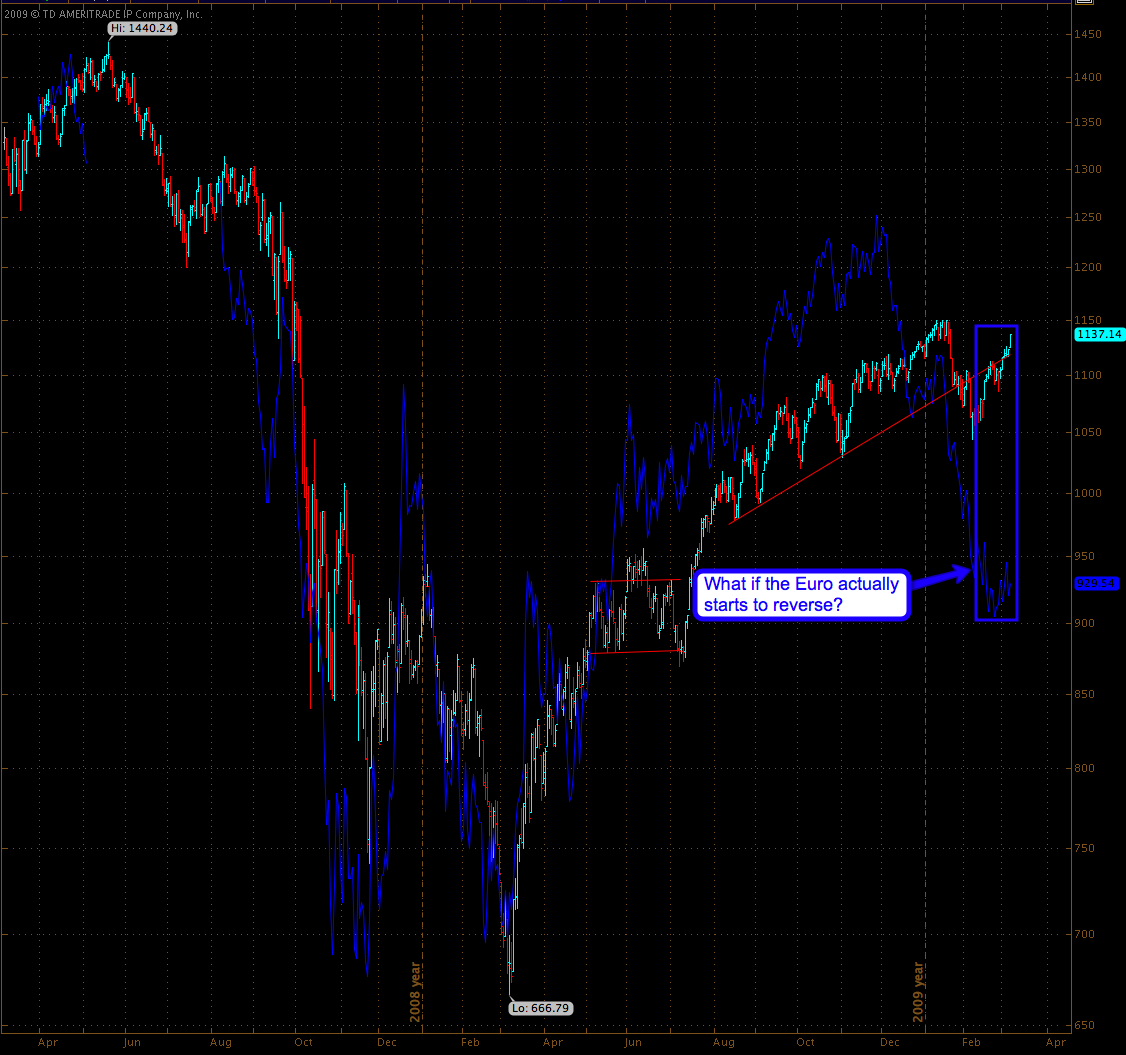 Meanwhile I’m watching the Euro futures not catching much of a break and I can’t help but think: What is going to happen when the Euro is actually starting to rally? Shudder…

Mr. Zero is solidly bullish and NYSE A/D ratio today is probably going to close above 4.5. The McClellan is still climbing – not much of a divergence here – what I saw last week has been reversed. 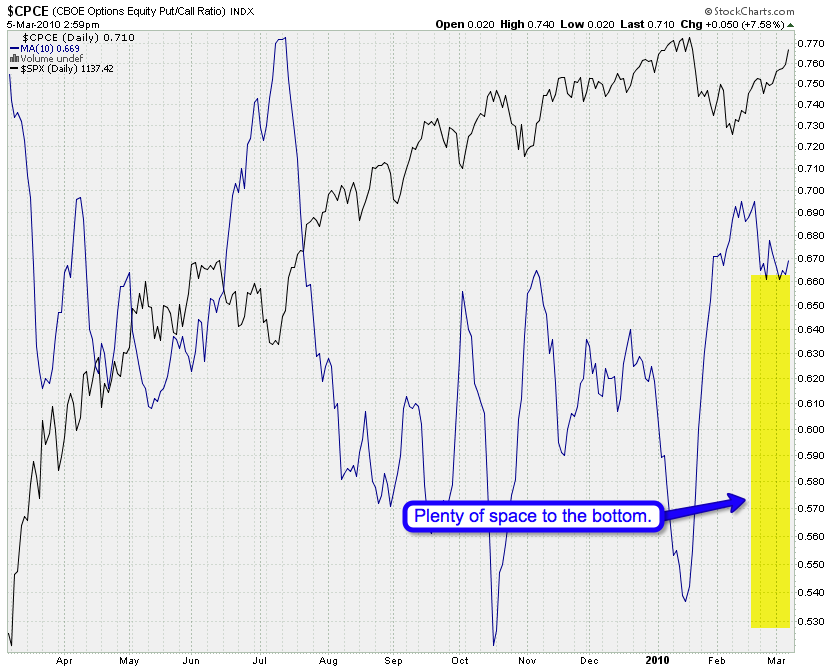 My CPCE chart is also looking pretty scary – all that upside progress in equities and we barely dropped – there is a LOT of space leading to a bottom – it’s looking bad for the bears, folks. 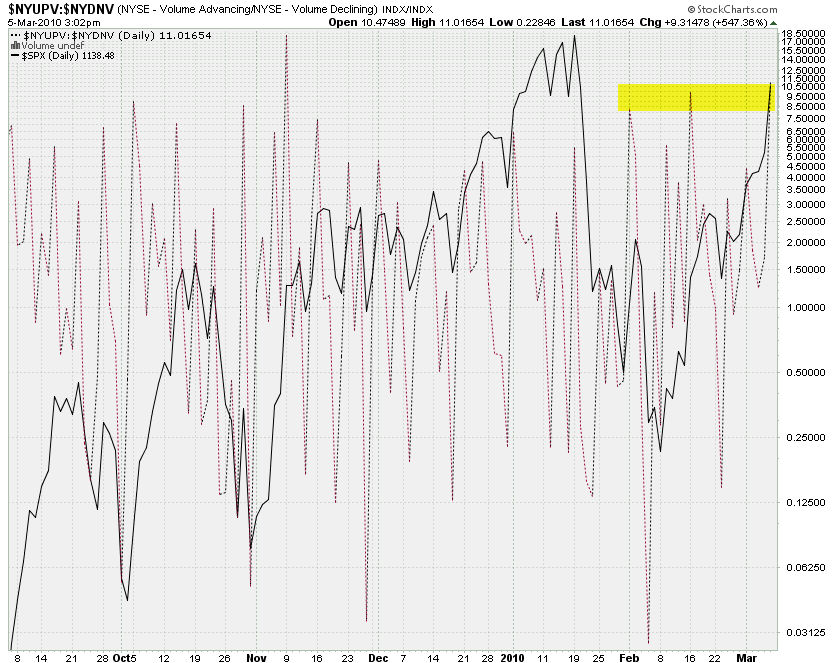 My ADV/DEC ratio chart points towards a possible short term reversal next week – might be an opportunity to scale out of short term puts if you’re holding those.

Not sure what to tell you boys and girls – but I’m not seeing a market ready to turn. I hope I’m wrong – I really do – because I’d be rather wrong and rich than right and stopped out. In case you want to know – my stop for my long term puts is the 1,150.45 high – after that it’s Soylent Green all the way.

Bottom line: Equities need to turn right now and here – once we breach that 1,140 mark it’s game over for the bears.

Good news: Geronimo is doing very well lately. We got stopped out three days ago after being one tick away from our target. So, I’m thinking of adding a special filter which accounts for a rare case in which the trade was right but the target was wrong. When we are so close to the target and then turn it’s obvious that the big boys took their profits and the trade is over – in which case it’s smart to not force it and get out at break even (or slightly above). Otherwise Geronimo has been kicking ass and taking numbers – I will probably post some charts over the weekend.