Shut The Door Have A Seat

Most of you steel rats are probably under 35 and hence your brain is wired quite a bit differently from that of your parents or grandparents. Let’s face it – you are all ADHD inflicted information junkies on a high sucrose info diet who can’t sit still for five minutes without as much as glancing at your fucking mobile phone. You are a bonafide information junkie and should you ever have the misfortune of finding yourself stranded in a barren desert (without cell reception – the horror!) you most likely will die from info-deprivation long before any signs of dehydration set in. Yes, you are on the move – you live on the edge – nothing escapes you – every minute of your waking hours is accompanied by a never ending stream of data keeping you up to date, in touch, and well informed. You are a black belt master of the info universe and the more you know the better.

Well, guess what – when it comes to gaming the market – you are in the way. So shut the door, shut your trap, and have a seat!

One of the most famous and at the same time most ignored Livermore quotes quite succinctly captures my outlook for the next few weeks:

After spending many years in Wall Street and after making and losing millions of dollars I want to tell you this: It never was my thinking that made the big money for me. It always was my sitting.

Spot on. Here’s another one, which speaks to the lack of patience, a quite common affliction back in days and even more so today:

The market does not beat them. They beat themselves, because though they have brains they
cannot sit tight. Old Turkey was dead right in doing and saying what he did. He had not only the
courage of his convictions but also the intelligence and patience to sit tight.

And finally – one of my favorites, as it debunks an old myth I never bought into:

They say you never go broke taking profits.  No, you don’t.  But neither do you grow rich taking a four-point profit in a bull market.

I could go on as there are plenty of classics to pick from, but I’m sure you’re getting the point by now. So beyond my rehashing of old Jesse quotes – what’s all this about?

Well, the financial markets have a knack for bringing out the worst in people and although there are many vices and cognitive biases to pick from one stands out among all others, and it’s a systemic lack of patience. Quite frankly, the final lesson the next six months will teach you will be to do nothing, nichts, niente, nada, zilch. Am I coming in loud and clear? 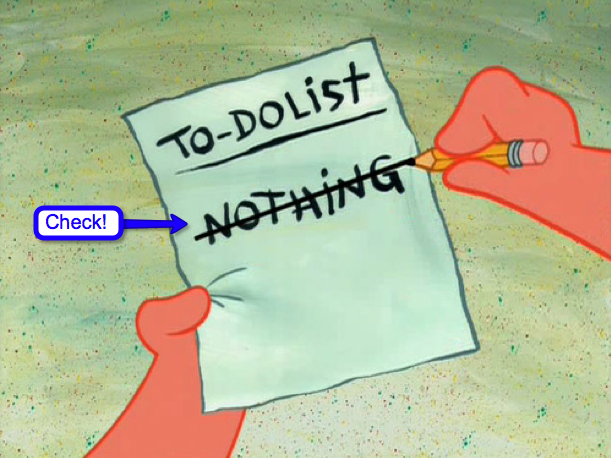 It should be so easy to do, right? Just get positioned and walk away, then cash out and focus on getting lap dances from the gold digger of your choice. Turns out it’s one of the hardest things to do and the need ‘to do something’ kills traders on an ongoing basis. Of course this has always been a case, but overcoming this mental trap will be essential in making it through what we currently count as Primary wave {3} of cycle wave c. 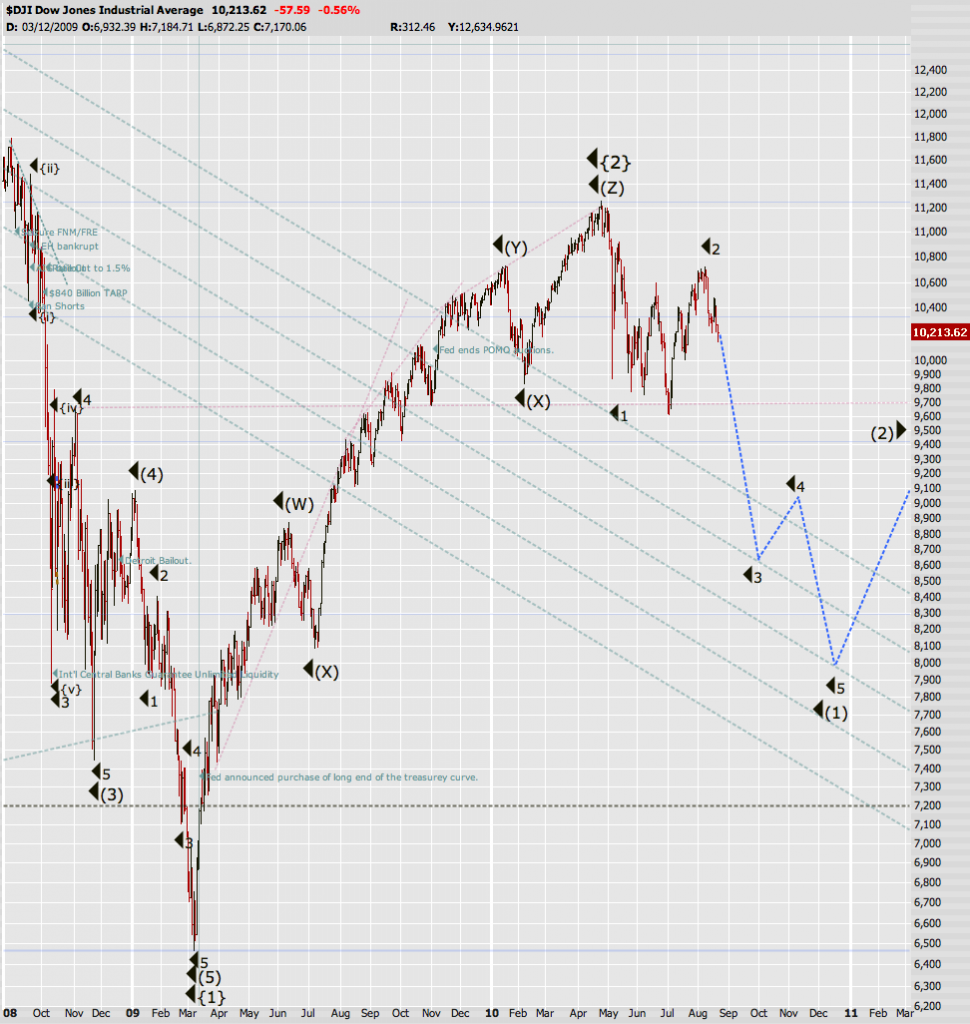 A new glance at the long term picture – now you know why I bought December puts. The long term wave count has us moving toward a mudslide that will quickly separate the bulls from their ill-gotten gains in a pretty scary move – one that should unfold over the next two months. Yes, it’s pretty much black&white at this point and the wave count is only giving me two distinct choices. Either we slide – and that hard – or the count is wrong and we’ll get something completely different Monty Python style.

As you can see we are currently in the humble beginnings of Minor 3 of Intermediate (1) with a rough target of in between 9,000 to 8,500 on the Dow. On the S&P 500 cash this translates to roughly between 975 to 925 – give or take a few panic sessions. Since we had a pretty complex and tormented correction we should then see a zigzag (or flat) to the upside followed by a slide to 8000 on the Dow. Some fellow Elliotticians may disagree here, rightfully pointing toward the current flat as being ‘simple’ – thus something more complex could transpire (which for us traders translates into theta burn and sideways strategies). Well, I am pretty open to that and my current POV on the subject is that we’ll cross that bridge when we get there. 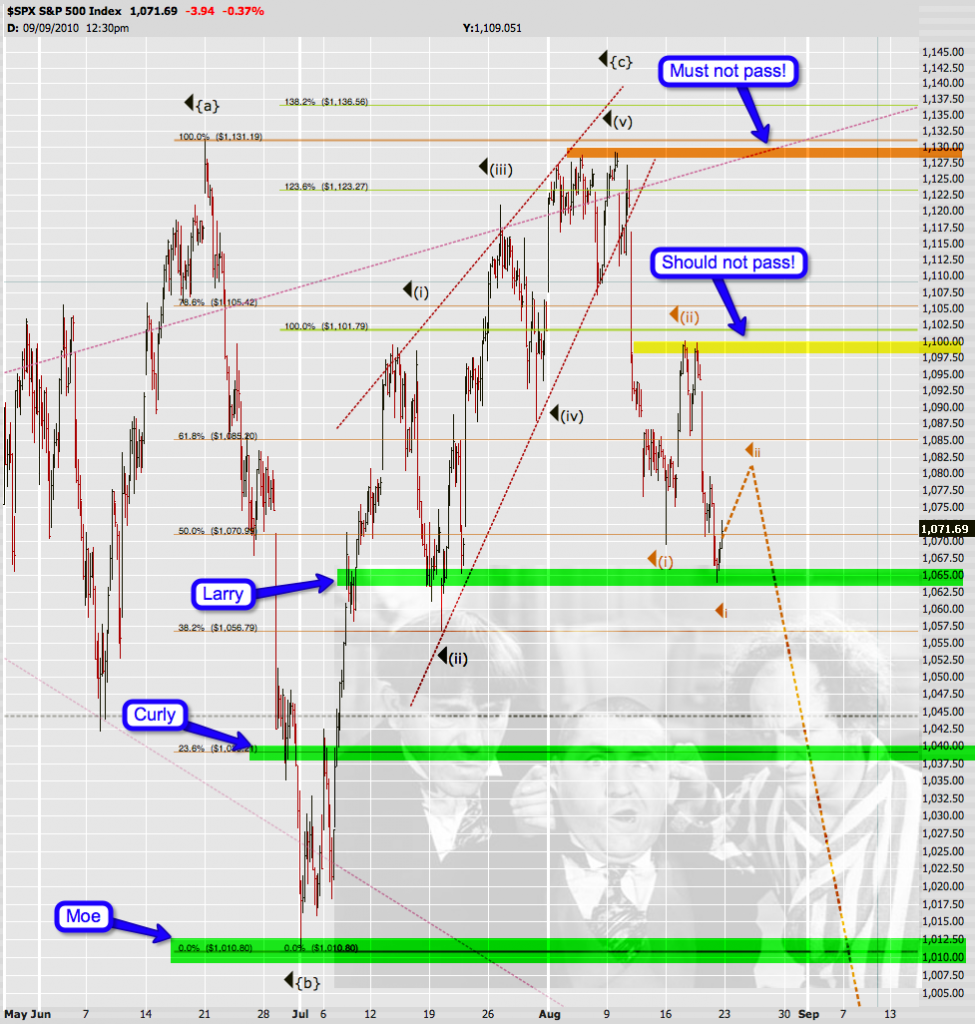 More medium to short term we have quite a bit of work ahead of us. In order to even think about any significant downside we first need to overcome the three stooges, with Larry spoiling the fun at 1,065, Curly ready to cause havoc at 1040, and Moe to whip you into submission at 1010. Once we’re clear those three things should accelerate quite nicely to the downside.

If we push up in the coming week – and as you can see a little correction is expected – we should however not pass SPX 1,100 – although it would not kill our overall wave count as we could still paint a running or expanded flat of some sort (although rare at this stage and after an ending diagonal). However, the line we must not breach is 1129.24 – that’s our line in the sand. If that happens then it’s most likely back to the ole’ drawing board for Mr. Mole as the medium term scenario would lose a lot of credence.

As a side note – the preferred scenario at this point is for this current wave to keep sub-dividing, which would lead to an acceleration to the downside. This implies that any upside correction should be quick and relatively shallow. If we hang around too long here or slowly crawl up for weeks on end then there is probably trouble in grizzly paradise.

As per additional evidence: I could post dozens of charts this weekend but decided against it as there is not much additional that I have not shown in prior updatest. Most of my long term charts continue to strongly point toward a deep drop to the downside. And the short to medium term charts are a bit mixed but do entertain this outlook. So nothing new to work with and thus there is nothing new for us to do except for doing nothing (see above) and wait things out.

If it happens it will happen soon – until either proven wrong or right there is not much to do right now. You can play the swings Zero or Geronimo style a little if you like, but don’t get too overzealous and caught up in the daily gyrations. If we get what the charts are proposing the long con is the right play here.