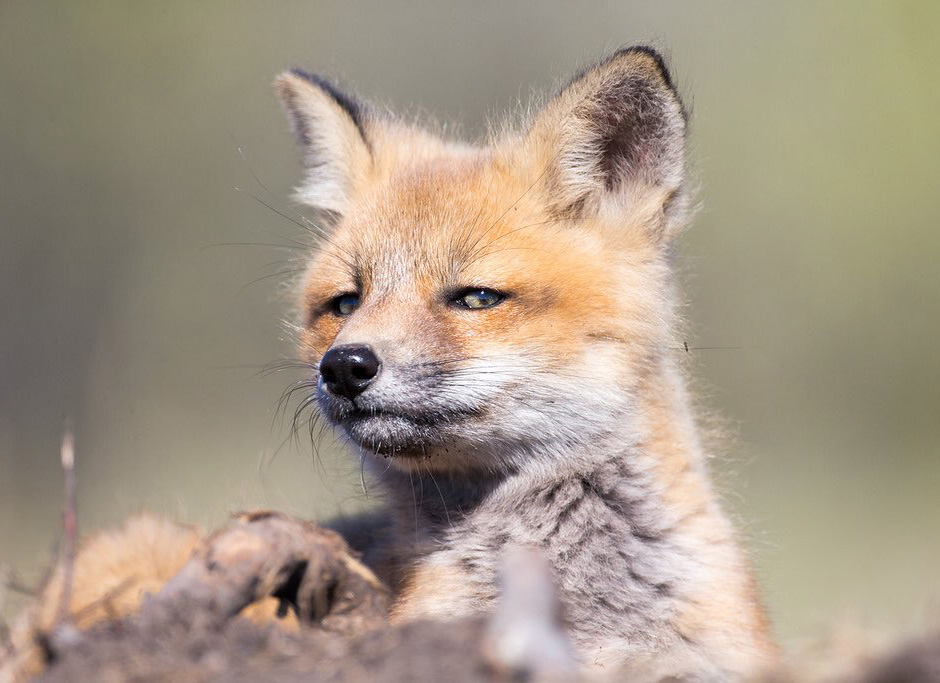 Something doesn’t add up here. We got our VIX Buy Signal confirmation and that is short to medium term bullish for equities (again, the buy refers to the latter, not the former). However I’m smelling a potential rat as the Dollar finally looks like it may be ready to squeeze the heck out of the shorts. And usually that is not exactly bullish for equities, is it now? Let’s look at some key markets and then decide the best course of action: 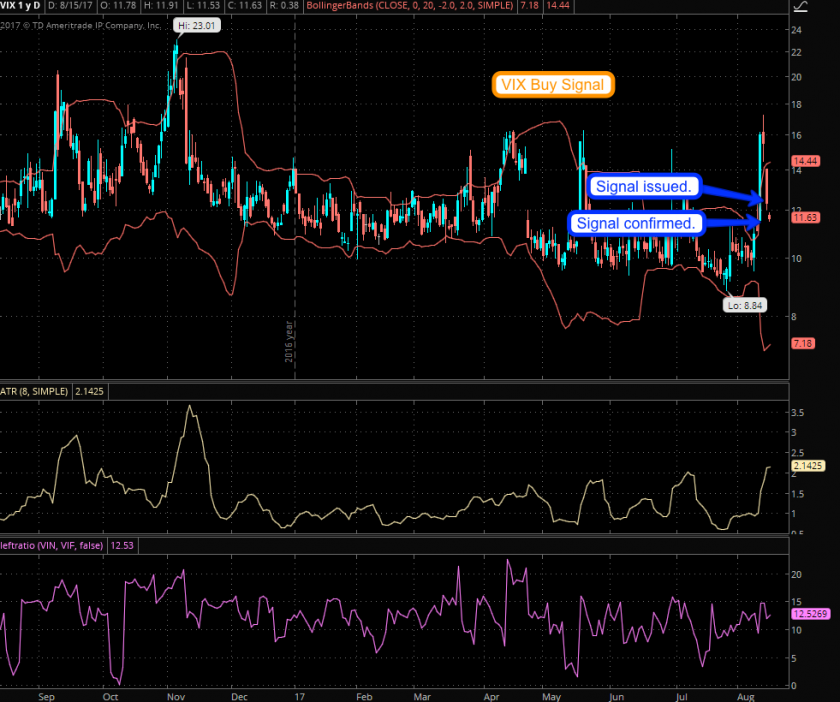 Alright, so there’s the lower close on the VIX which, per the rules discussed yesterday, officially puts a confirmed VIX Buy Signal on the map. No, there won’t be a parade, sorry. First up it’s too hot and because of Antifa I can’t afford the insurance. 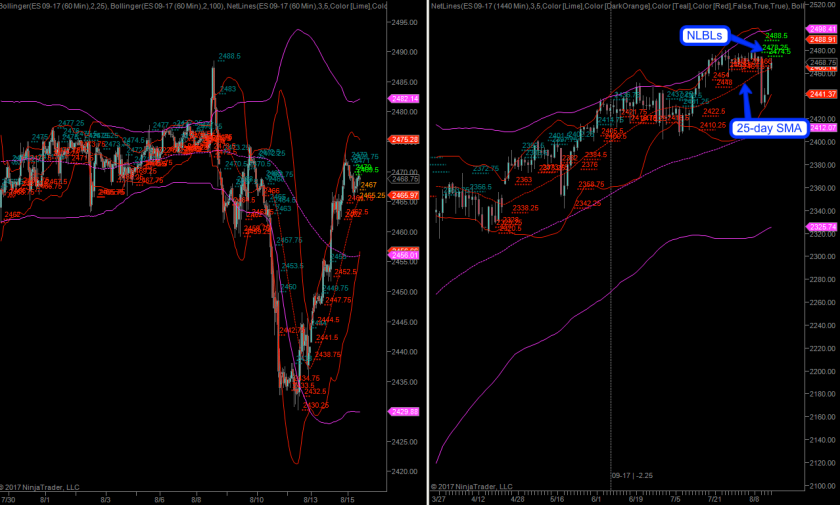 The E-Mini looks as bullish as it looked bearish late last week. Even in a bull market it’s rare to see such a systematic squeeze higher. Clearly this was nothing but a very convenient shake out courtesy of nuclear Kim Jong Boom clickbait. 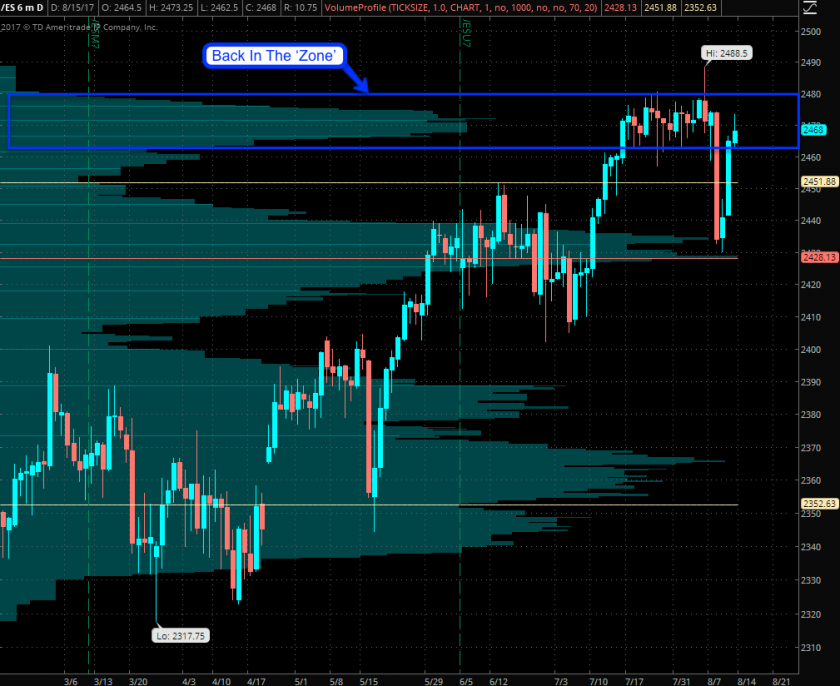 The volume profile has us back in the old ‘shake out zone’, meaning the volume hole between 2450 and 2460 was successfully breached on Monday. 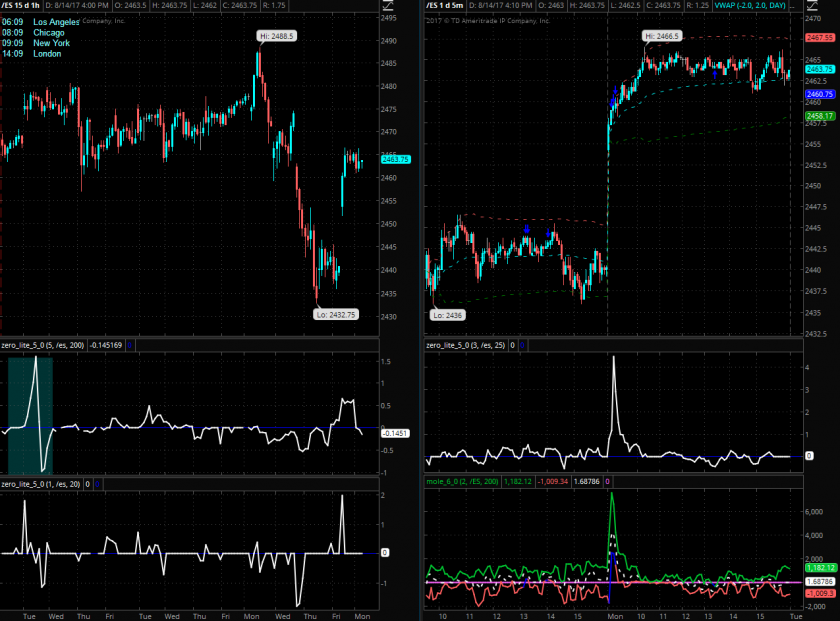 Participation gently pointed higher last Friday and I’m sure you recall the Zero plotting in the positive all session. Which continued yesterday but almost without any participation.

And here is where things get a bit iffy. NYSE DVOL was completely flat yesterday, I don’t ever recall seeing such a lack of selling interest. The two charts combined strongly suggest that yesterday’s buy spree back was purely institutional, retail got a good ole’ fashion kick in the nuts here – twice. 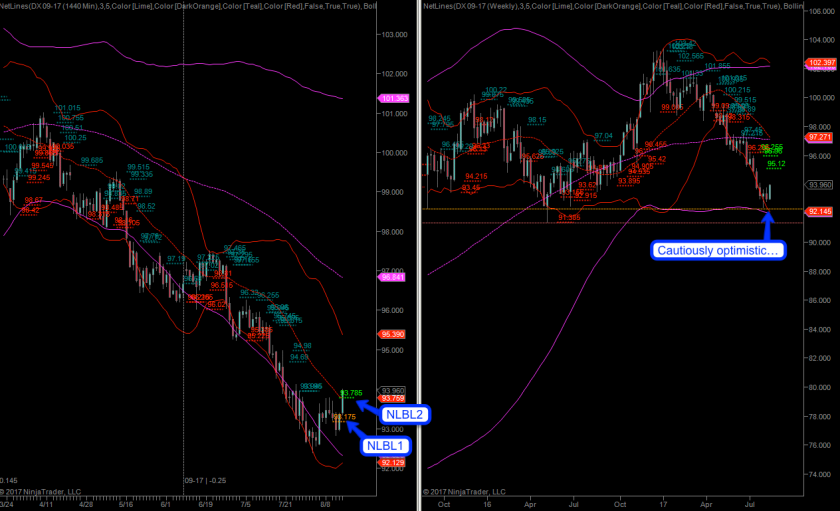 Now here’s the Dollar which has managed to overcome two consecutive NLBLs after touching a long term inflection point near 92.1. I would usually label a formation like this as bullish as f### and then look for entry opportunities. 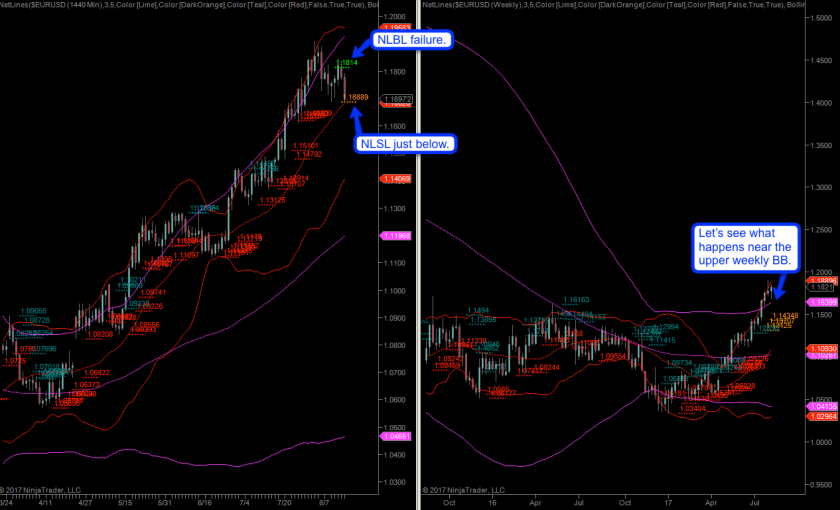 And it’s not just all smoke and mirrors, the EUR/USD is now in a corrective pattern and after a failure to overcome a daily NLBL it is now heading toward a NLSL near 1.1689 and change. However there is the matter of that 25-day SMA plus the upper 100-week BB, which without doubt are expected to put up a bit of support. 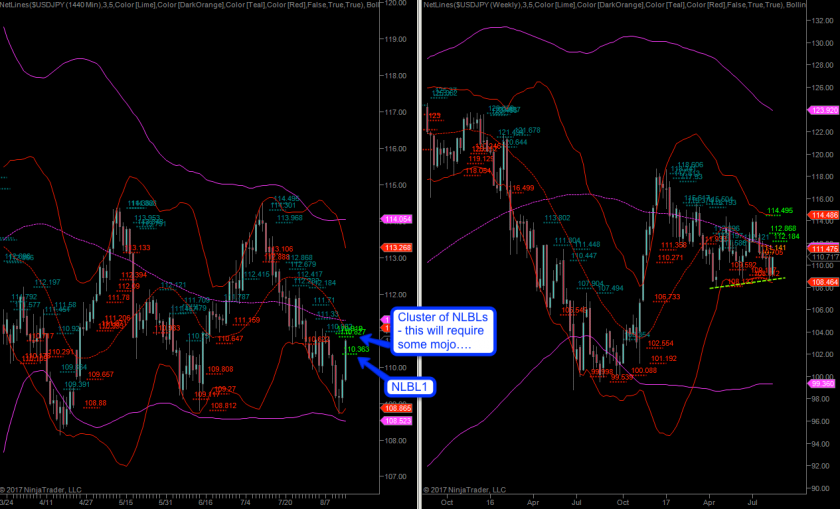 The USD/JPY is also in the process of bouncing after approaching what traditionally is BOJ Defcon 2 levels. It managed to push through its first daily NLBL and is now pushing into a whole cluster of Net-Line-Buy-Levels starting at 110.827. 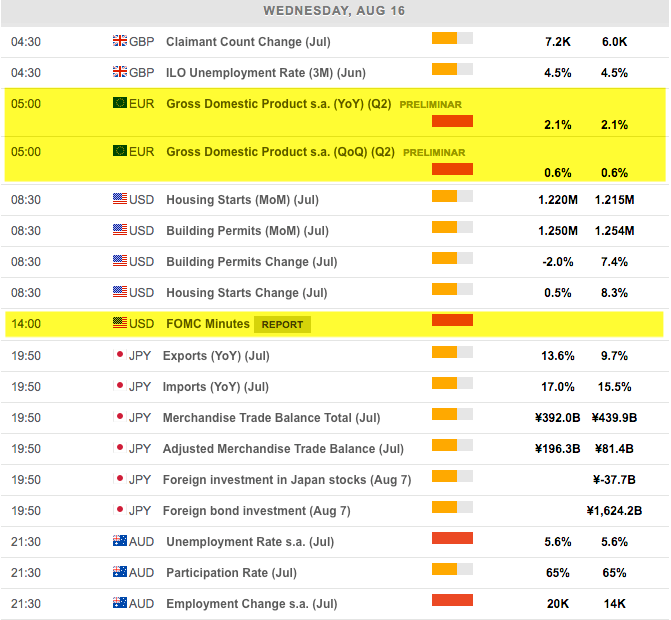 Of course I kept the best for last, which is tomorrow’s event calendar. When you guys back in the U.S. are still in deep slumber Europe is getting its Q2 GDP reports. And if those are positive then I’m sure the Euro is going to punch higher and stronger than Wladimir Klitschko in his prime. He will be missed by the way, what a fight but it was clearly time to hang up those gloves.

And then at 2:00pm Eastern we’ll be blessed with the FOMC minutes which are a complete mystery at this point. Who knows what the Fed is going to do this time and the slightest bearish sounding soundbite could send the Dollar back into a tumble.

We are dealing with a pretty fluid situation here which depends on variables we have zero control over. Under normal circumstances I would suggest a binary setup with distinct inflection points but given this particular furball I think it’s best to remain on the sidelines until we gain a better sense of the situation. If you think you have a good handle on what both the Fed and the ECB are going to deliver tomorrow then a lottery ticket may pay off handsomely. Puts would be good for playing the short side and perhaps a bull call spread on the upside. Volatility has dropped quite a bit again, so the risk of getting vega squeezed has diminished somewhat. 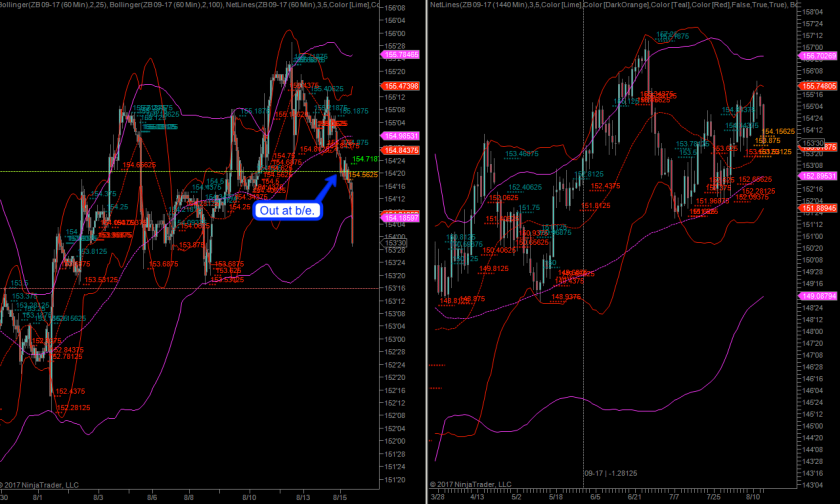 Bonds are also falling hard since yesterday which resulted in my campaign getting stopped out at break/even. I think I actually got pretty lucky there and got away clean per the rules, so no regrets. 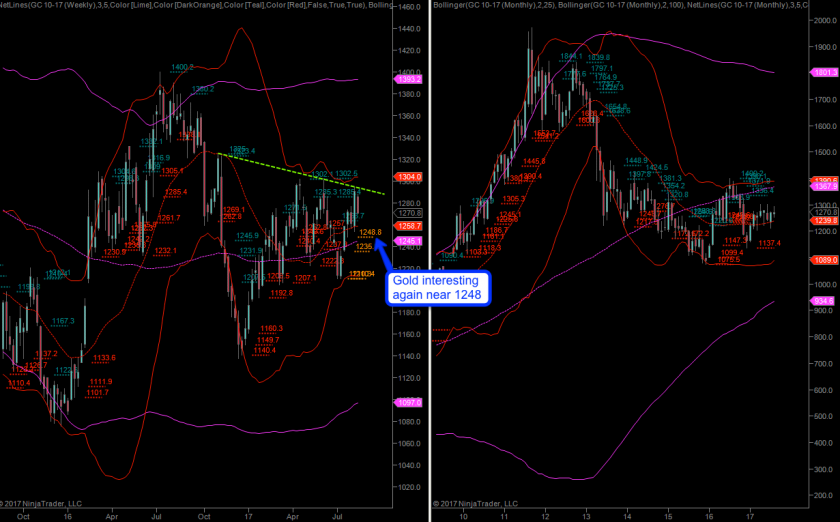 Gold is also pointing lower again but I wanted to share a more long term perspective. Look at weekly and monthly panels above – the latest reversals has confirmed a diagonal resistance zone which currently extends into 1290 plus minus a few handles. For now gold and precious metals in general are off the table, at least until gold pushes into 1248 near its 100-week SMA.