The squeeze continues on all fronts and we are either at the cusp of some major move in both forex and equities or we are at the end of a beautiful run. And if it’s the former it has to happen today before the close. No, we can’t have it both ways, so let me elaborate. 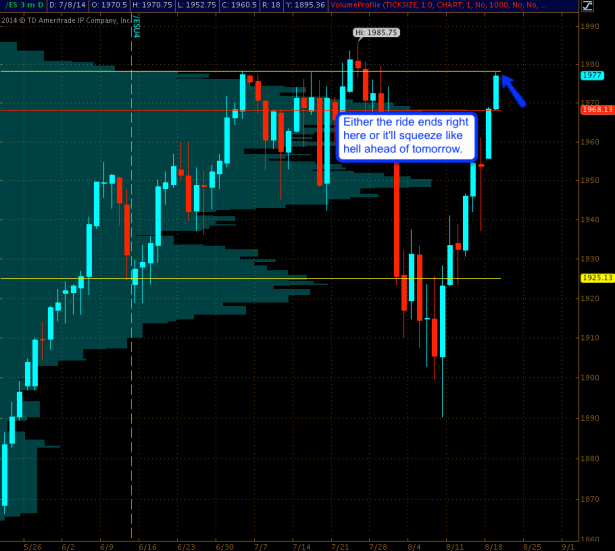 The E-Mini has made a phenomenal recovery since those 1890 lows – we’re talking nearly 90 handles in eight sessions. If you were caught short near the bottom you just got your ass handed to you. I trust none of your rats were that stupid – if you were then you didn’t pay attention.

The situation we’re facing now is an interesting one. This has massive short squeeze written all over it as we’re but handles away from the old ‘not so fast’ zone delineated by ES 1980. And if it was any other week I’d say we’ll probably paint an obligatory red candle and then take the bears to the woodshed. 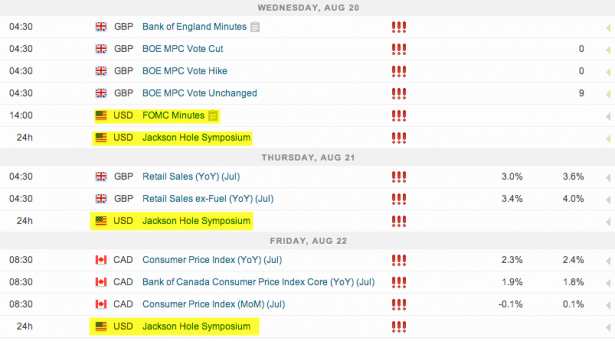 However, this isn’t an ordinary week – starting tomorrow we are graced once again by this month’s FOMC minutes – the good ole’ Yeller is so reliable. But expect price volatility to (as measured by for instance ATR) come to a screeching halt as the global cabal of banksters hold their annual conference at Jackson Hole.

I actually was invited but decided to abstain for – ahem – personal reasons. Anyway, as usual the tape will most likely start freezing up starting tomorrow, which also means I won’t be doing much on the trading side. So let’s review some of our recent gems – there’s a good chance that at least one of them is going to hit their stop once things start swinging widely. 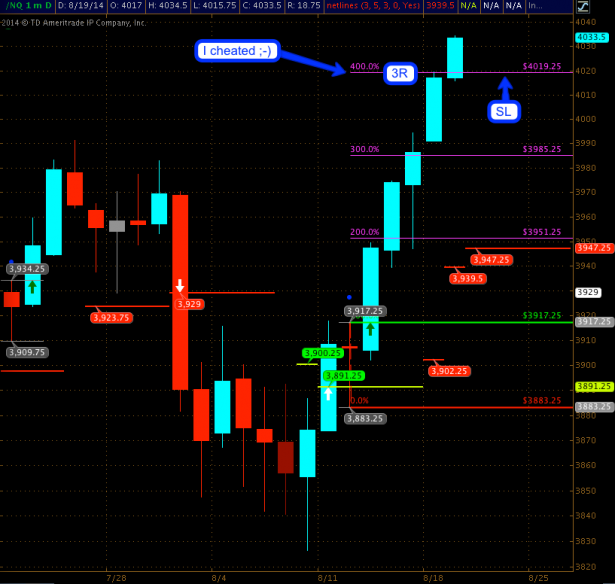 You all recall (and some hopefully enjoy) the NQ trade we’ve been holding since 3917. Fortunately I am not employing CrazyIvan campaign management as I suspected that this one may turn into a squeeze and cheated by switching to Heisenberg style campaign. Otherwise I would have technically been forced to close out yesterday as it touched 3R (almost exactly). And there is still a chance that it’ll run much higher – the ES is at 1981 as I’m typing this and we still have 90 minutes to go go go go!! 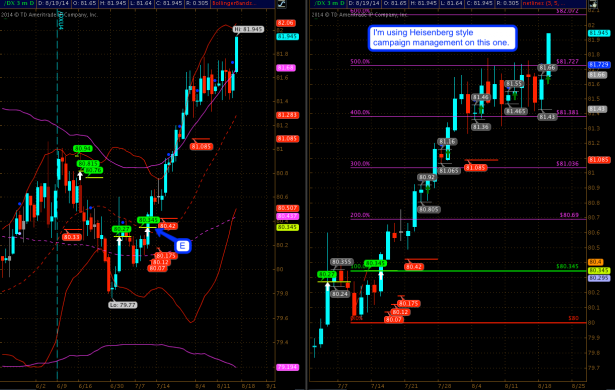 Now on the currency side you may have long forgotten about that LT campaign on the Dollar. That sucker has banked me almost 5R by now – it’s been one of the best setups of the year. As some of you may recall – that has been a Heisenberg style campaign from the get-go. There was a very low probability it would get above 80 and when it did a lot of Dollar shorts starting running for the exits. I’m holding this one and my stop has been advanced now to 25% trailing. 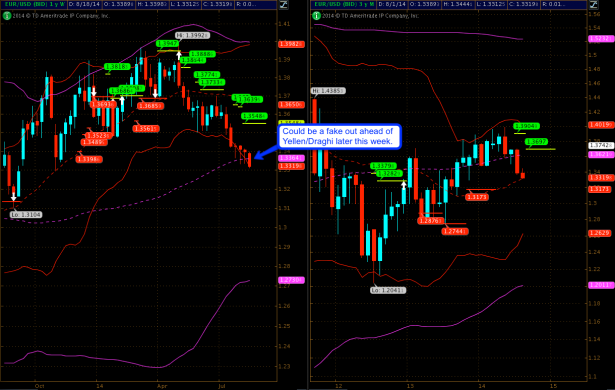 Now the EUR/USD is looking extremely sweet to this lowly expat – in a way I am perpetually short the EUR as I earn in Dollars and live in Europe. Which is why I hedged myself near LT support (see yesterday’s post) and was happy to be stopped out today. However, it may not last – for the same reasons outlined above. Either this thing drops now – today – or most likely the rumor mill will take over and punish the early shorts. Right now I don’t have a dog in this fight but I hope that it’ll drop a few more pips before things start slowing down.

For the reminder of the week I may mix things up a little to keep you guys entertained. I always considering to post a little series on cognitive biases – what do you think? It’s something most of you have probably come across but it bodes repeating as we humans are unfortunately so easily corruptible. Or perhaps fortunately? 😉