That NFP report threw me a bit of a curveball this morning. I always always check the event schedule before my post but I today I was too bogged down with domestic chores and a bit overwhelmed with posting a plethora of picture perfect setups. Got sweating a bit when everything threw a tantrum just minutes later (great timing Mole) but then was elated to see most charts march on happily in their original direction (excluding the damn bonds). 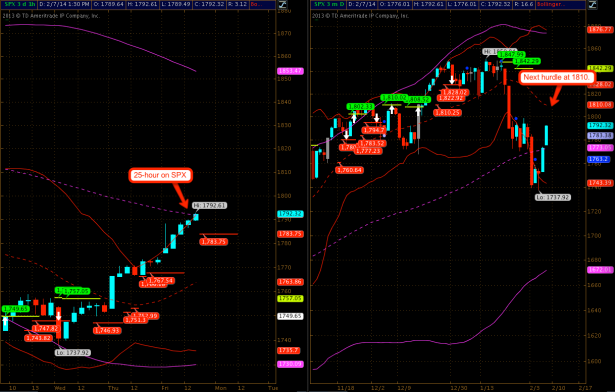 It was almost humorous to watch the bears during the first spike lower (yes, I go slumming in the mornings) – everyone suddenly ‘knew’ that the tape would continue downward and that the bear was back. It was even funnier seeing the same folks revise their opinions just minutes later. So much for that – perhaps good ole’ technical analysis isn’t dead after all? 😉

Let’s see where we are on the SPX – the cash is now solidly embedded above its 100-day SMA. Short term there’s a bit of hourly resistance which needs to be overcome – it would be nice to see that give way today before the close. 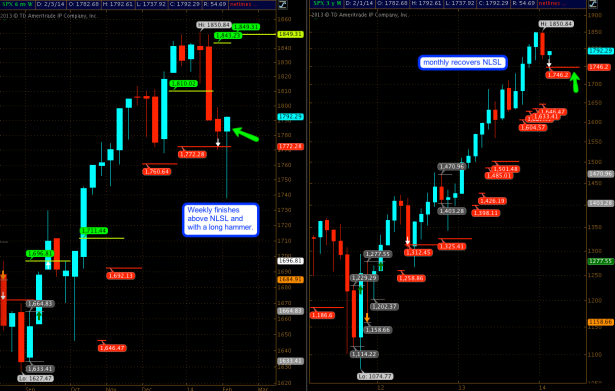 On the weekly we see quite a candle there – nice long hammer and it recovered the NLSL we gave up earlier this week. The monthly also is donning a hammer right now – admittedly we’ve got a ‘few more days’ to go, right? But thus far we have rejected the monthly NLSL and the bears have a few more weeks to try again.

Not to say that the bulls are out of the woods just yet – there is that 25-day SMA near 1810 and that is where the bears will get their second chance to drag this market down. However there are new developments on our P&F chart which suggest a new inflection point for us: