When I was a kid one of my favorite SciFi novels was ‘The Stainless Steel Rat‘ written by Harry Harrison. The protagonist is a futuristic con man, thief and all-round rascal. He is charming and quick-witted, a master of disguise and martial arts, an accomplished bank robber, an expert on breaking and entering, and (perhaps most usefully) a skilled liar. A master of self-rationalization, the Rat frequently justifies his crimes by arguing that he is providing society with entertainment; and besides which, he only steals from institutions which have insurance coverage. He displays a strong morality, albeit in a much more restricted sense than is traditional. (For example, he will happily steal, but deplores killing.)

From the original publisher’s blurb:

…We must be as stealthy as rats in the wainscoting of their society. It was easier in the old days, of course, and society had more rats when the rules were looser, just as old wooden buildings have more rats than concrete buildings. But there are rats in the building now as well. Now that society is all ferrocrete and stainless steel there are fewer gaps in the joints. It takes a very smart rat indeed to find these openings. Only a stainless steel rat can be at home in this environment…

The main character, Slippery Jim DiGriz, is one of those likable bandit type characters whom you want to root for even though they are technically breaking the law. Not surprisingly I was able to identify with that sort of a character – my evil genius was just waiting for the right kind of inspiration. What was particularly intriguing about Slippery Jim was his ability to beat the establishment at its own game. Evil Speculator in some ways is the embodiment of that very notion – an opportunity for the little guy to extract a few pennies from the privileged few who know how to play the system.

Anyone who comes here is invited to become part of our cause, no matter what color, creed, or culture. We play by the rules, even if they change them on us midstream we simply learn and adapt. We work hard to develop a system that offers us an edge, and it is our system – we play by no other person’s rules. The market is a cruel mistress and as such we pay for and acknowledge our mistakes and weaknesses, doing so makes us better traders. We strive to be disciplined and resist emotions like fear or greed, and we reject cognitive biases tempting us to bend or even break our own rules. We recognize that despite the fact we all compete against each other there is strength in numbers – therefore we choose to collaborate and share our insights. After all, what we are up against are extremely well organized institutional traders with access to considerable resources as well as intimate knowledge of how to play ‘the game.’ Finally, we don’t hesitate and take action as as soon as the opportunity represents itself – nothing you do or know matters if you can’t pull the trigger when the time is right.

Well, guess what – the time is right, and the opportunity you have waited for is here and it is now. The stakes are high and this time, the gloves are off. The bulls had their fun and they got every single break in the book and then some. Now our time has come – we are all stainless steel rats and will milk this market all the way to the very bottom of the abyss.

Okay, let me climb off my soap box now – hope you’re still with me. I usually prefer to stick to the facts and don’t revel in lengthy philosophical lectures. But this nation is heading into extremely difficult times and many innocent and hard working people all around you, maybe even your friends or your family, are going to suffer as we witness the complete unraveling of our financial system. While the pirates are busy looting our country and planning their escape to their tropical islands, the rest of us will be handed the bill for their decades long exploits. I have to respect their devious endeavor but I vehemently refuse to be the one paying for it.

Therefore I call upon my legions of stainless steel rats to join me in my nefarious cause to beat the incumbents at their own game. Do it for yourself and for the well-being of your family. Now, that I’ve painted the picture, let’s get on with business: 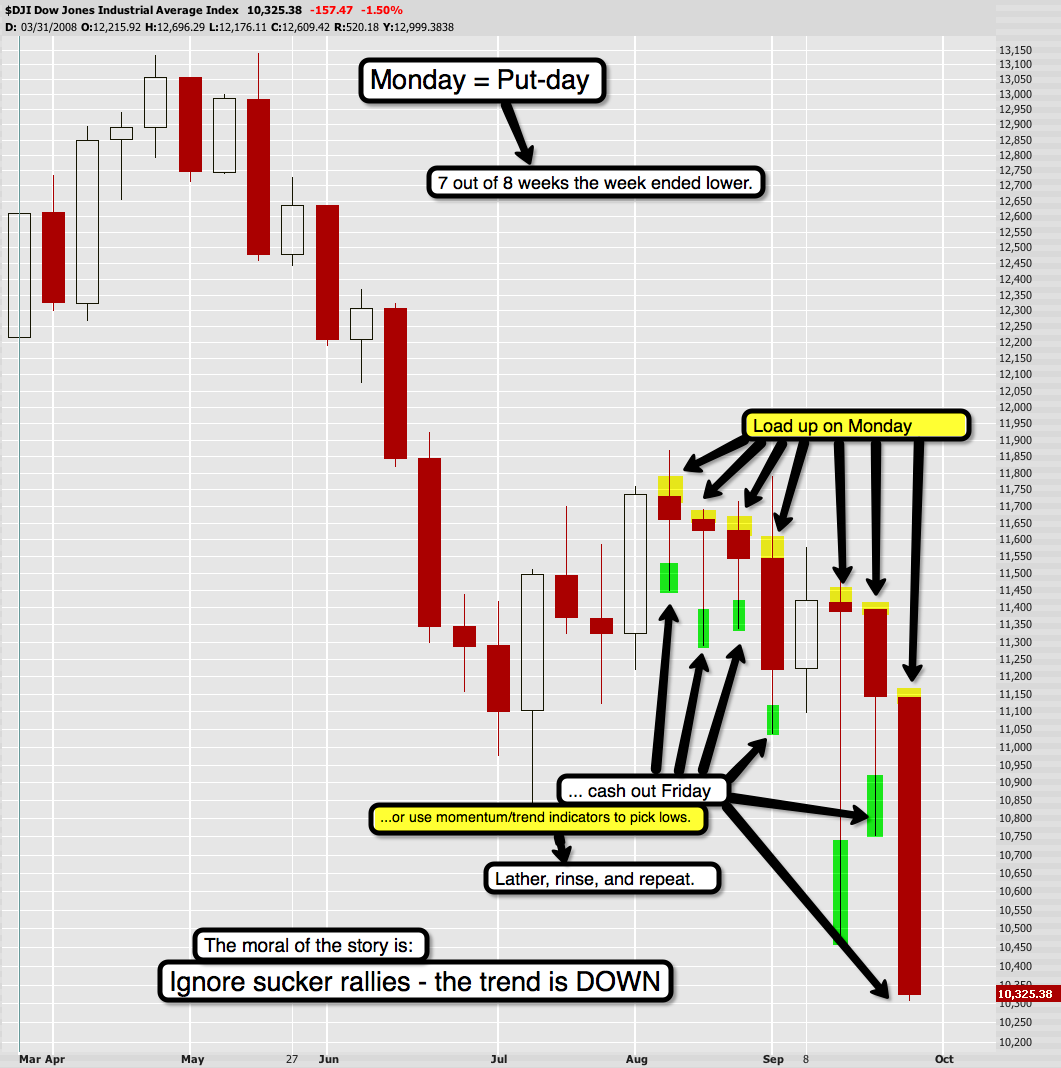 If nothing else I want you to burn a picture of this chart into your cerebral cortex (look it up). Quite frankly, this is all you need to know. The market is in a clear down trend, and it’ll get a lot worse before it’ll get any better. Yes, we will see intra-weekly gyrations that will challenge our resolve, but the numbers speak for themselves. If you would have gotten into index puts on Monday and blindly sold on Friday, you would have banked a profit 7 out of 8 times. Now, of course we can do a lot better than that, and the chart indicates that there is additional profit potential by timing your exits through the use of momentum indicators like for instance a simple stochastic. As of late I also watch daily pivots in combination with the TNX and the Yen. Again, for the folks who missed my previous excerpts on the subject, the TNX moves with the market, while the Yen is an inverse indicator. You can actually set up a left chart between the @YMZ8 and the $TNX, switch it into hummingbird mode and then watch this happen in real time. 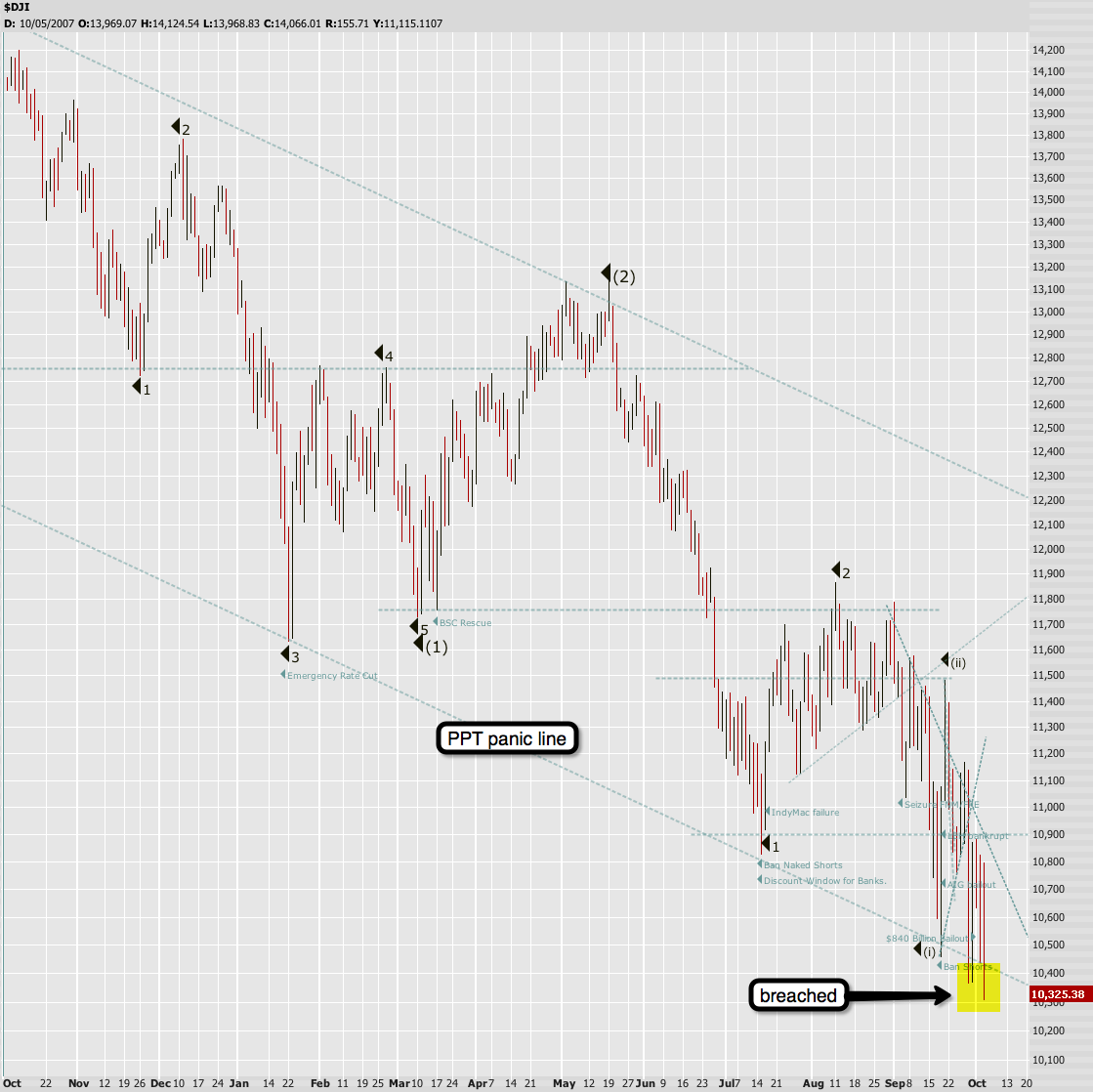 Here’s a more elaborate view of the DJI cash index, which shows the wave count and how it has been bouncing off of what I termed the PPT panic line, or PPTPL. After the bailout boondoggle was finally rammed through Congress Friday afternoon (as I predicted) the market surprised even the most cynical among us by refusing to rally and instead made a u-turn pushing through the PPTPL and closing at new lows. For the record, I wish Congress would have exhibted the same sense of urgency when asked to increase the minimum wage for low income workers – that took them about 10 years. They should be so proud!

I expect there to be a retest of that line but barring any major stunts by the PPT I expect it to be brief and tepid. Over the weekend I’ve been perusing the news worldwide and it seems that Europe is pouring an unprecedented amount of funds into salvaging a number of their own banks and financial institutions. Here are some of the headlines:

Obviously, all that action will introduce renewed volatility into the market as investors slide the slope of hope. But rest assured that none of these panic moves will do much in stemming the continuous descent of equity markets domestically and abroad. We might see some brief and violent rallies, which I encourage to use to load up on your favorite puts or short positions. 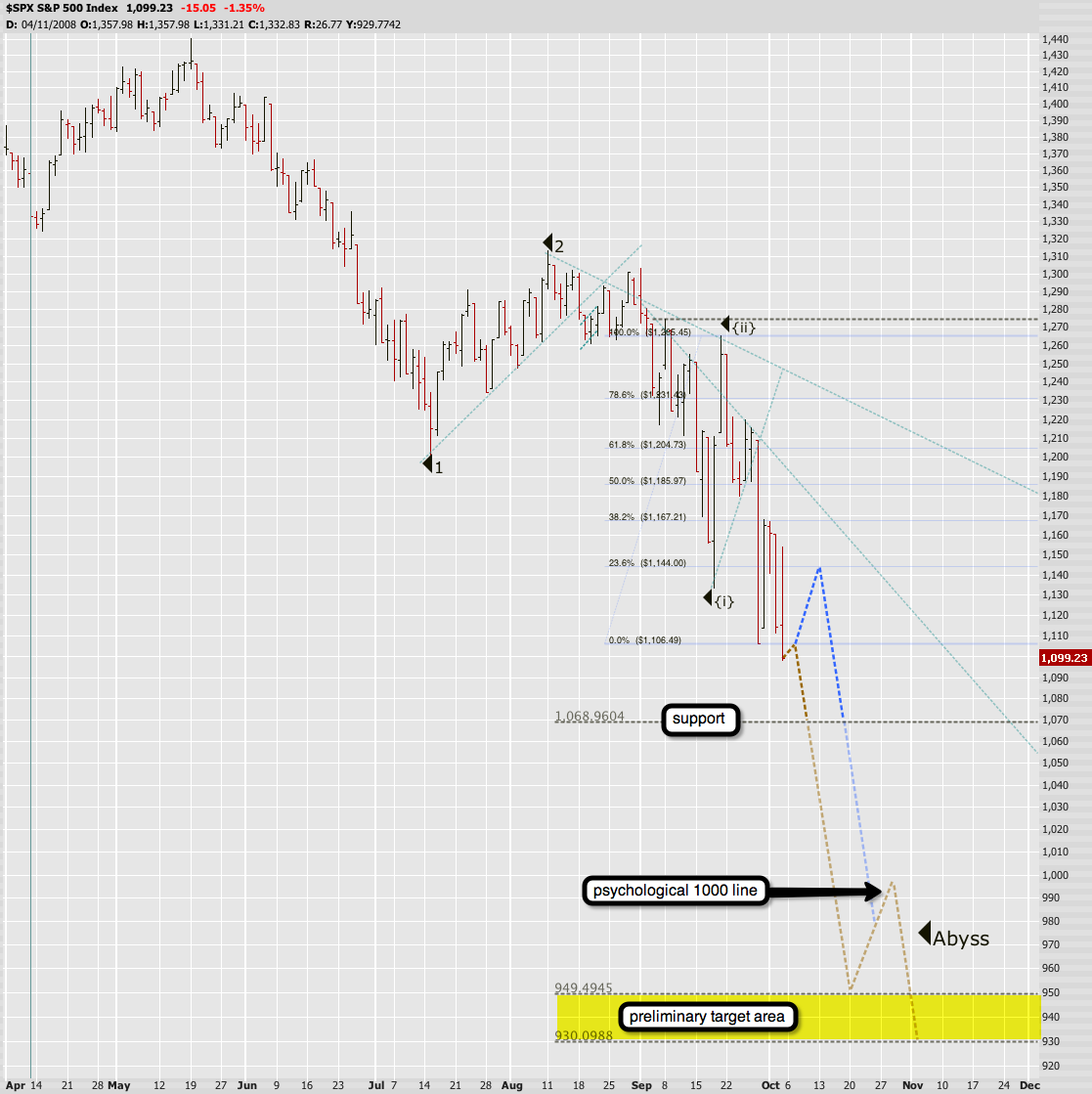 My preliminary target is the 950 area on the SPX, and I expect the DJI to slide to between 9600-8800 before we will see a counter wave that lasts more than a day or so. As marked on the chart, there is the potential that we rally – I’d give it about 35% – if we see some major concerted action by the world’s central bank. However, I don’t think that even a move at that scale would be good for much more than 30-60 points on the SPX (and maybe 200-400 points on the DJI – at minimum that diagonal resistance line on both indexes should hold). There’s the obvious psychological 10,000 line and once we breach that I do expect a retest before we continue with our descent. 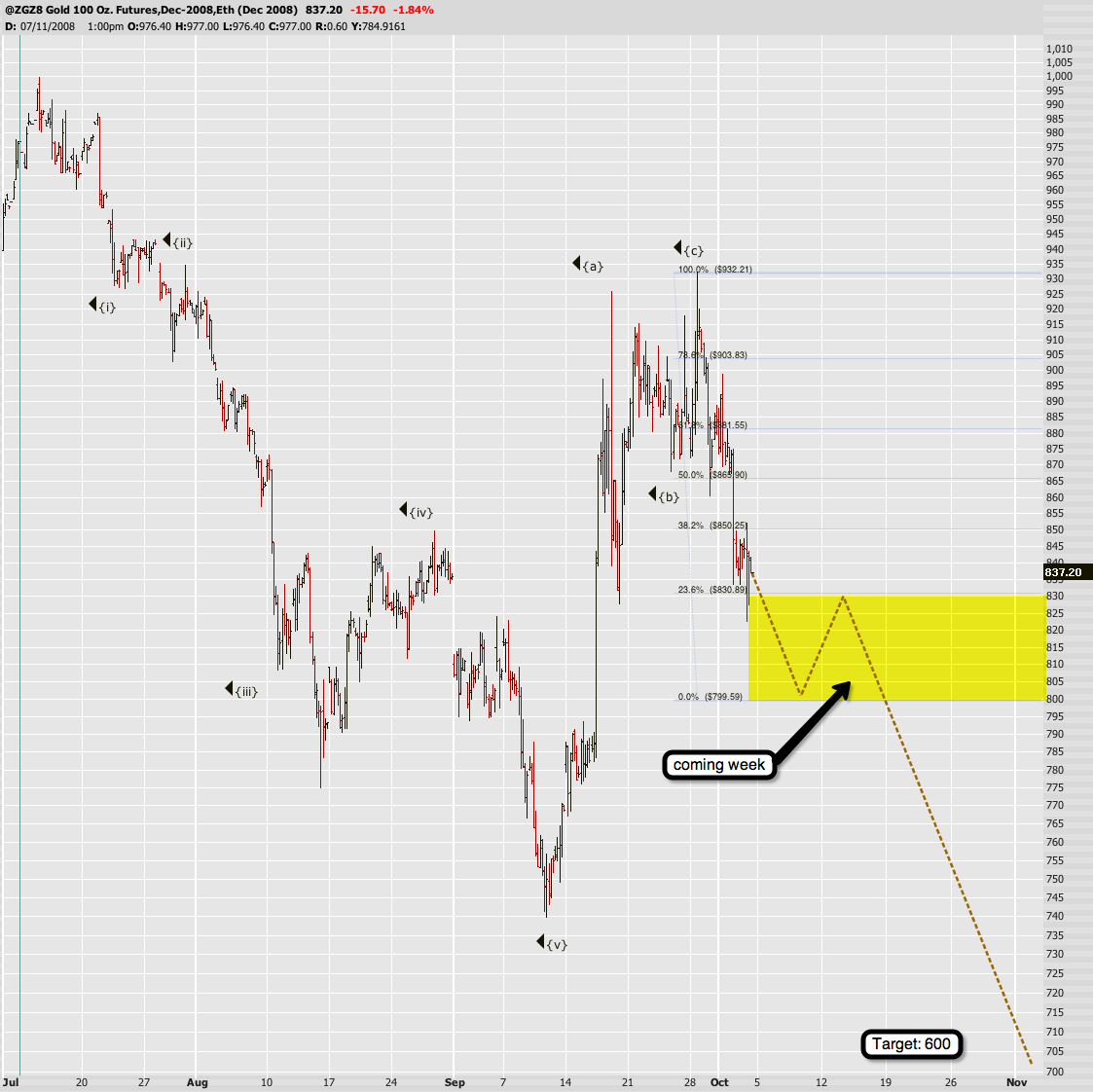 Gold back on track.

It seems Gold finally picked a direction and it’s down. The wave count is still a bit premature, but it seems that it’s completed an {a},{b},{c} and we’re in the first wave down that should take us to nearly 600 in the coming weeks. I’m waiting on a little bounce up above 800 to load up on puts in GLD and possibly some Gold related stocks like ABX.

BTW, in case some of you wonder. My long term plan is to wait for Gold futures to find a bottom and then load up on physical Gold. The timing may just wind up to be perfect as we should reach the end of intermediate (3) around the same time Gold should find its level. Incidentally, I have come across various news reports that the rich and wealthy are loading up on an unprecedented amount of physical Gold (not related paper) – obviously those cats know what time it is. Unfortunately for them however they are unable to read a chart, which may serve us well as many of them might engage in panic selling once we’re pushing towards 600. But again, that is several months out, so let’s not worry about any of that for now. In the meantime we’ll short the heck out of the precious metals. A word of caution regarding Silver – don’t trust any reports pointing towards shortages in Silver, and anticipating a sudden surge in value. The gold/silver ratio is increasing, which is natural during economic deflation (also look at copper, which is a great indicator) as investors are seeking out protection from risk. 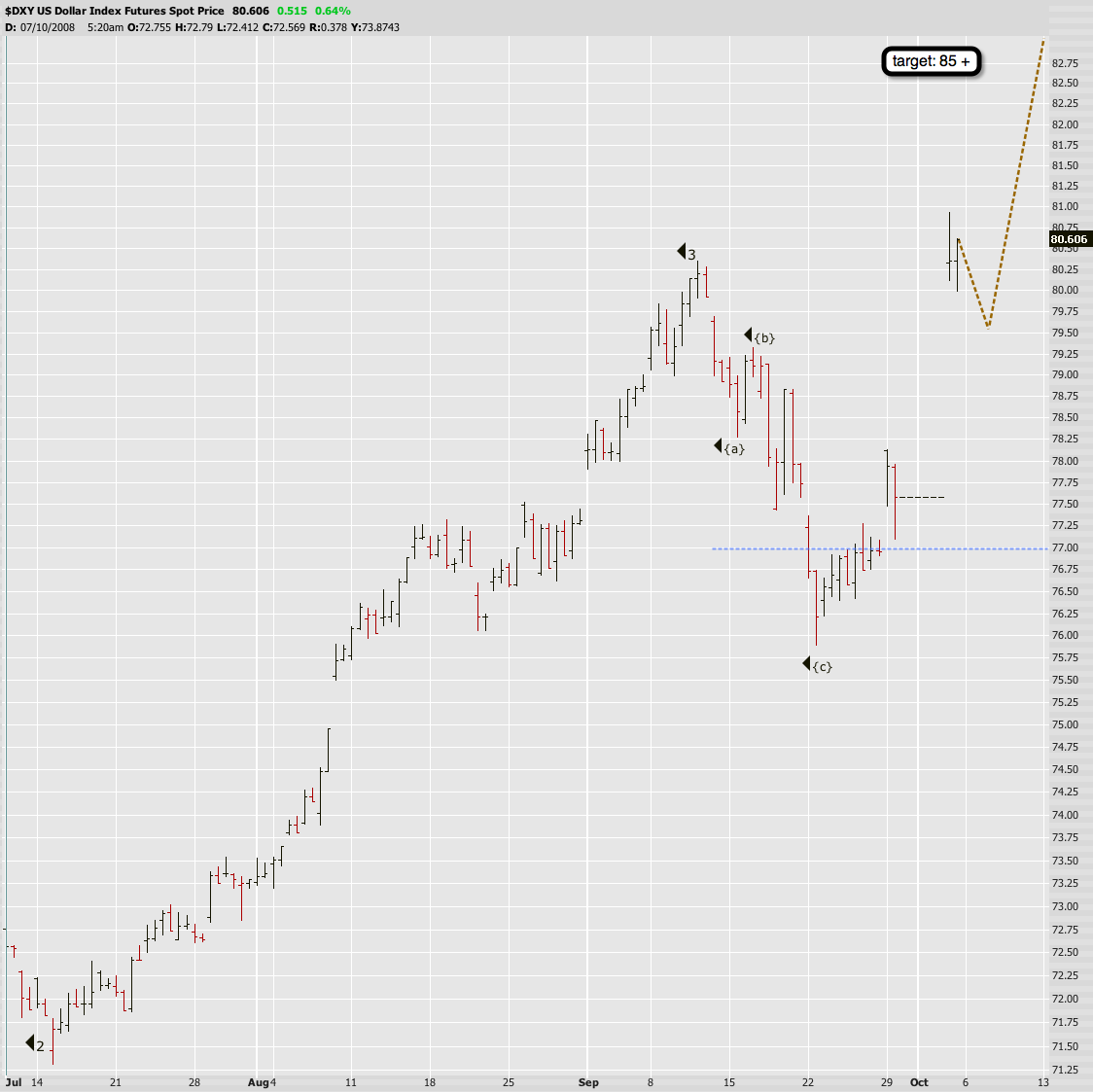 The U.S. Dollar is continuing its path upward, as expected. We should see a small corrective wave soon, but nothing major. The European and Asian central banks in collaboration with the U.S. Fed continue their currency manipulations to push the Dollar higher. I guess they want their U.S. treasuries to be worth something once they begin dumping them en masse.

In conclusion I want to introduce our new theme song for wave 3 of (3). It’s the perfect soundtrack for watching the market drop into oblivion and your portfolio burst at the seams. BTW, it’s meant to be cranked up – and remember to keep young children and pets out of hearing range 😉

This should be a fun week – Berk and I will be posting symbols and charts of our favorite victims.