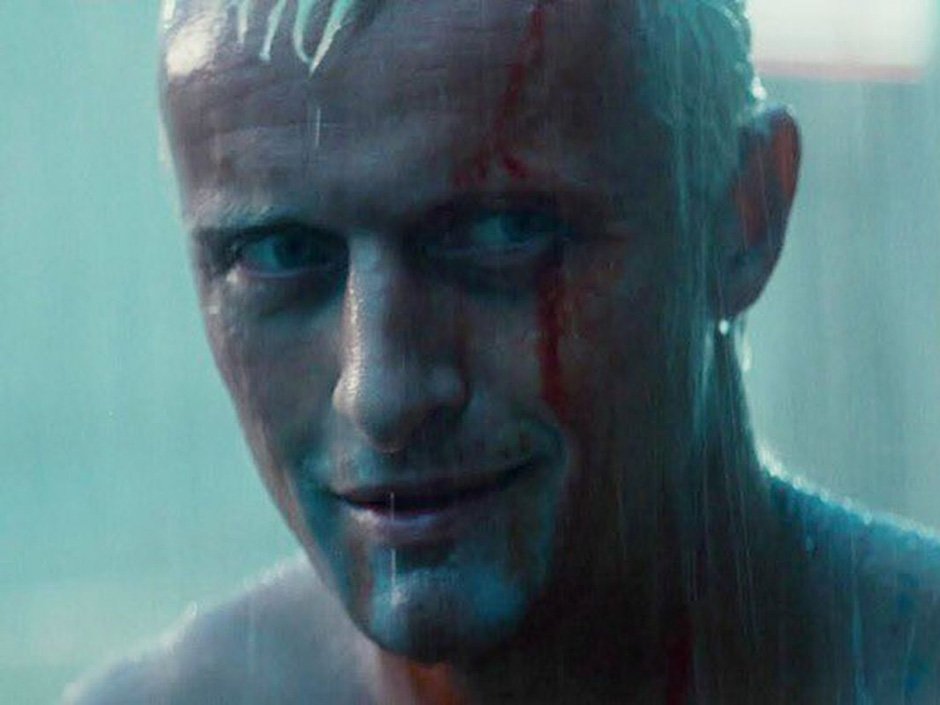 I don’t know about you but the older I get the faster time seems to pass by. I remember back as a little brat in Austria when I opened that first door on my Christmas calendar in eager anticipation of getting my grubby little hands on a mountain of new toys and other useless gimmicks a little over three weeks later. The time in between felt like an eternity to me and I impatiently counted every single day.

Now a few decades later I just remember wishing you a happy new year not so long ago. And somehow here we are already – in the final week of January. Before I know it it’s going to be spring again and the craziness of Las Fallas will be forcing us to skip town for a quiet hide-away in the Spanish countryside.

Another avid reminder of time passing are the roll over of  futures contracts. I was updating my list of futures contracts last night and something occurred to me. I may be dating myself here but some of you may remember watching SciFi movies with plots taking place in the ‘distant future’ around 2000 or perhaps 2020?

Around 1982 as a young teen I was completely blown away by the movie Bladerunner which depicts a dystopian future taking place … last year! That’s right the original Bladerunner storyline released in 1982 takes place in November 2019.

Well, that’s two months ago now. Although I wouldn’t say that Los Angeles has avoided its dystopian fate completely, it’s a far cry from the dark industrial sprawl Ridley Scott was imagining.

He was right about the multi-lingual part, but instead of flying cars we got flying drones delivering Amazon packages. I guess we got lucky on that end. I for one wouldn’t want to look up in the sky and see it filled with flying vehicles buzzing around. 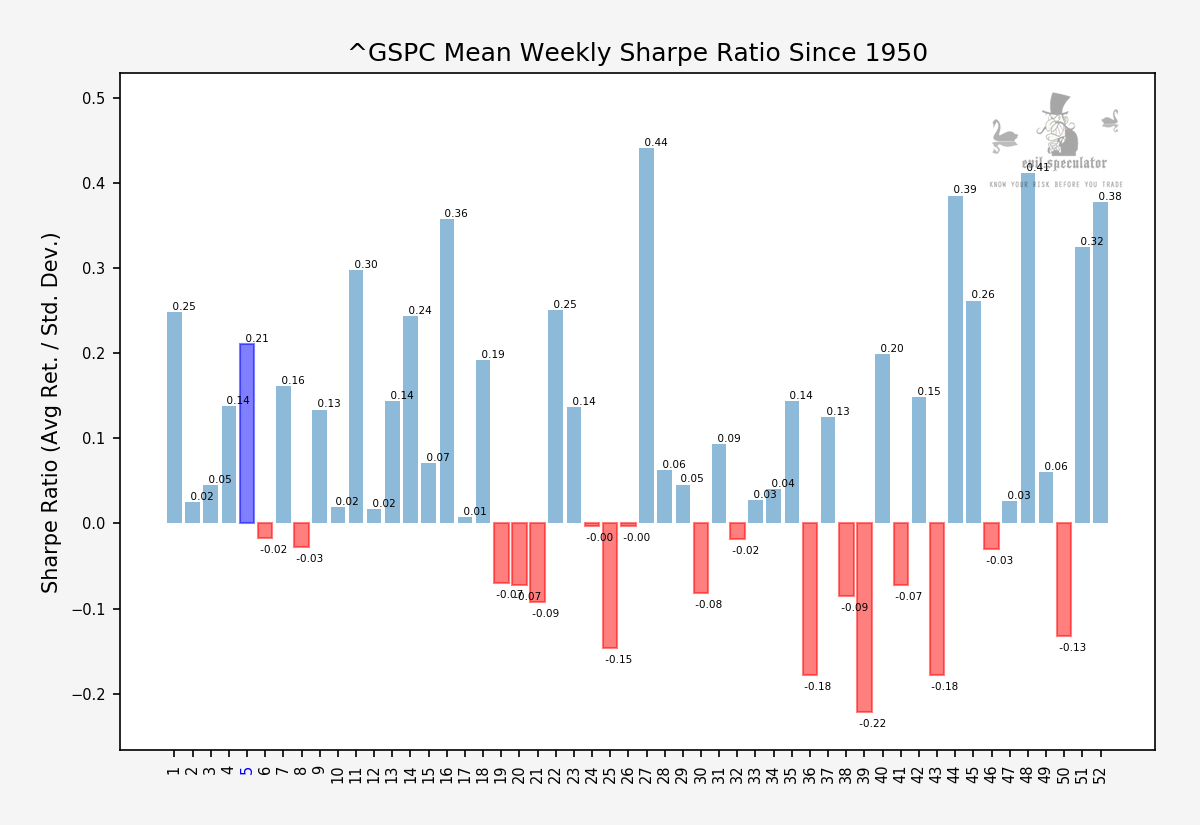 Let’s start with the Sharpe ratio which ranks as the 2nd strongest in January at 0.21. That’s a good start! 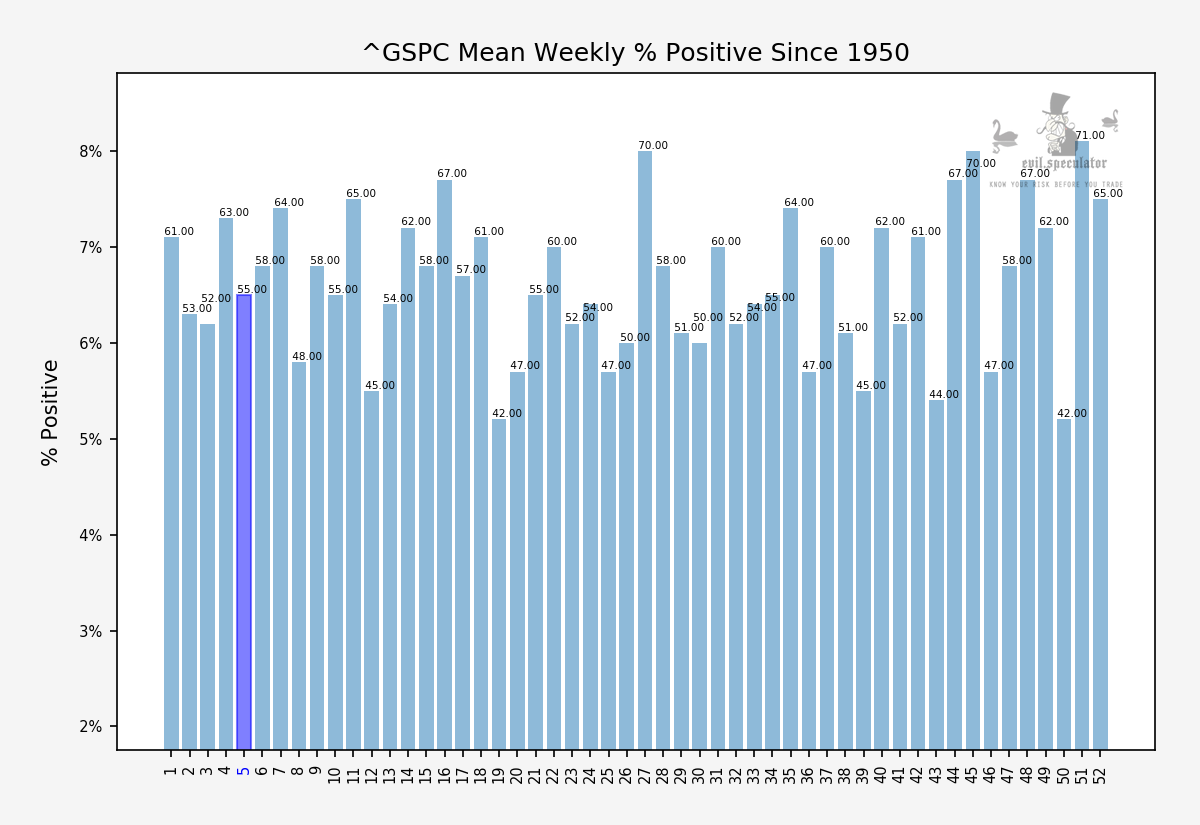 Mean weekly % positive however only sits at 55% which is barely above a coin-flip. Which brings us to volatility: 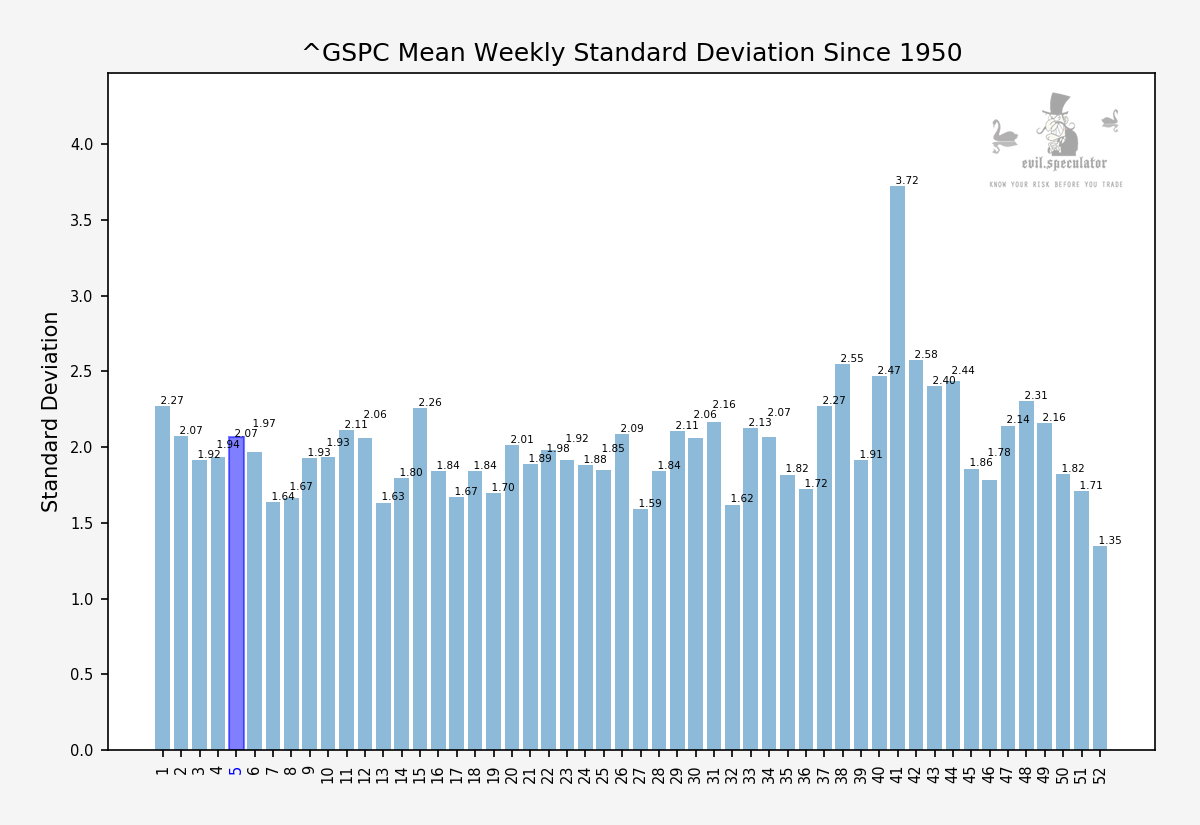 Well, if there are swings they aren’t huge – standard deviation is a bit elevated but pretty close to the median. 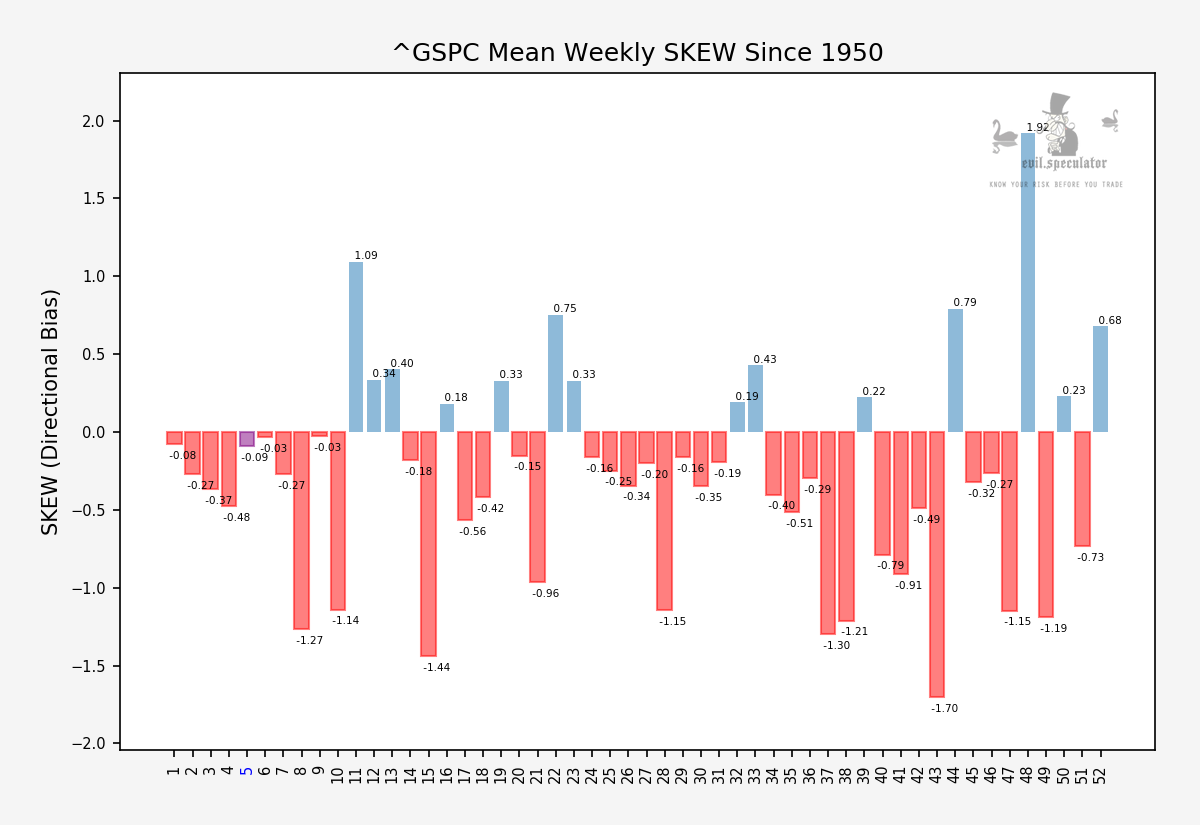 SKEW is almost flatlining at -0.09. Let’s just call it a normal distribution, folks. 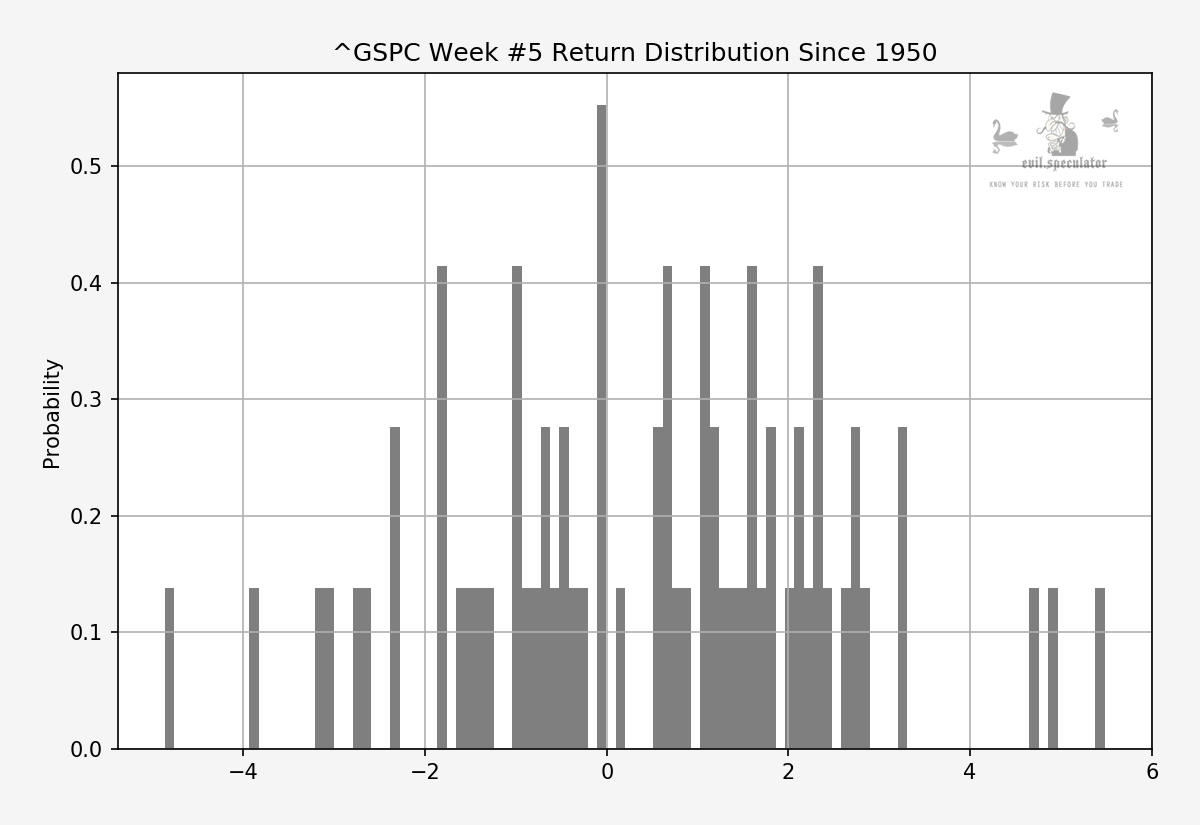 Yup, that’s as normal as she gets. No crazy SKEW here with a nice big spike right at zero. 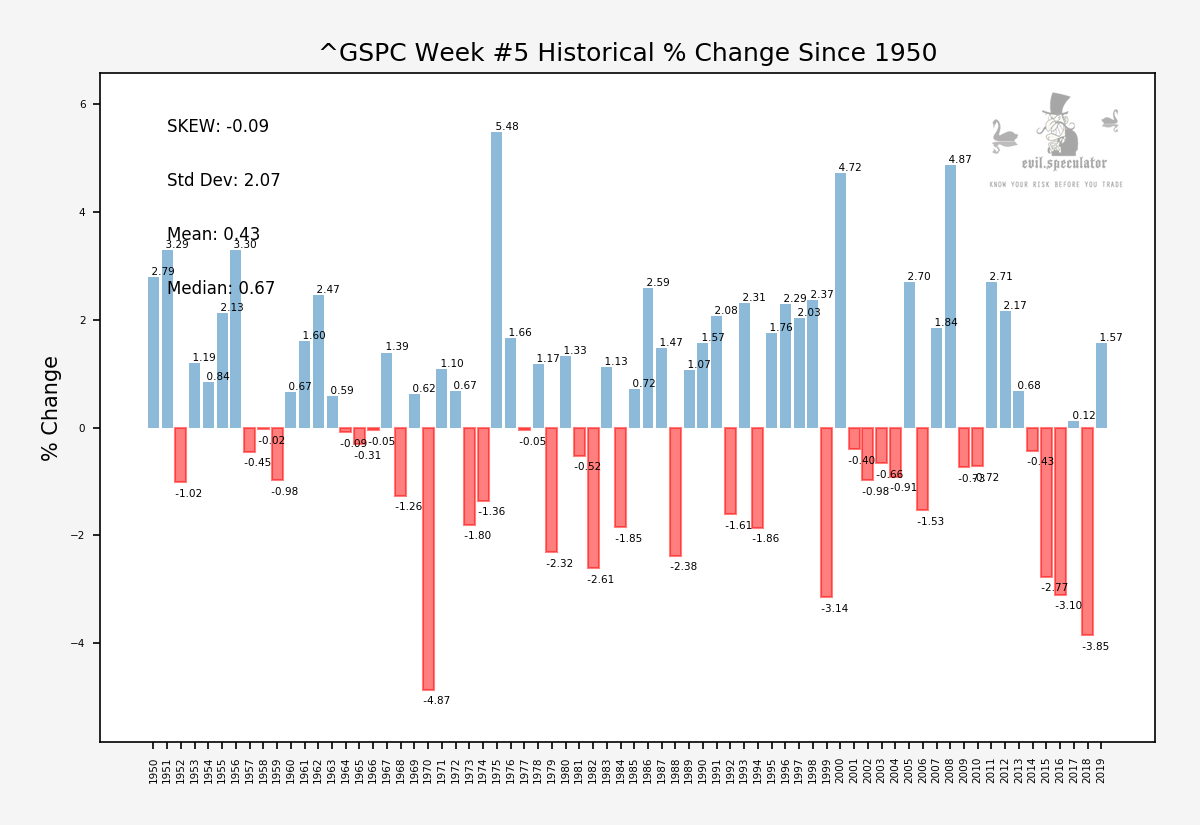 The historical % change chart sheds a bit more light on what’s going on and it’s slightly concerning. Although the distribution between winners and losers seem pretty equal we are seeing a slight shift toward the negative over the past decade or so.

Given the above I suggest to keep a low profile and not to make any big directional bets, especially given that we are running far outside of any technical context in equities.

Now for my intrepid subs here your list of weekly stock picks: