Still Crazy After All These Years.

However bad all bears feel about the pressure on their P&L, imagine the desperate straits of someone who needs to circulate a rumour on Thursday before Opex that the FED is going to raise the discount rate. Imagine my incredulity to see the EUR sell off 85 pips. For the discount rate?!!! The rates used by dying skanky pseudo-banks with nicotine-yellowed fingers pullin tattered sheets of MBS, CDO, and CMOs out of stained and patched raincoats?!!

Imagine my surprise getting ready to ride the elevator back up only to find it stalled at 30 pips……………………. I had to work hard to pull back to near even last night. Something nasty is coming, IMO.  I just don’t know what it is, nor where it’s coming from; but it’s big, and it’s ugly, and it is going to put a hurt on a lot of people. Still hazy about all these fears.

I sat back and thought about what it would mean if the FED kicked those holding calls in the pills, just like the last time (and Aug 17, 2007). IF you want to understand what evil lurks in the Heart of FEDs, look to who is holding a major losing position in index options. If it’s vampire squid and cronies, then it can be no surprise when that kick comes before the market opens on OPEX.

Otherwise, there is somone somwhere who is desperately sweating and likely trying to wish the SPX below 1165 at tomorrow’s open, IMO. I think that their collective backs are against the wall and they’re staring into the cold wet eye of a vampire squid. I’m very happy that it’s not me. Still solvent after all these tears.

Welcome to the broken clock. Still lazy about all these gears.

After knocking on the “since Oct 17” trendline on Wednesday, we get nothing but a sort of spinning top yesterday. And I need to know, is this for real? I see the meat. I smell the cash. But is that a string leading to a pulley holding up a Wile Coyote safe? I’m sticking to intra-day trading. Besides, TD Pressure has yet to signal a low risk SELL (see the pink box). Still  leery of those buccaneers.

Thursday’s bar (a 44) had only a 1.54% chance of occuring – but it did. The probabilities of an open and close being in the same bar segment were 14%. Surprises abound, and the odds are best over a long period of time, I guess. My opinion is that there will be more specialists and market makers happy if SPX opens and closes below 1165 than the alternative. Still sleazy for all these profiteers.

Today is OPEX.  Yesterday was a mildy down day from the previous close. The SPX is in an up trend. When all of those are put together (down Thursday and positive slope), there are only 89 / 334 OPEX that meet the screen. 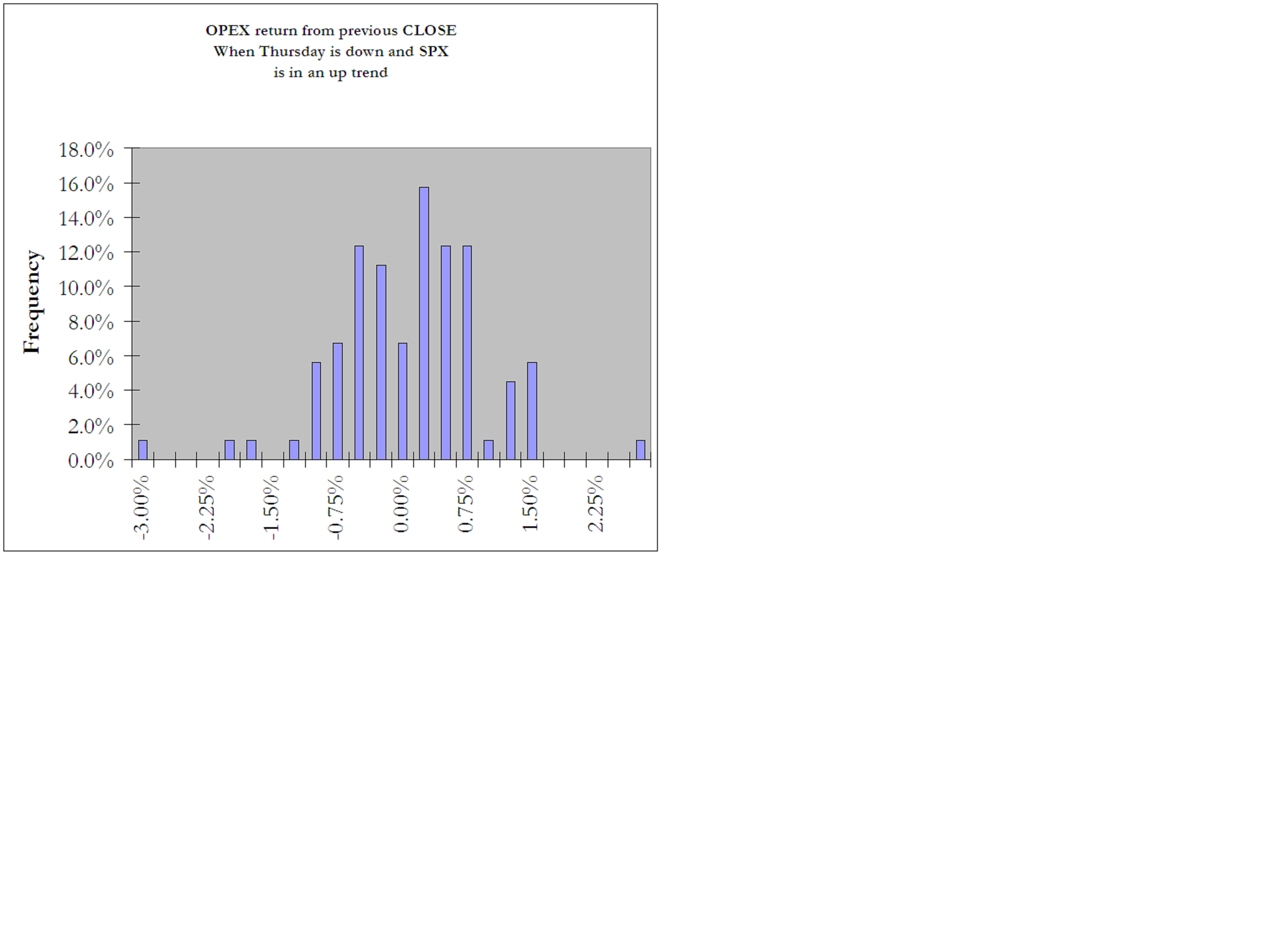 You can draw your own conclusions. OPEX is a nasty day and no information should lead one to dabble  in equities unless you are stuck with your hand in the monkey jar.

ES OVernight saw Asia green in a bright way, except for Malaysia. Europe is red in smaller areas such as Holland, Greece, Austria and Spain (HAGS or NAGS. heh.).  The breadth is weak in all green markets there. The DAX gapped up a the open (How unusual!), but faded like a pair of summer jeans hugging a nice body and followed the EUR down. Breadth is quite good in the green sectors, and even the 3 red (Ind., Healthcare, and Info tech) sectors are 50% up.

ES was quite flat all night, and the paint is still drying. A two point range leads to toothpicks in the eyelids. PIvots:

I’m going to avoid SPX, unless the most juicy of steaks is offered. I’m going to dance and flirt with EUR instead (she wears scarlet well, and that’s red’s sexy cousin). Still racy after all those beers.

The daily EUR chart still shows that classic bottoming process. Yesterday strikes me as the cleft before forming the right cheek. After all, they are a pair. Deux fesses qui se connaissent. The bounce back from the 50% FIB that the TA suggested occured – but with much more violence and virulence that I had expected. I don’t see any reason to put aside the range trades between 1.3550 and 1.3850ish. The chart shows much support from FIB and TD risk (the support indicated by the purple dashed lines) just below. Plus TD pressures has experienced some release -so there may still be a test of rumoured stops below 1.3520 but I think the cork will bob back up to the surface (just in case, I’m packing my stop-loss). Still amazing after all those jeers.

I got up to finish this piece just in time to see the other bookend  of the 590 bounce finalize after the Europe open. Didn’t have any traps set, but I might indulge in a little tail coat riding of the rumoured sovereigns playing safety net. I’m ever mindful of the supposed sell stops down below 620 where the salivating heddge funds were said to lurk and wonder “is this all there is?”. Pretty tame if it is. Maybe time to ride the elevator back up a bit like last night.

Greece still on tenterhooks. Some commodities catching a bid after the US jobs report. Roach wants to knee cap Krugman. China must have shown him pictures of his grandchildren going to school with dangerous intersections. UK unemployment fell so much due to those giving up.

ON MONDAY: Chicago FED at 8:30. Followed by Home Sales, and all the attendant hangers-on at 10AM EDT.

Nothing today to make OPEX really like a knuckle ball.

Have I mentioned that it’s OPEX? 🙂 Still crazy after all these years. Time to listen to a little “The Pierces” for a change of pace. The secret is that there is something about a bobbed blonde in gold lam-ay flapper skirt.