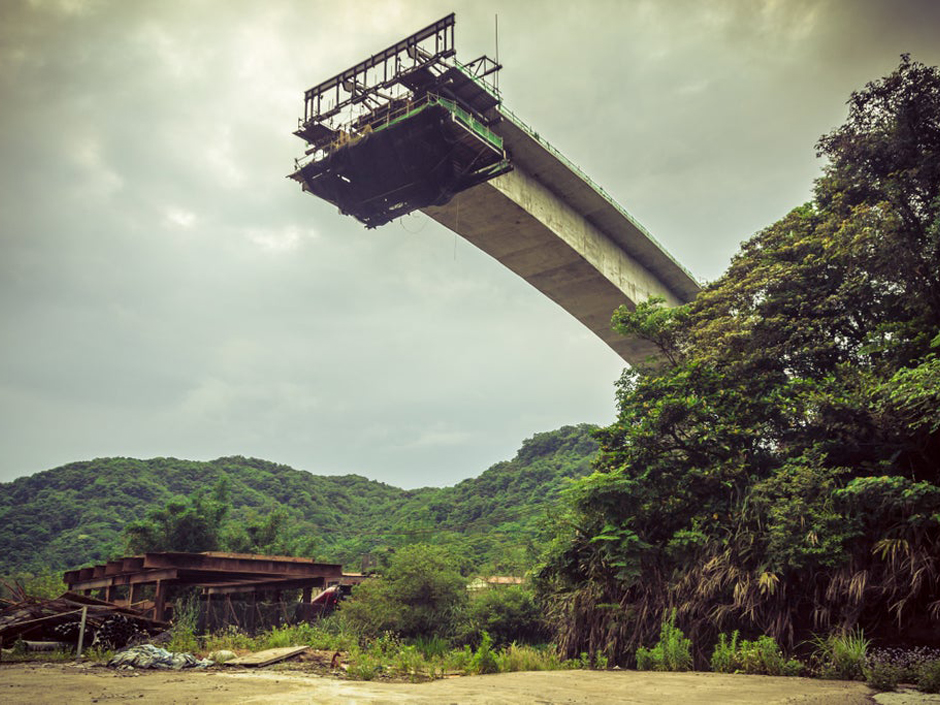 I have always found human behavior very interesting, and in particular the collective behavior exhibited by large (anonymous) groups. After all there’s a ‘random cognitive bias’ widget pinned right here in the sidebar of my blog. And lest you accuse me of being snobbish: I do not consider myself immune to the human condition and therefore analyze myself on a constant basis, almost to a fault (ask my wife). Especially when I happen to get it totally and utterly wrong: 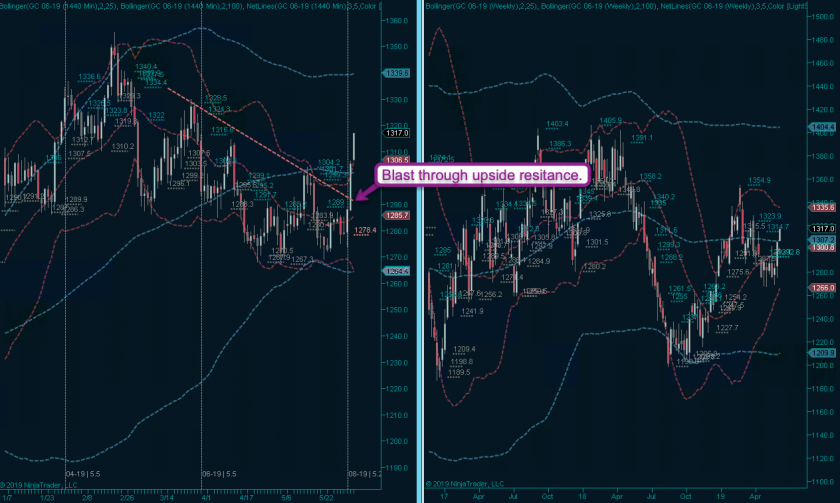 A perfect example of that is gold which I pretty much wrote off just a day or two before it turned on a dime and embarked on a massive short squeeze. Of course this one was a pretty tough one to catch and in retrospect I would make that same call again, as gold had been in a boring churn for weeks on end.

But where I did get it wrong was in NOT grabbing a long position after that blast through upside resistance. Most of us actually feel that way – we don’t like to ‘chase a big move’ despite a mountain of evidence that in over 65% of the time a blast off candle like this is followed by more upside, especially in commodity futures as well as in the forex market.

And let’s remember that similar break out moves have happened in several symbols over the past few weeks: bonds, soybeans, wheat, corn, and now gold. To my credit I did anticipate those and was able to jump on the bandwagon ahead of time.

But I must ask myself: Why do I have this psychological inhibition against jumping on break out candles? It’s something that should be addressed by running the stats followed by defining clear entry criteria. To be continued… 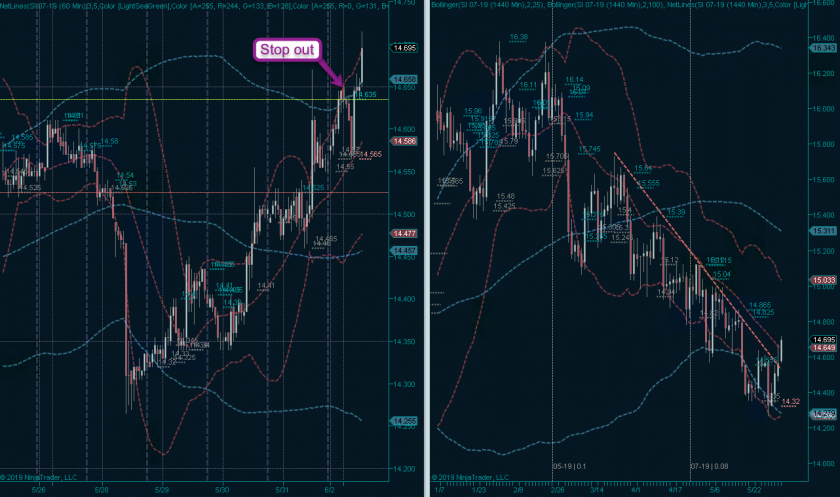 Not surprisingly my silver short is a bust as well. However it was only a small position in anticipation of a possible reversal (as I had looked at gold’s strength when taking the entry). The plan was to grab a long position if stopped out. However instead of waiting for a retest (and in an attempt to cure my personal bias) I’m grabbing one right now with an ISL < 14.55. 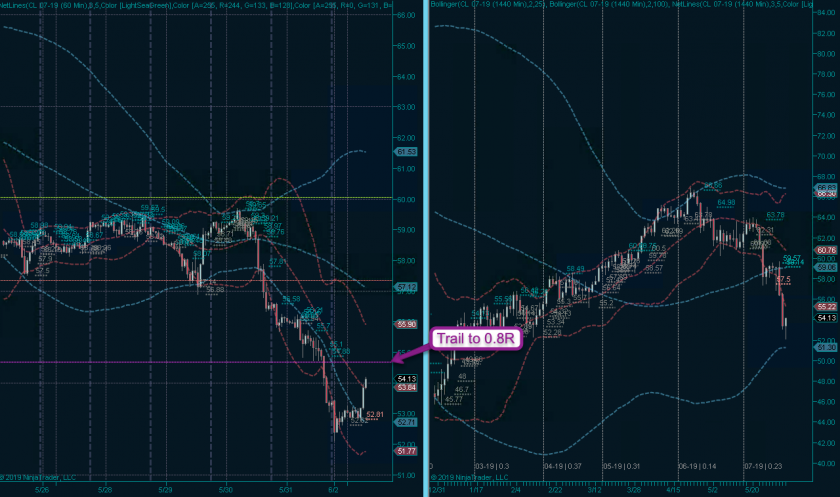 Crude has descended lower and I’m not advancing my trail to 0.8R, which is a slight modification of my rules. Usually I don’t advance beyond break/even until 2R has been reached but since we are looking at a possible floor pattern here (hammer candle) I think a bit of caution is justified. 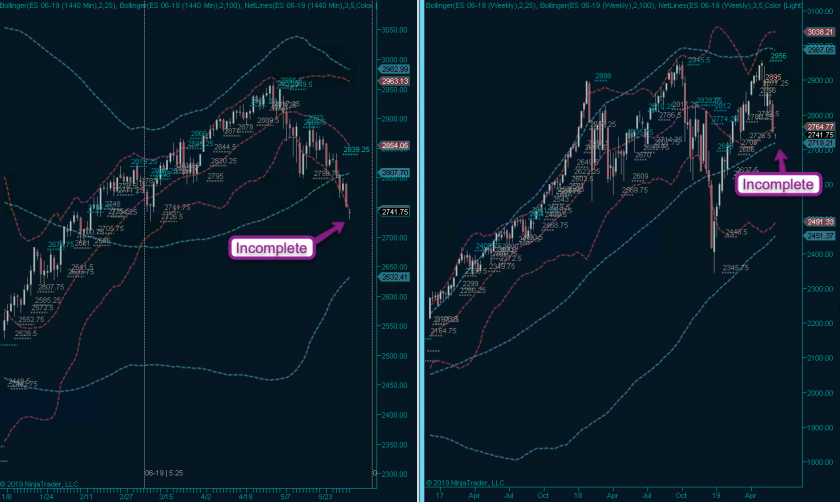 The theme of today’s post is the fact that equities still appear incomplete to me. A drop to ES 2750 – or even better ES 2700 – would give me a bit more confidence that a possible floor is in place. And even then I would not rush into long positions just yet.

Because there is no U.S. law I am aware of that obligates me to be long equities without a pressing reason! 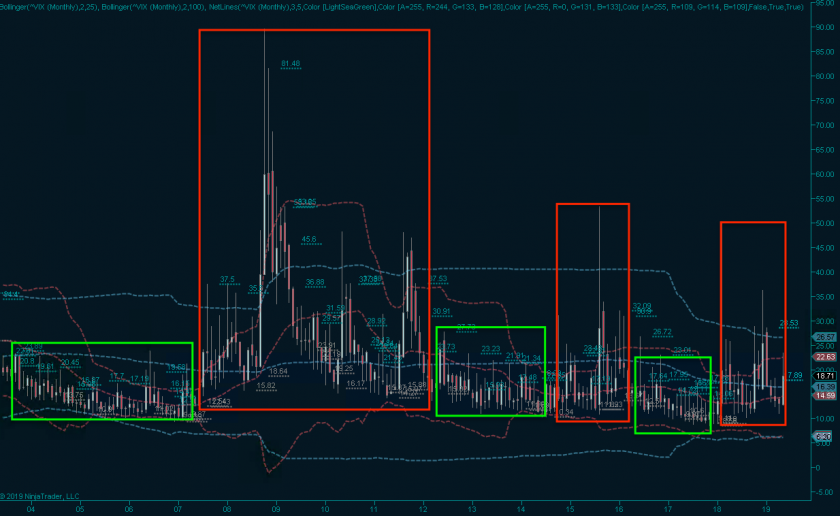 I just peeked at the VIX panels and in particular the monthly chart triggered a teeny weeny Monday epiphany. The green and red boxes I drew attempt to make a point about the state of implied volatility we are currently experiencing.

Would you consider the current equities market a quiet or a noisy one? I agree – noisy indeed – volatility galore. As a matter of fact, on a long term basis we seem to oscillate between quiet and noisy periods – and they seem to span a minimum of two years or longer. Now the one we are currently in began in early 2018 and appears to be ongoing.

The good news is that we’re already in one and a half years at this point. But a reversal into a low volatility bull market at this stage would be early in comparison with the past 15 years of historical IV.

Food for thought (and caution).