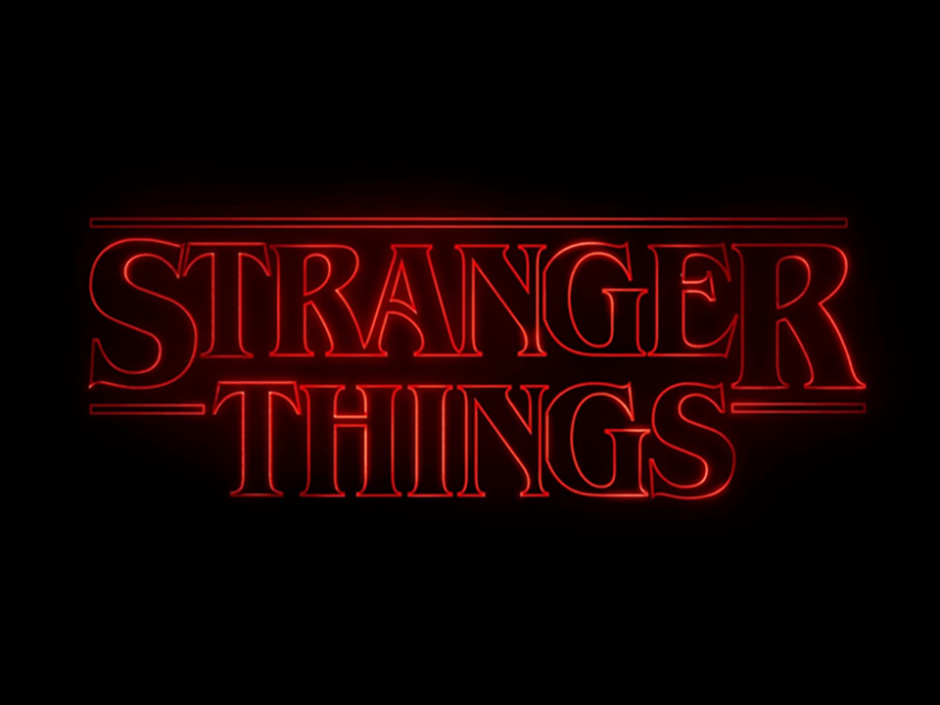 Strange things are afoot again in the equities market. While the ongoing rally in the S&P lost a bit of momentum on Friday we should not underestimate the sheer vehemence of the preceding advance. The notion of an instant reversal here seems far fetched but I’m seeing a few signs that point at a possible late summer party pooper. 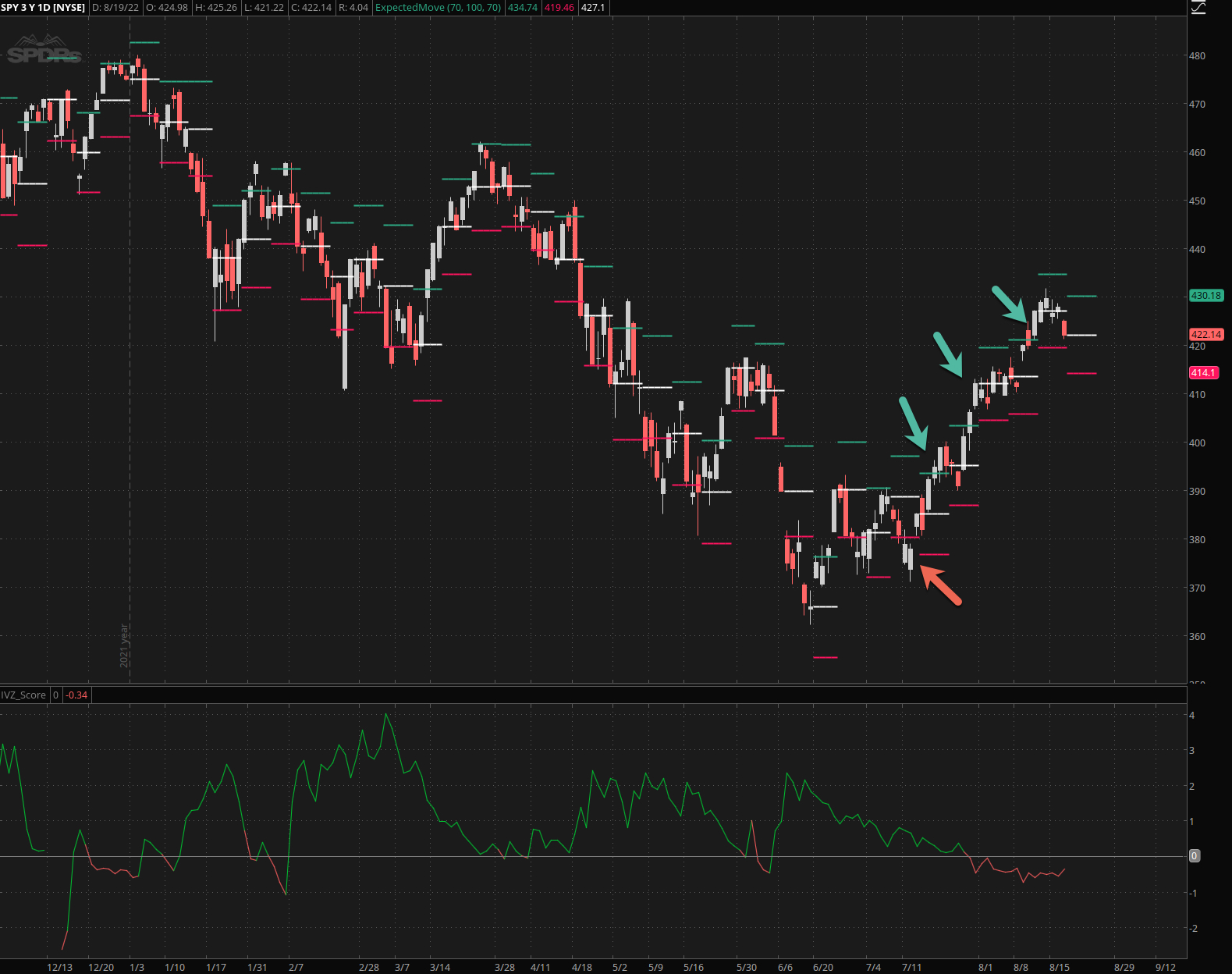 I wasn’t exaggerating about the strength of the advance either. While stocks couldn’t get a bid in a prison holding a fist full of pardons all spring a slight softening in the USD along with the anticipation of dovish backpeddling by the Fed turned the tape on a dime.

Just compare the slew of lower expected move breaches in early June with three instances when the Spiders closed way above their EM. That’s a textbook short squeeze and the reason we pushed 60 handles (600 in the SPX) in the course of five weeks. 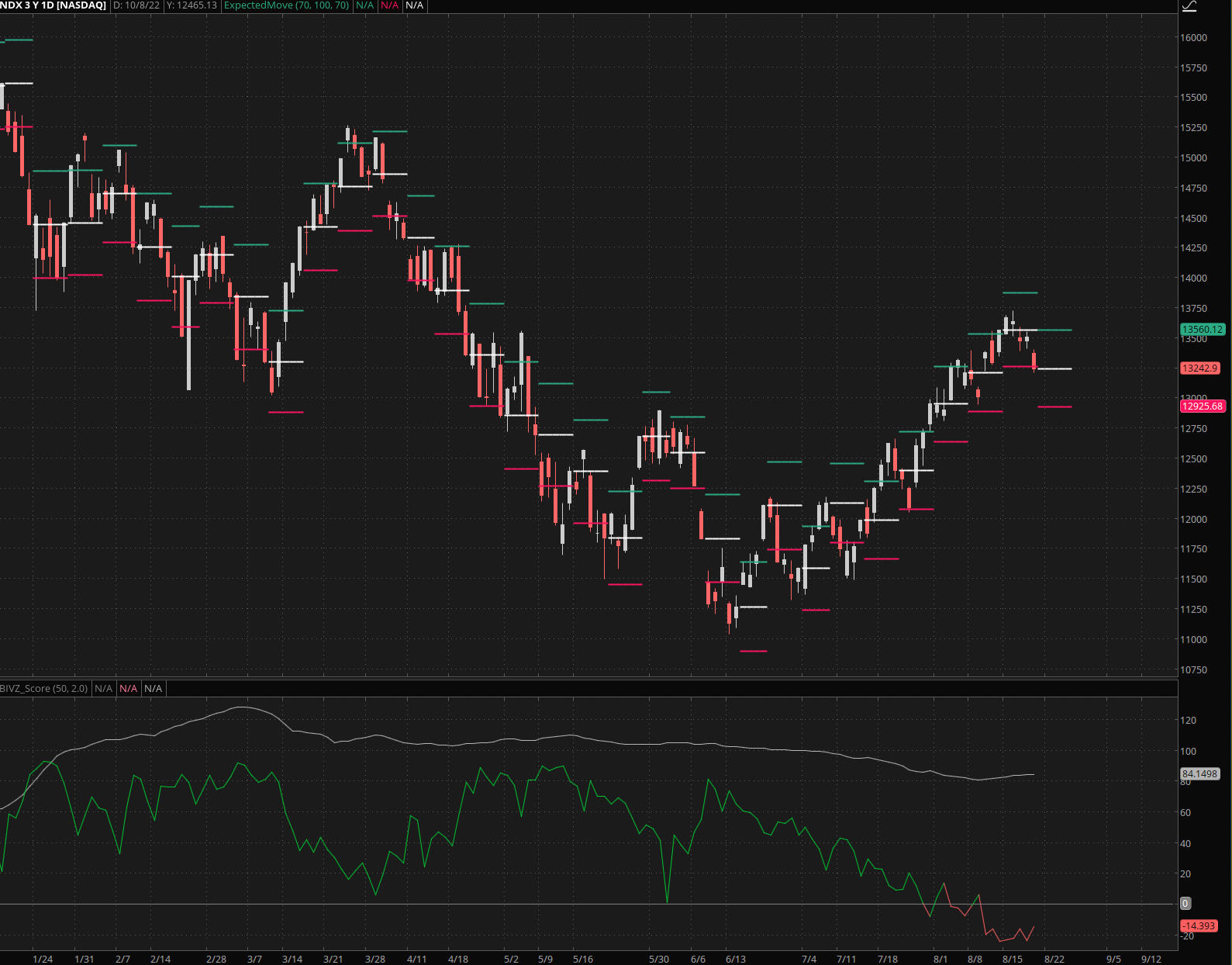 The NDX has been following along but in a much more lackluster fashion. In fact its lower weekly expected move threshold was breached at the close, which is a bit ominous.

Incidentally this chart reminds me of BTC vs. ETH – with the latter taking off like a rocket and the former being slapped down hard on Friday. What leads down and lags to the upside is usually worth shorting first when the time is right. 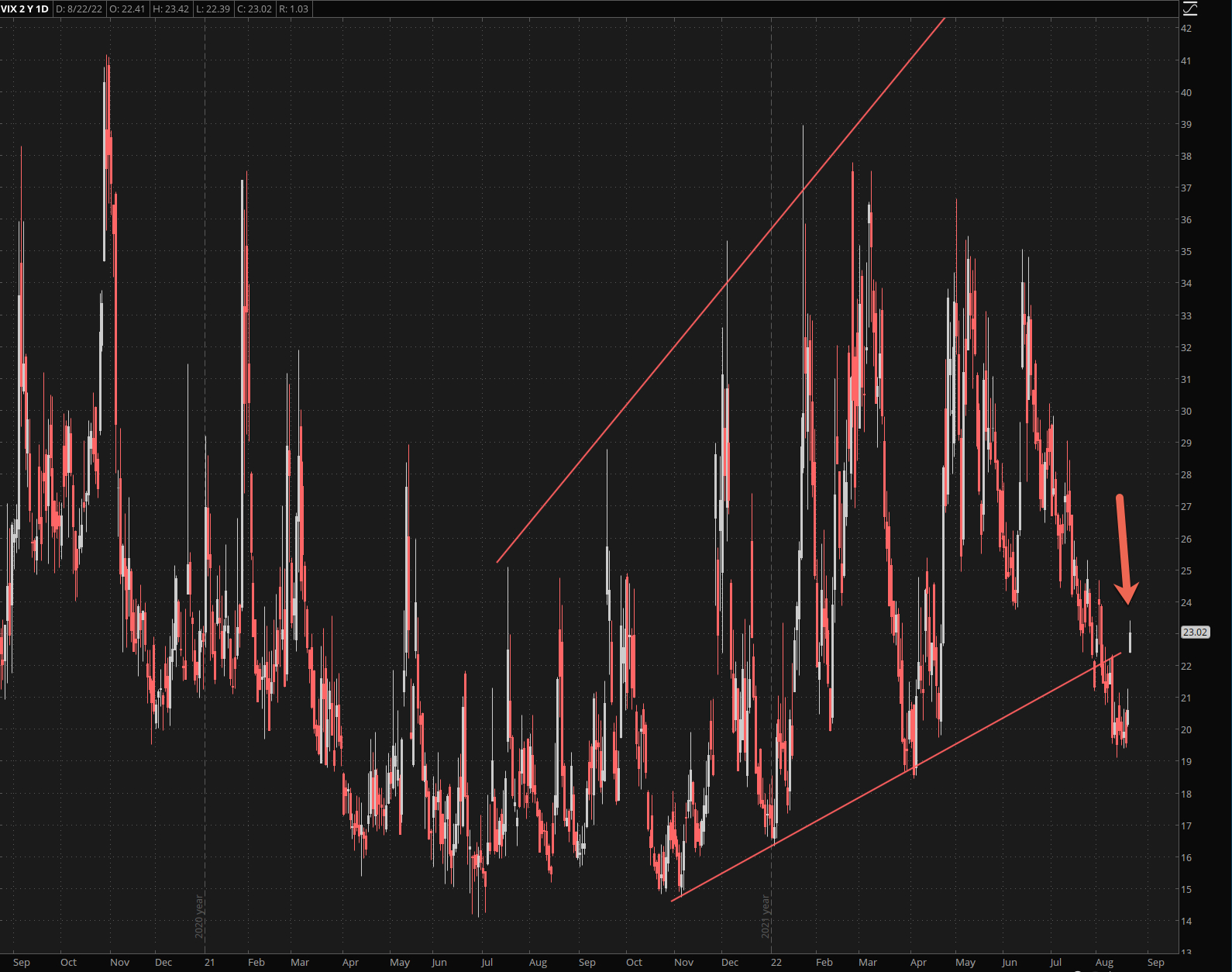 The VIX had been shedding weight since the onset of summer apparently to get ready for bikini season. Then suddenly some disturbance in the force last Thursday and Friday propelled it from a reading of 20 to over 23. This can happen of course but unless we see a reversal here pronto it could be the first overture to another leg higher going into the fall season. 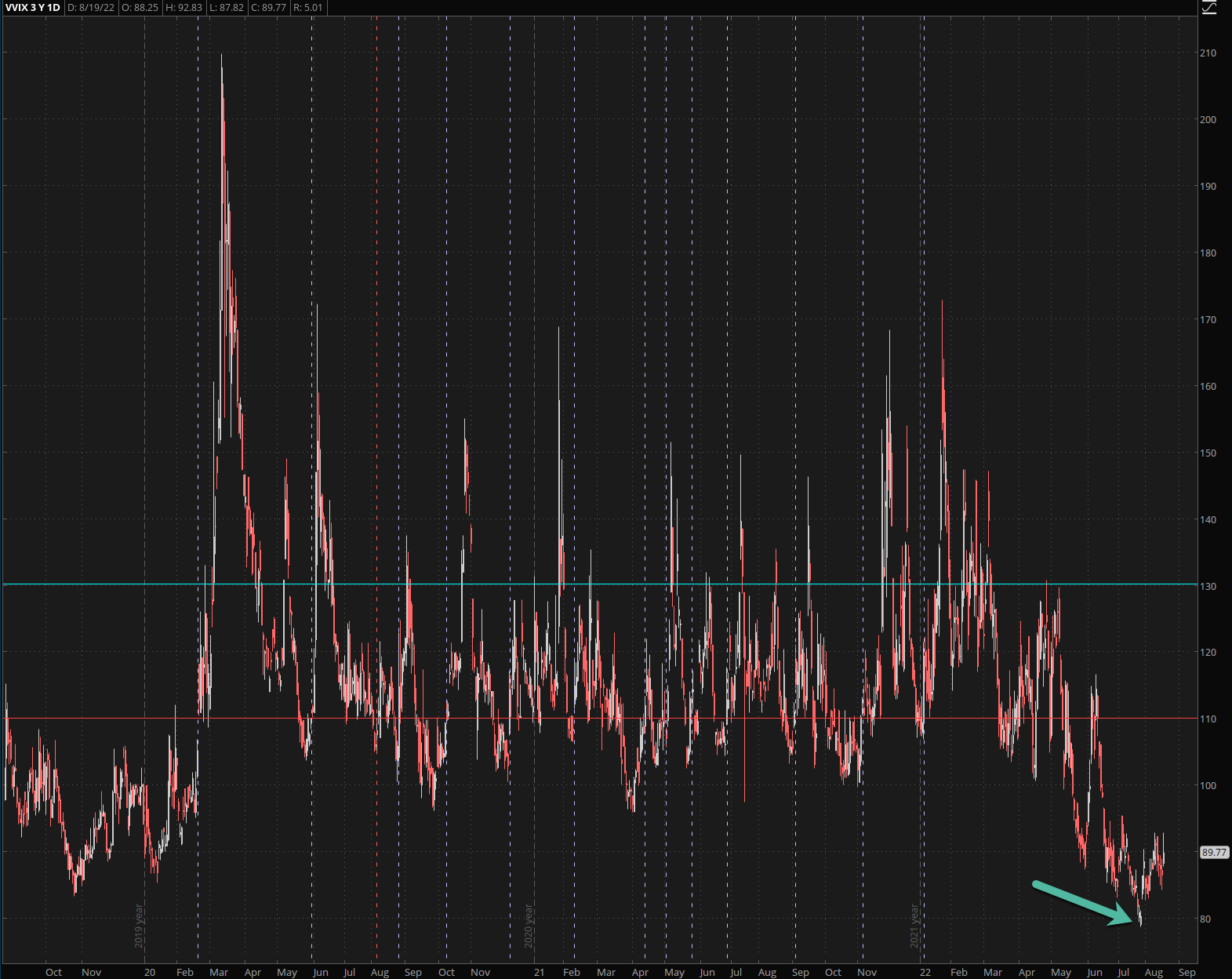 What I haven’t been able to square all summer has been the massive drop in the VVIX, which is now back in good old pre-COVID bull market territory. 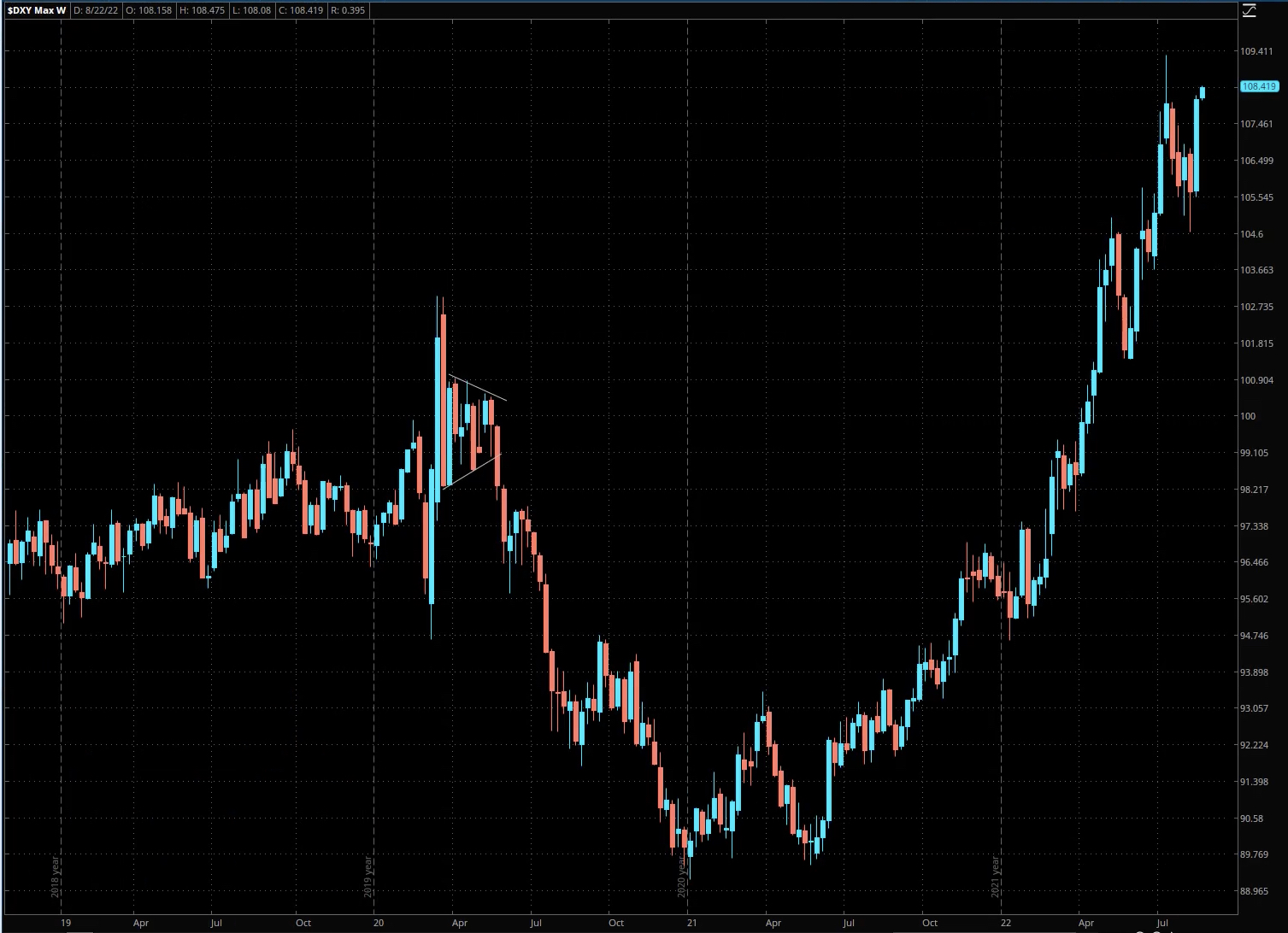 Of course in the end it’s all about the Dollar. After taking a bit of a breather, courtesy of Powell’s semi-dovish mutterings, the old greenback has apparently rediscovered it’s mojo and is now making a b-line for its recent highs.

Here’s a three year chart for a bit more context. As you can see the USD has not been this high going back to late 2003 – 19 years! Of course with inflation rampant across the Western hemisphere it’s merely the slowest falling anvil in the ACME currency universe.

And if you accept that line of thinking then the fact that stocks are ramping higher becomes a lot less meaningful.