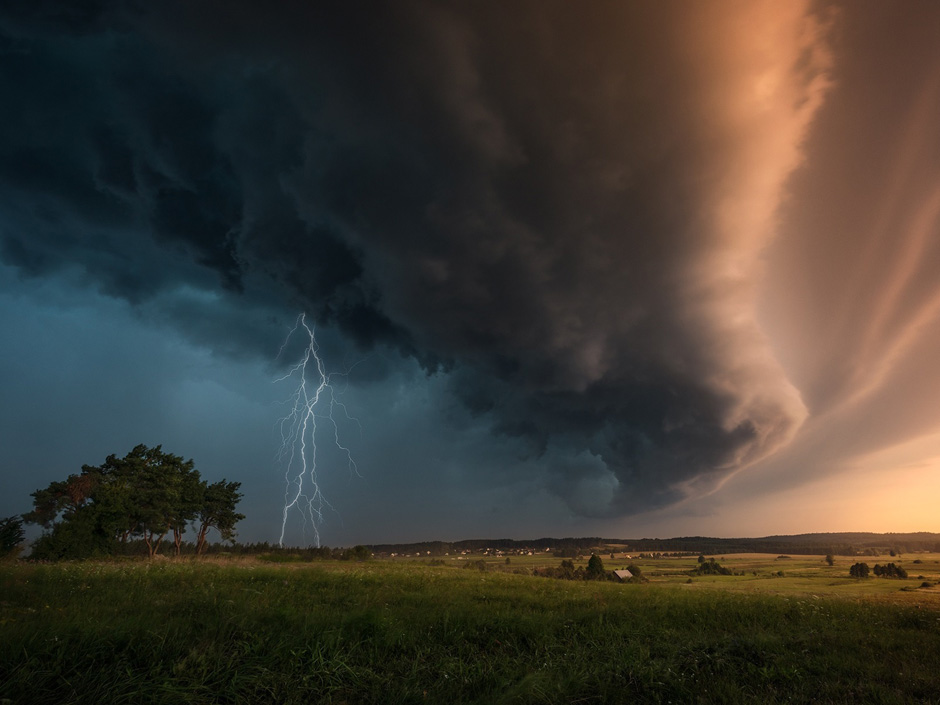 With summer solstice only days away market participants are now starting to shift their focus from trading toward a well deserved time off from the trials and tribulations of the financial markets. A drop in activity of course leaves plenty of opportunity for bot driven shenanigans, especially during a week filled to the brim with volatility inducing market events. In short: caveat emptor. 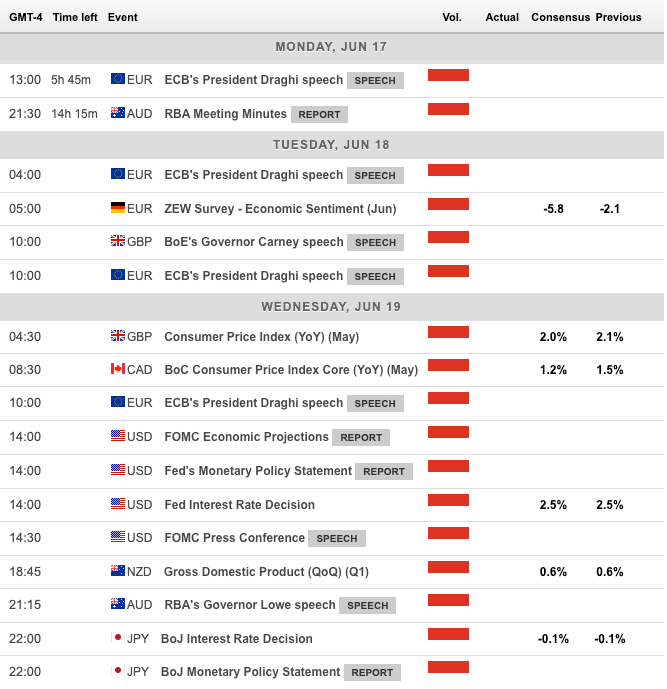 We’ve got not one but three Draghi appearances scheduled all the way into Wednesday, which should be good for quite a bit of whipsaw on the Forex side. And of course the FOMC is also announcing its interest rate decision for the summer shortly after Draghi’s speech this Wednesday. 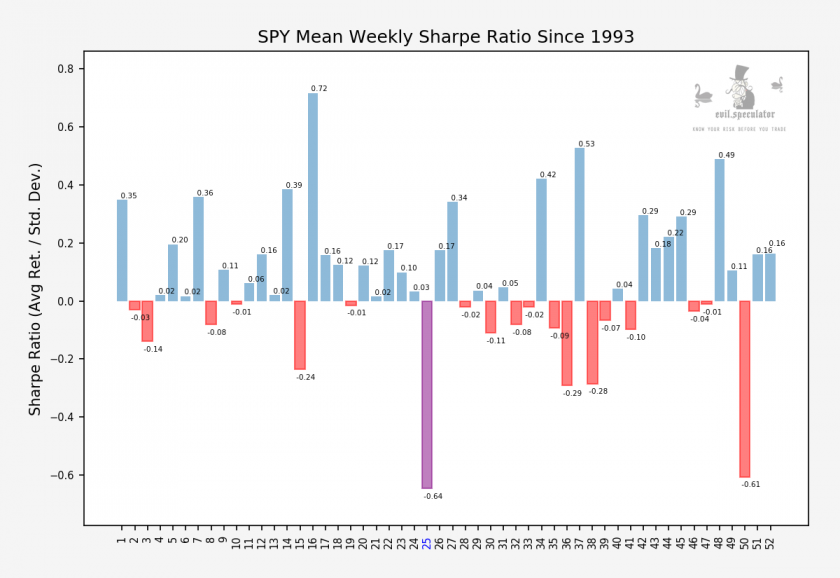 And all this activity couldn’t have been scheduled at a worse time of the year. Statistically speaking we’ve got ourselves a veritable tiger by the tail here as #25 is historically by far the worst week of the year for anyone holding equities. 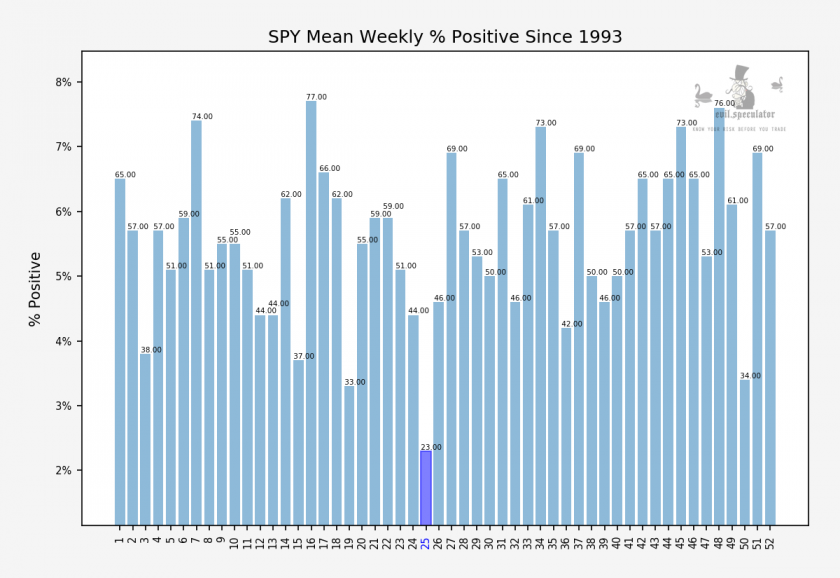 Since 1993 week #25 has only closed positive 22% of the time, so the odds are heavily against continuation higher during this week at least. 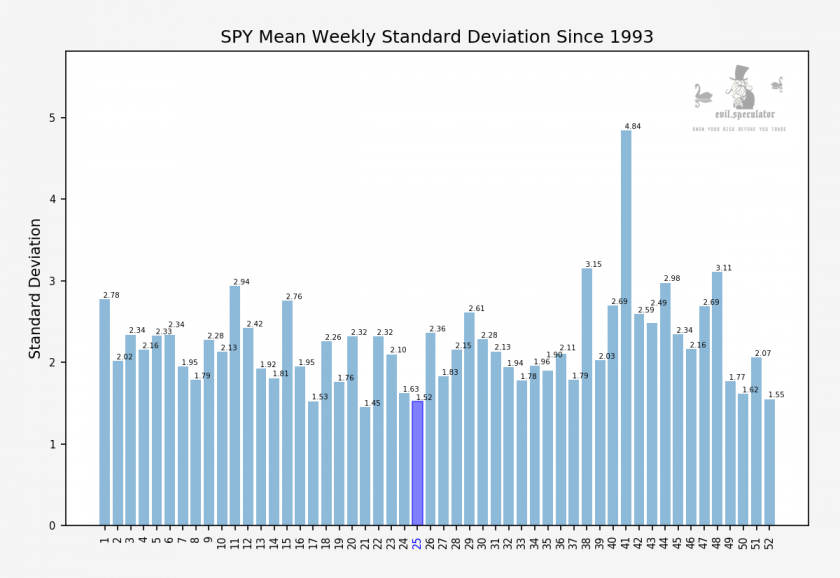 Interestingly standard deviation is pretty low, which suggests that although the odds favor a down week there is less reason to assume a big wipe out lower. 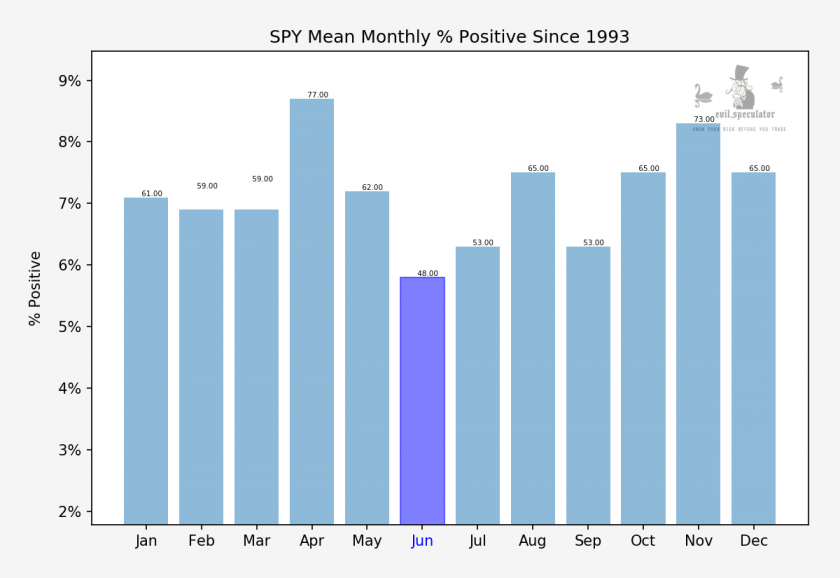 In general June is not considered a time to expect big outlier earnings, as is clearly shown by only 48% of positive closes since 1993. Of course this statistic does not show the percentage of earnings – it’s only a binary measure (up-flat or down) 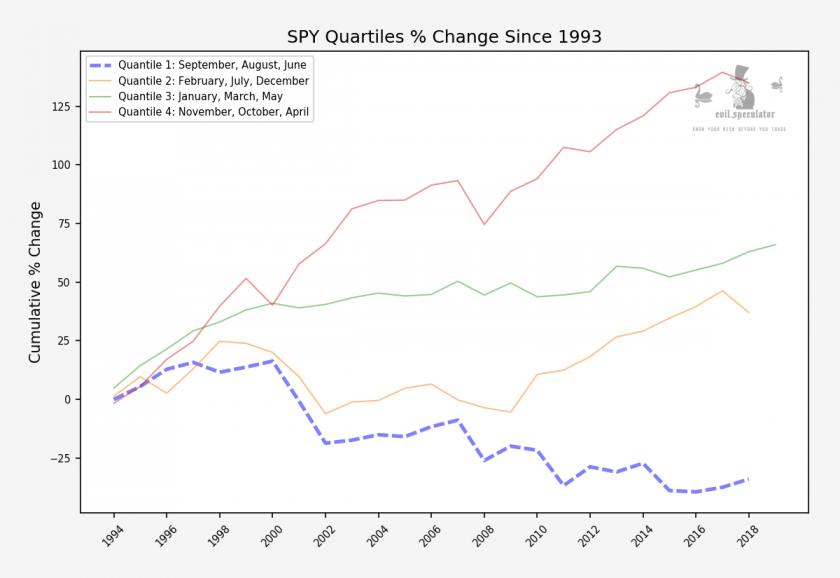 If you separate the highest to lowest performing months into quartiles then June gets grouped with September and August as the only one that has a clear downside bias. Interestingly July makes it into quantile 2 despite only being 53% positive, again suggesting that the earnings must be more significant IF they happen.

By the way, if you’re a statistics aficionado like me then sign up here for a FREE 2-week trail of our Evil Speculator Statistics Tool, instantly giving you access to comprehensive weekly and monthly statistics on thousands of stock symbols on the S&P 500, the Nasdaq, the Russell 2000, the Dow Jones Industrial Index, and more.

To see a FREE sample of all available SPY statistics please point your browser here. 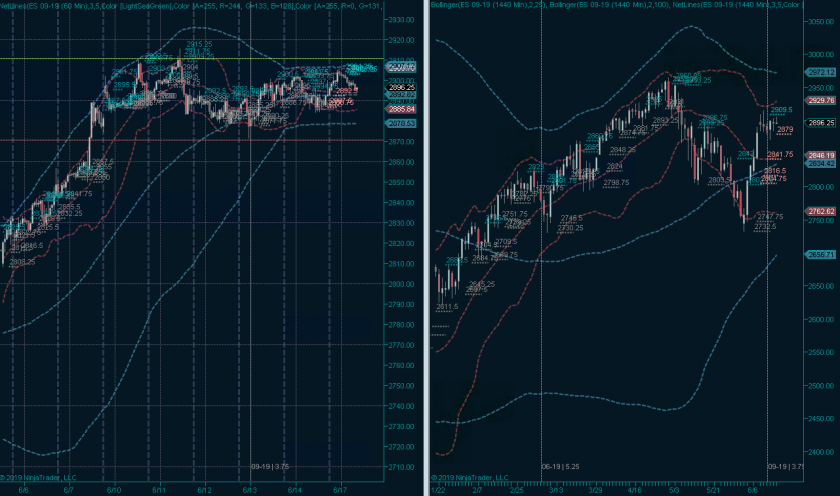 On Friday I presented two entry thresholds on the E-Mini – one for a long and one for a short position. I’m not terribly surprised that we haven’t touched either of them yet as most traders are going to proceed cautiously over the coming days and barring any major news event a sideways churn should be expected.

So I personally am going to give this one a few more hours to trigger either side, perhaps until 11:00pm Eastern. If nothing gets touched I’m canceling this setup as I don’t see any edge in taking my chances during ECB or FOMC announcements.

In general this is going to be a quiet week for me as I have a lot of work to catch up with in anticipation of releasing my Price Action Master Class a few weeks from now. It was actually all filmed about a year ago during spring of 2018 and I just worked through it again over the weekend. I needed to replace the intro and a few other things as I have teamed up with Tony to launch Red Pill Quants later this year.

Watching it now again I honestly think it’s some of my best work thus far and a hell of a lot of time and effort (and my wife’s make-up*) went into producing it. Which is why I am very much looking forward to making it available to my own crew here first, before anyone else gets to see it 😉

* J/K – truth be told I actually tried it once and I ended up with a horrible rash all over my face, so y’all have to put up with looking at my wrinkles.