I call this a perfect weekend: Yesterday was my birthday and the weather here in L.A. has been close to 80 degrees Fahrenheit (ca. 24 Celcius) – not a single cloud in the sky. This why this Teutonic Rat loves to live in Schwarzifornia – as the rest of you guys are freezing your butts off while scraping ice off of your windshields we’re busy organizing spontaneous grill parties under clear blue skies. Mix in some short skirts and a few bottles of Jägermeister and the thrill of writing market forecasts suddenly loses its luster.

So, we better get started – it would be a sacrilege to spend the day in front of a monitor: 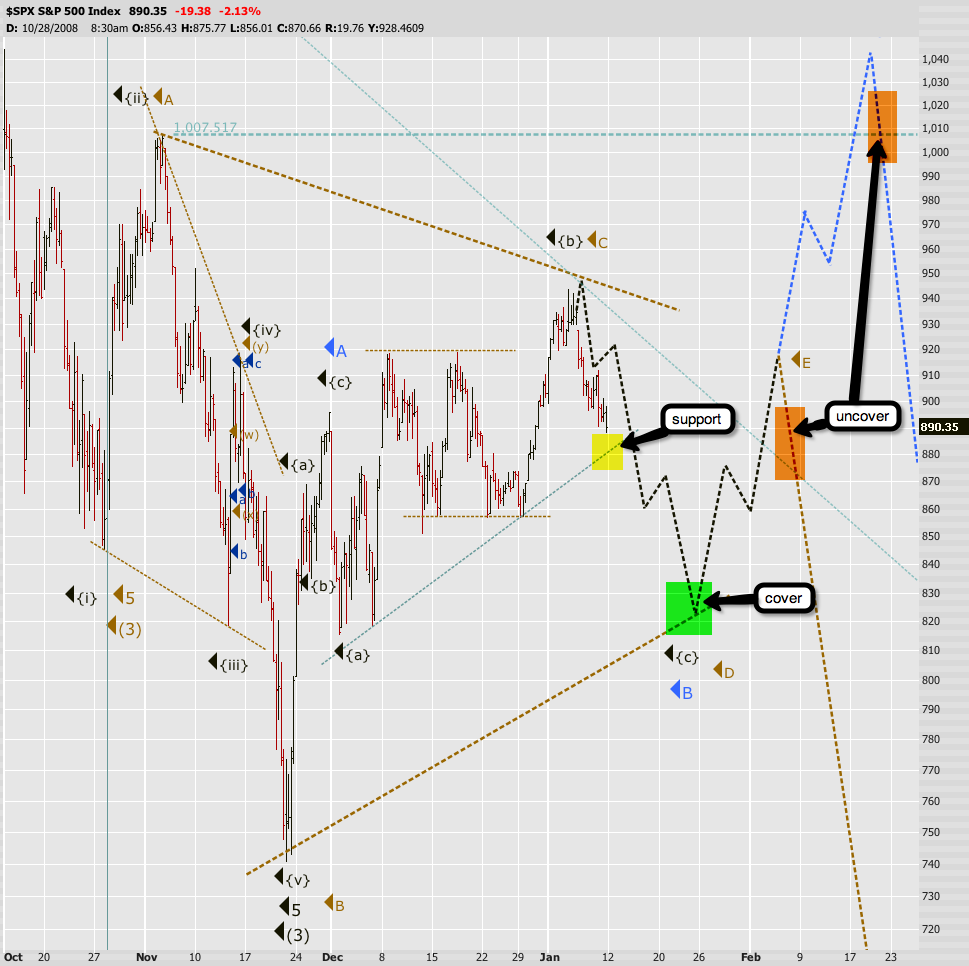 The weather map for equities has been resembling the U.S. East Coast (cold and snowy) and it seems that it’s about to get a lot more uncomfortable for the bulls. Thus far we remain right on track – don’t you love it when an evil scheme plays out as planned? We didn’t get 950 but fortunately we had the prescience to load up at 944, which thus far has been very profitable. My June/March puts are already producing about 40% in profits, which isn’t too shabby at all as they are pretty far OTM. It’ll get only better going forward.

On a more short term basis on the SPX we have in sight now a diagonal support line which we will need to breach in order to continue our trajectory towards the first turning point at about 820. So, I would expect some turbulence around 880 Monday or Tuesday (to continue with the weather theme) as I don’t expect the bulls to give this one up laying down. Breadth has been distinctly bearish on Friday but not as much as during the Wednesday drop, so I believe that there is plenty of downside potential. But momentum has been pretty flat and choppy since January 2nd, so I remain a bit on guard for potential surges to the upside.

Marked on the chart you also see an area I labeled as ‘cover’. What does that mean? Once we reach 830 I plan to sell some puts against the March/June puts I’m holding. Basically what I’m going to be doing is to protect my current profits by turning my puts into a delta neutral vertical put spread – not to be confused with a bull put spread.

Grfner explained it best and I’m going to re-post a slightly edited version of his comment:

What I did (and this is the way I hedge) is buy the SPY Jun 700s puts & sell the SPY Jun 690 puts ……this can be done as a combo or spread. This a called a delta neutral vertical put spread. Neutral is selling about 10% more. This can be modeled in TOS under the Analyze tab.

As the SPY price rises, the puts that you’ve sold MAKE dinero. [When we touch the ‘uncover’ area’] you buy back the sold puts and let the downward momentum explode into humongous profits.

While the SPY price is rising the net effect of the trade will be zero but profit will grow on the “sold side” of the spread.

I don’t know about you guys but I’m a visual person, so let’s take a look how this would play out on the trusted TOS simulator – let’s strap in for some financial VR Jaron Lanier style. 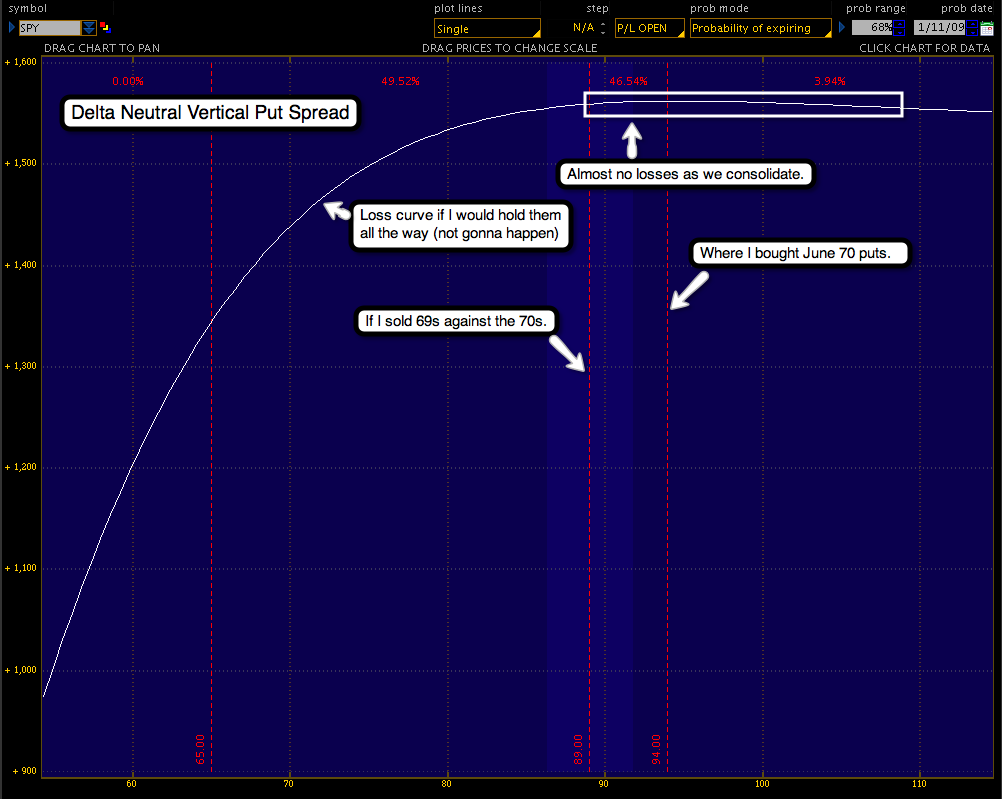 I think that this explains it nicely. Here you see what would happen if I would have sold June 69s against my June 70s last Friday. There is some loss if we drop lower but the in monetary terms it’s actually not so bad compared with the profits I already banked. What’s mostly important is what would happen if we suddenly reversed into wave E of the triangle right here (again, which I don’t expect that until 820) – basically nothing – the profit curve is flat as a flounder. Please note that for this strategy you would have to sell about 10% more than you bought, otherwise you won’t be fully hedged. 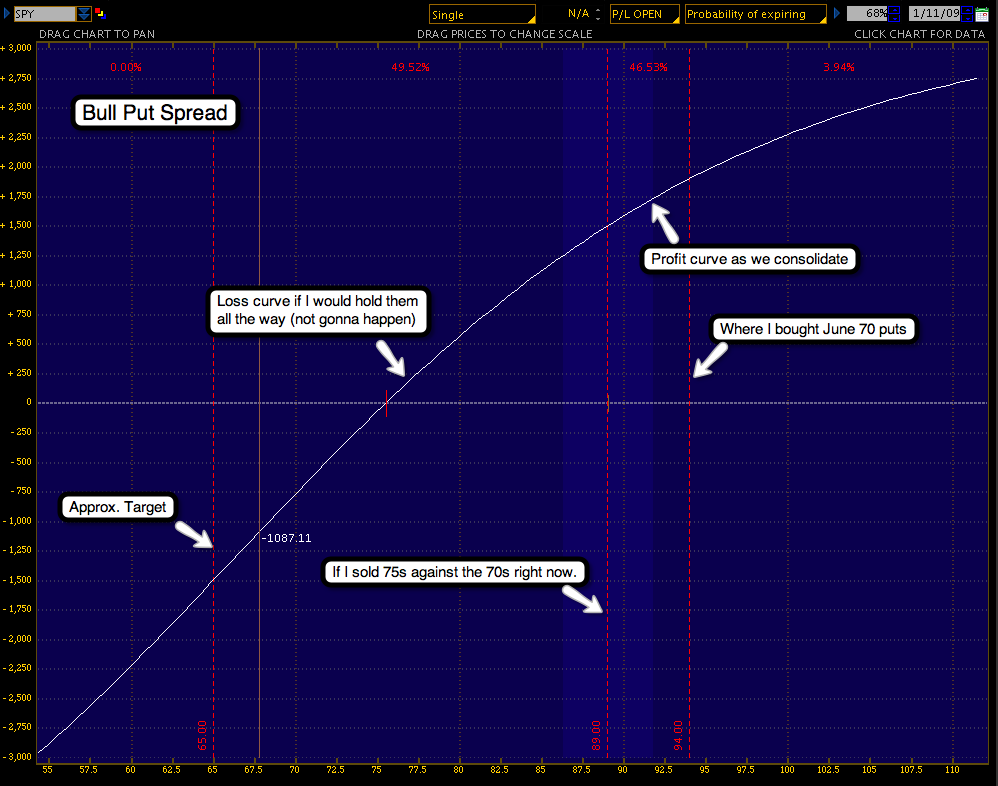 Now let’s compare that with the more commonly known bull put spread, which is also known as a vertical credit spread. You basically would sell the same amount of  June 75 puts (or any strike above 70) against the 70 puts you bought last week, thus turning your long puts into a bull put spread. So, if you bought 20 puts on Monday you’d be selling 20 puts when you’re ready to hedge. The graph above shows what would happen had I sold those puts last Friday – we would lose comparatively little money if we continue to drop but actually bank profits should we push to the upside.

Bear in mind that credit spreads however have a margin requirement. Here’s how you calculate your margin on a bull put spread:

I’m not really a very frequent spread trader – mostly use them for hedging purposes, but it seems that in this particular instance the margin requirement would be around $284. So, if you bought 20 of those 70Ps it would have required you a $5,684 margin to cover those on Friday.

But it could have been worse: Would I have bought those 70 puts at 3.25 concurrently whilst selling the 75 puts at 4.25 last Friday (a traditional bull put spread) the equation would have changed as follows:

So, the margin requirements for each option would even have been higher by $116. 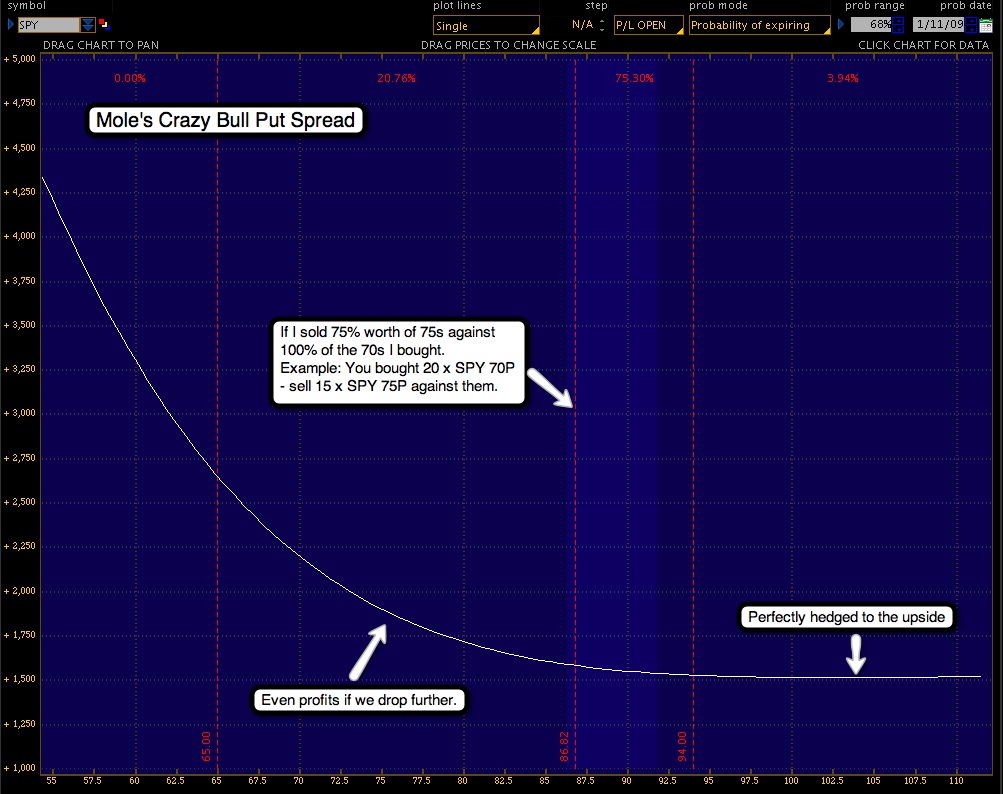 But wait – there is more! Here’s a slight variation of the bull put spread which I hereby name Mole’s Crazy Bull Put Spread. Again, this assumes that you bought those puts last Monday/Tuesday right at the top. What you do as soon as you are ready to hedge is to sell 75% worth of the amount of the puts you’d sell in a regular bull put spread. So, if you bought 20 x SPY June 70P last week you would sell approximately 15 x SPY 75Ps against them. Now, you can use any strike above 70 of course, as this is your choice – this will affect the graph, so do your own analysis to make sure you get the results you are looking for.

What I like about this strategy is that you stay perfectly hedged but actually make money if you didn’t pick the turning point and we continue to drop. Or, if the whole triangle scenario or even the blue scenario (a bullish expanded flat) turns out to be a no-show and we continue to drop into intermediate wave (5) then we would be able to buy back our SPY 75Ps after breaching important support zones.

Another added advantage of this one is that you are selling fewer puts and thus your margin requirement shrinks by about 25%.

Again, to make sure there is not confusion – I’m not advocating to sell these puts right now. My personal strategy is to start doing that once we reach 820 on the SPX. Finally, please note that the above does not account for changes in volatility (VIX and/or IV), thus your mileage may vary. 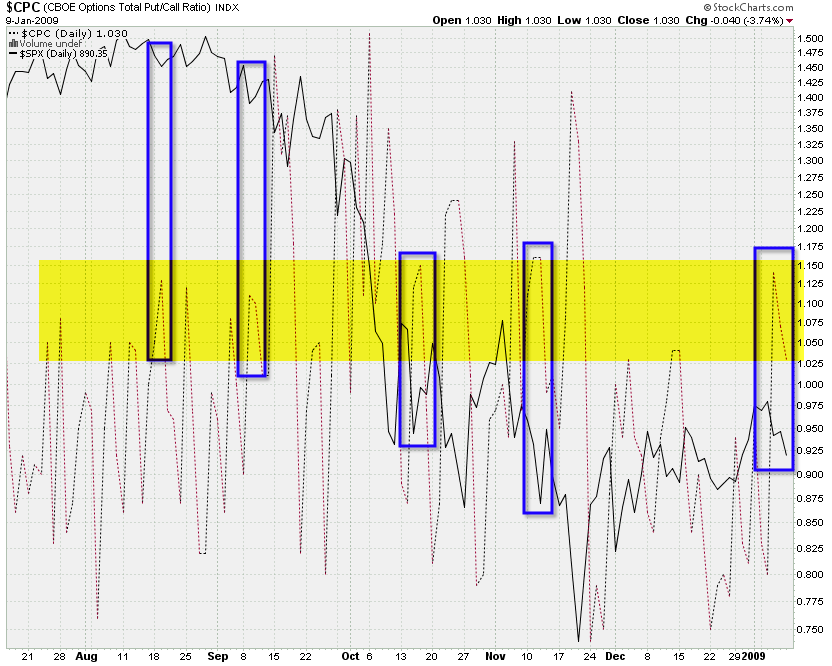 Now, it’s time again take a look at the Call/Put ratio. Since last week we actually pushed down a little, which indicates that a good number of our mouth breathing colleagues expect to see an Obama inauguration rally this week. I have also market previous occurrences of the current levels for orientation. Usually we dropped, then rallied, and the dropped into the abyss. Just what we are expecting to happen going forward. 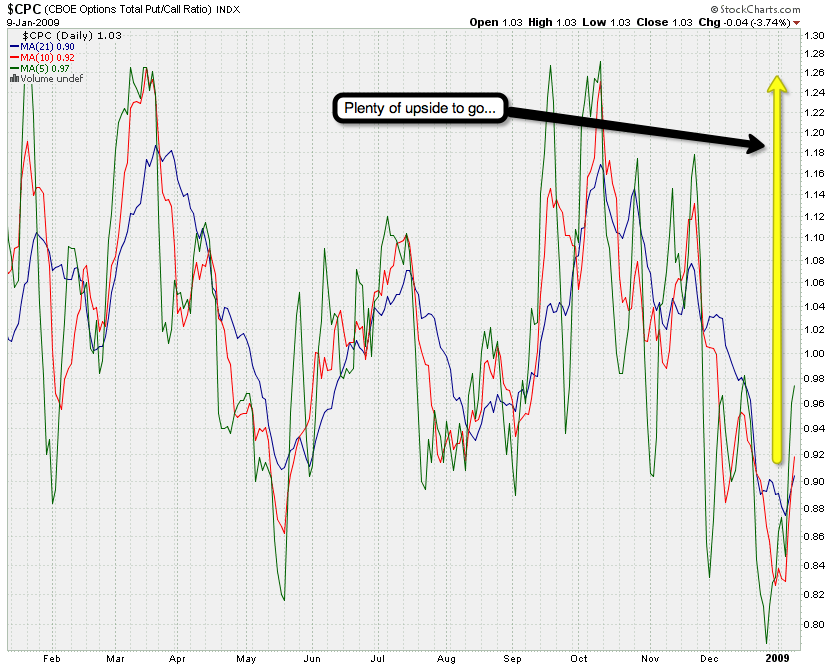 The MA chart is a bit more revealing IMHO – we definitely have been retracing from those year end extremes but there’s plenty of upside remaining. In addition – we will probably see a drop here once we reach the bottom of the current D wave. 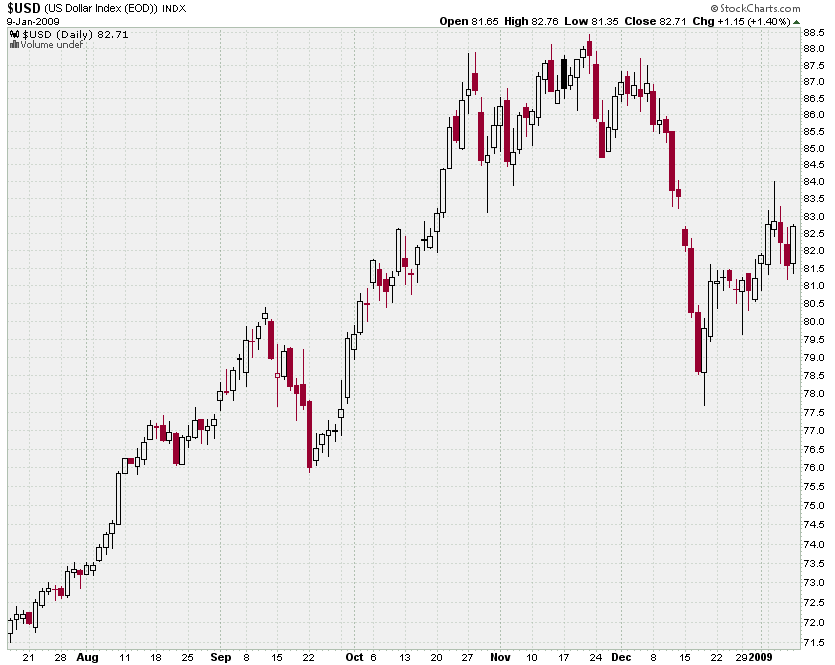 Not much to add to last week’s Dollar forecast – it seems we’re putting in a series of 1,2s to the upside. Friday’s push might have been a first step towards a 3 of 3 rally which would mean we should now see some significant gains in the coming days. If we drop more than a few points from here I would have to question my wave count but thus far we seem to be on track. 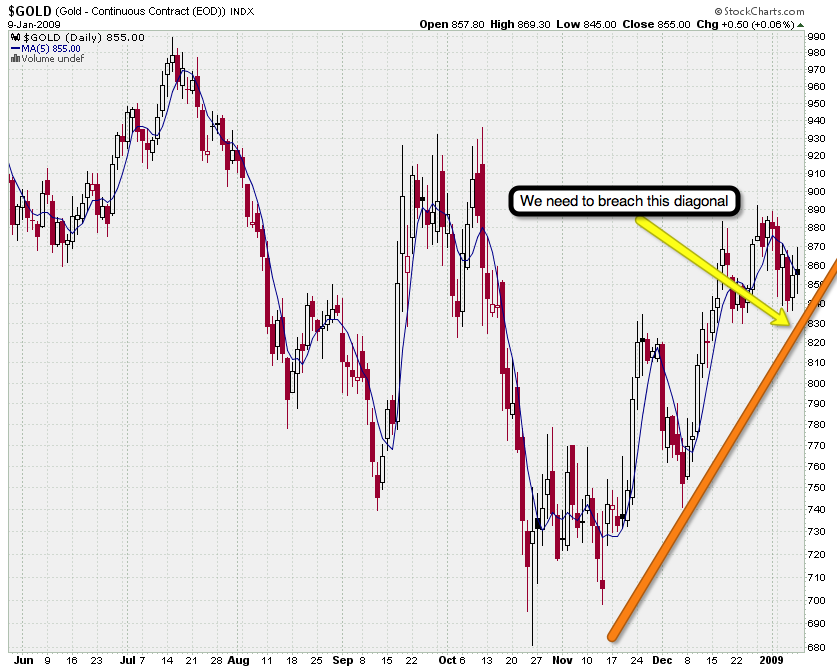 I have to be honest – Gold has been bugging me lately. It’s remained very stubborn despite the recent Dollar drop. Now, if you grabbed puts at the top as I’ve recommended then you’re still in good shape. But taking a step backward and looking at the six month chart I don’t see a break of the recent uptrend yet. We need to finally breach that diagonal I’ve drawn on the chart above, which would confirm our assumption of a drop towards the 650 zone. Until that happens I would keep my exposure limited. On the upside – once we breach that diagonal it should pose strong resistance and shorting Gold slightly below that line should be a very defensible position.

Remember – I’ve said this numerous times before: Gold drives everyone nuts for weeks on end and then suddenly whips in one direction or the other. There’s no perfect entry and it always comes down to lesser of many evils. If you’re a gold bull this diagonal should also be your line in the sand.