1. Sun Tzu said: The art of war is of vital importance
to the State.

2. It is a matter of life and death, a road either
to safety or to ruin. Hence it is a subject of inquiry
which can on no account be neglected.

I will continue to quote Sun Tzu going forward as it is the most essential rule book written for conducting strategic warfare (no, not the shit they’ve been playing down in Iraq or in Afghanistan). I might also point out that Sun Tzu predates the new testament – so, it is written by someone who lived in a time when war was a real, ever present, tangible, ugly, and daily reality of his life. And make no mistake – trading, just like business, is war. We don’t take prisoners – and in the end, no matter what anyone tells you, only victory is what counts. You don’t get a gold star for participation and no – we can’t all be winners. The market is a zero sum game. Brutal? Yes. Life is not fair – sorry, your great kindergarten teacher was full of shit. 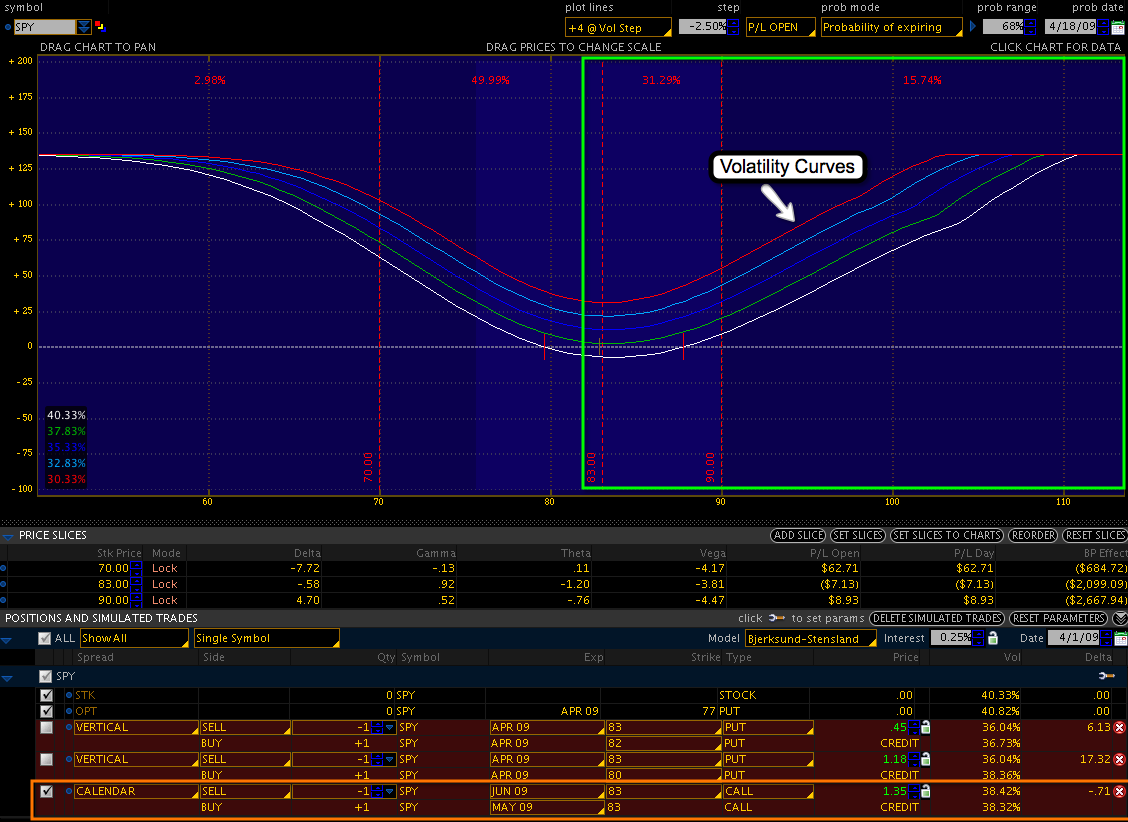 Let me introduce you to our first strategic monstrosity – the reverse calendar spread. I could start explaining this beast, but frankly, I had to read this text several times back when in order to fully digest it.

So, the idea here is that we want to play the long side. But we have an enemy that eats volatility, let’s call her Miss Vega. She’s a wonderful mystical creature but she’s got a nasty habit of devouring profits on call options despite price moving your way. She loves to strike when volatility is very high – that’s when her powers are most lethal.

One magic weapon that can defeat her is a strategic maneuver called the ‘reverse calendar spread’. You see, calendar spreads are bit arcane to begin with and are usually used to exploit periods of inactivity in the markets. December would have been a good time to buy some calendar spreads as you don’t want prices to move beyond your profit zone. If you expect the inverse – namely a big move in price coupled with a hefty drop in implied volatility it’s ugly cousin, the reverse calendar spread might just do the trick.

What we basically have here is a credit spread – but one that increases your profits as volatility starts to drop – therefore defeating Miss Vega. The idea here is to get out of your spread about one month before the near term leg expires – you don’t want to hold it much longer than that (there’s probably ways to play with that but I’m the first one to admit that I’m not an option spread aficionado – ask Mrs. Fujisan). The volatility curves are increments of -2.5%, so you can see how Mr. VIX dropping into the 30s might add to your profit margin.

I suggest you read that tutorial I provided above and also play with the analyze tab in ThinkOrSwim if you have access to that. I’d like to see especially Fujisan to chime in as she’s a professional spread trader. I would also like to hear what some of you other senior traders have to offer. While you guys do that I start working on the plain old Bull Put Spread, which I’m posting next. 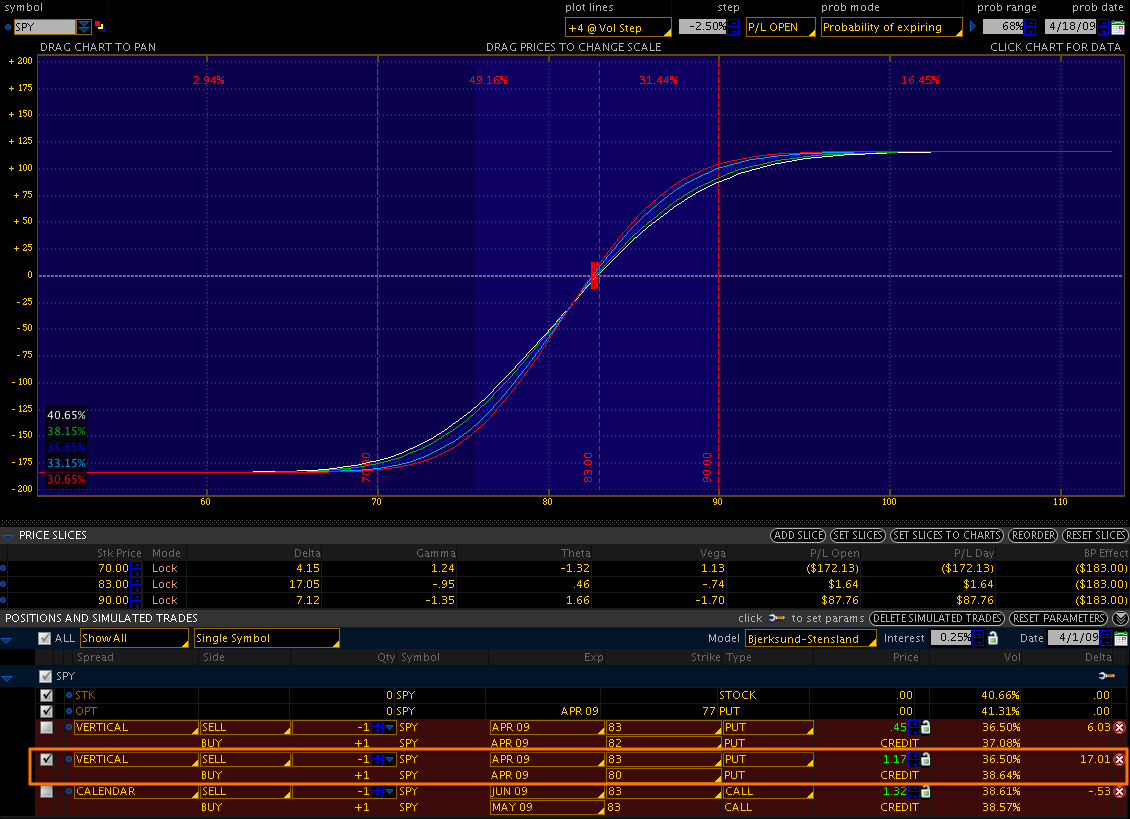 Next on the menu we have the good ole’ ‘bull put spread’ – OX has a good page on it. It’s just like the vertical bull call spread in that it’s got limited profit potential but again, it’s a safe way to play the long side and not get hit in the ass by Miss Vega closing in on you. The maximum loss would be the difference between strike prices less the premium you received. 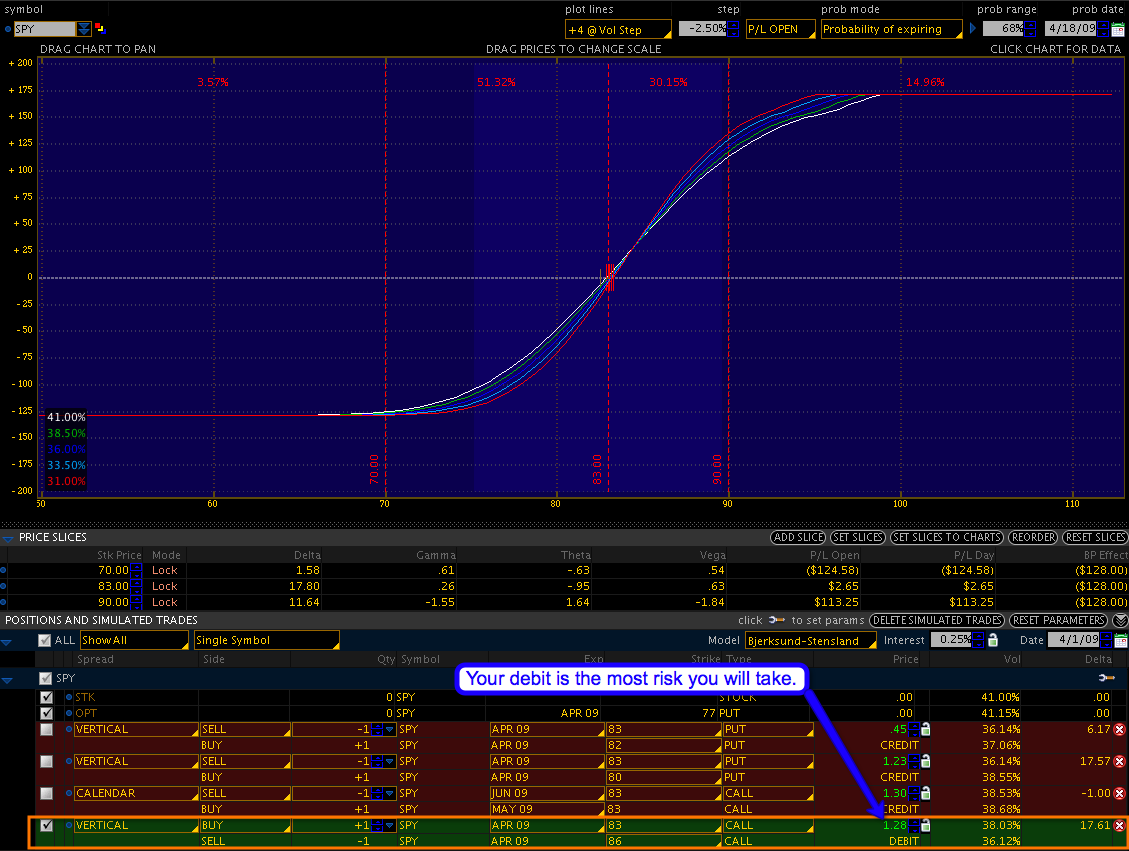 And finally here we have what most folks start out with – I call it the vanilla of all options spread strategies – the ‘bull call spread’. That one is almost too easy compared with their more exotic cousins, isn’t it? See, I usually start with the most difficult subject and work myself down – nothing like a good challenge, right? 😉

BTW, the one big advantage of debit spreads is the maximum loss is the net debit you paid if both options expire worthless. Doesn’t that make you feel all warm and cuddly?

UPDATE 3:00pm EDT: Attention futures traders – we are now at or slightly below VWAP on the ES and the NQ. Either we bounce here hard or it drops through and we see a sell off. I for one will not play the short side going forward. The plan is to start legging into bullish positions during dips.

UPDATE 3:51pm EDT: For all you proponents of the long term bearish trend: Breadth on the SPX right now is a ratio of 7.5:1 advancing issues. That’s bullish market sentiment, period.

BTW – I’m going to do the wrap up a wee bit later today as Mrs. Evil is waiting with lunch 😉