No worries – telegrams don’t always mean bad news. It’s just that I haven’t seen the inside of a gym for days now and still have a bunch of chores to take care of this evening. So, I’ll be lightning fast and will probably continue my abbreviated Sunday posts through the (boring) summer – hey I need some time off too, you damn leeches!! 😉

But before I dive in I would like to thank Fujisan for her amazing Saturday post – if you were missing in action this weekend, make sure you go back and read it – great stuff and even better – her medium term outlook matches one of my wave counts (i.e. Soylent Orange described below). 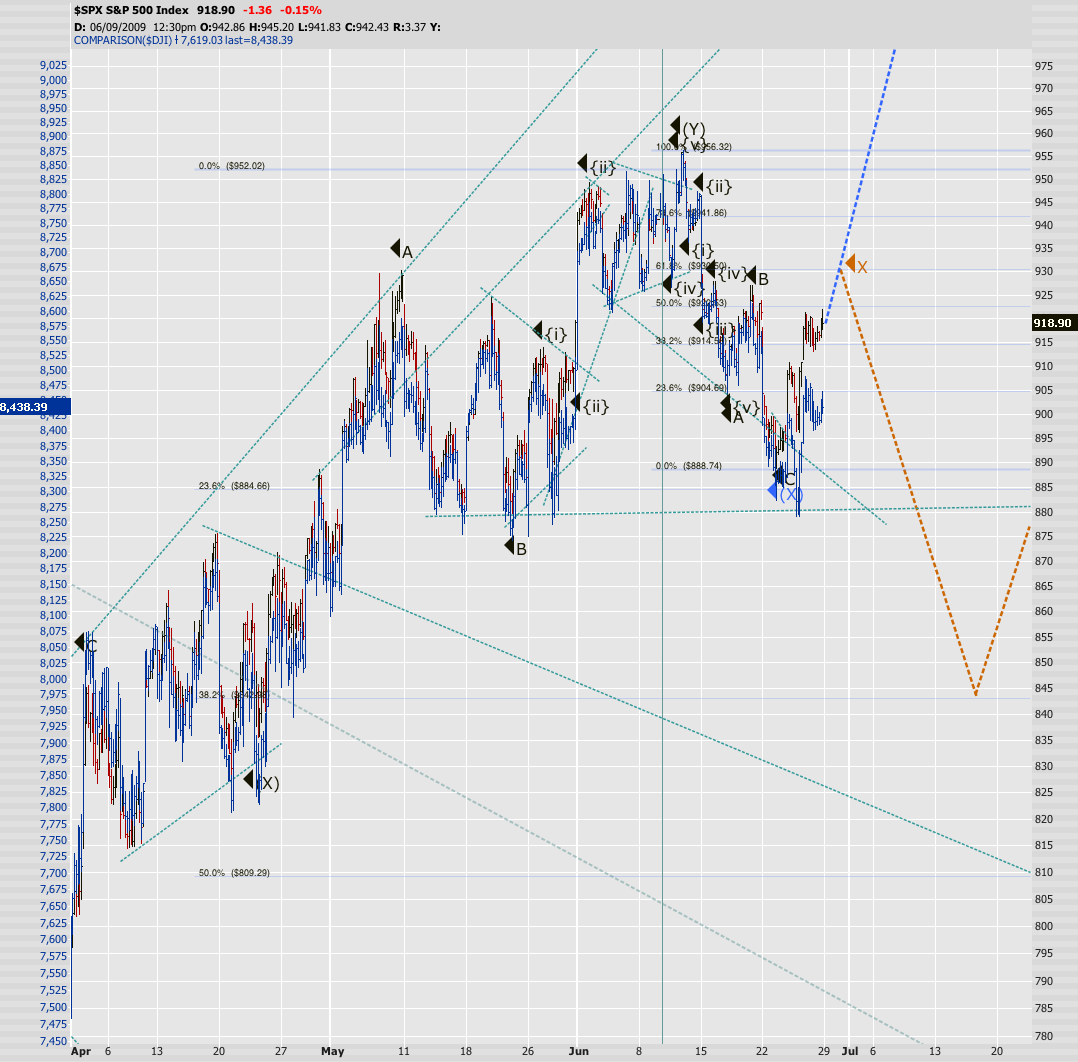 I’m going to spare you the pep and trading psychology talk this time around as we’ve covered market sentiment in exhausting details in the past few weeks. Yada-yada-yada – what else is new: We still have not consolidated to any meaningful degree and buyers have been quick to step in on this drop as well. My decision to cash out towards the bottom turned out to be a good one but that doesn’t mean that further upside is guaranteed.

I wanted to show you something very interesting and thus have stacked the DJI on top of the SPX. What stands out immediately is how much the DJI has been lagging the SPX. But here’s where the plot thickens: 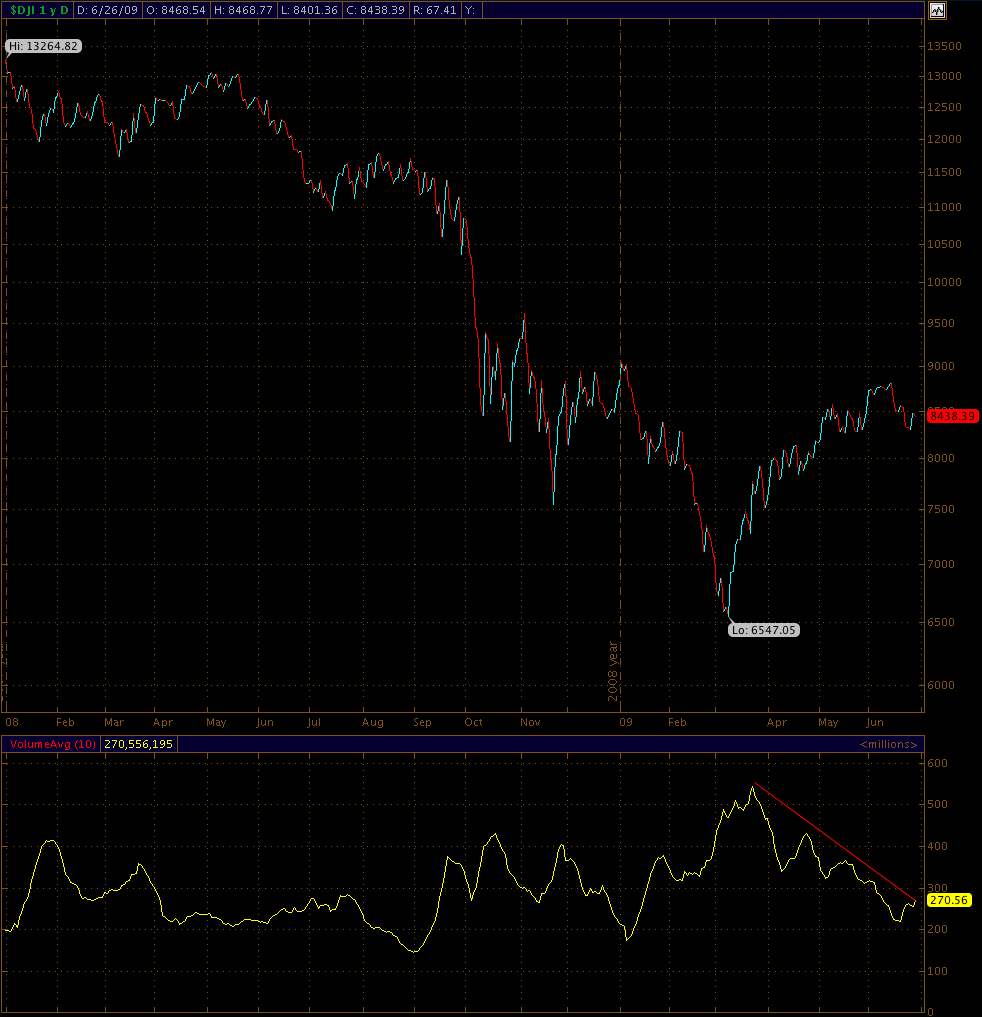 Since the end of March average trading volume on the Dow has actually dropped – isn’t that something? And we’re not talking a 20% drop here – this takes the concept of ‘running out of steam’ to a whole new level. Which makes me wonder – where’s all that participation thats supposed to push this new ‘bull market’ (ahem) into the stratosphere? Maybe I’m wrong but it still seems like we need a bit of a sell off here before the permabulls are willing to jump back in. Right now all the smart money seems to have moved to the sidelines.

Wave counts – I have three on a longer term basis and two on that are of interest going into next week. For the short term count let’s look at the SPX only: 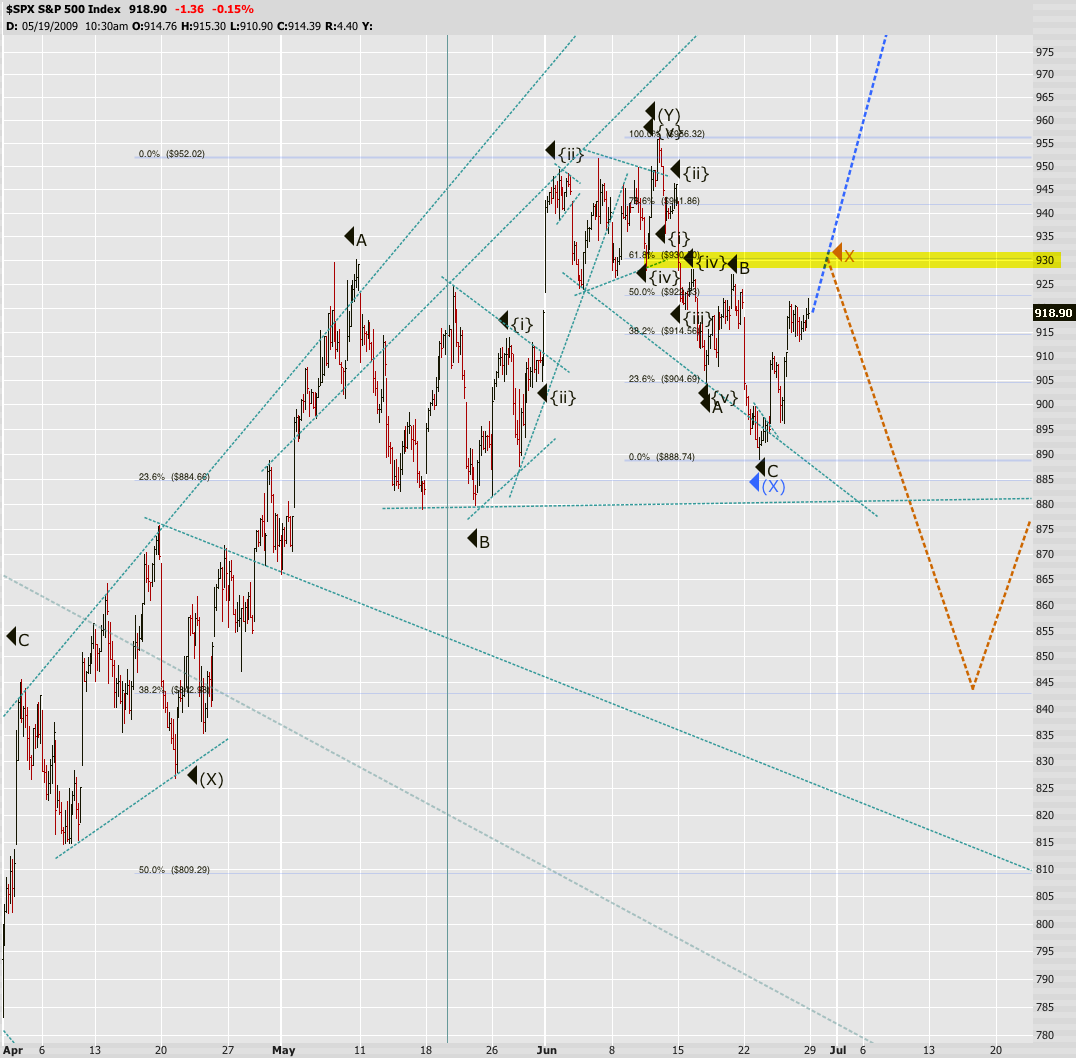 Soylent Blue: We completed Intermediate (X) as Curly’s money printing machine is ready to kick this equities market into overdrive (how I have no idea but what do I know). We should breach through one fib resistance after the other and finally breach the 956 peak. Target is a bit of a riddle right now but 1000 is a probability.

Soylent Orange: The recent rally from the 888 lows was a stop sweeping head fake designed to shake out the hobby bears (ahem…) – we might pop a big higher to complete Minor X of Intermediate (X) before we drop into another zig-zag to the downside. I know that the push up doesn’t look like a clean zig-zag but quite frankly there have been a lot of inter-market divergences in the past days and I’m not going to over-analyze every Minuette degree wave. The bigger picture here supports this scenario, especially in conjunction with the DJI/SPX divergence. 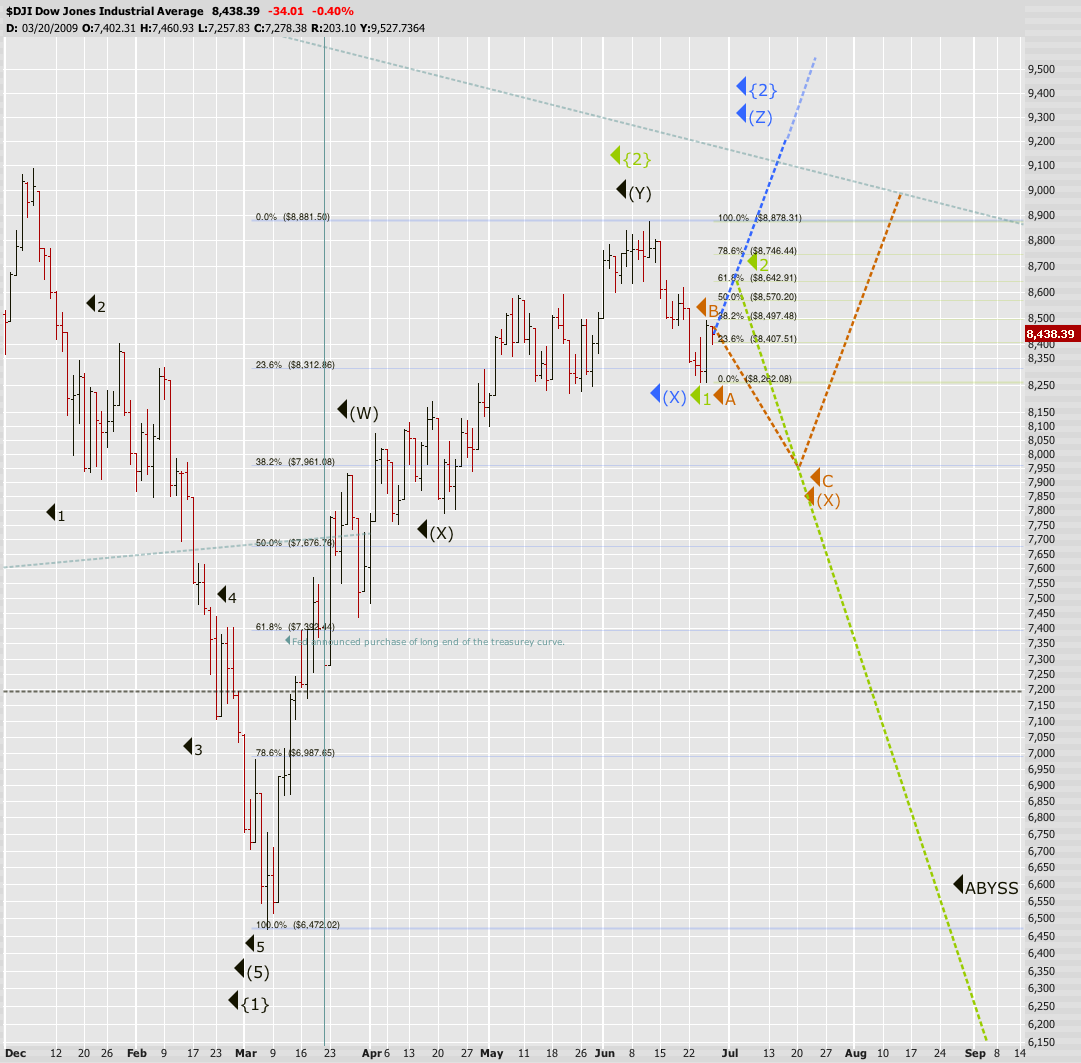 Long term I would also like to bring up a third possible scenario which kind of coincides with Soylent Orange for the next few weeks:

Soylent Green (a.k.a  Rabid Bear Syndrome Scenario): We actually finished Minor 1 of Intermediate (1) of Primary {3} at 8295.43. We either completed Minor 2 on Friday or will do so on Monday/Tuesday. After that we will start rolling over and continue to drop hard, finally breaching this year’s low of 666.79 on the SPX (6,469.95).

So, how will we know once/if we get closer to the 8000 mark (~ 845 on the SPX)? Besides the wave pattern we’ll have to look at breadth numbers and several other market indicators. For the record – I only give this only a roughly 20% probability – but it’s good to keep it in mind.

Okay, one more and then I’m heading to the gym: 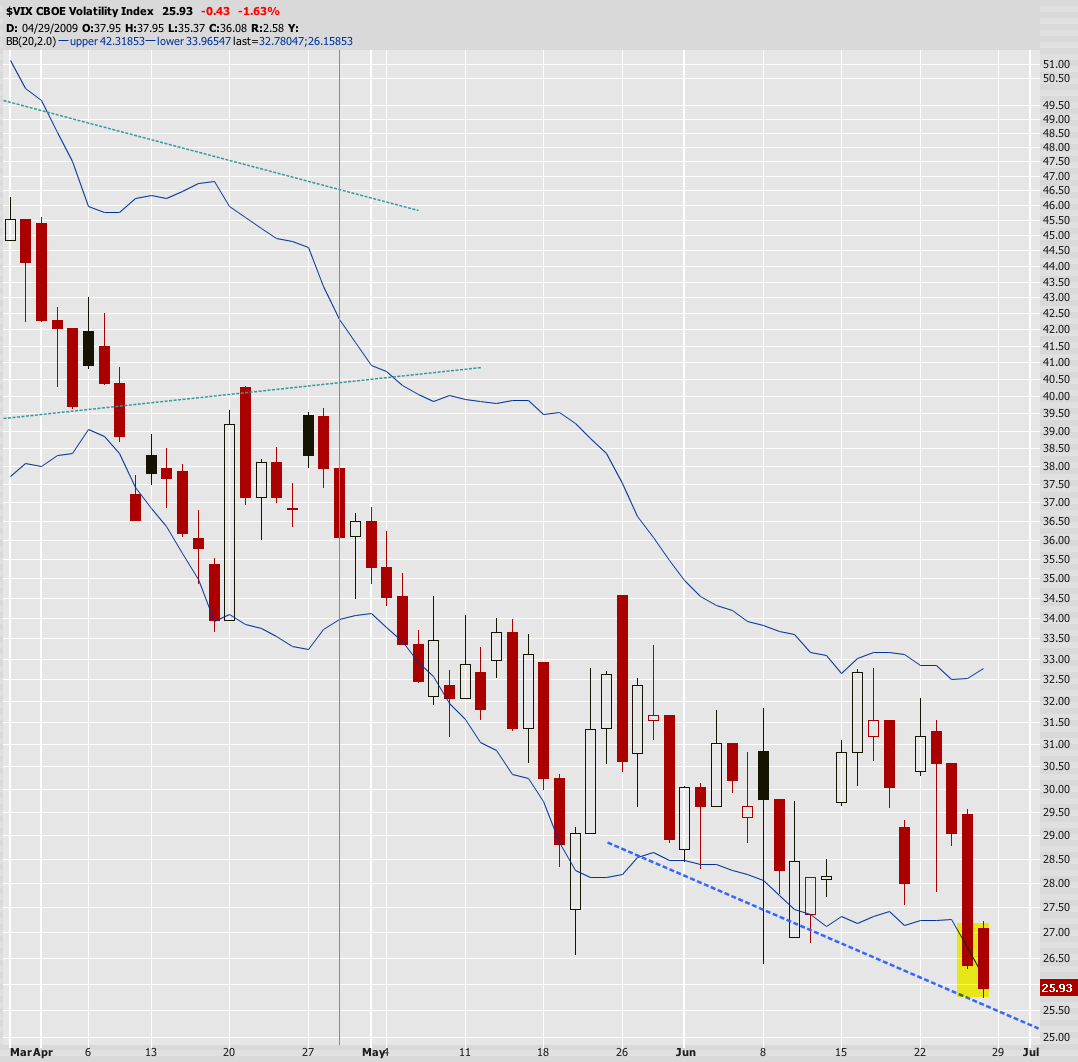 We had not one but two preliminary VIX sell signals (refers to equities btw). Here are the rules again for our noobs:

For a $VIX confirmed signal you need 3 things:

Once you get those 3 things a major reversal usually occurs within the next week. The sell signals are far more accurate than the buy signals.

So, let’s see what happens – if equities drop on Monday or Tuesday we could see a first confirmation here. Which might not be the worst opportunity to once more buy some puts and hope for the best 😉

Alright – I’m out of here for now – might chime in later this evening if I have time for a few more charts.

9:15pm EDT: Eric just sent me updated Geronimo profit graphs (manually collected, so they are based on real entries/exits) – please take a look.