I was pretty frustrated last night as evil.rat/NQ had been through several whipsaws since its official introduction about 10 days ago. Just my luck – after two years of almost continuous upside I have to introduce this thing during a drawdown. But if you know anything about me it’s that I don’t give up easily.

So, I started testing various charting intervals realizing that a 30 minute candle strategy might be hazardous in the current tape – especially on the more low volume NQ. My initial goal was to replicate the same profit graph seen on the 30 min chart with a 15 min chart – and it turned out that this was actually not that hard which really surprised me. However, I kept on on running my optimizer for a few hours – and to make a long story short – here are the results: 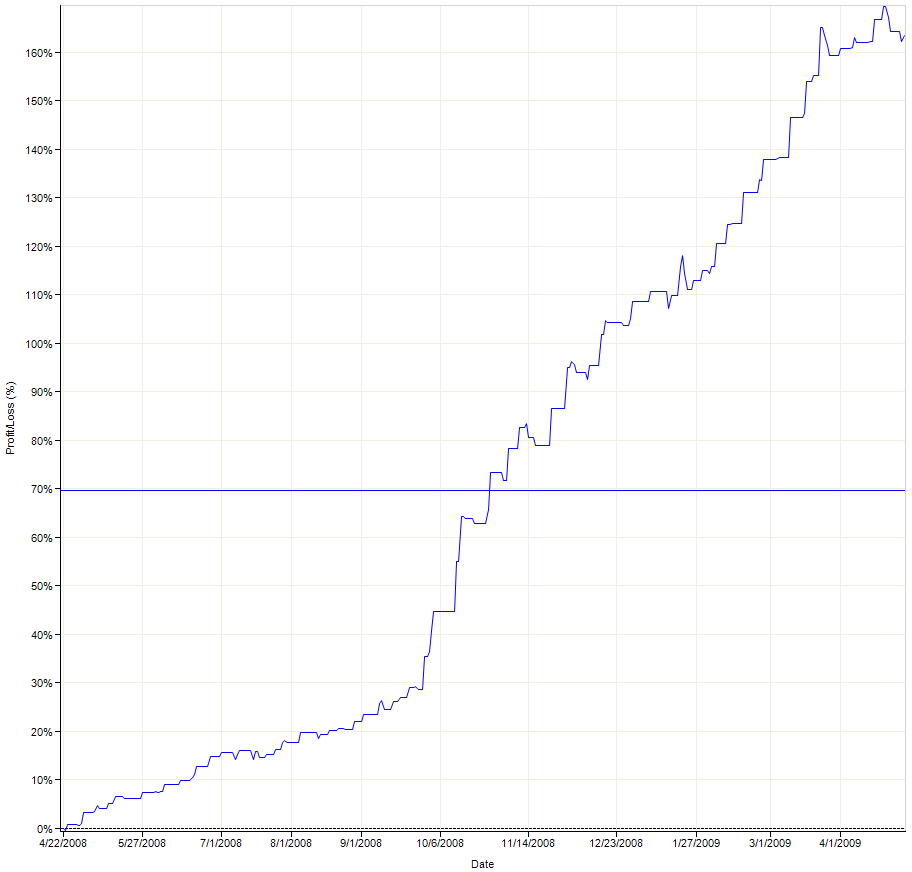 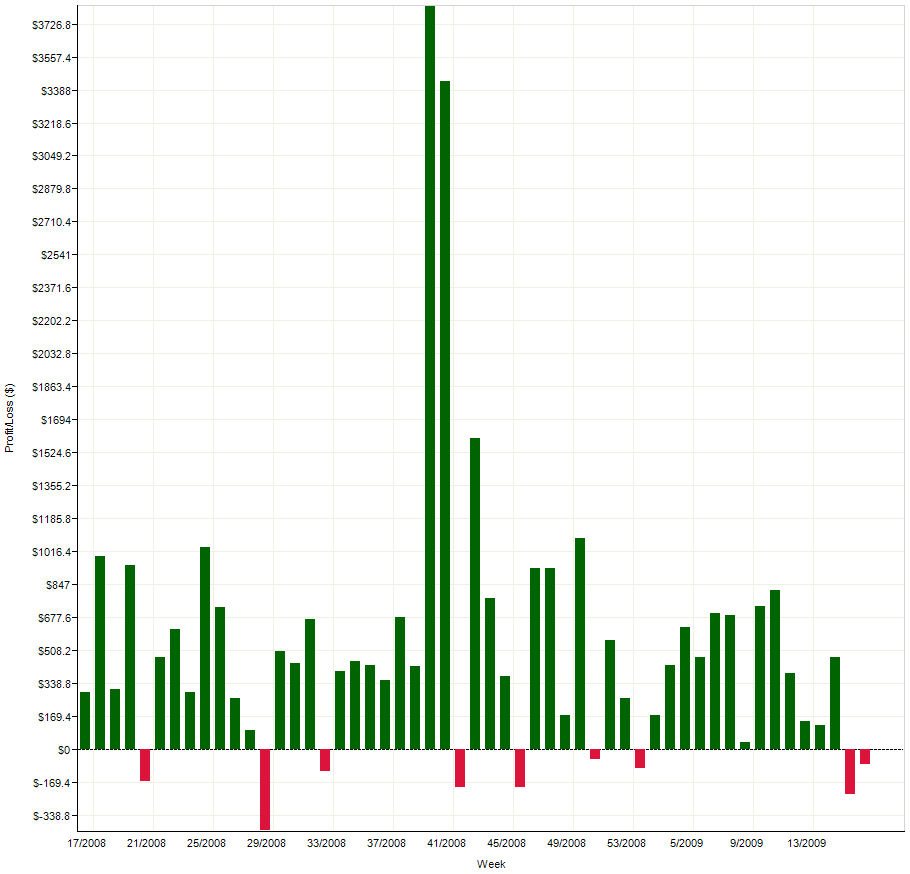 Here’s the weekly profit graph – yes, we are still down for this week but a lot less as there wasn’t as much whipsaw – which was the point of the exercise. The strategy is now more responsive. 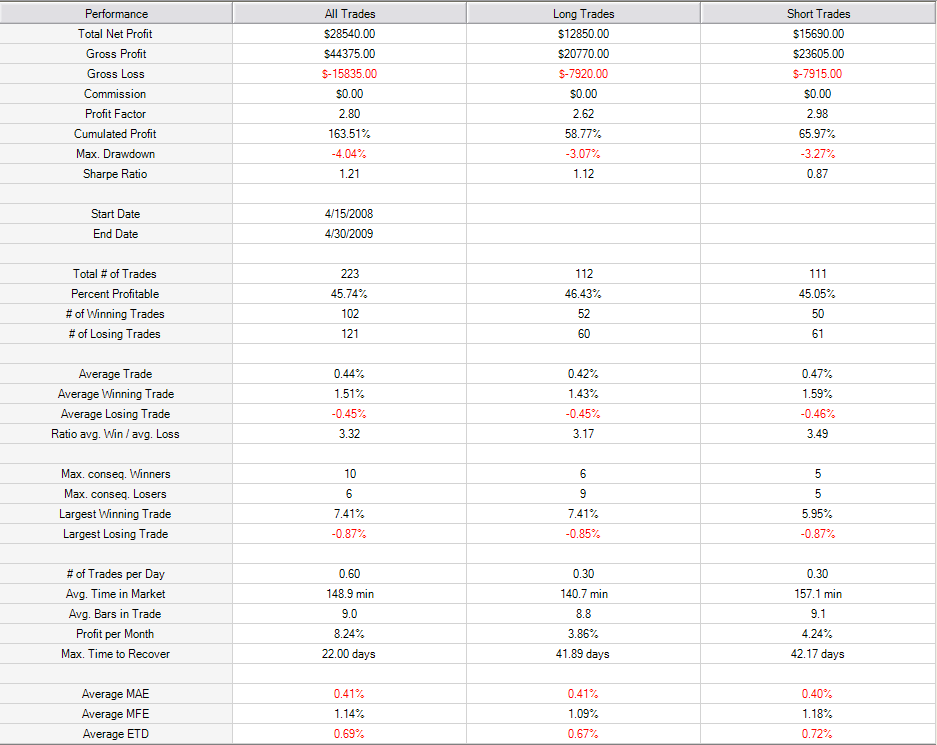 Now the statistics chart is actually the most important one and I’m posting the previous version right below so you can compare the two: 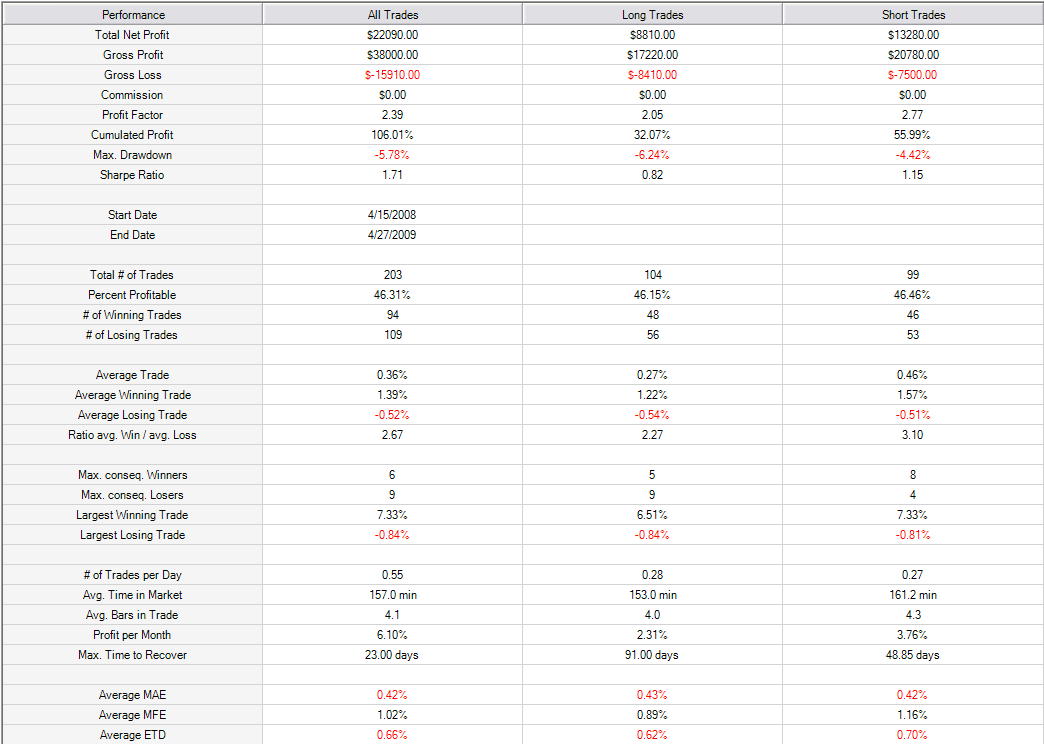 This is the old one – still featured on the evil.rat page.

The key observation here is not just a considerable increase in profits but two statistics which many of you rats might not even look at:

So, we have about 10% more trades, which I think is very tolerable as the chart interval has shifted to half the amount (i.e. 15min vs. 30min previously). However, the max drawdown is actually lower! That is usually not the case when you start decreasing the chart interval – I have tried on many systems. The sweet spot on most strategies I have tested is between 30min and 90min – if you are below 15min you do get higher profits but the drawdowns are usually well above the 10 percentile.

Now, I know what you are thinking:

Q: But Mole – are you going to start fiddling with the system every time we have a drawdown?

A: No – I was actually trying to simply shorten the chart interval but retain the same profit curve to avoid getting caught in whippy tape. I would have not made a change had there been any negative impact on my key parameters, which are profit, drawdown %, and # of trades.

Q: Are you going to do the same for the ES?

A: Well, I have tried but thus far I have not been able to replicate similar results on the S&P E-Mini contract version. I will keep trying but, sticking with my pledge, I need to make sure that a 15 min version of evil.rat/ES neither vastly increases the number of trades nor that it impacts the performance of the existing system. It also seems that evil.rat/ES is a bit more resilient to the pump and dump schemes we’ve experienced lately.

Q: Have you tried a 5min version of evil.rat?

A: Yes, I have and yes it does produce higher profits. But there are at least double the amount of trades and the drawdown suffers considerably (I think it starts in the -8 to -9 percentile). So, that is not an option in my mind – especially not in this tape. I am frankly really surprised that evil.rat/NQ works so well on the 15min chart and it is probably specific only to this particular contract.

So, in a way I should actually be thankful for the bad tape of the last week as I otherwise might not have tested this more exhaustively. My goal was always to employ a shorter term chart interval but my I will continue my research over the weekend (once I’m out of the hospital) but rest assured that I will only change over evil.rat/ES if I find a worthy replacement.

For the record – before you guys all get super critical on me: Remember when I was fiddling with the Zero a few months ago and you guys were moaning and groaning about it? Well, look how far we got it though and it’s vastly better than it was just a few months ago. The subscriber base is growing every month and I think most of you guys are very happy with it. If I see something I cannot pass up I will present my new findings to you – as I have right here.

Right now you guys are actually trading the new version of evil.rat/NQ and so far it’s doing fine it seems. If you have any further questions please post them here.