The first day of November is usually the entry way to an almost procedural positive trading period, at least statistically speaking. Instead it turned out to be the gateway to hell and it’s time to assess the damage and to draw important conclusions. I’m going to make this a freebie as I imagine that all kinds of thoughts and emotions are rattling through your rodent brains right now. Before we get to the charts let me address something fairly important however and of course it relates to trading psychology. When I woke up I was parsing through the comment section and saw this:

Moles recommendation near the close yesterday ” don’t chase here and i would close out any shorts”, the news doesn’t matter, except when it does. This is going much lower the greek referendum is a deal breaker.

Boy, where do I start? First up closing out any short positions after a considerable wash out yesterday was the right thing to do – period – this is sheer greed talking (which is ‘fear’ of losing out). Secondly please explain to me why Greece suddenly ‘matters’ so much after nearly two years of horrible news coming out of Macedonia almost on a daily basis? Third, never ever forget that ‘correlation does not equal causation’. Yes on the surface the fact that D-Pap is calling in a confidence vote and that MF Global is going down the shitter supposedly instils some ‘concerns’ in the minds of investors. Seriously, if you believe that after the past two years then explain to me how the news in the previous weeks did not affect the systematic short squeeze since ES 1068.

Anyway, on to assessing the damage: 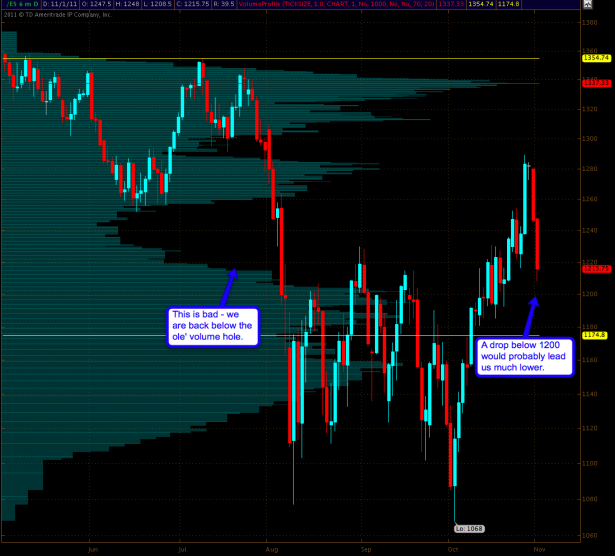 I’m not going to sugar coat it for you guys – this is pretty bad. As you know I did anticipate a ‘short term shakeout’ but this is quite a bit more than I bargained for. We are now back below the ole’ volume hole – not inside it – no we sliced right through and back below. A drop through 1200 would have extremely negative consequences – see below: 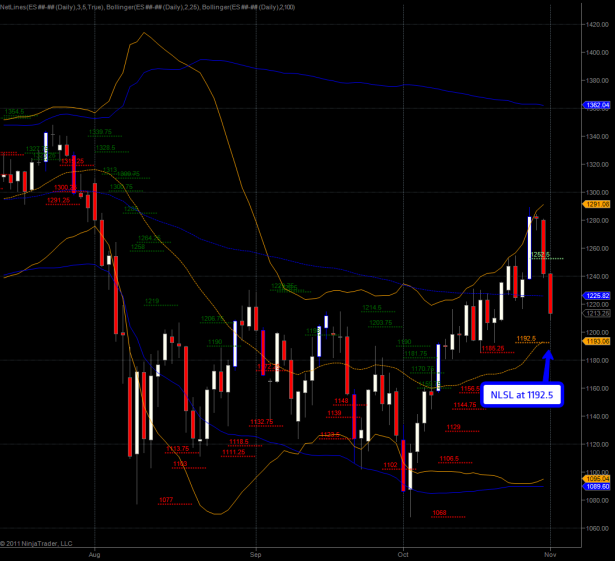 As you can see the daily spoos is showing a NLSL at 1192. So 1200 would be the psychological breach that may get us right down to 1192.5, which coincidentally also represents our 25-day SMA. IF we close below that I see a potential for to us to go all the way to 1100 and that of course completely wipes out any hopes of a positive Santa season. Let’s hope for the longs that won’t happen – of course the bears have now smelled blood and I have an inkling they are going to do their best to pull this thing lower. Thus the remainder of this week is crucial in determining the direction of the medium trend. 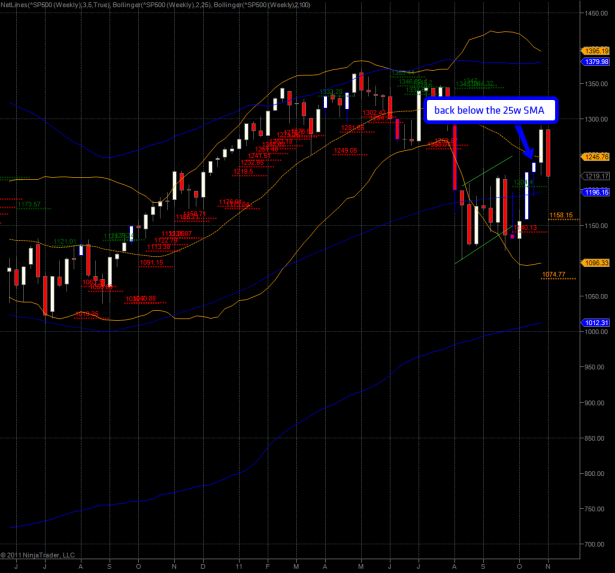 It gets uglier – the weekly SPX is now trading below that 25-w SMA I was so excited about having breached. Unless there is an almost instant push higher today/tomorrow we are talking failed break out. 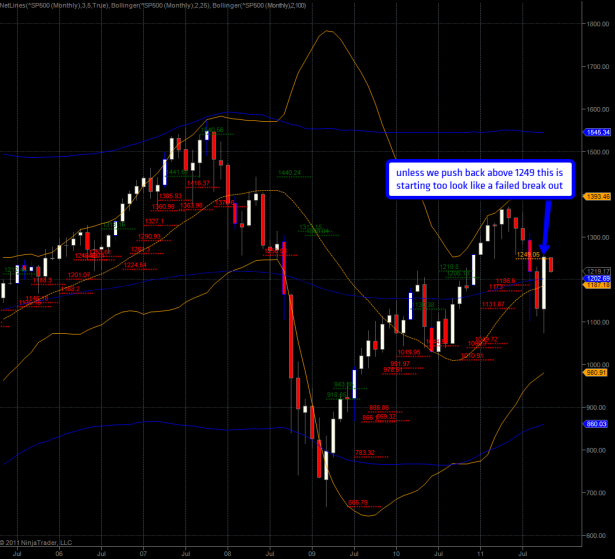 And if you thought that was bad then I recommend you do not look at the chart above. Ooops – too late – sorry. That’s right the monthly SPX is back below that monthly NLSL we first breached in August and retested in October. I think it’s fairly obvious that once we drop below those two SMAs (i.e. 25-m and 100-m) the longs are looking at some tough times ahead. Season, schmeason – this is some ugly tape. 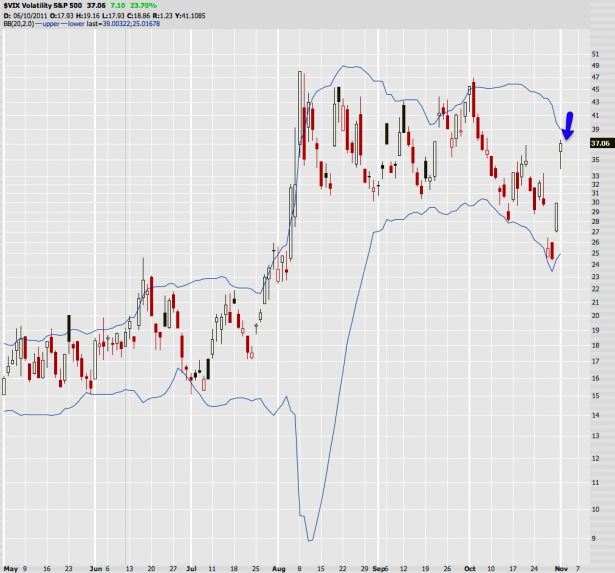 As you can imagine volatility has exploded – unfortunately not enough to anticipate a VIX buy signal (noobs: relative to equities – I am going to put a pertinent section to our cheat sheet). May I say that even in the context of recent IV monkey business this is a major jump up – almost 25% in one day!

UPDATE: Please make sure to check out the previous post in which Volar makes some great (borrowed – ahem) points regarding this spike in volatility. 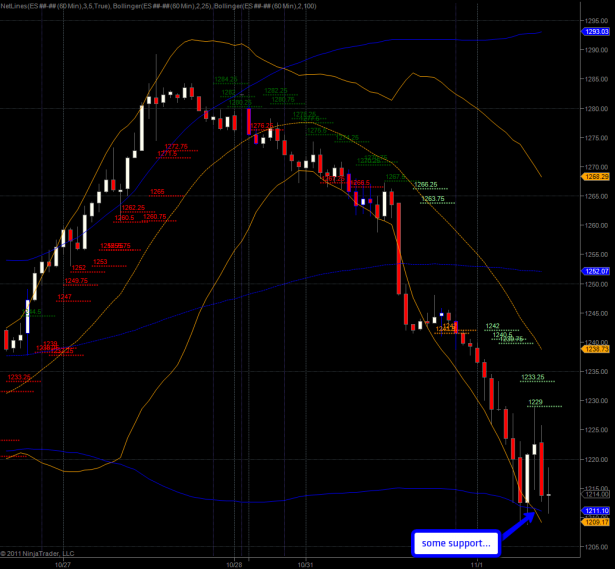 The spoos have climbed to 1215 since I took this snapshot but the next hourly NLBL is still light years away. It seems to me that we are simply stair stepping lower here. Once that lower 100-hour Bollinger gives way (i.e. ~1210) I think all hell may break loose – so keep an eye on that barring any new buy Net-Lines on the horizon (which I will report right away). 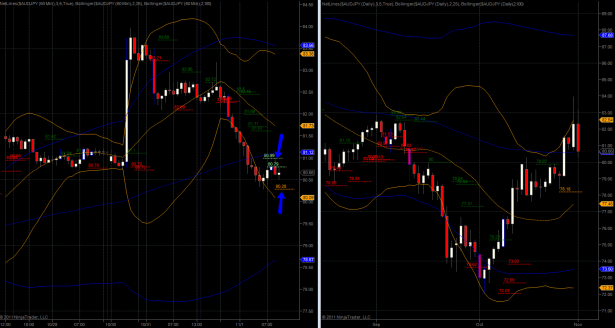 The AUD/JPY (or Yen futures if you have those) are our favorite FX correlation to equities. And of course the picture is similarly dismal – an attempt to breach a cluster of buy Net-Lines failed (thus far) – I would keep an eye on 80.99 and then at 81.12, which is the 100-hour SMA. Nothing on the daily panel to hold on to.

I often talk about context here and how to compare previous fractals with developing current ones. And to see a toilet flush like this in the context of a statistically positive month, on a statistically very positive day is extremely concerning. Perhaps this will turn out to be the bear trap of hell – we are still in technical territory that would allow for that eventuality. But something like this should have happened in mid to late October – for this to happen right here and now is something that gives me great pause. Thus what really matters at this point is follow through – can the bears finally close the deal and take this thing all the way. There is once again a door open for the grizzlies to deliver an unexpected knock out punch Rocky style.

You know he’s all bruised up and bleeding and everyone counted him out and suddenly he rears up and delivers that upper cut that sends his opponent face down on the mats. And I have to hand it to the bears – that was a rope a dope nobody saw coming (no, especially not the perma-bears as they successfully predicted ten of the last two bear markets – sorry, your opinion does not count – correlation does not equal causation). We are now standing at the edge of the cliff and the onus is on the bears to take it lower – similarly what the longs do right here and now will determine the tape for the coming months. Much technical damage has been inflicted and it’s time for a counter push.

I’m going to grab a very late breakfast now and report back if I see anything new. Until we see some real buying interest the short term trend remains down, so trade accordingly. I would however not chase the tape to the downside here, for obvious reasons.

UPDATE: I just realized that I plastered over Volar who has some interesting thoughts regarding the VIX – please make sure to check it out.