It’s been a strange few weeks since the start of the new year. Actually since about late November of last year the tape has been moving in spasmodic gyrations across the board. The exceptions being the Euro/Dollar and crude of course. In response I’m becoming a lot more conservative about picking setups as we’re seeing FU stop sweeps on a daily basis in equities, forex, bonds, and in the futures. I’m not one to complain but at the same time one has to be cognizant of the market environment one is negotiating. And boy, by all measures it has been some tough tape. Excellent territory for swing traders if you enjoy being glued to your workstation for eight hours plus per day. 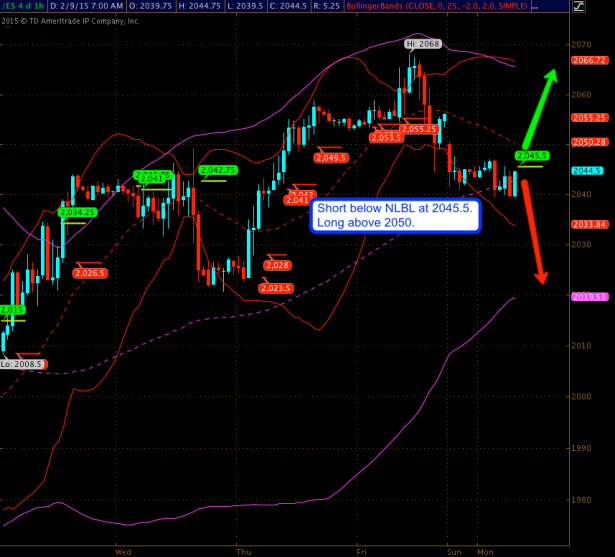 So given that you won’t be surprised that again I didn’t net much on the setup front this morning. But knowing when not to be exposed is equally important as standing ready to wield the iron when the getting is good. Or in other words: Just because you aren’t executing trades doesn’t mean you aren’t trading. And a big part of that is not falling prey to relativism, which is to lower your standards or rules to find setups when there are really none to be had.

Equities actually look most promising this morning and I’m thinking short here with a stop above the hourly NLBL at 2045.5. Flip for long above it and while you’re at it sacrifice a medium rare beef burger to curry favor with the Market Gods, perhaps soothing their wrath and omitting us any further gyrations.

Hey, whatever it takes! After six weeks of living in the woodshed I’m ready to consider more extreme measures if it means that we finally pick a direction here. Any volunteers? Skynard – Mugabe – GoldGerb? Although the latter would be more of a sacrificial snack  😉