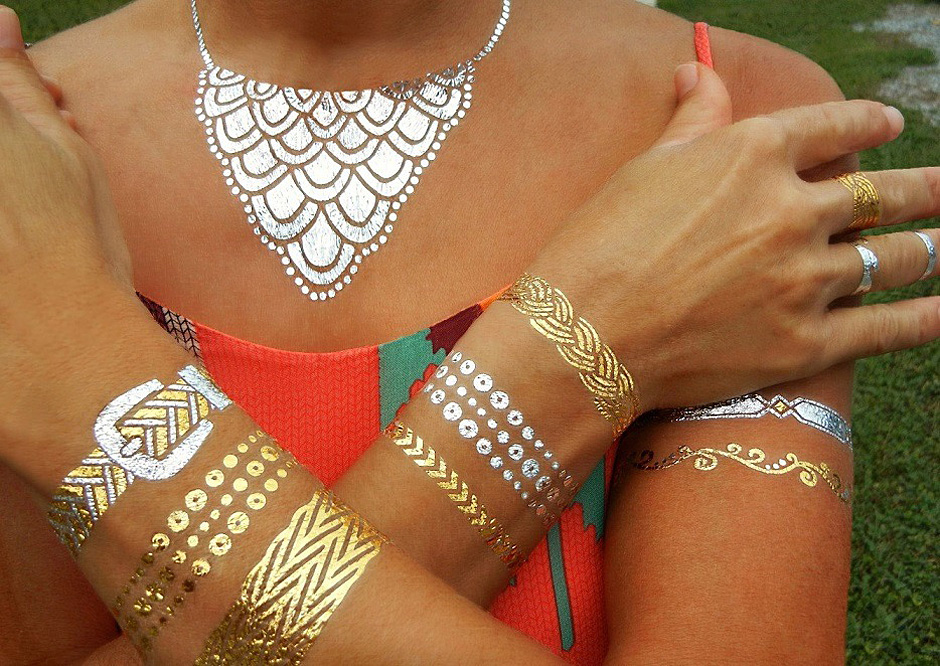 I’m sitting a bit between a gold bullion and a silver plated hard place this morning. Reason being that earlier I was running a few test stats of which the popular exchange traded Spyder fund GLD was a top candidate. And lo and behold – apparently this week is statistically one of the highest ranking in the year, not just for its net Sharpe ratio but also for the percentage of higher closes: 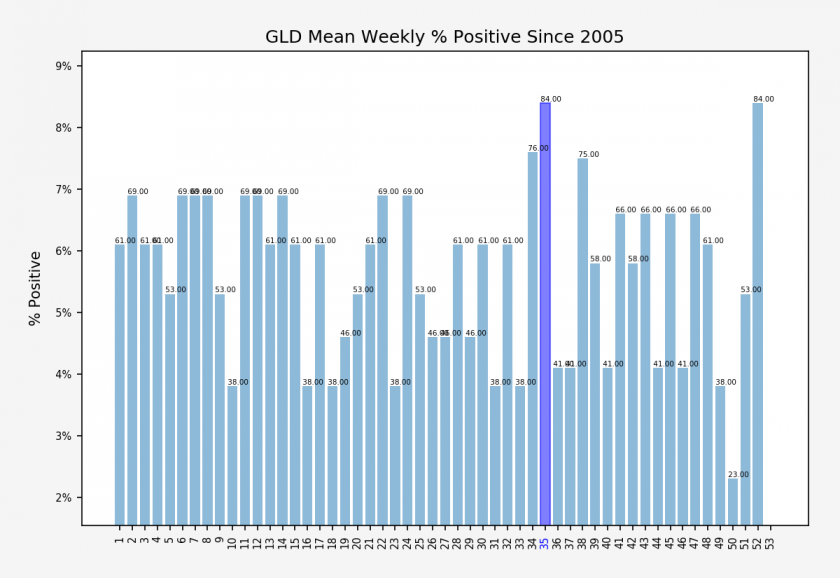 An 84 percent chance that week #35 resolves higher. Heck, I take those odds any day! 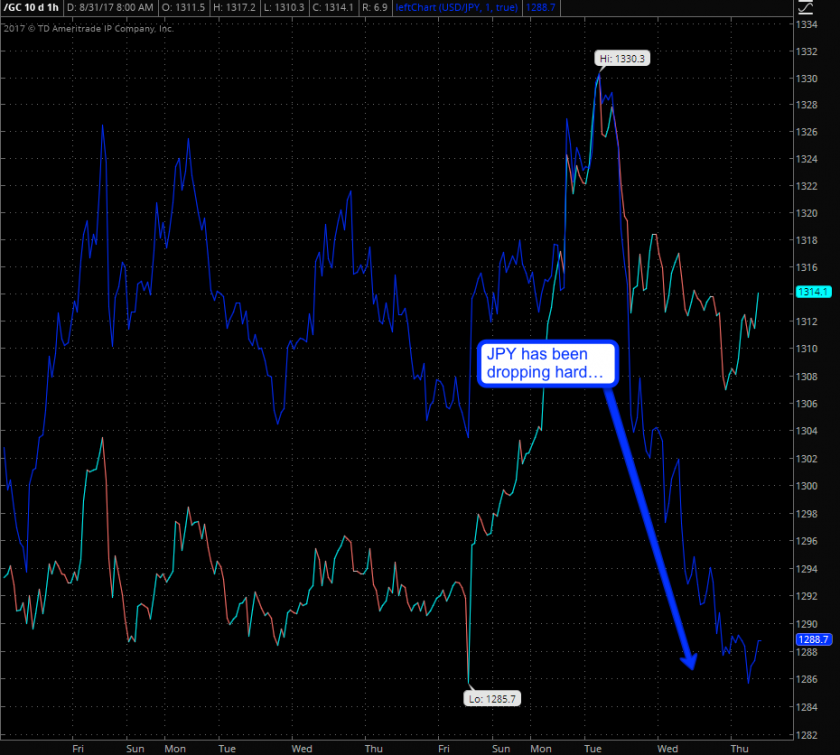 Which may must explain the following divergence: The Yen usually tracks gold pretty well but since Monday gold has been dropping somewhat but continues to lag the Yen by quite some margin. 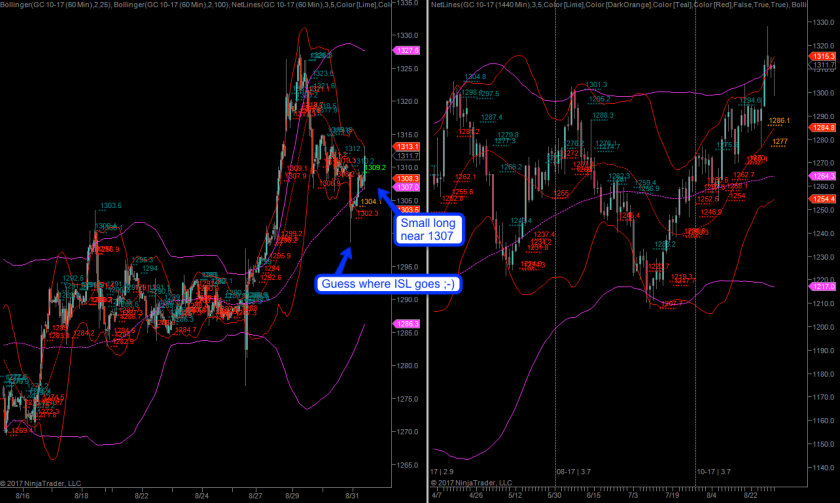 All of which makes this juicy entry a lot more difficult to take. I actually could have grabbed it a few handles lower but hesitated due to the conflicting data I’m looking at. Maybe ignorance is bliss after all? 😉

Remember also that next week has pretty low odds of ending in the plus, thus for this entry to have any chance of succeeding I’d need almost a picture perfect entry which I only would risk for 0.3R if gold drops to below 1307 and then paints another spike low. Oh and I want free voucher for one mulligan on silver. Too much to ask? 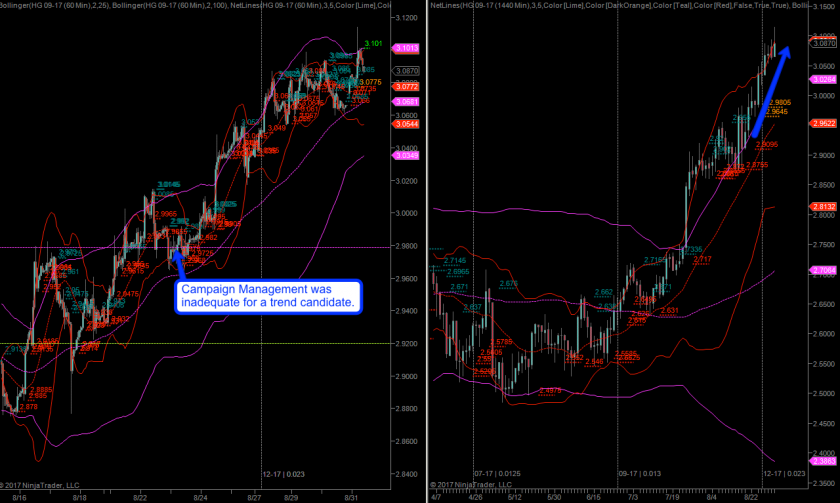 I wanted to revisit a prior copper campaign as I’m seeing a valuable lesson to be learned. Unfortunately it got stopped out at about 1.2R which wasn’t bad but thwarts the profit potential I had anticipated. You may recall that I was pretty excited about this entry as I saw clear signs of a trend candidate. 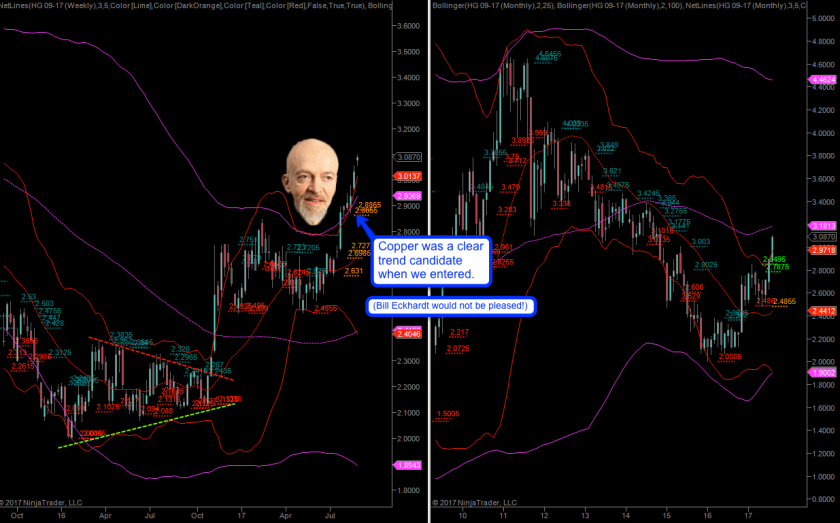 What are those, oh mighty Mole, please tell us! Well, for one it had painted a break out pattern out of a pennant on the weekly panel after which it slipped into sideways mode for a few weeks. As it finally picked up steam and pushed above its upper 100-week Bollinger I exploited temporary weakness for my long entry. Of course the idea was to ride this bus all the way into 3.2 where I have little doubt it will end up before the end of the year.

So what happened? I tell you what happened, my overly stingy whipsaw derived campaign management happened! What I should have kept in mind was the long term potential as there clearly was nothing but air above those weekly Bollingers and a breach of the monthly NLBL was of course the final signal that copper would push toward 3.2. What I ought to have done was to keep my trailing stop a bit more loose until at least 2.5 or perhaps even 3R. This may sound like hindsight reasoning but I do regularly employ different campaign management rules for different types of systems. And of course my discretionary trades should not be an exception. In my defense, I’m only half human so like the rest of you guys I often become biases after enduring weeks of sideways churn.

Bill Eckhardt would not be happy, I can literally see him shaking his head reading this. This is exactly the type of campaign he’d be all over back in the 1980s after which he’d jump into his DeLorean and drive it all the way to the bank.

Lesson learned: Let your winners run, and give your trend trades enough leeway to pick up steam. 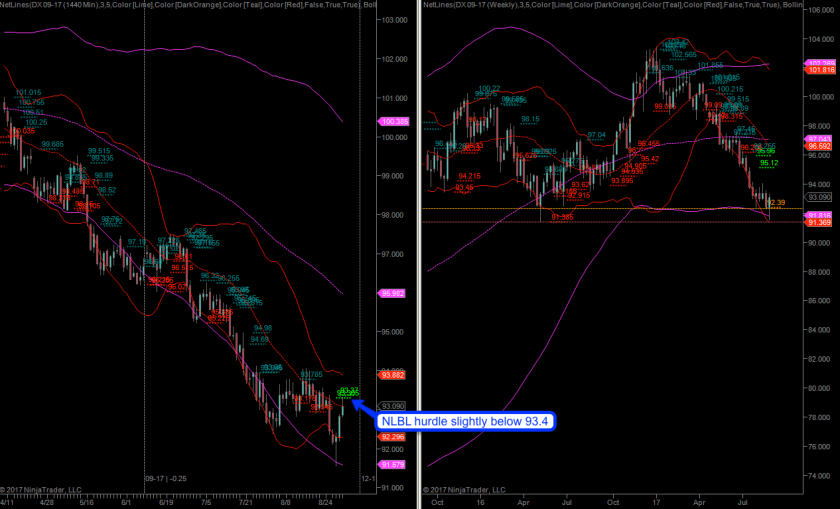 Alright, forgive me if I’m jumping a bit all over the place today but we’ve got several concurrent themes going. The dollar is another chart I wanted you to see, perhaps even in the context of the gold campaign above. As you can see it was rescued from the brink this week but it’s far from being out of the woodshed if you get my meaning. that pair of daily NLBLs below 93.4 will most definitely put up resistance and nothing bullish happens here until those are overcome. A failure here would of course benefit gold tremendously. 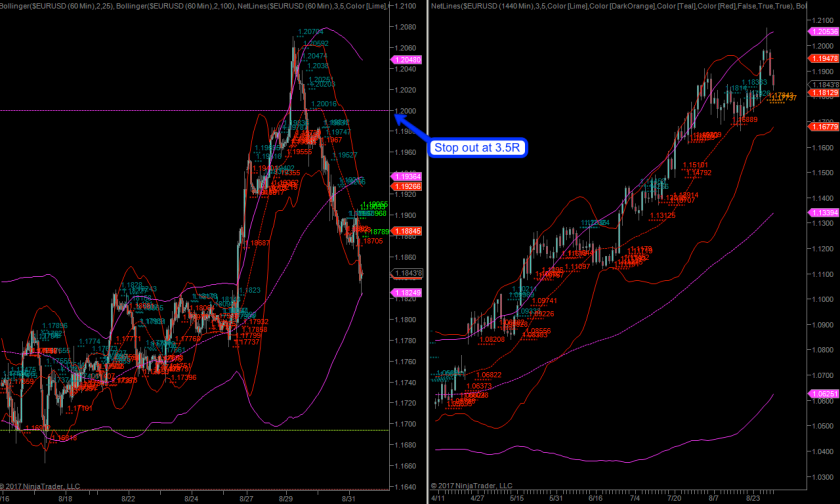 Speaking of which, I’m finally out of my EUR/USD hedge after it scraped 3.5R. Not a bad pay off for a few days of work! Clearly there is the potential for a long campaign here but I decided to hold off until I see a more convincing floor pattern on the short term panel. 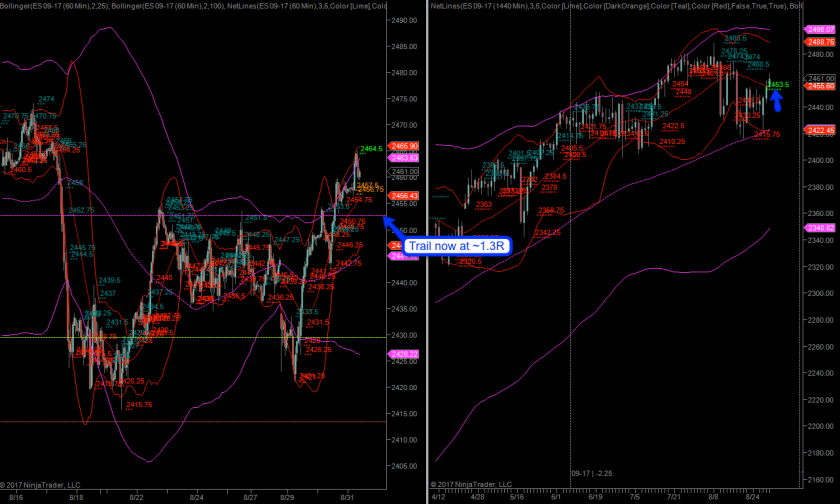 The E-Mini campaign has enjoyed another session of effervescence and now it’s time to advance our trailing stop to a recent spike low which locks in about 1.3R in profit depending on how you placed your stop (and if you did your position sizing properly).