I had to kick that mythical German discipline into overdrive today as I kept tripping over juicy looking but yet immature setups. Practice what you preach they say. If you read yesterday’s post then you recall my thoughts on why premature (discretionary) entries can lead to early stop outs, that they will affect your position sizing, and that they affect you psychologically if you let them. Another perhaps more obvious aspect I didn’t delve into was the fear of missing out, a.k.a. greed’s ugly cousin.

Now if you happen to be married or in a long term relationship then you surely know how the sweet nectar of temptation smells like. As this is a family friendly blog (in an Addams family kind of way) let’s not get hung up on specifics and instead focus on the subconscious risk/reward calculation we constantly are faced with in real life. Your mileage may vary but let’s just agree that some people seem to be better at resisting those forbidden fruit than others. However given the rather brutish realities of U.S. (and European) divorce laws I’d dare to say that some people are simply better at math

Seriously though – in the end it all boils down to a deceptively simple equation and it is one we as traders should be intimately familiar with: Risk versus reward. Sounds pretty straightforward but real life and trading activities share a commonality which is that there are no easy methods for assessing neither risk nor reward.

On the trading front of course we can employ various technical measures to for example assess the probability of mean reversion within a certain price range. Or so we think at least, in reality the faster price descends (or runs up) the higher the probability that it’ll just keep running. So static indicator based measures alone will not suffice especially when it matters the most. I could elaborate on that front but if you have been visiting here on regular basis then I think you’ll get the idea.

Rules Getting In The Way?

No matter how sophisticated and stringent your trading rules, there is always the possibility that you’ll miss an entry and will have to adjust. Perhaps it’ll just run off and never look back. Yeah, that never happens, does it? Now it seems to me personally, your humble host of market domination, that some of the best entries are often crystal clear but at the same time stand in conflict with at least one of my basic entry rules. Soybean oil was a good example I posted yesterday. I looked at that one on Friday and just knew it would take off. But my entry rules did not allow even an early ‘exploratory’ position (how’s that for analytical babble). How do you deal with that? 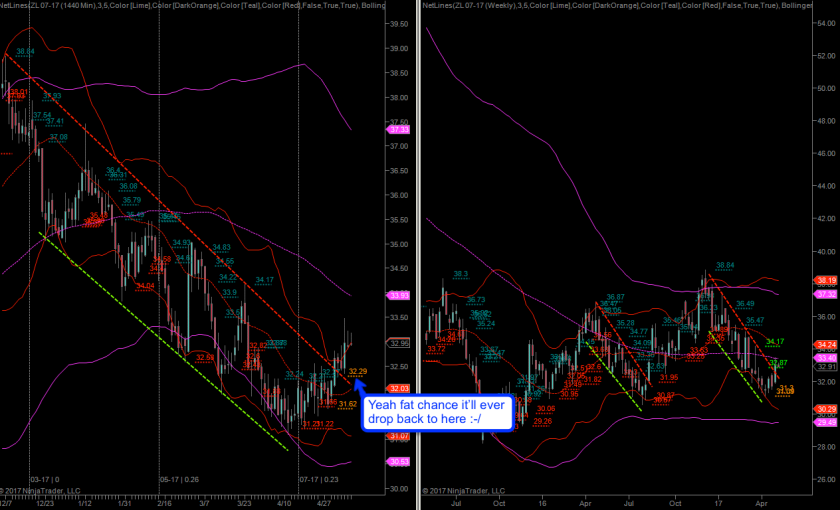 No easy answers there to be honest. The math and the statistics may say one thing but unless you’re running an automatic system geared toward catching trend break outs I’d hazard to say that it’s a personal decision. Because as I suggested yesterday – even the most thought out decision chain can affect you psychologically. Some of you presented excellent arguments in the comment section offering various perspectives on what I posted a few weeks back about scaling into positions. But that only addresses grabbing entries once your (discretionary) system rules have been satisfied. They do not address situations like this one where you, for some reason or the other, have extremely high confidence that a break out pattern is in play while your system rules do not yet permit entry.

Stick With What You Know

Having come to that fork in the road many many times over in my trading career I settled into sticking with my comfort zone, which is ruled by immutable entry rules and campaign logic. Which resulted in having lost out on quite a lot of ‘easy plays’ in my time but I am also proud to say that I avoided a lot of nasty traps this way. 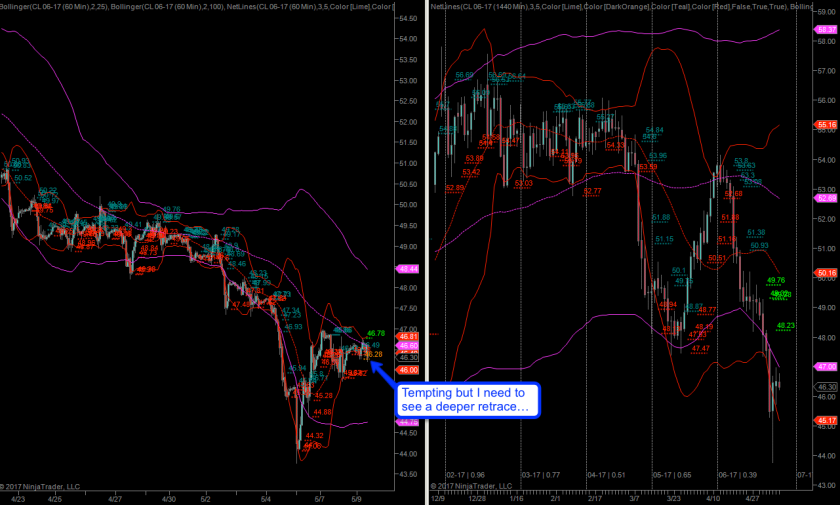 Apologies for the long introduction, now let’s talk about them’ temptations. I think you would agree that crude looks like a bona fide floor pattern at this point. But that spike in volatility near the lows makes me very very suspicious and let’s just say that this is not my first dance with CL. Although tempting I’ll have to just wait and see a bit longer here. A drop toward 45 may give me incentive to think about a long position. 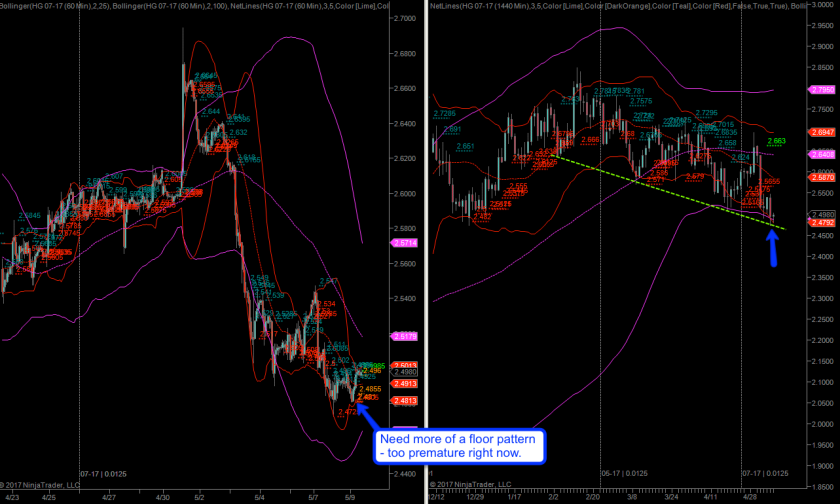 The sell off in copper has slowed down a lot but still seems incomplete. The daily panel shows us a support line which is barely technically mature. The daily 100-day Bollinger is on the tipping point and may just lead us lower into a more extended sell off. So no cookies here either until I see something I can stick a fork into. 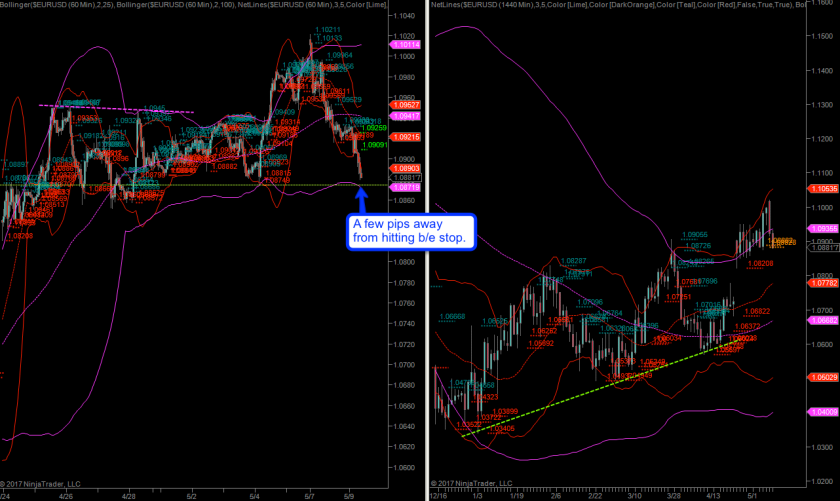 The EUR/USD campaign is reaching its ignominious end. It has neither been fun nor profitable but at least we’re getting out at break/even. Should have bought bloody bitcoin. Actually I’m still holding a few in some account, if I could just remember that damn password. 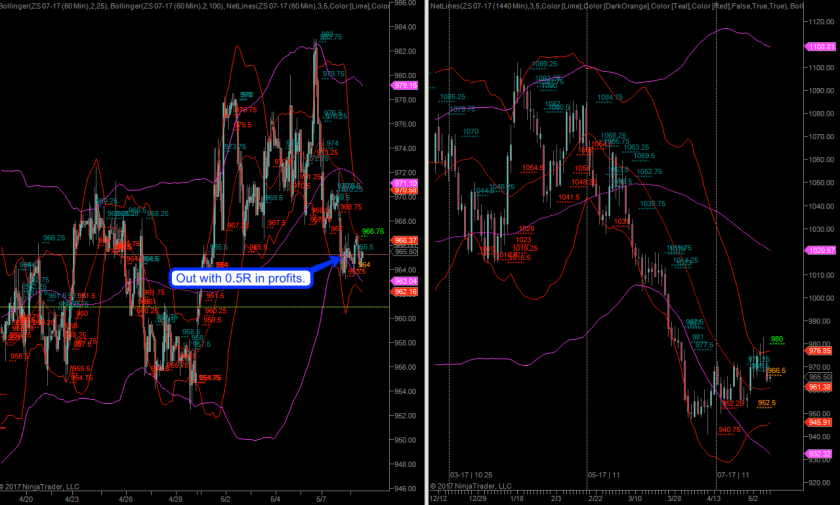 Soybeans got taken to the cleaners again overnight and I’m out now with a meager 0.5R profit. Better than nothing but hardly worth all the excitement.