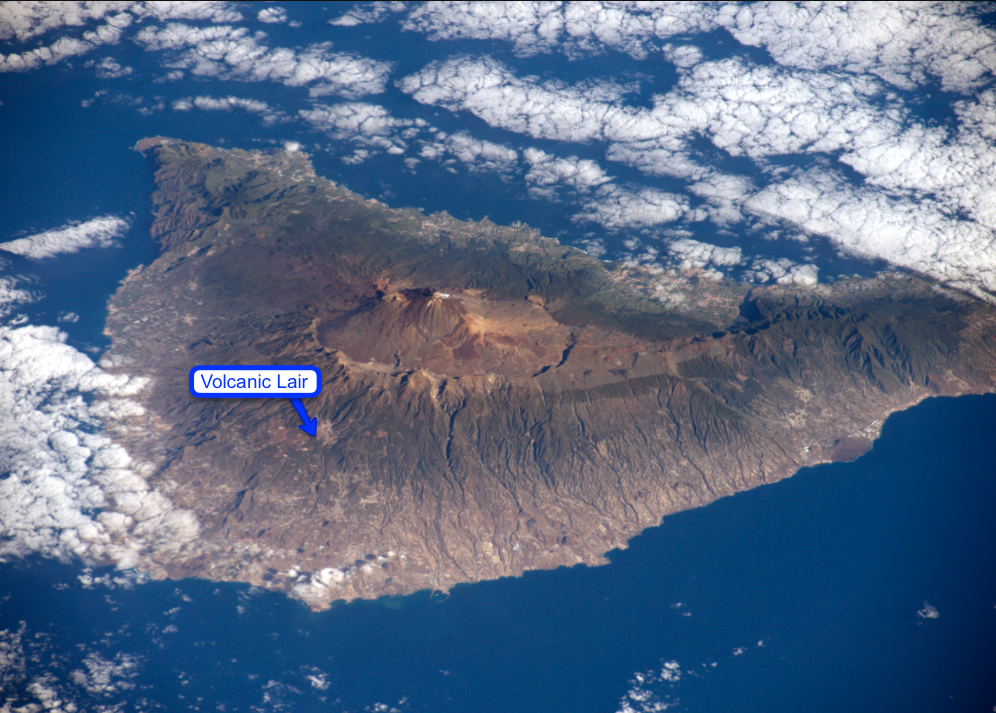 After an extremely profitable first quarter I think most of you would agree that I have more than earned myself a little vacation. And boy do I need one as I have been feeling myself running on depleting reserves over the past few weeks. Yes, even the Mole is only human (sort of). Also, beyond the polished facade and daily evil deeds there had been a lot happening behind the scenes, some of which I have no doubt Scott will be talking about as he’ll be filling in during my two week absence. And may I just say – are you in for a rare treat ladies and leeches!

Over the past two years Scott has receded a bit into the background regarding his presence on the blog and in the comment sections. But just because he has been out of sight doesn’t mean he hasn’t been working his butt off to remain on top of his game. Which is why I am very excited that he’s volunteered to keep you guys entertained while I am resting those old bones and hopefully have a chance to recharge my batteries. What he has planned for you will be a mixture of three categories:

The last category will undoubtedly be the most exciting for the ones among you who have been struggling to not only develop and build a trading system but failed to actually stick with it over time. And you would not be alone. Scott and I have been through the motions many times over and in the course of the past five years we have learned many valuable lessons, most of them the hard way. Clearly there will be some older material that will need to be dusted off in order to refresh your memories and get the noobs up to speed. But as always you can expect a ton of new system related topics, so keep your pencil sharpened and take full opportunity of Scott’s time while he’s here.

Now make no mistake: This is your opportunity to go through a two week trading crash course that some people literally charge thousands of Dollars for. And we do it for chump change that you’ll probably find underneath your couch cushions. Which reminds me that this may be a great opportunity to once and for all abandon your leech status and join our little club. May I suggest a Gold or Zero membership? The latter is preferred if you are trading the E-Mini on a regular basis. Yes, there will be subscriber content as well, so you subs will be getting your money worth, as always.

The systems as well as the Zero will continue running as usual. If you have any issues don’t hesitate to email me, but bear in mind that it may take me a day to get back to you. Also I have no idea how good/bad Internet access will be there and my capabilities will be limited.

There will be no twitter alerts and no email notifications while I’m gone. So you’ll have to simply check the site if there’s a new post. I trust that this isn’t too much to ask. If Murphy’s Law strikes as it often does then fixing the problem may take a little longer than usual. Scott has my number, so if anything super urgent happens or the site melts down then I’m sure he’ll let me know asap. 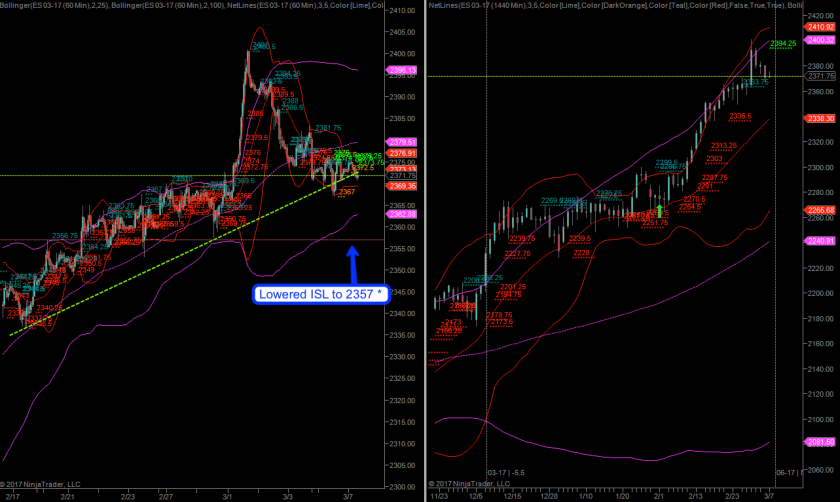 Alright now, the E-Mini hasn’t been doing much and I was considering to pull it ahead of my trip. However after some consideration I have decided to keep it in the running but to move my stop to < 2357. The little asterisk is a reminder to mention that I also had to reduce my position size by about 30%. Why is that? Because a larger stop automatically exposes me to more risk as my open contracts now will accrue more loss when reaching the new ISL. So a wider stop means a smaller position size. If that confuses you then I strongly suggest that you play around a little with our handy futures risk calculator. 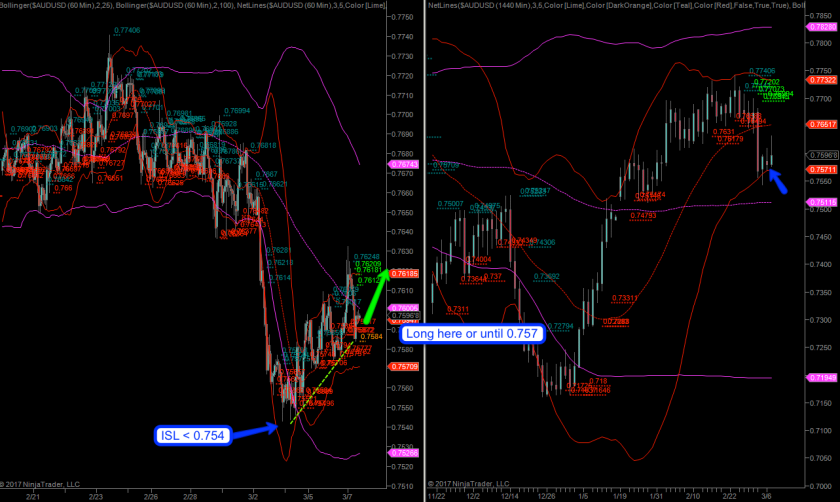 The AUD/USD is a long position here with a stop below 0.754. I very much like the outlook on the daily panel and if that spike low and the still rising 25-day BB are breached then it’ll probably head much lower and perhaps even dip below the 100-day SMA near 0.75.

And that’s it for me for now. I’ll be checking in regularly during my absence and may actually be posting on the 13th and 14th as Scott himself will be traveling during those days. In between you are without doubt in very capable hands and I hope you will enjoy the little change of pace. I’ll let you know once I’m safely settled at my new volcano base off the East Coast of Africa. You are invited to drop by as I am still looking for willing test subject for my new industrial laser cutter.