Exactly one year ago yesterday Volar posted a his presidential election chart. Although he’s been sorely absent in recent months his chart (among other things) has served us very well: 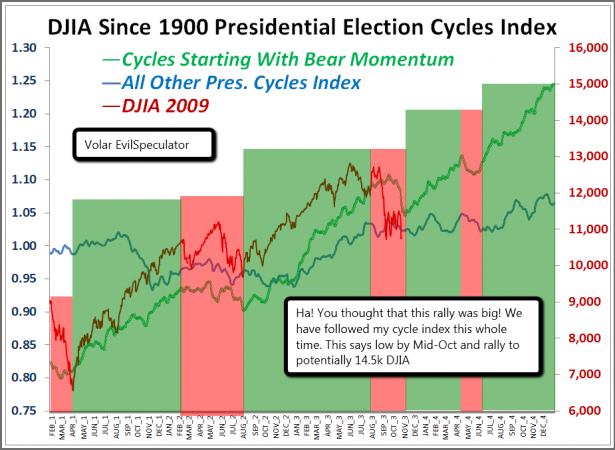 I have asked him for an updated version and he graciously donated the whole McCoy: 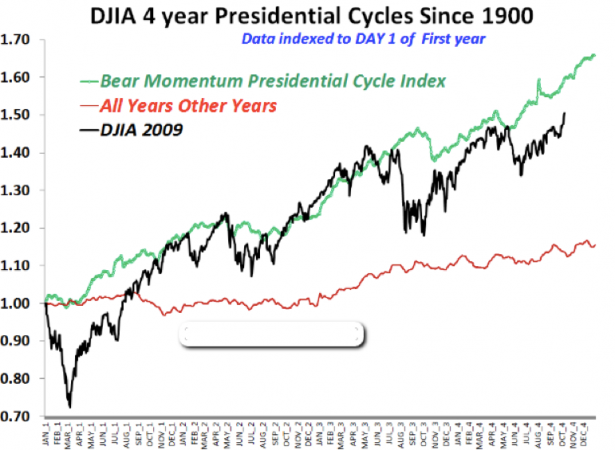 In the past year this chart continued to be eerily accurate – including the correction between April through June I may add – albeit a little delayed. Here’s Volar’s comment:

It still appears to be working and (1) looks like we will enter the next cycle with (A) obama/look at intrade and (B) with a bull momo cycle. I believe that is not very bullish for next summer- actually bearish IMO. 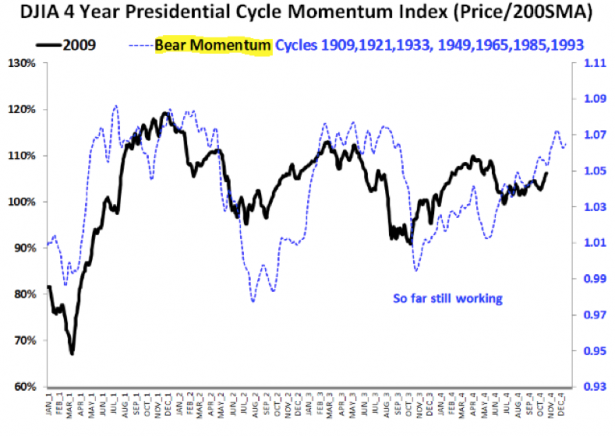 Here’s a new one – the cycle momentum index. Basically its a ratio between price and the 200-day SMA. The reason this works is because we may deviate in price intensity but relative to the 200-day we maintain relative momentum. 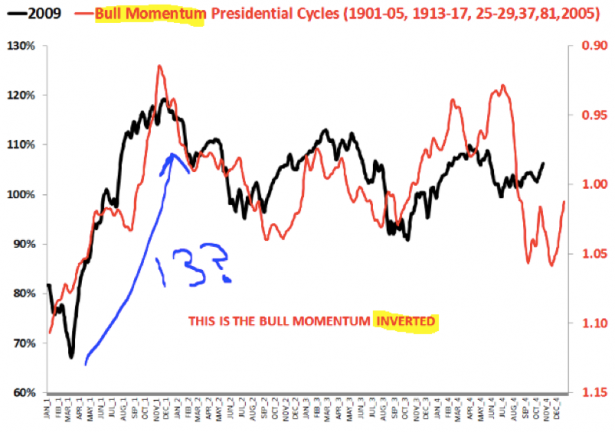 Now THIS is absolutely fascinating. The ole’ number cruncher flipped the *bull momentum* cycle years vertically and it’s a match! That is truly evil – could trading LT swings truly be this easy? 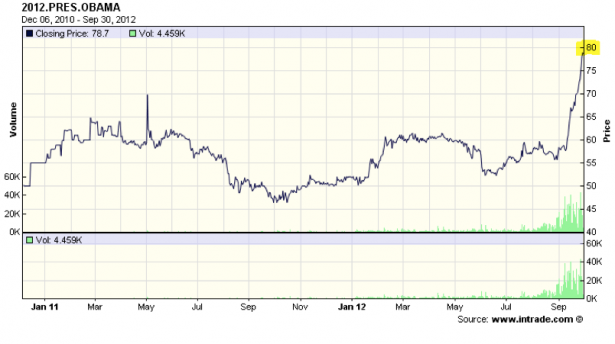 Traditionally a rising stock market greatly benefits an incumbent president. Given the latest Intrade readings Obama is almost guaranteed to get his second term. I’m not having an opinion here as I despise both candidates equally (for different reasons) – however this almost assures that Bernanke will continue to helm the Fed, thus pumping asset prices higher. 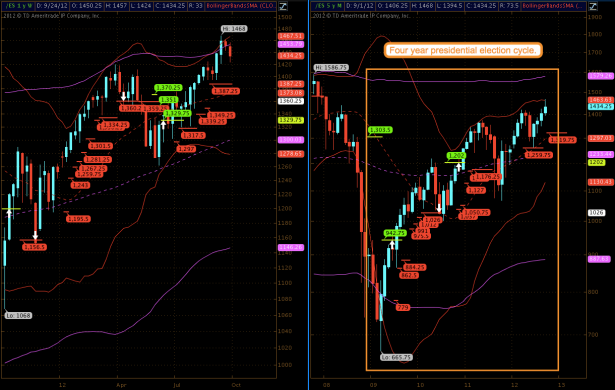 Here’s our long term E-Mini chart – the orange square highlights the 2009 election cycle. It’s rather poignant to ponder about how many bears have been wiped out betting on a 2008 style crash throughout this entire cycle. I remember many who used to valiantly plaster bearish charts in the comment section. Where are they now? Well, hard to say but suffice to say we haven’t seen them in a long long time. 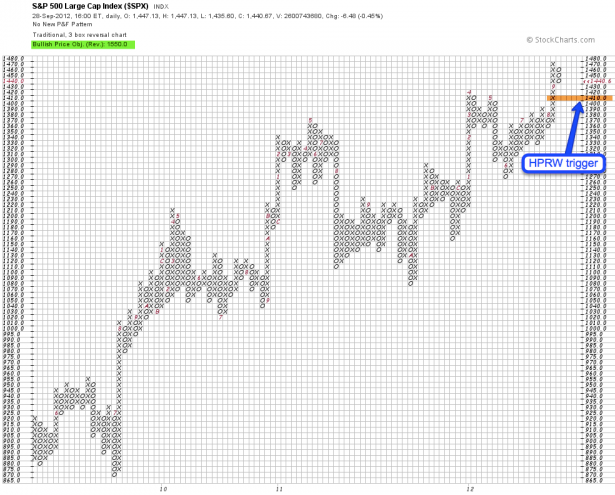 Obviously Volar’s chart suggests a continuation of the ramp well into December and my point & figure chart apparently agrees. Unless we drop into 1400 (which would trigger a High Pole Reversal Warning) the bullish case remains well on its way, most likely assuring Obama a solid win in November (like it or not). 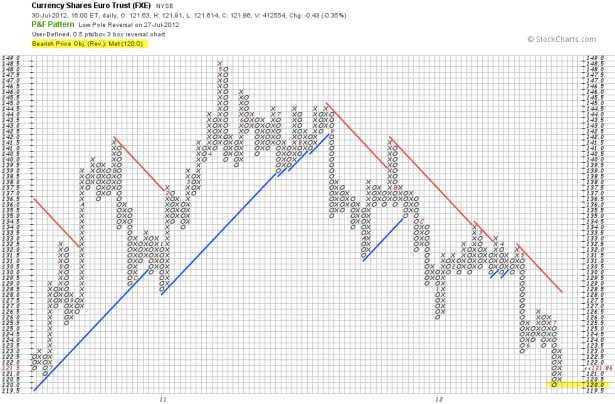 While we’re on the topic of P&F charts – here’s the FXE as we were making lows at the end of July. As you can see it nailed its bearish PO of 120 and then bounced back up. 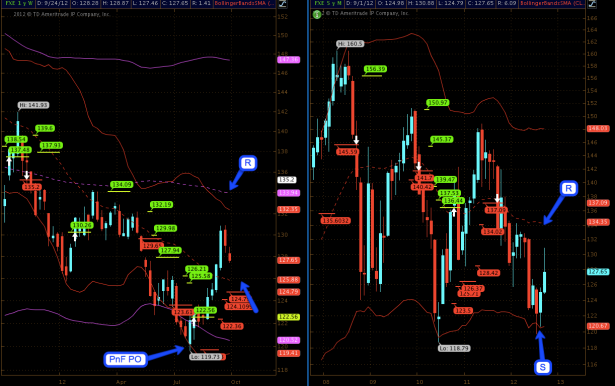 Here’s what happened since – whoever didn’t close out near the bottom got squeezed into submission, and it wasn’t pretty. Astute readers may also have noticed that the bearish PO lined up very nicely with our weekly and monthly Bollinger bands. Which is why we keep using them – when price and momentum correlate we often get to bank some mighty coin. 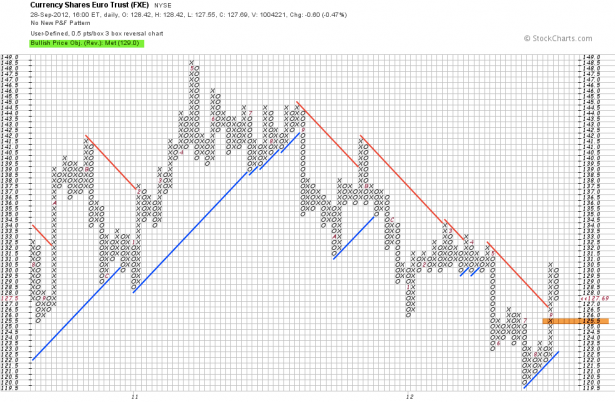 In case you were wondering – here’s the updated P&F on the FXE. As you can see we once again met our price objective and are currently on a little retrace. Unfortunately we haven’t really felt it on the Dollar side as it’s losing its purchasing power quicker than the Euro – talking about a race to the bottom…

Quite a bit more lurking below – please step into my lair:
[amprotect=nonmember] More charts and non-biased commentary below for anyone donning a secret decoder ring. If you are interested in becoming a Gold member then don’t waste time and sign up here. And if you are a Zero or Geronimo subscriber it includes access to all Gold posts, so you actually get double the bang for your buck.
[/amprotect] [amprotect=1,13,9,12,5] 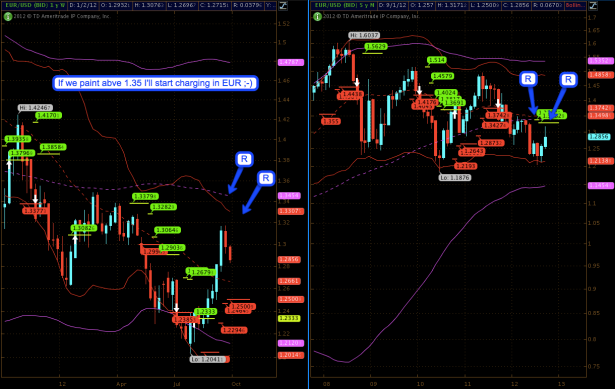 Our EUR/USD LT chart shows us midway to where I think some heavy resistance will start kicking in. If I was to guess I’d reckon that we probably find ourselves toward the end of the year, after the election. Perhaps we’ll even see a bit of a correction then – after that it’s lather rinse and repeat as we’re embarking on a new four year cycle. If we see a big sell off after SPX 1550 then we may just find ourselves at a new LT buying opportunity a few months later. But let’s not get ahead of ourselves. 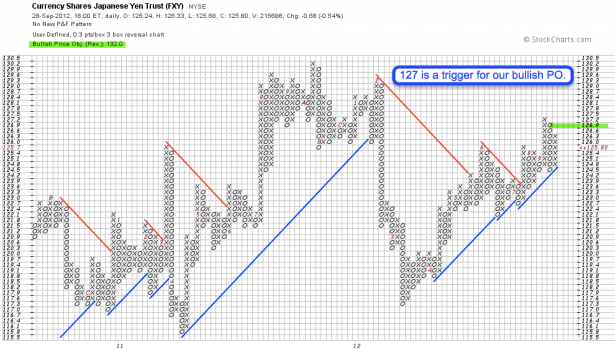 The Yen however has been finding support and it’s just a matter of trime when the BOJ will be decide to actively intervene again. Technically speaking our bullish PO is 132 but I would be taking profits way in advance – probably near the 128 mark. 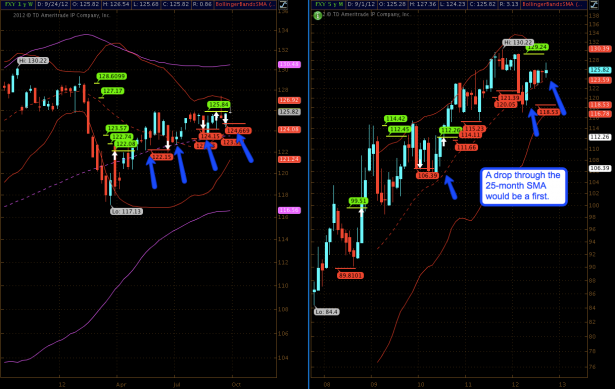 The LT chart shows us ample support at the 100-week SMA and in particular the 25-month SMA which we never breached since 2007. Now let’s think ahead a little (it’s useful in trading as well as in chess) – what will happen a few months from now when we once again reach the BOJ pain threshold near 130? If we once more see concerted action to suppress the Yen then we may just drop below that five year support line, perhaps even leading to a more pronounced sell off. And if the SMA holds then we could see a short squeeze of biblical proportions. We’re talking Sodom and Gomorrah – Godzilla descending on downtown Tokyo, cats mating with dogs- basically New York City on a good day. As you can imagine this is one of the trades I am very much looking forward to in 2013. 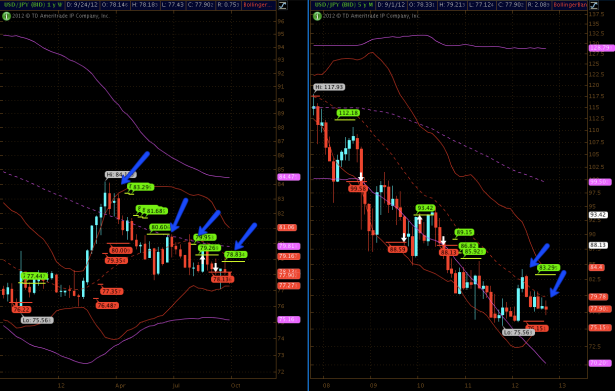 Here’s the USD/JPY to round up the picture on the Yen side. Obviously it’s not been kind to ole’ bucky and we see well tested weekly as well as monthly resistance. Obviously a breach of either may kick the greenback into overdrive but who are we kidding… 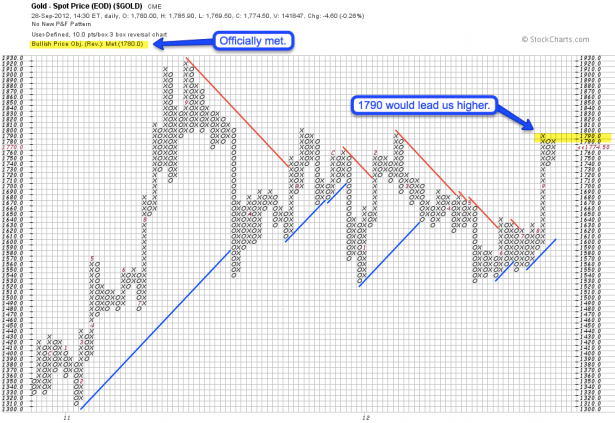 Gold – I think we may be close to seeing a new bullish PO here – in order for that happen we obviously need to see a bullish P&F break out and I think 1790 would propel us much higher. 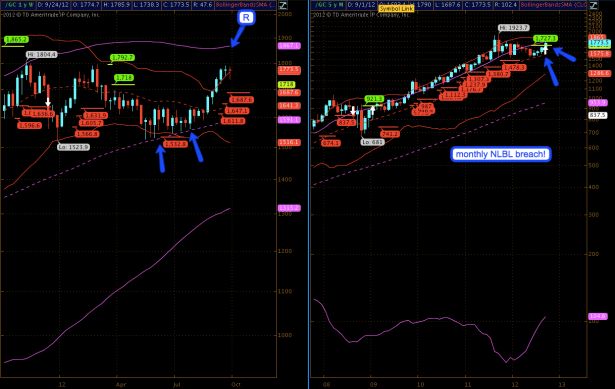 Rather positive is the well established support on our LT charts – the weekly has been our gift that kept on giving. The monthly just triggered a NLBL buy on Friday – wohoo! So let’s keep an eye on 1790 in the coming weeks – it must may us to 1900 or higher. 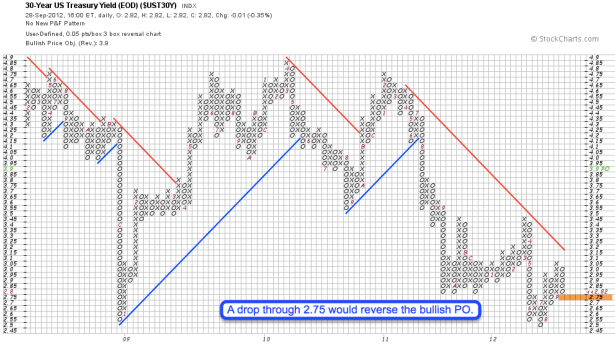 On the long term treasury front things are looking mixed. Officially we are looking at a pretty optimistic bullish price objective here, which a drop through 2.75 would disqualify. As we are close to that mark I am definitely going to keep an eye on that next week. 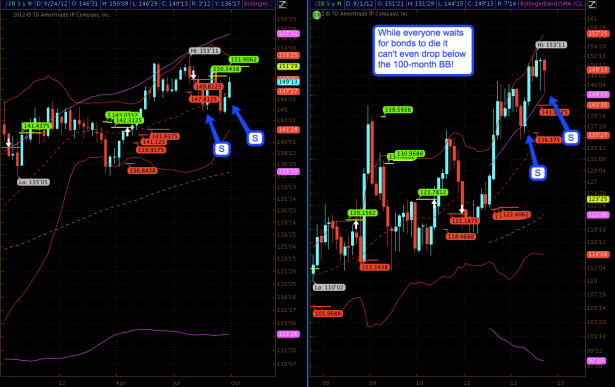 ZB futures obviously run inverse to the yields and I’m seeing quite a bit of tested LT support here, indicating that the bullish PO on the yield side may have low odds of becoming reality. However, when in doubt – just stay away . That’s been my policy as I’m not in the gambling business. Of course if we get a bearish PO on the yields next week then I’d be all over this one, so stay tuned.

Crude – always a consideration as we are approaching the Christmas season. Curiously we’re still seeing a bearish PO despite the fact that gasoline futures have been ramping up hard. 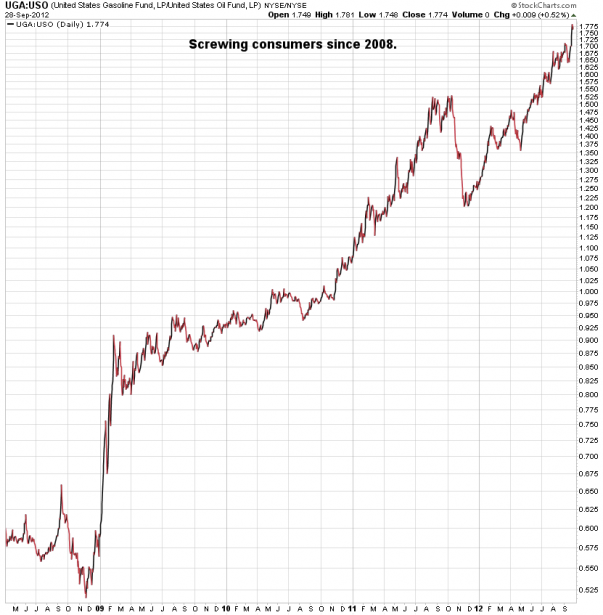 Here’s a LT view of the UGA:USO ratio – unfortunately UGA has only 1% of the trading volume in USO, which is why I don’t touch it. Think about this chart next time you fill up your SUV. Or while driving and listening to the news as you invariably hear lengthy report on ‘tensions in the Middle East’ again. Looks like someone is benefitting from all this but I digress. 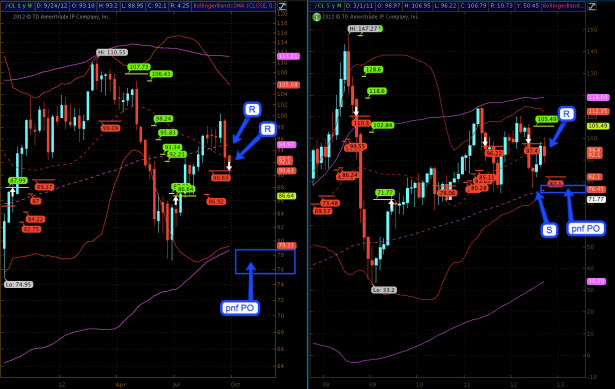 Tinfoil hat theories notwithstanding crude is showing us at a LT inflection point. With September in the bag we are now trading below both weekly and monthly resistance. I have highlighted our current P&F price objective which both correlate nicely. According to the P&F our trigger point on crude is 88 – if we breach that then I think we have pretty good odds of reaching 77. If we breach 95 then we’ll signal a Low Pole Reversal Warning (LPRW) and that would a first strike against the bearish case.