Looks like this move caught a lot of folks by surprise as I don’t see the bears doing their occasional victory dance either. Not that they wouldn’t deserve one after all those years of pain. Which goes to show that high volatility tape without technical context can be detrimental to your account. It also shows that moves to the downside can be quite a bit faster than those to the upside. However if they move fast they usually flame out equally quickly. So let’s see where we are: 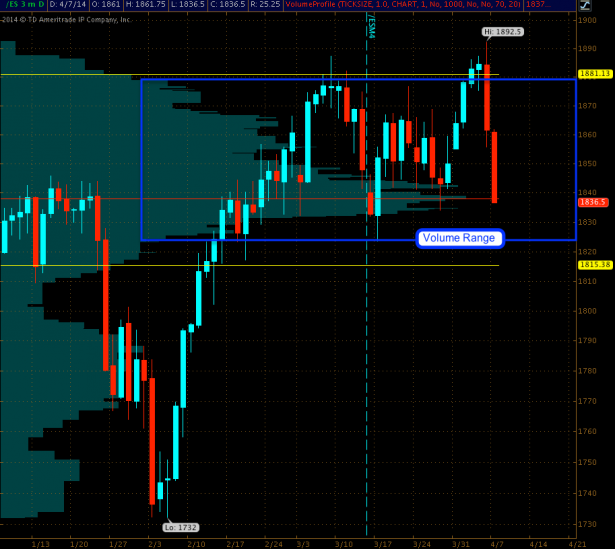 The volume profile chart shows us near the bottom of the high volume range we’ve been bouncing around in since early February. As you can gather participation drops off quickly after around 1830. 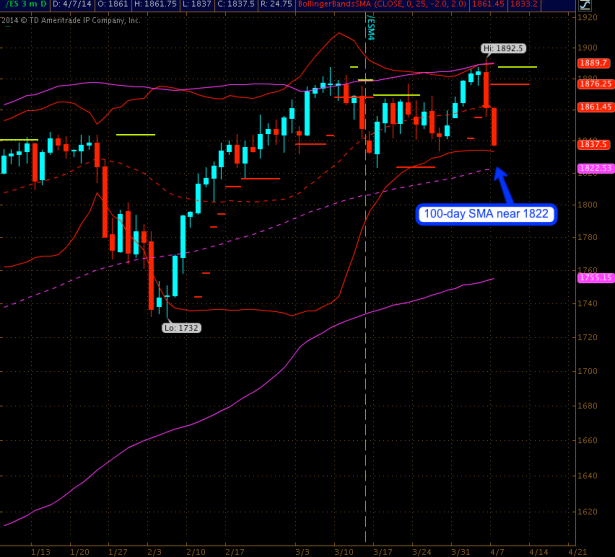 There’s not much in terms of technical support there and even the 100-day SMA on the E-Mini is looking a bit iffy. It’s been a while since it has been tested, so let’s look what else we got. 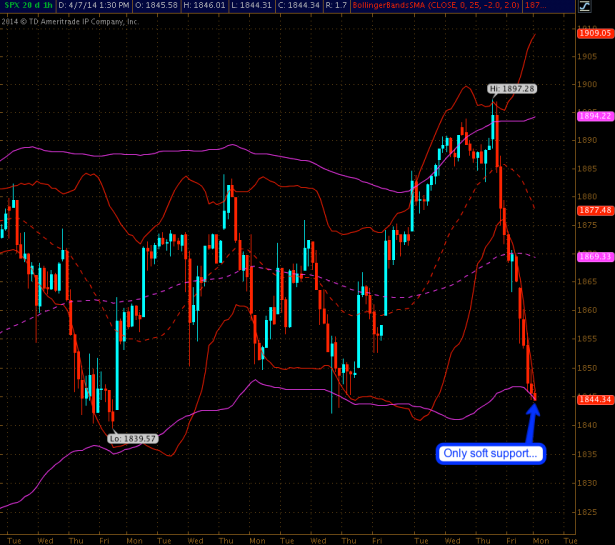 1844 came and went already since I took this snapshot. Which is why I called the 100-hour BB soft support. In strongly trending tape like this you cannot rely on upper/lower Bollingers. There need to be more in place to justify a counter directional play. 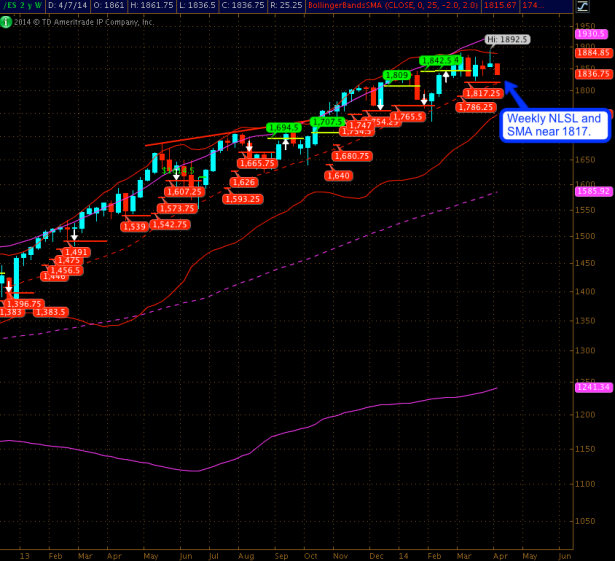 The weekly has us in mid-air until about 1817 and if things don’t slow down here near the close then it’s possible we’ll pay it a courtesy visit. 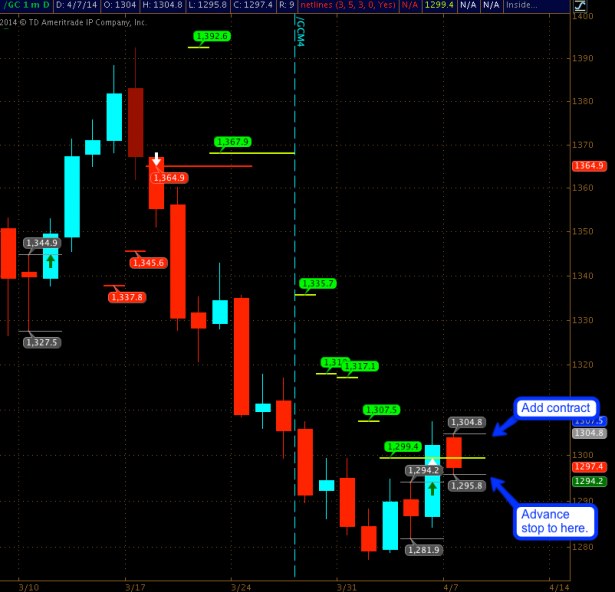 Gold campaign update – not elated about today’s drop lower but it is what it is. As we’re painting an IP we’ll move our stop to the lower trigger. You can add a contract if we run back up and breach today’s highs. May be a LKGB – we shall see… 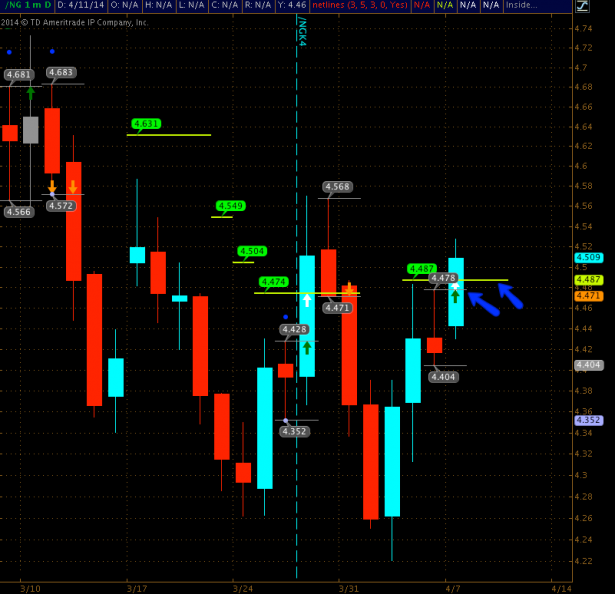 Natgas – that one we took this morning (sub setup from Friday) and it’s looking good! Already breached a NLBL and that’s a definite plus. But don’t get too comfortable yet – Mrs. Natgas is a cruel mistress and we are not in the clear just yet. 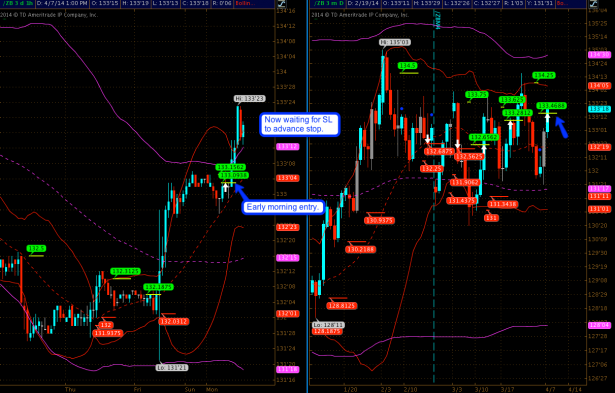 ZB update – that also was a sub entry from this morning actually. It triggered like textbook at the NLBL and hasn’t looked back. I’m now looking for a spike low so I can advance my stop. Also a positive is the NLBL breach on the daily panel, so if all goes well we may turn this into a daily campaign. But I would keep the trending campaign management via the spike lows. 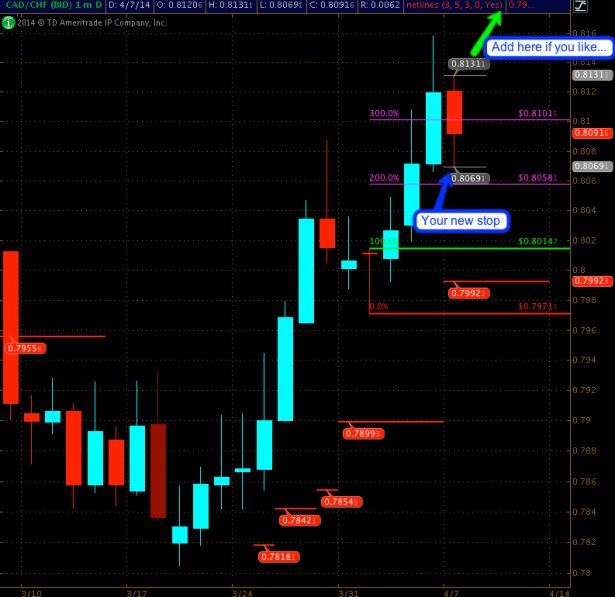 And another update – this time on the CAD/CHF. Here we were kicking butt and taking numbers but today we dropped back half of what we earned on Friday. Bugger – we’ll be closing this one out today as we have breached 2R and will probably close below it. So ignore what I typed on the chart – I got it wrong. Today’s long trigger on the IP is however valid – and so is the short trigger of course.

Two more goodies below for my intrepid subs:

Happy hunting but keep it frosty!