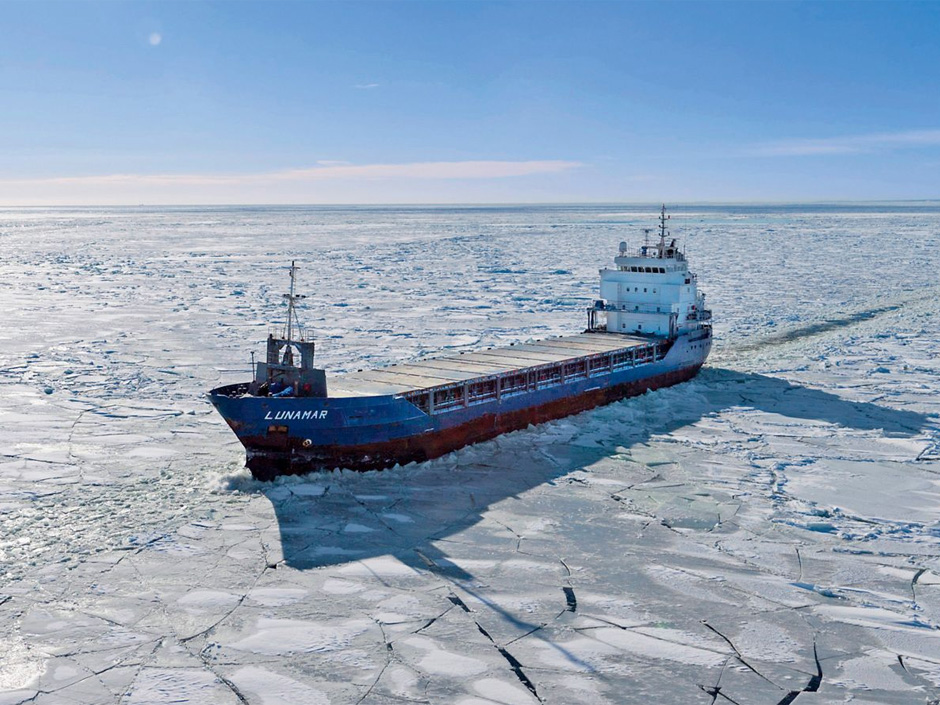 I’ve seen a lot of crazy things in my time as trader but yesterday’s session in the May crude futures easily tops them all. Now I know that there are many pundits out there claiming that crude futures dropping to a historic low of zero and then continuing lower settling at a shocking -37.63 isn’t a big deal and can be easily explained away. Well, I beg to differ – and let me be very clear in stating that it was a very big deal and that we should take notice.

For anyone who’s interested in the nitty gritty I will do my best to explain what happened yesterday. For everyone else who want the TL;DR: The wheels just came off the crude futures market. 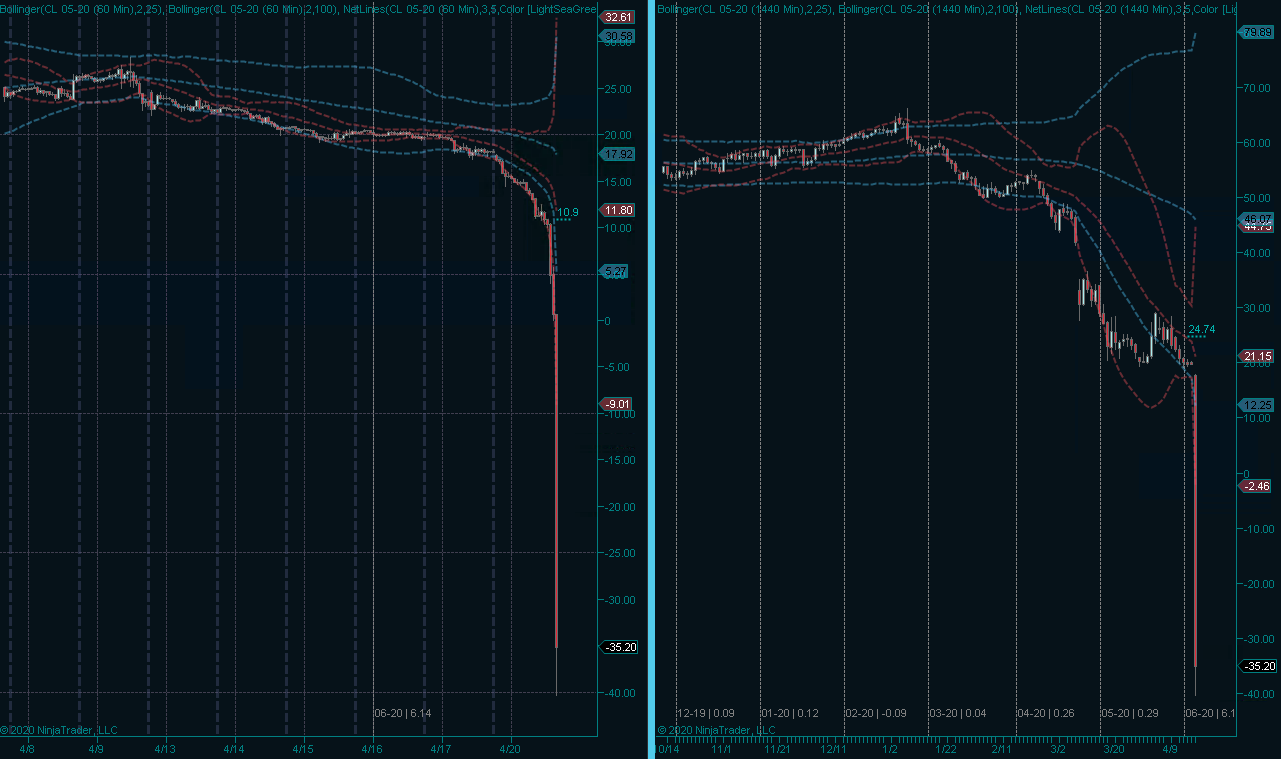 So for everyone who spent the day quarantined in a cave: WTI crude oil futures settled at -$37.63 per barrel on Monday, down a whopping $55.90 on the day. This not only constituted the largest price drop for crude in living history at over 300%, but it was also the first time that the WTI futures market fell below $0 and even worse: stayed there.

It’s no big secret that the oil market has been battling on multiple fronts over the last few months – namely storage limitations due to a flood in overproduction, thus resulting low prices, conflict within OPEC members, and yesterday outright bad timing.

Most of you are probably familiar with the United States Oil Fund ETF a.k.a. USO and it was one of the main culprits or should I say catalyst for the historic decline in May WTI futures. The reason? Because that contract expires today, on Tuesday. 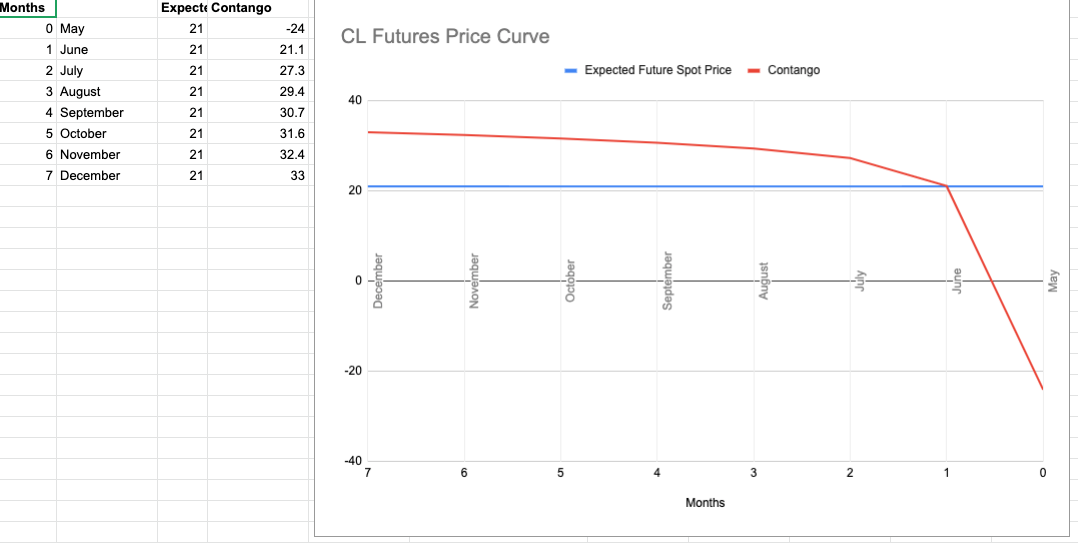 Per Bloomberg as of last week USO was still holding 25% of all outstanding shares of May 2020 WTI oil futures (CLK20). And since an ETF like USO only deals in paper barrels it was not eager to actually take physical delivery of any amount of oil. Not that they would have been able to actually take possession if they wanted.

Now here’s the problem: Neither was anyone else and the result was that they were forced to dump their open contracts, no matter the price. And those that normally would be more than happy to take delivery at discount prices – or even for free had no ability to do so or were incapable of doing so due to the stay-at-home orders that are still widely in effect. 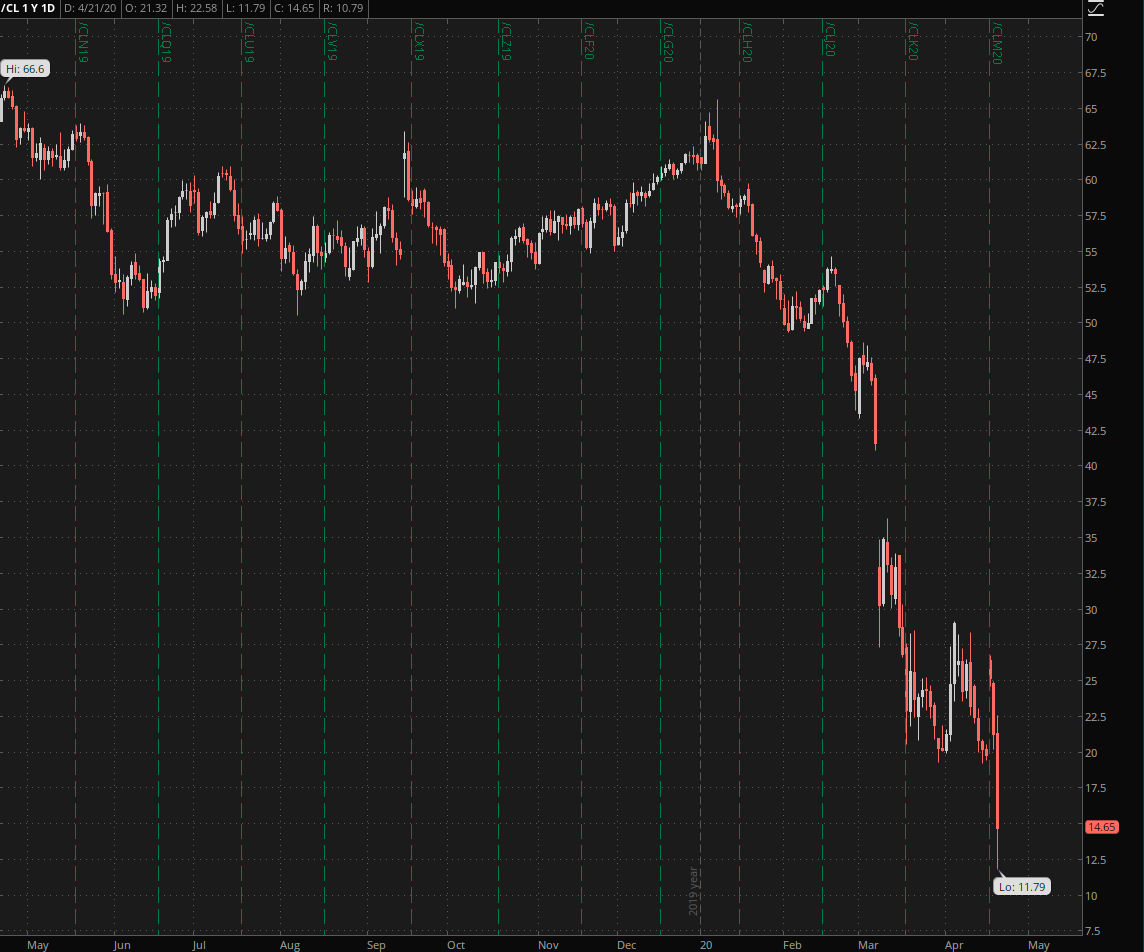 Now this is where you may say: “But Mike – we’re now coming out of the lockdown, so the odds of this happening ever again are probably very slim.” And yes, you would be right.

What I’m also worried about is how many players went belly up yesterday and won’t be back at the table – ever. And therefore what I am worried about the most is what this means for what by all definitions is already a very small market. Maybe new players will arise and perhaps things will bounce back but if nothing else yesterday’s events represent the proverbial canary in the coal mine for what lays ahead on several fronts.

Large market dislocations like these usually don’t just appear and then are quickly forgotten. Everything is connected and a disturbance in one sector can quickly spread into others, and that’s not even counting in a possible transition from COVID-19 to COVID-20.

Does anyone truly believe that this epidemic will be completely defeated by late fall of this year? I sure don’t and I leave it to the reader to ponder the possible consequences in regards to the global supply chain on various fronts, including crude oil. 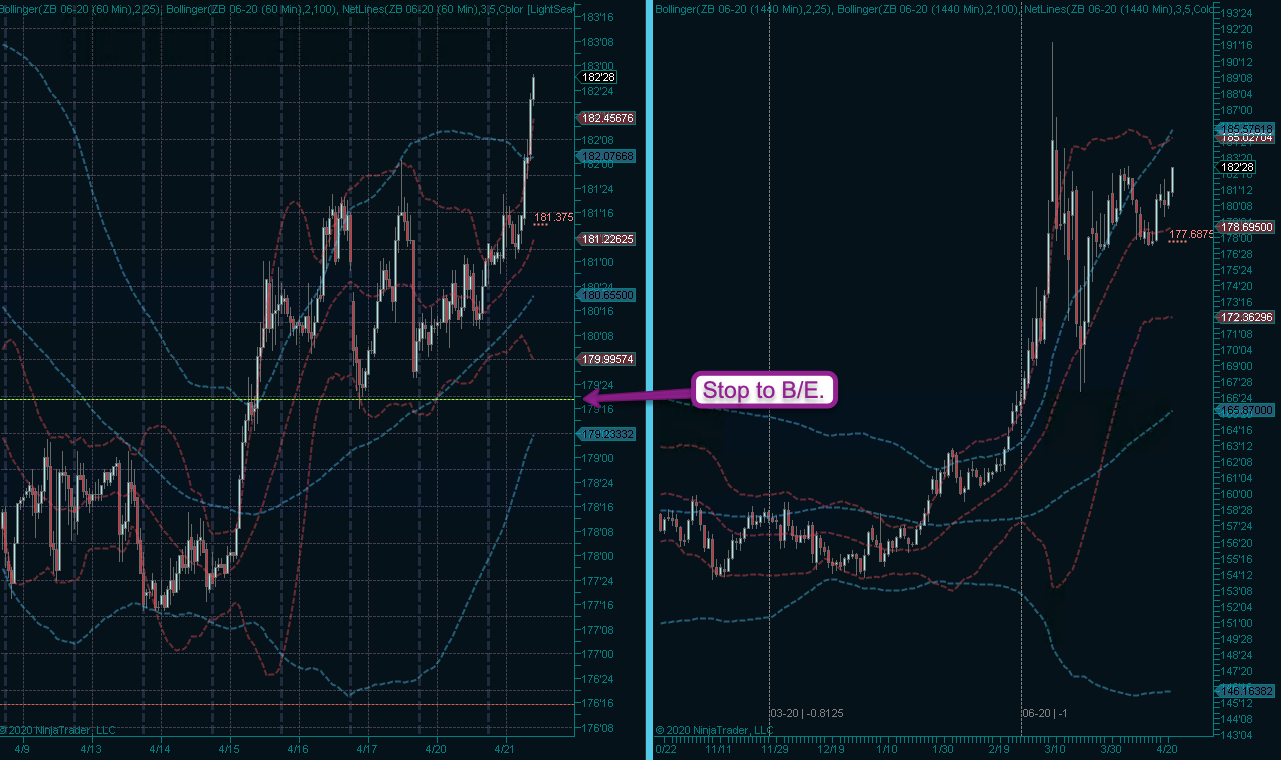 Quick update on my ZB campaign: I was a bit nervous about this one as participation has completely dried up this month. However thus far it’s going in my favor and I’m advancing my stop to break/even. 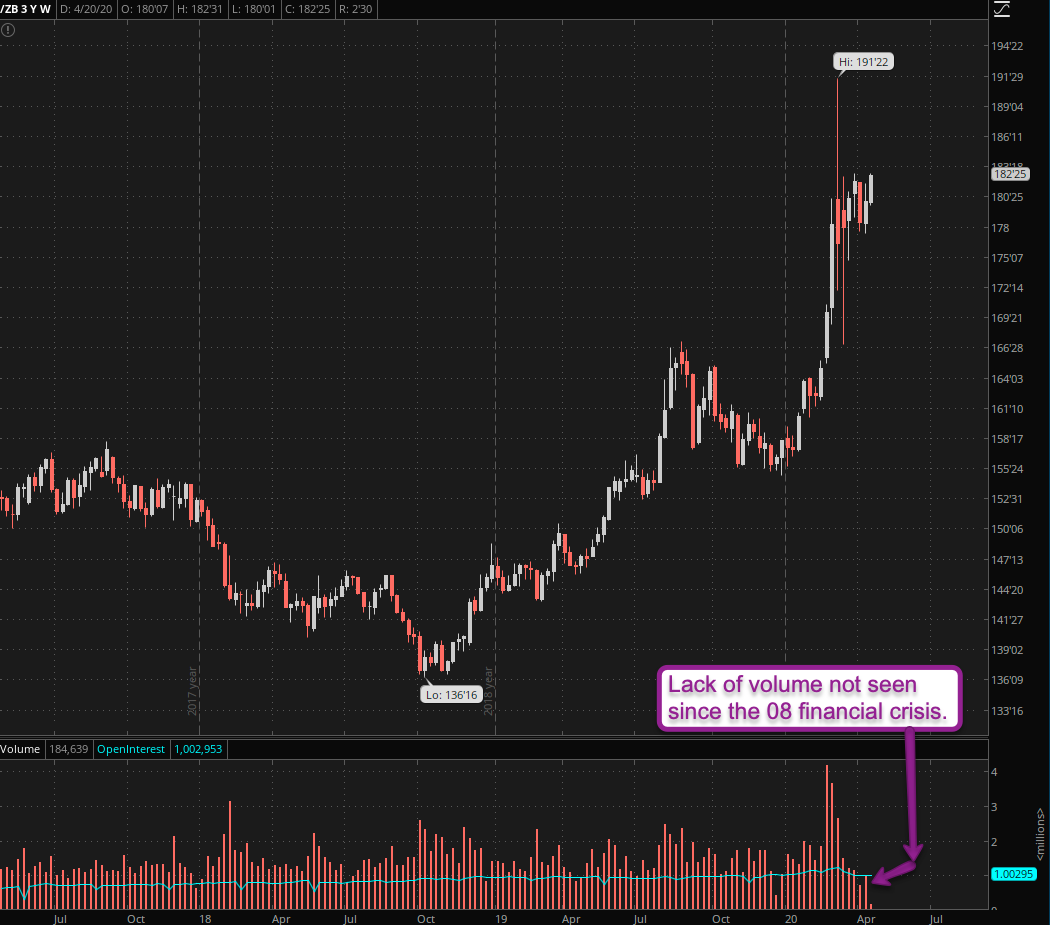 Here’s a panel of what we usually should expect in terms of weekly transactions. We haven’t even breached 1 Million transactions per week throughout April and this week most likely will once again close below. So who else is buying beside the Fed and me? 😉

P.S.: And here I was several years ago bitching about the fact that retail traders mainly focused on trading equities and completely dismissed forex or futures. One of the arguments I sarcastically presented was that I had never ever seen a futures contract go to zero. Boy oh boy – little did I know that I would be proven horribly wrong just a few years down the line.