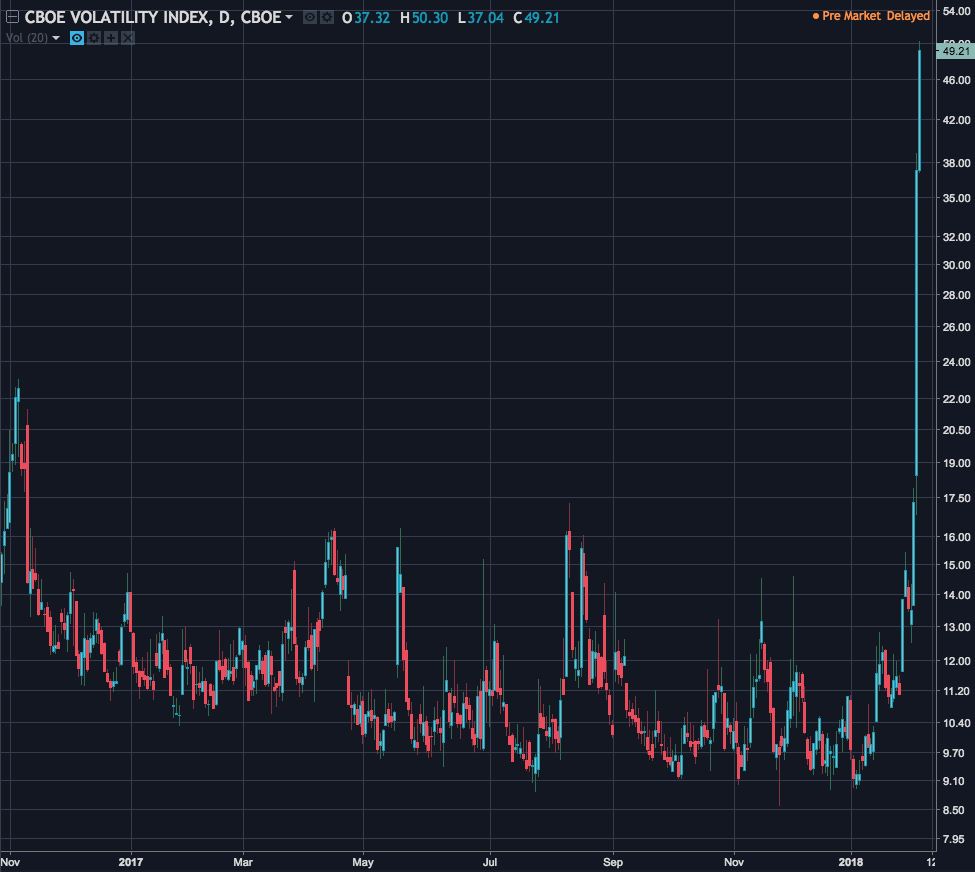 Effectively yesterday’s wipe out in equities will be remembered as the day the IV short trade died. As you all recall I have been rather prolific on the subject of implied volatility over the years and I’m not averse to admitting that it has become a bit of a professional obsession of mine. Thus it was just natural that I would be raising red flags when seeing (repeated) signs of a possible market dislocation on the horizon. Which I then did right here, cautiously and as productively as possible, given the fact that many a bears species have come extinct over the course of the past decade. 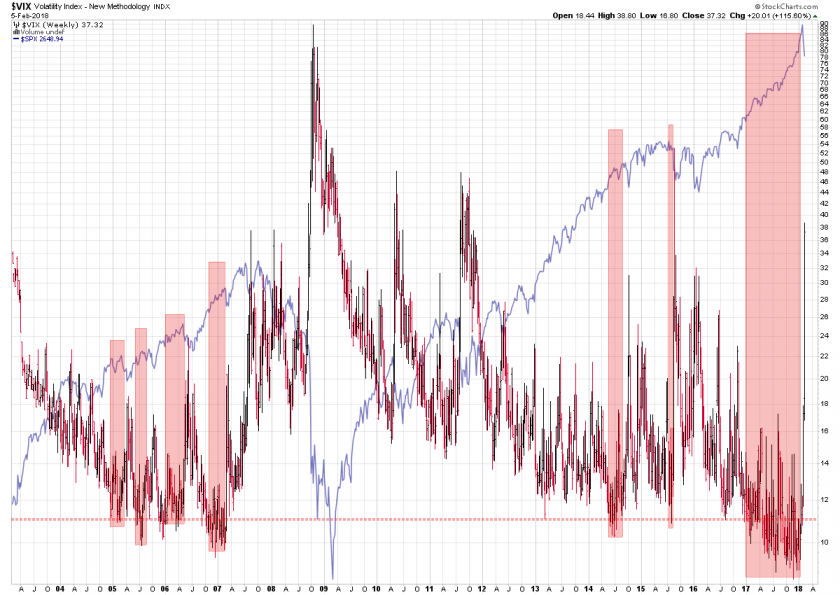 Let me set the stage, especially for some of you noobs who had the misfortune of not being a long time visitor to our digital den of market domination. To put it bluntly: What transpired in equities and to that extension in implied volatility indices over course of the past year has been completely unprecedented and there’s a very good chance that you will not see anything like it again for the remainder of your life.

Well regarding the latter I may end up proven wrong but I’ll for sure will be dead by then, so who cares? To truly appreciate what is going on and what will most likely transpire over the course of today’s session, it is essential to understand this: The VIX has spent as much time below its 11 mark over the past year than it has combined over the past twenty years. And that ladies and leeches of course includes the period preceding the 2007/2008 financial crisis.

How we got here and how irrational exuberance in both equities as well as crypto currencies could could develop once again, only a decade after an economic crisis causing shock waves still felt up to this day, is a topic for another day. But I can dumb it down for you and just give you the short answer: human nature.

Now in my introduction I mentioned red flags and if you’re not a subscriber you may have missed my repeated warnings that something was very amiss and that a serious market dislocation was becoming increasingly possible. I posted quite a few over the past two months but here are the top two contenders: 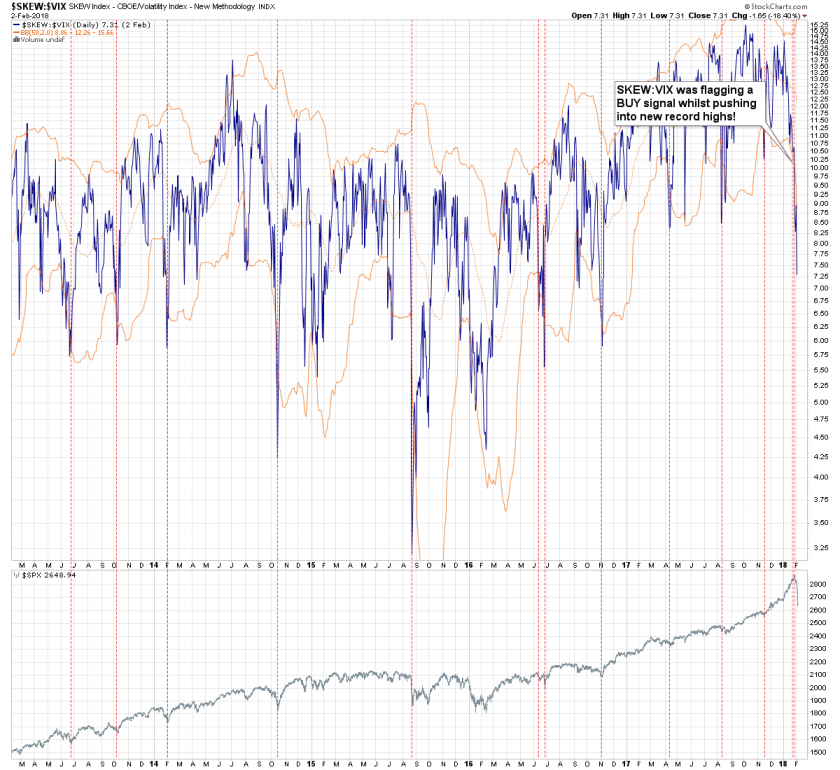 CBOE SKEW vs the VIX – one of my favorite ratios when it comes to assessing buying opportunities. And it’s not surprising it would be flagging one right now based on historical precedence. After all IV across the board has exploded with more to come today judging by the pre-market tape. Although the SKEW was designed on a good premise in reality it’s actually pretty useless and didn’t disappoint in that regard once again over the past week. But in ratio with the VIX it’s extremely useful when it comes to picking dips at least.

So imagine my confusion when it was flagging well over a week ago despite the fact that equities were trading at record highs. That was one of the first signs that market makers at least were getting a bit antsy. While the VIX was creeping higher steadily along with rising equities (also a bad sign) SKEW held steady and didn’t flinch. 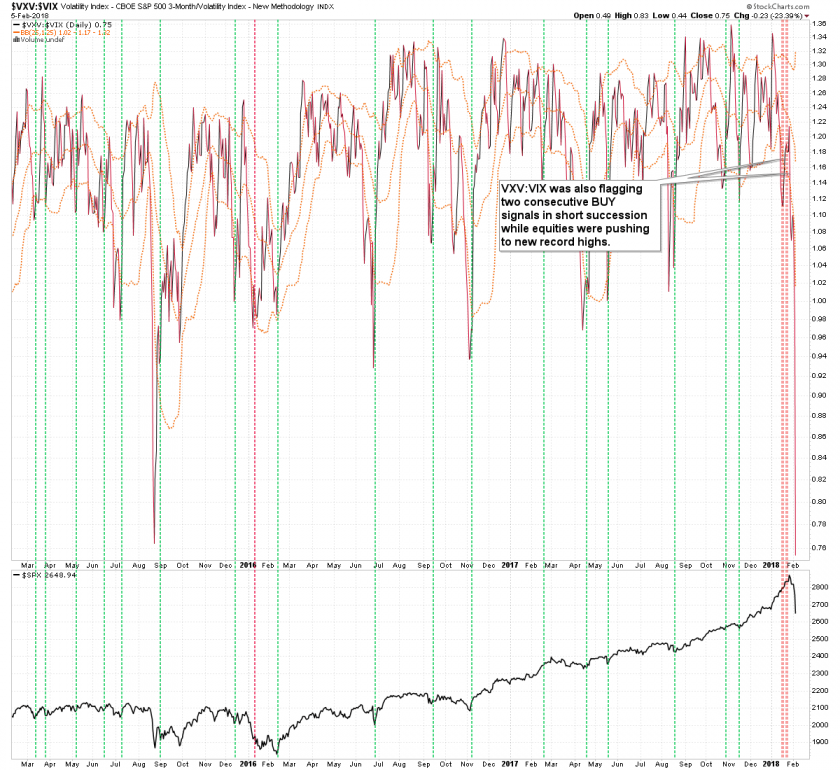 The second red flag, as so often since I started this trading blog almost a decade ago, was the VXV:VIX ratio. Both short and long term IV was pushing higher but the VXV was clearly lagging the VIX (causing a drop in the ratio). Once again this is a phenomenon usually observed after a market correction and not ahead of one. In 20 years of looking at charts I have seen occasional aberrations which however quickly resolved itself in a day or two. I have never seen a divergence like this go on for a week or two.

Given an effervescent bull market across the board with the USD tumbling to ever lower levels my recommendation was to proceed cautiously and consider scaling out of long equities position. And I’m glad I did as this may just be the first leg of more pain to come.

As a result of yesterday’s IV explosion the inversely running XIV as well as the SVXY dropped over 80% in after-market trading yesterday and eventually had to be halted. Which basically has wiped out almost all of the NAV in both ETPs and there actually is a pretty decent chance this event will end up wiping them both out. UPDATE: I just learned that the Credit Suisse declared an acceleration event and is shutting down the XIV on February 20th. The shares will likely be zeroed out after closing at $99 yesterday. The move wipes out $1.5B in an instant. 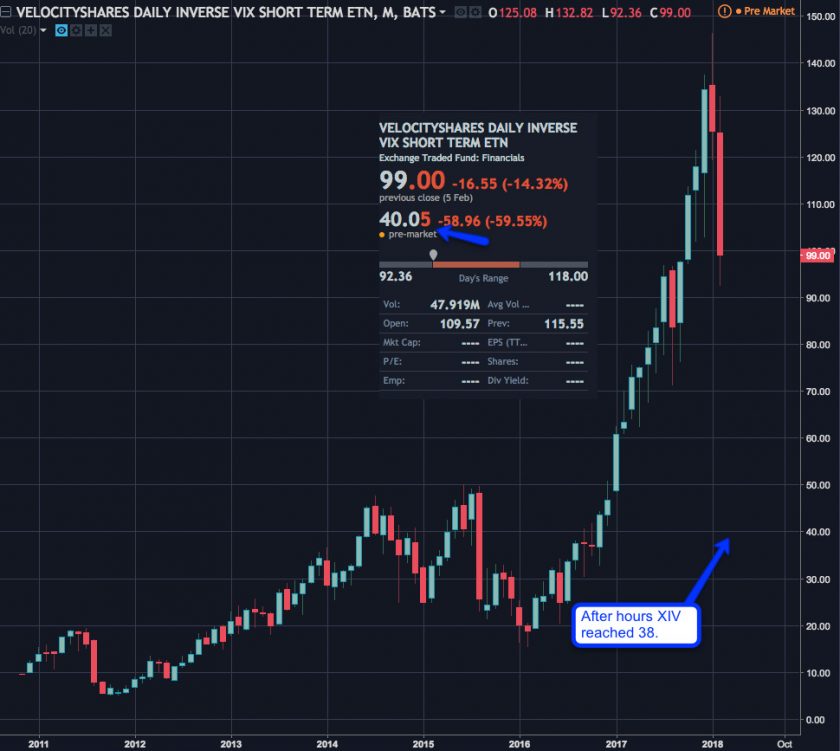 The longer term implications of this generation’s Black Monday will most likely be felt for years to come. For one trading IV products will not be same again for a long time as popular risk models effectively went up in smoke yesterday. If nothing else you won’t bee seeing a VIX trading in single digits anytime this year again and most likely quite a bit longer. If I’m wrong on that end I would actually be ecstatic and the first to bet long implied volatility.