The Fate Of The Dollar 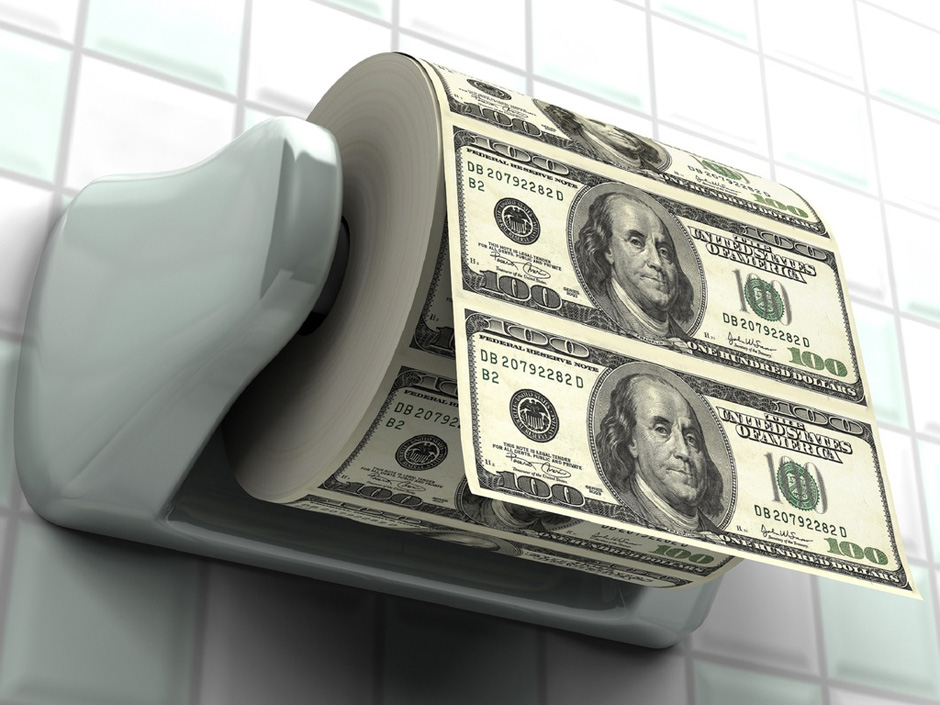 I don’t want to sound overly dramatic but the fate of the Dollar for the remainder of this year and most likely well into 2018 will be decided tomorrow when chairwoman Janet Yellen will announce whether or not the Federal Reserve is finally ready to kick start a reduction in the $4.4 Trillion balance sheet it accumulated over the past decade. 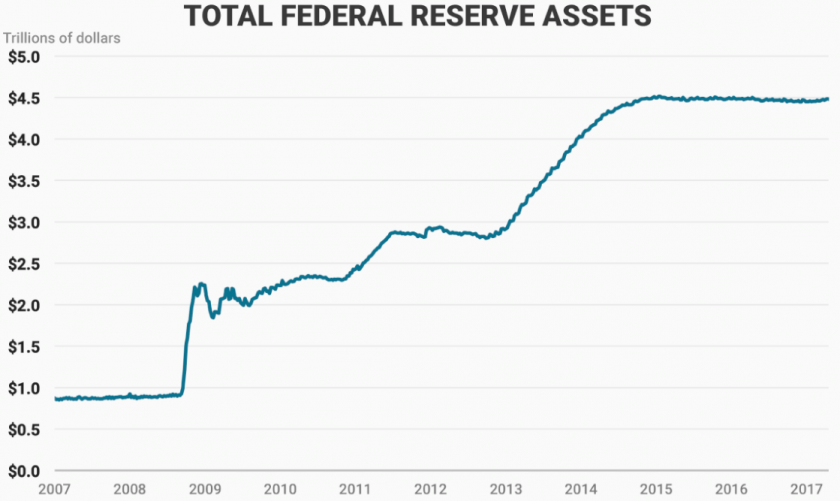 I spent a bit of time picking through a few pertinent MSM articles this morning and without exception every single of them expressed the same prevailing attitude that seems to have become the status quo since QE began in earnest in 2007: It may be too early, the Fed may be pushing too hard (snicker), we may risk upsetting the economy, bond investors remain jittery, yada-yada. It’s like asking a crack addict on when exactly the time may be right to finally kick the habit and go cold turkey. The answer invariably will always be the same: perhaps tomorrow. 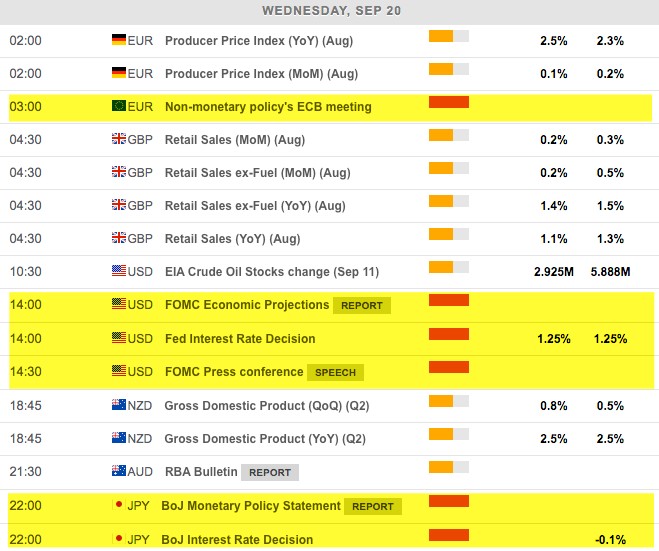 But wait, there’s more. Early in the morning Wednesday the ECB will be holding what’s officially termed a non-monetary policy meeting. But given the massive rise in the Dollar it may decide to somewhat put the breaks on what is increasingly turning into a significant damper on inflation across the Euro zone. The Germans love it (until they see their Q2/Q3 export reports later this year) and pretty much everyone else South of Bavaria hates it unless they’re on vacation abroad.

And to round things up later that night the BOJ is scheduled to make its own interest rate decision. So it’s fair to say that we’ll probably see a few wild swings in the Dollar tomorrow and perhaps in equities as well.

Especially given the fact that we continue to push higher on what I already have described as pretty dubious volume. Once again DVOL was running neck on neck with UVOL and like in the previous three sessions a positive close was pinned in the final hour. Given the timing and the context of new all time highs I would side with distribution instead of accumulation.

Given that the VIX has once again dropped into single digit territory this may not be a bad time to grab a bit of downside insurance. If I’m wrong then we may see a drop below 9 but if my concerns turn out to be valid then I don’t expect the VIX to be in single digits again for a good time to come. 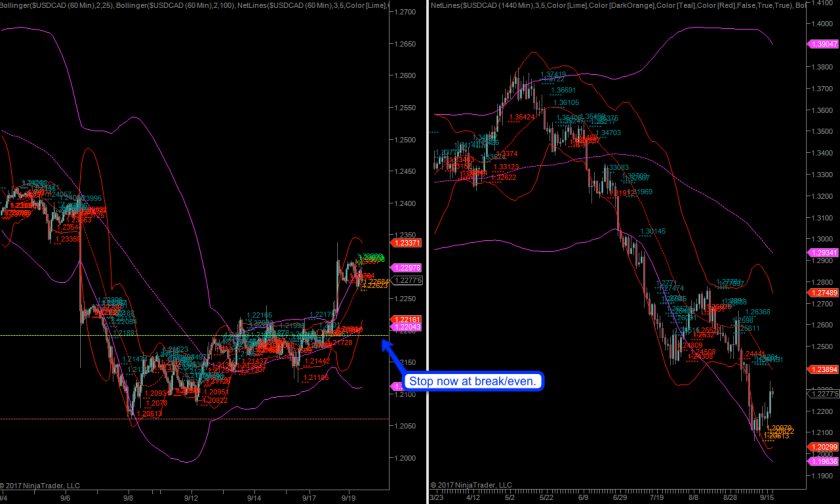 The USD/CAD seems to agree as it’s been able to gain a bit of ground over the past session, enabling us to move our stop to break/even. 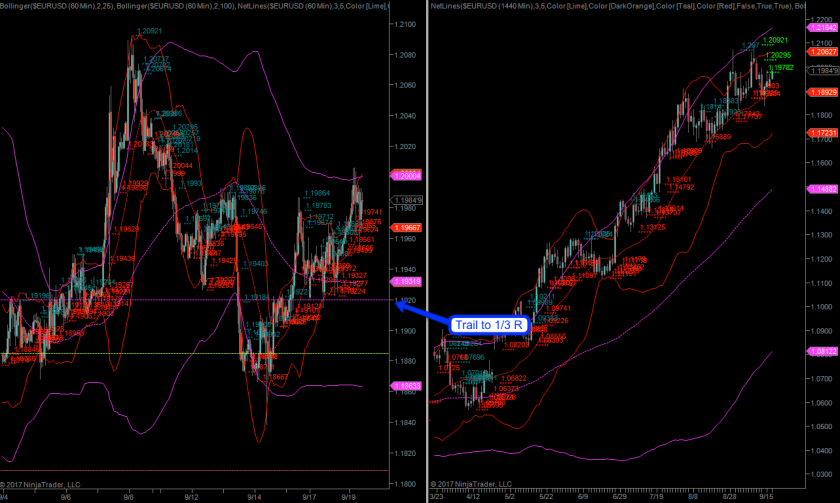 Curiously so has the EUR/USD, much to my chagrin of course, but as we’re still long here I guess I won’t have to pawn the family jewels just yet. Trail here now goes to about 1/3 of an R, which ain’t much but I’m playing it cautiously, plus given the swings I anticipate tomorrow odds of a stop out this close to my entry range are very real. May as well lock in a bit of coin. 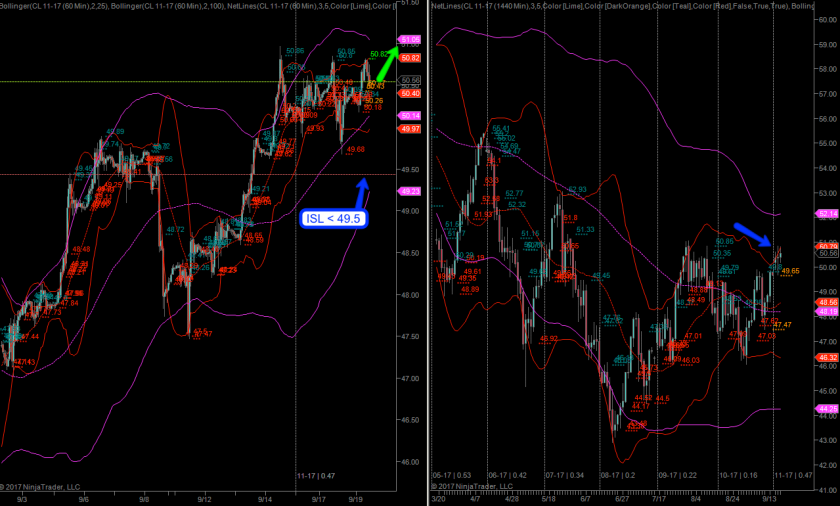 Given three separate central bank announcements tomorrow it’s almost impossible to predict how markets are going to respond to various swings in the Dollar. The only setup I like today is a small lottery ticket on crude. It looks like it’s ready to turn into trending mode but at the same time a strengthening Dollar tomorrow would leave a mark here as well. 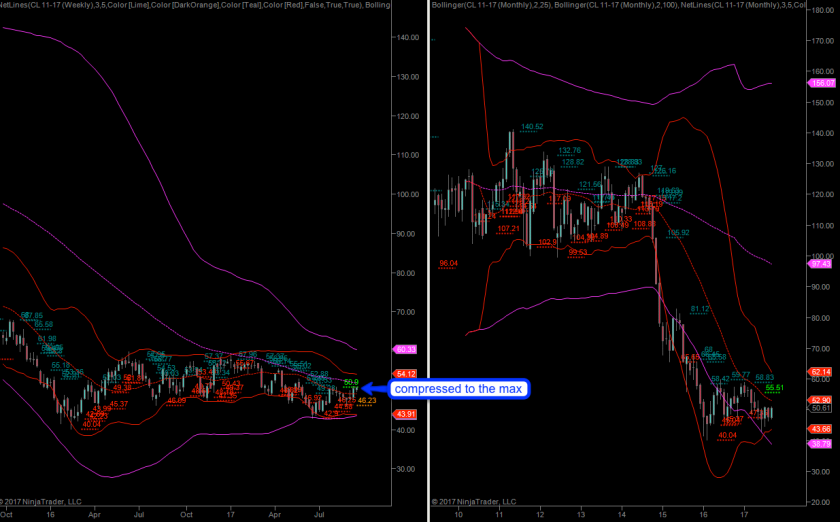 The main reason why I’m considering this campaign in the first place is the weekly panel which at this point is squeezed to the max. Should a breach higher happen it’ll most likely trigger a boatload of stops, so I weighted the options and decided to take out only 0.25R. The odds of success are small but the potential payoff is significant.

This will probably be my last post of the week as a very old friend of mine is only minutes away from arriving. I met him as a young buck about 25 years ago after I moved to Los Angeles. I have not seen him in over six years and suffice to say we’ve got a lot to catch up on. I myself have been feeling the burn a little lately especially after my moto accident less than two weeks ago. So a few days off will hopefully do wonders to re-energize those old batteries. Of course all services and systems will continue to run as usual and if you experience any problems don’t hesitate to shoot me an email to admin@.