Tonight you are scheduled for a visit by the Evil Lair’s Four Horsemen:

Let’s see what those scoundrels have in store for us: 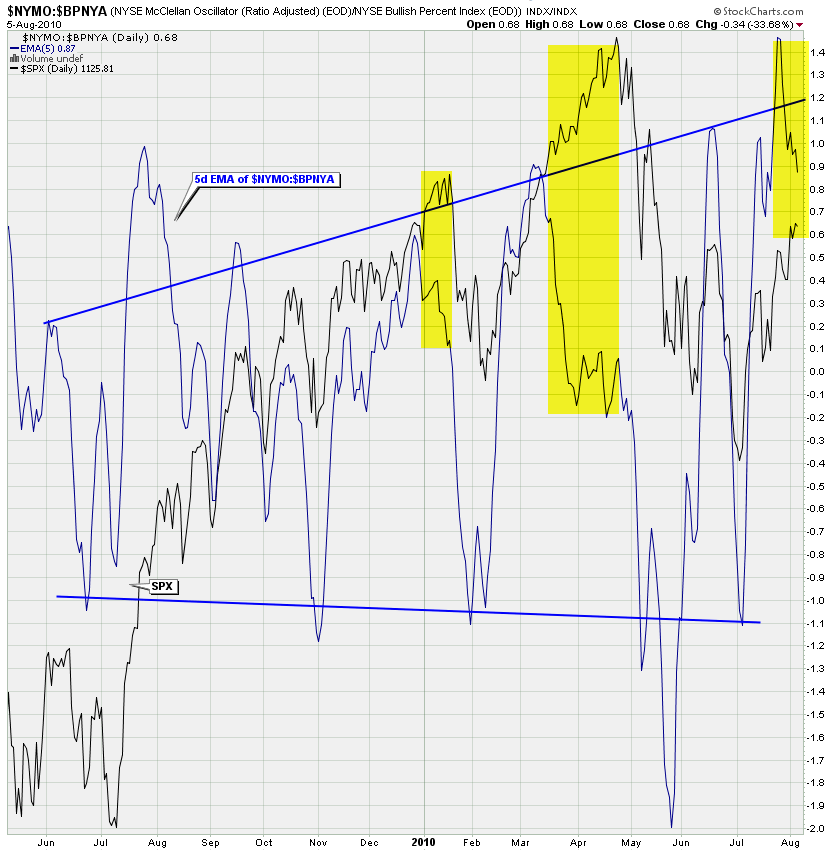 The White Horse – not particularly evil but rather a representation of righteous bears on a course toward self destruction. This chart tells me that we are already in the late phase of the current swing up. Which is accompanied by rising prices but a falling NYMO:BPNYA ratio. 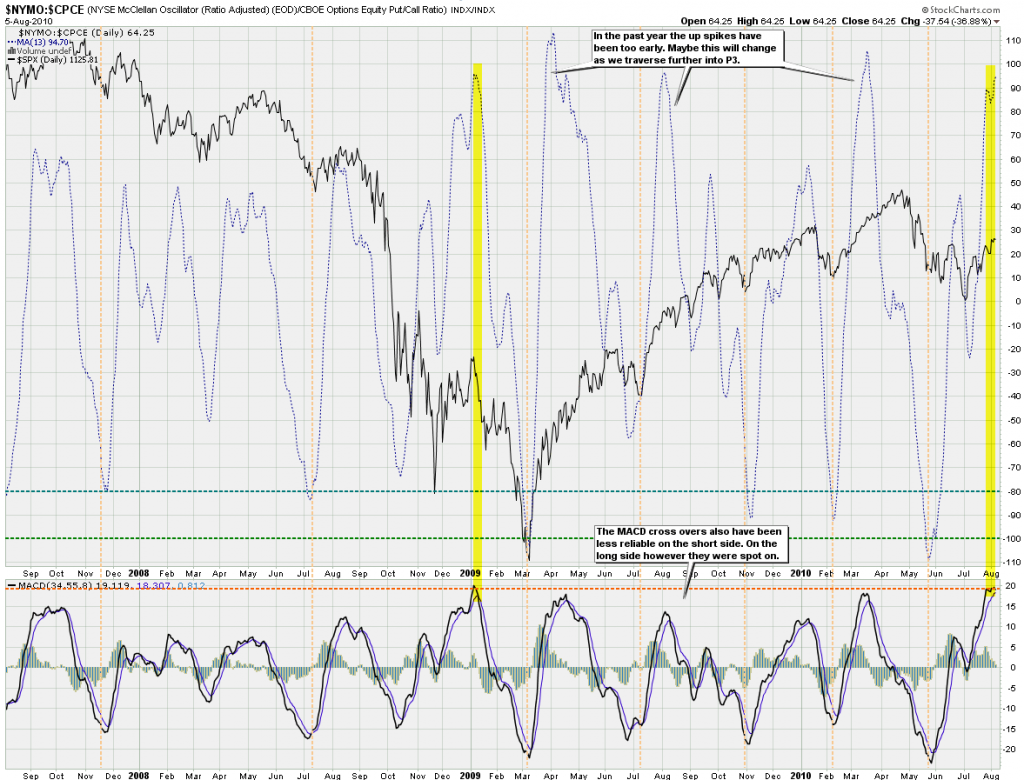 The Red Horse – representing the incessant war between bullish and bearish legions – the former greatly outnumbering the latter. Which is why we have to be better trained and a lot smarter – think Sparta and 300. This is Spartaaaaaa!!!!

Anyway, the NYMO:CPCE ratio (think medium term momentum divided by put/call ratio) is back to where we like it the most – meaning it’s overbought to the hilt. Does however not guarantee a drop right here – it’s often delayed – same old, same old. However, the shot out MACD gives me hope that we may actually turn and fall hard after we finish the obligatory circus clown parade leading us into 1160. 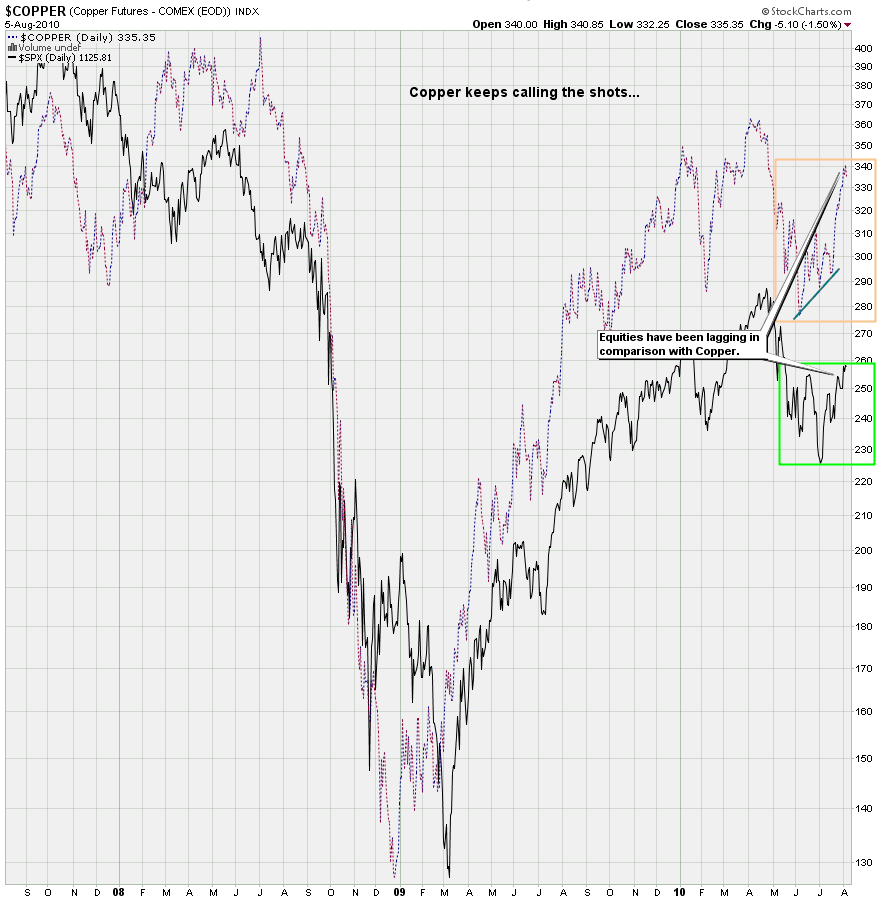 The Black Horse – representing famine. Thus far copper (traditionally an important representation of the health of the economy) is busting higher just like most commodities recently. Russia just announced that it will stop exporting wheat due to record drought conditions (and raging fires everwhere), which will probably create a lot of volatility in those futures pits. May be short term inflationary and push commodities higher – and stocks with it as the Dollar continues to be stomped on. Although – we are currently at 6% Dollar bulls, not sure how much lower we can go there. But it’s been a brutal summer for ole’ bucky and may continue for another week or two. Currencies and futures like to extend – remember how long it took for the Dollar to find a floor late last year. 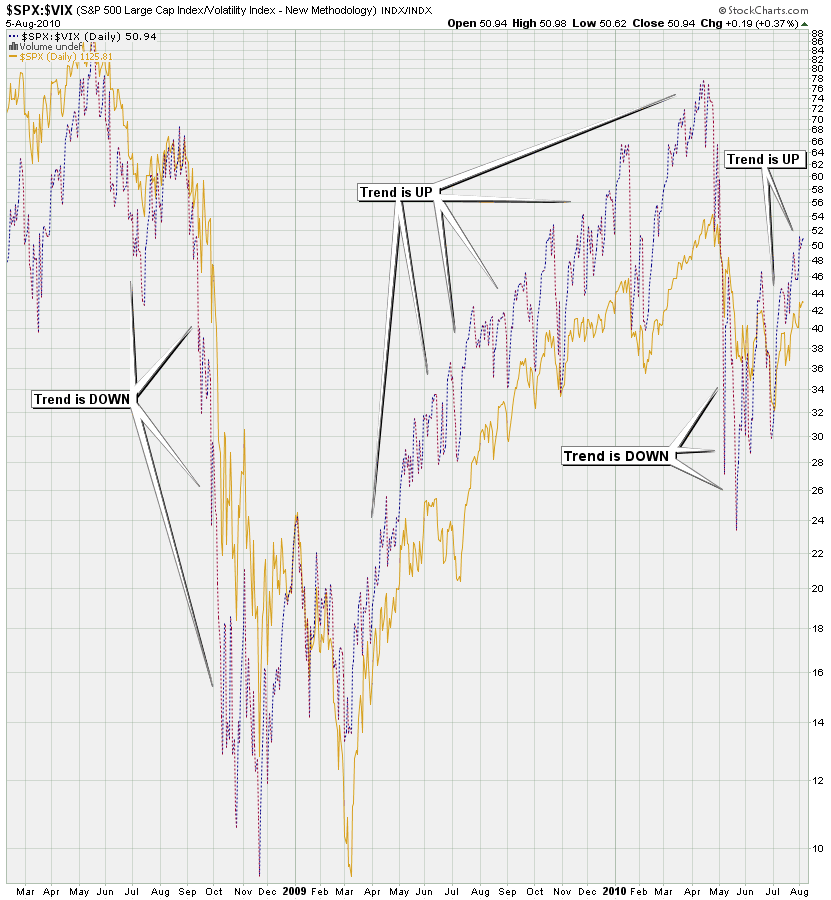 The Pale Horse is the forth and final horseman – representing death. As in the death of Mole’s chart reading abilities. I can’t believe I have been so blind since I started looking at this chart. Fortunately tonight the scales fell off my eyes and I saw the light. No, I didn’t see the Holy Mary (I’m probably last on her list) but I finally saw what should have been staring me in the face. And you guys too – shame on you!

So, the big deal here is that the SPX:VIX ratio obviously is leading the trend. As long as it’s below the SPX the trend continues down. When it’s above the trend is up – that simple. Usually reversals end when both touch – now that is very interesting – wouldn’t you agree? Short/medium term this chart doesn’t have too much value but for long term trend traders this may just be what the doctor ordered.

I need to figure out how to create a MACD of an SPX MA and an SPX:VIX ratio MA and then paint that with a histogram. Reason being is that it seems to me that extremes in the distances appear to rise the odds of reversals. Any ideas on how to do that? I could probably hack it up in TOS or NinjaTrader but it would be nice to be able to do that in Stockcharts.

Of course the not so good news is that it’s above the SPX right now – and until we see a touch there I would venture to propose that we continue to the upside. The daily Zero also seems to agree right now, so despite tomorrow’s anticipated volatility explosion I still expect at least an attempt of a final run higher. Maybe once we see the blue and gold line converge it may be time to get re-positioned for some downside. Until then we continue to wait out the summer of pain.