The Myth Of Mean Reversion

The ‘myth’ of that fabled mean reversion is that it always happens. However the problem is that it only happens most of the times. Confused – good? It’s healthy to shake up that old noggin’ every once in a while – to let go of some of those core beliefs that have done nothing but make your life a living hell trying to bank coin in the market. 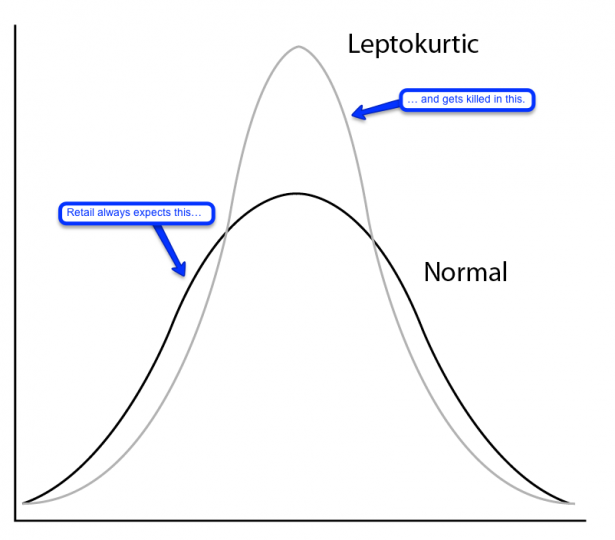 It’s extremely important that you develop a sense of what market you are trading and I’m not referring to a sector, a particular type of market (i.e. futures, stocks, forex, etc.), or even symbol. More often than not fledgling retail traders do just fine for a few weeks or months and then suddenly get wiped out. Why? Well, they suddenly thought they knew something and that’s always a problem. But there’s another reason. Simply the market (correctly) claims that it reverses to the mean about 70% of the time which leads traders to start throwing around terms like ‘overbought’ or ‘oversold’. Oooh, that’s so sexy! You really sound like you know what you’re talking about, Mr. Hotshot Trader! Of course in the end we all know where this is heading – they suddenly lose and lose big. Reason being they keep holding red expecting mean reversion. And when she runs against you she often runs hard. Short squeezes are a trend trader’s bread and butter.

Truth be told my math skills are moderate at best but you don’t have a math genius to do this. In fact you can safely ignore all the fancy math involved and just look at a chart, then ask yourself – is this market trending? If the answer is yes and then some, well then you may just be yanking the tail of a leptokurtic market. Heck, it’s all fun and games until you get your hand bitten off. By the way we have covered this topic in much detail before – please refer here and here. Once again thanks to Volar for providing a lot of pertinent context including seasonality. 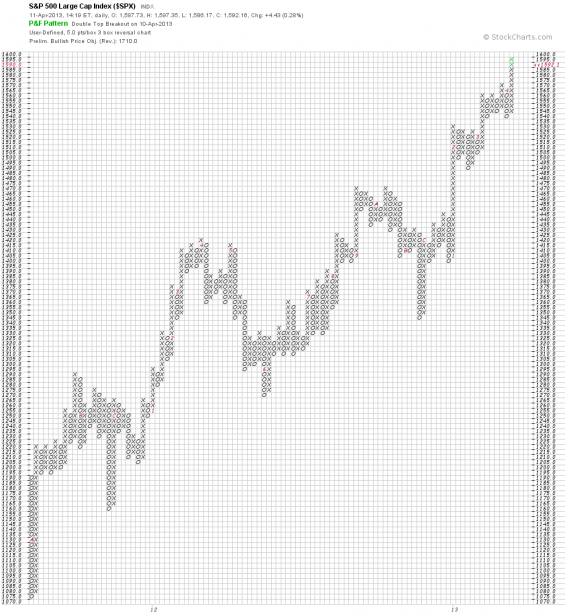 So why am I bringing this up again? Because I keep seeing those words pop up in the comment section again – you know who you are and I’m protecting the guilty (this time). Look the problem at hand right now is that we cannot know how far this puppy will run. Our P&F chart has pointed toward 1700+ for the past few weeks and I although I don’t think it’ll be a one-way run we just may get there by the end of the year. As of right now today equities are in ramp mode – there are no reversal cluster on our map, the volume profile is in virgin territory, and momentum charts have been flagging red for weeks (or maybe even months). And all that means nothing as long as people keep hating this rally – which is exactly why it has continued to relentlessly run higher. 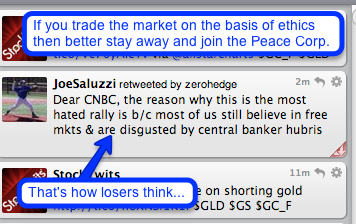 This is how losers think – and have been thinking four years and counting now. I remember back in 1999 when Yahoo was the big dog out there and everyone hated it at 40 – then they hated it at 80 – and suddenly started loving it when it touched 100. It managed to climb into 125 and then dropped like a rock from there. Of course everyone suddenly thought it was a steal at 80, and then at 40, and then at 20, and finally as it approached 4 less than two years later nobody wanted to have anything to do with it anymore.

Seeing a pattern there?  Mean reversion my butt. Overbought – oversold – that’s just empty talk – absolutely meaningless. I tell you what – it doesn’t matter where it came from – all that matters is where it’s going. So look at your charts and don’t think about it in those terms – rather look at the context, the momentum, look at it as a living thing with a direction and potential hurdles in its path. If you can mix that perspective with a good sense of the prevalent sentiment then you are lightyears ahead of 99% of market participants. 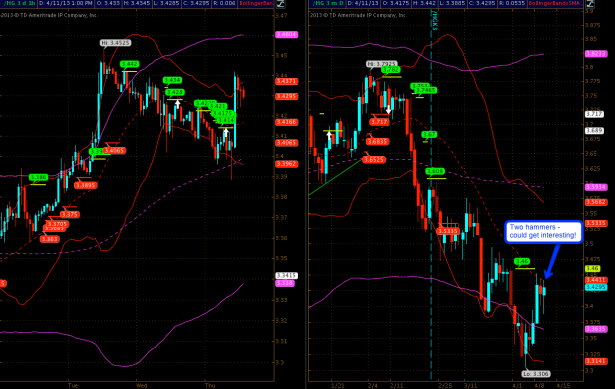 Quick update on copper – I’m currently seeing two hammers and that’s interesting as that 25-day SMA has been holding up. I think the odds of a fence jump have increased but as of right now there is no reason to be long yet. However if we see that hammer breached tomorrow then we may get an attempt to climb higher. Until that happens the trend remains to the downside. 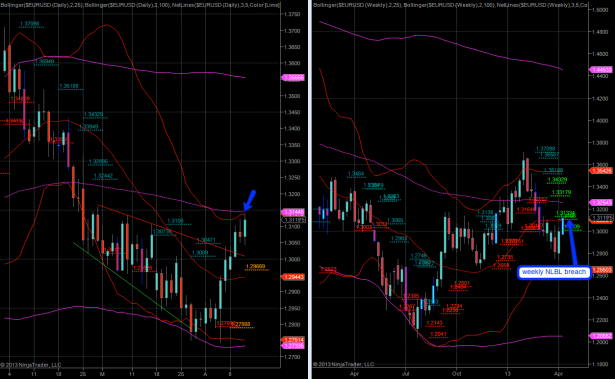 EUR/USD – it has now reached its 100-day SMA but has managed to hop over that weekly NLBL. That’s pretty bullish and if we see that daily SMA breach we probably see a run into 1.325 – which means my exchange rate will once again flush down the toilet. Remind me to raise your subscription rates!! 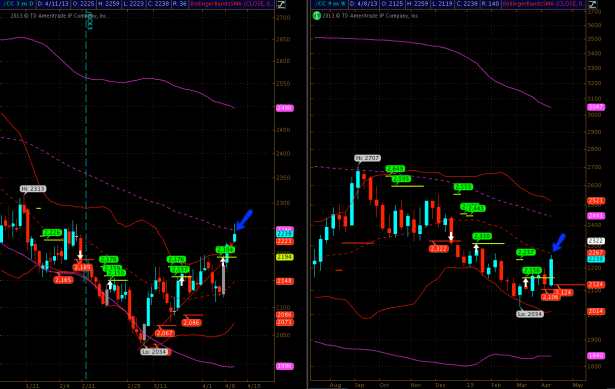 Cocoa also at its 100-day SMA – the weekly is touching the 25-w SMA. Possible reversal here and that shooting star on the daily is a possible harbinger of some downside. We’ll know tomorrow if we see its low being breached. 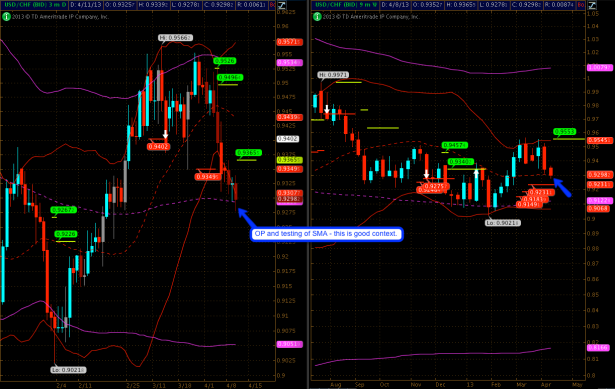 USD/CHF – I suggested this setup to my subs yesterday and it’s still in play – perhaps more so today even. I think the odds here are mixed – that hammer should have held and the fact that it’s retesting the SMA does mean there is more bearish pressure. If it gives way I want to be short. 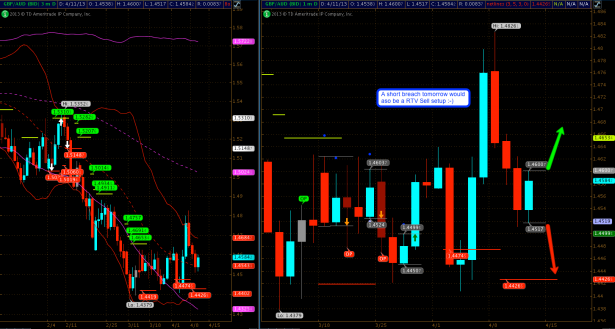 GBP/AUD – very very interesting setup. Yes, we have an inside day but if you watch carefully we may also have a Retest Variation Sell – the trigger would be a breach of today’s low tomorrow. A long breach means we probably run back to the top and that 25-day SMA holds for now.