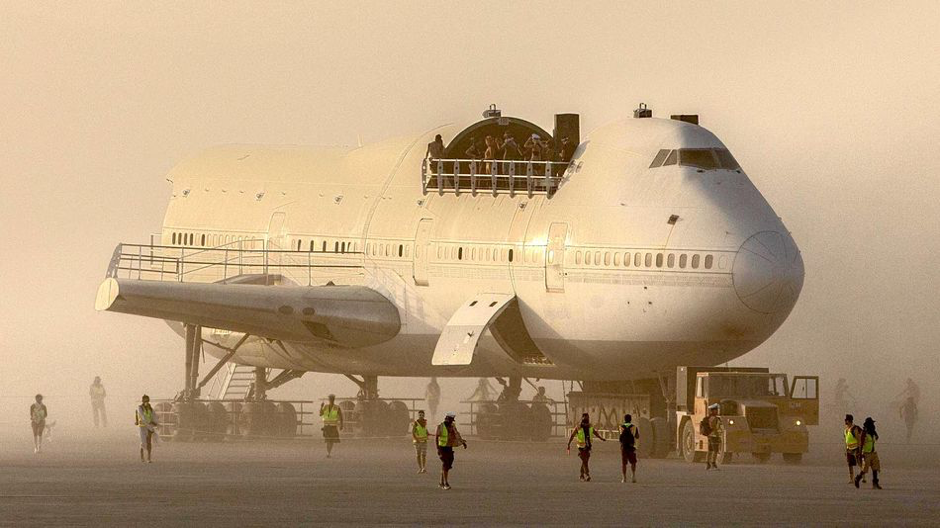 Mole continues his recuperation from putting together his dirth, the System Building Master Class, which is a masterpiece on several fronts. The level of sound quality on the video series probably exceeds the upcoming The Rise of Skywalker and I had to talk Mole out of not recording it in Dolby THX. Jimmy Page spent less studio time at Headley Grange recording Physical Graffiti then Mole spent doing audio production on the course.

His level of video production chops is next level, which is of course what you would expect from a German.

I mean, the Germans never lost a battle in which they weren’t substantially out gunned. And Mole settles for nothing less than perfection, which you probably already know if you’ve been going through his courses. Perfection is also exhausting.

While Mole continues his R&R in the capable hands of Ms. Mole, I am back again to entertain and inform you with some bespoke market knowledge. Today I’m going to babble about VWAP and if you’re a day trader, why you should probably start paying attention to it and studying it with a high degree of compulsion. Similar to how you looked at Playboys when you were 13 years old.

The picture above is the 747 turned into an art car for Burning Man. It’s been at Burning Man for several years, but last year they took it to a new level and added the landing gear, wings and made the roof fold open for an open sky dance floor on the upper deck. On board they had an emotional baggage check, stewardesses in uniform and a concert piano. 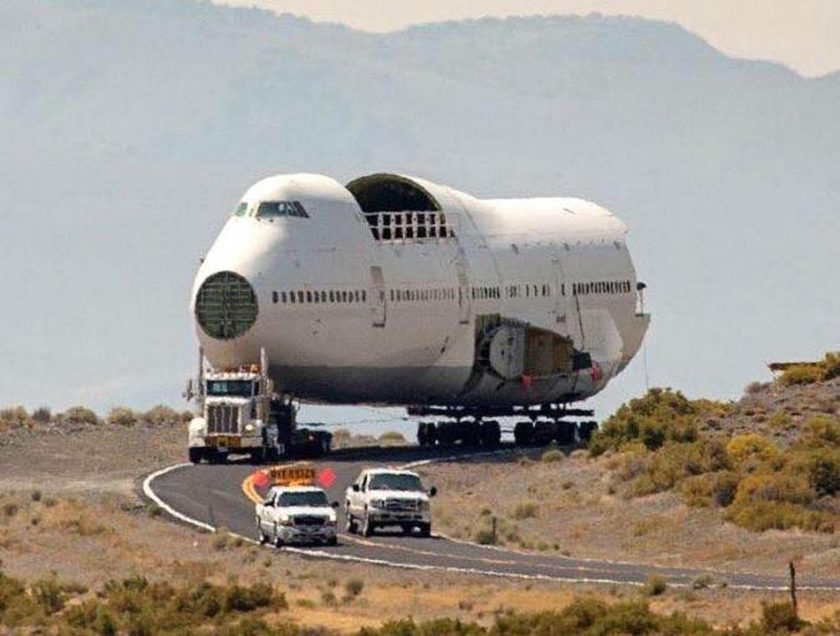 There was a lot of controversy around the 747 at Burning Man since it violated some of the Burning Man ethos. A major one was they hired people to work on it, rather than having people camping there that wanted to work on it just to give people an amazing experience. A major violation of Burning Man culture that I agree was too much.

The hired guns were apparently rude to quite a few burners, but maybe they were on molly when I was there since they were delightful. Regardless of the controversy, my experience of it was ridiculously rad.

Last year it also became mobile, which required a crew of 40 people to move around.. and I stumbled upon it one night at 3:30am, in the middle of the playa. On board playing was the Preservation Hall Jazz Band, which I’m a big fan of. I had just discovered them on a trip to New Orleans and picked up some of their vinyl at a record shop called Peaches. The odds? It was purely random and an experience I will never forget.

As much as we would like to think us individual traders make the markets move, that isn’t the case. At all. The closest I’ve ever come to moving markets was when I realized that I could no longer trade one of my favorite targets ILF. Because some days I was accounting for 5% of the volume. I was a small fish in a small pond and ILF can be really thinly traded some days. 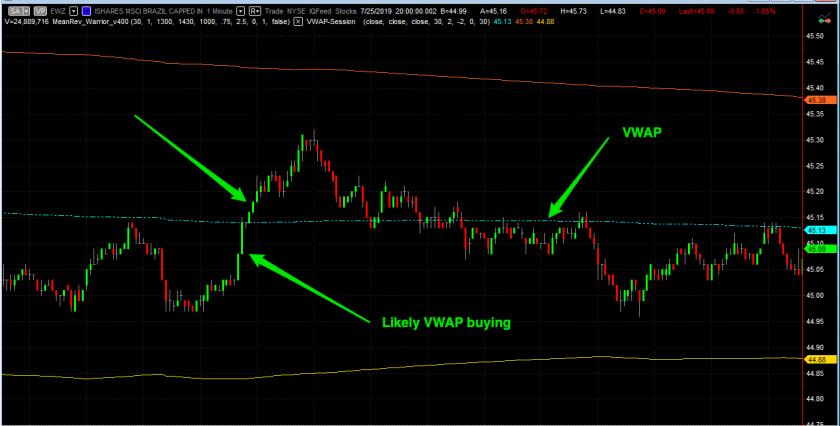 The greater reality is that whales move markets and we just ride the waves. And the key metric whales pay attention to is VWAP, since it’s how they measure the quality of their fills on their massive orders. It also gives them something to whine to their brokers about.

Let’s take two hedge funds, Abe who works at Alpha Chode Partners and Ben who works at Gleepy Capital. Abe and Ben are both traders charged with placing the firms orders with their broker. And both firms are running a strategy where they buy the top laggards and short the top performers. Today, it’s time to rebalance and both Abe and Ben are charged with unloading their long AAPL positions (and shorting TSLA, just because).

After a hard day of slinging orders on Wall Street, Ben and Abe are grabbing a whiskey at the Gallow Green and their conversation goes something like this:

Abe: ‘Bro I had to unload 3 million shares of AAPL today.

Ben: No shit bro’!? Bro’ Me too ‘bro… 4.2 million to be exact. Bro’ I got filled at VWAP plus +¼%, solid fills all day long. Our broker fucking crushed it selling into VWAP. Where did you unload at ‘bro?

Ben: Bro’ ⅜% below VWAP!?! Fuuugett about it?! Are you fo fucckin real? How do you even have a job? They didn’t humiliate you and fire you on the spot? WTF? Are you driving Uber in ‘Jersey or something to pay your fucckkkin bills?

Yes, the reality is traders are measured by where they load/unload positions and VWAP is the measuring stick. Any broker that has institutional clients has VWAP algos that ensure that orders are filled at/below VWAP if it’s a buy order and at/above VWAP if it’s a sell order.

So let’s review what we’ve learned so far today:

It’s not exactly a huge revelation that we should pay attention to VWAP and learn when VWAP algos are driving the price. Or when they might awake from their slumber and are waiting to pounce.

How I started detecting them is I started thinking backwards. If I was charged with writing one, how would I do it? The first thing I would do is put a range cap on how much my buying or selling is affecting the price. And what would that look like on a chart? Lots of bars that have almost no wick and all about the same size. 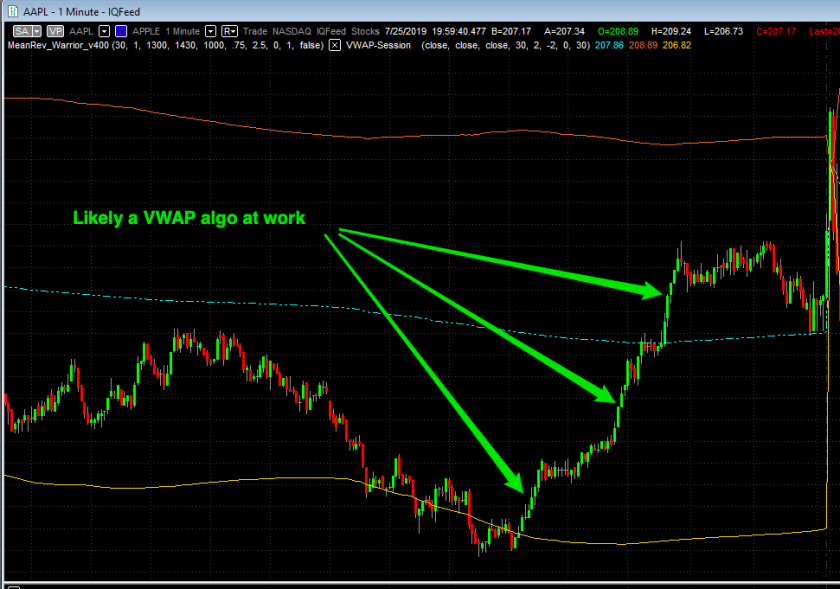 If you watch these in real time, you’ll see all of the buying and selling come in for a few seconds, move the price and then pause. On the next bar, you’ll see the same thing. Hint: think in terms of Renko bars.

For example, I would limit my buying/selling to not create more than .2% (just picking a #) or range within a 1 minute bar. Once my buying/selling moved the price by .2% in the current bar, I’d pause the campaign and start again on the next bar.

Why? Because it makes the response to my large buying/selling campaigns easier to manage. It’s a good litmus test of how the market is responding to my campaign (liquidity). Based on this, I can fine tune my campaign for buying/selling the entire position I’ve been charged with moving.

If I’m unloading a shit load of shares and it’s not moving the market as much (lots of liquidity), then I’m going to step up my campaign in the next bars and get better average price fills, especially if it’s on the side of VWAP that I want to be on. Below for buying, above for selling.

That’s the gist of how VWAP works. In reality how it works doesn’t matter much, what matters is that it’s going on all the time, learning to notice it and knowing when a campaign is likely to start. You can either be on the VWAP 787 Dreamliner with non-stop service to VWAP. Or get choked by the fumes of the VWAP Dreamliner when it’s going the opposite direction as us. 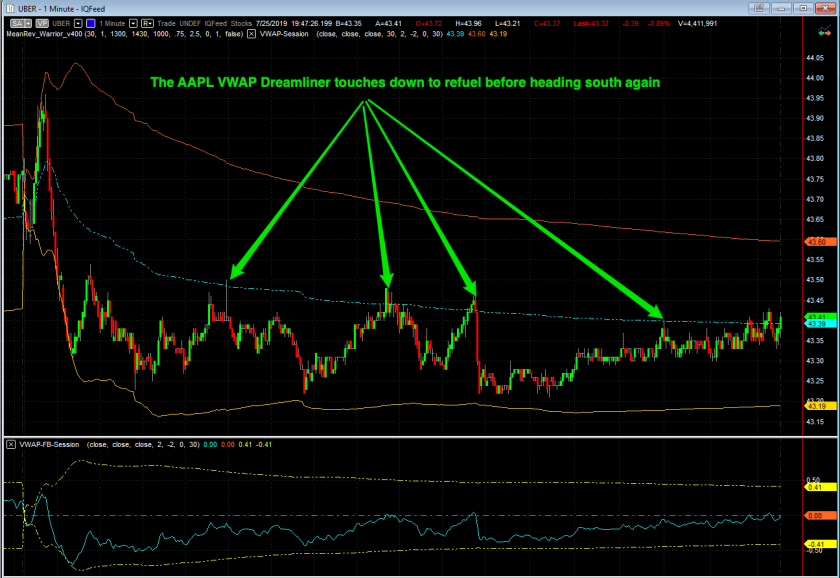 Option numbre tres is to be with the direction of the trend when the VWAP Dreamliner touches down at VWAP to refuel, reload the plane on snacks, champagne and air the farts out of the cabin before taking off again.

When the VWAP Dreamliner takes off again, we want to be on board in the direction of the trend. In AAPL’s case yesterday, it was a down trend day and bounces off VWAP were fruitful trades. Notice how in the first arrow touch of VWAP, AAPL is crushed with selling as soon as it touches VWAP.

Let’s look at some of my VWAP centric trades from yesterday, which will focus a lot around the airline stocks since they were en fuego. 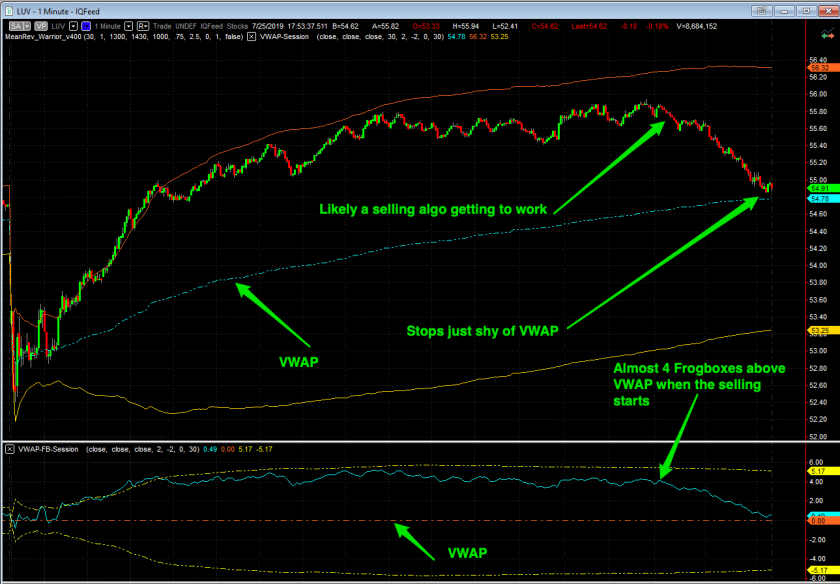 I had 4 trades in LUV yesterday it was a fruitful day in LUV, 3.2R net. If we start with the open, LUV opened with insane volume and we can see LUV deviating from VWAP right from the open only to touch down on VWAP for the aforementioned refueling several times in the first 30 minutes.

Then LUV took off on a long haul, high altitude flight putting 11.89 frogboxes of range on the board, which again is several galaxies from the mean of 2.3 frogboxes of intraday range.

However the real trade (that I missed!) was into the close. It would have been a nice 3R+ bagger. Notice after flying high all day, LUV touched down almost right at VWAP into the close. That was a smooth 4 frogbox descent into VWAP.

It’s not rocket science to trade with the trend. But trading with VWAP is the non-obvious skill that ALL day traders should develop. By all, I mean ALL. VWAP trading can often be counter trend and if you’re not skilled in this area, I highly recommend checking out Mole’s Price Action Master Class where he has a section devoted to it. 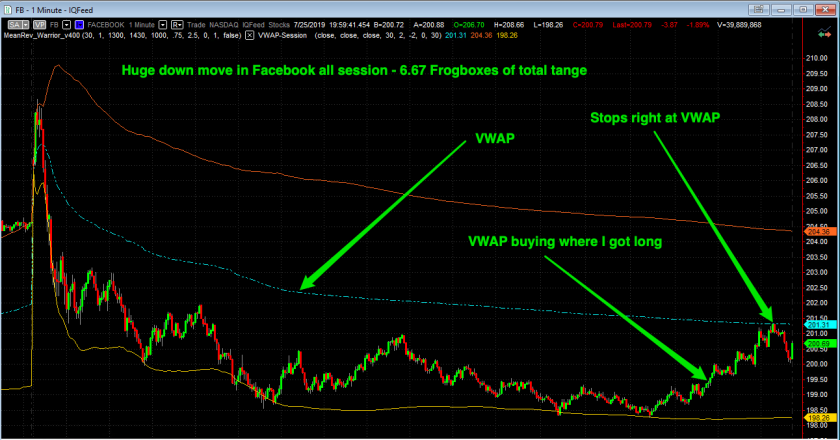 Another great example is FB, which was hammered yesterday right from the open, after delivering earnings Wednesday post close that supposedly exceeded expectations. It put an impressive 6.67 frogboxes of range on the board was an excellent short target up until about an hour before the close.

My VWAP buying spidey sense detection algos detected VWAP buying at work and I fortunately caught this one on the long side. The ascent into VWAP was a nice 1.5+ frogboxes which I closed out for 1.3R. Even though I’d been taking trades on the short side all day successfully prior to this. 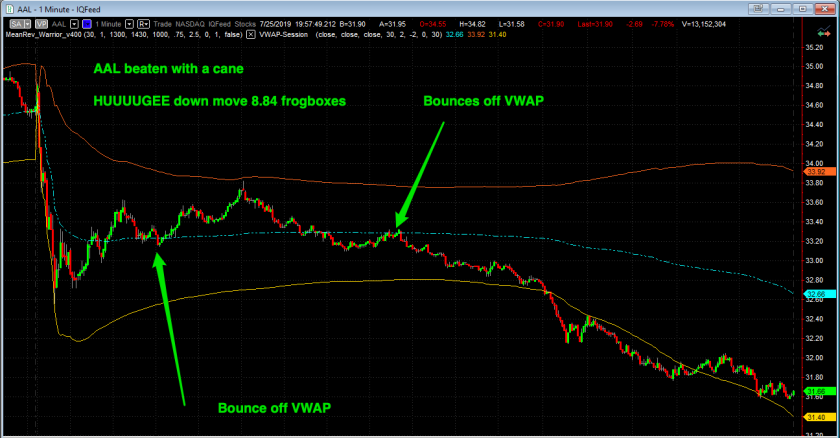 And finally we have AAL, which put 8.84 frogboxes of range on the board yesterday. AAL was all over the map, while LUV flew high, AAL was hammered in the afternoon. We can see how AAL struggled at VWAP. When there is no whale to push it over VWAP, that’s worth paying attention to. A lot of attention to. AAL got me, -2.0R on the session, both times because my stops were too tight for the level of volatility at play as it kicked up.

When something is flying at mach 3 and then comes to a profound halt at VWAP, we want to take notice.

That’s a wrap for today. I’ll probably be back next week while Mole continues his well engineered R&R campaign.