The End Of The Beginning

This may sound a bit strange coming from a born German (and now proud U.S. citizen) but I’m actually quite a fan of Sir Winston Churchill as I was always fascinated by his irreverent personality. He had a very interesting upbringing as a child due to a rather complicated relationship with his then renowned father. What’s most compelling however, and what stands in stark contrast to the so called political leaders of today, is how he actively sought out seemingly unsurmountable challenges and then faced them head-on and without compromise throughout his entire life. He is remembered by many timeless quotes but here is one of my favorites:

Now I started to feel a bit like Winston over the past year actually in that I continued to see the damocles sword of a significant market correction hanging over the market but everybody apparently was too busy chasing every higher bits to even remotely pay attention. BTFD has now become a household word and I am not saying this to criticize anyone as we’ve been using it very effectively over the past 9 years or so. Had we attempted to step in front of this fast moving speed train I wouldn’t be here writing about it and we’d both be taking turns scrubbing plates at the local MacDonald’s or Fatburger if we were lucky. 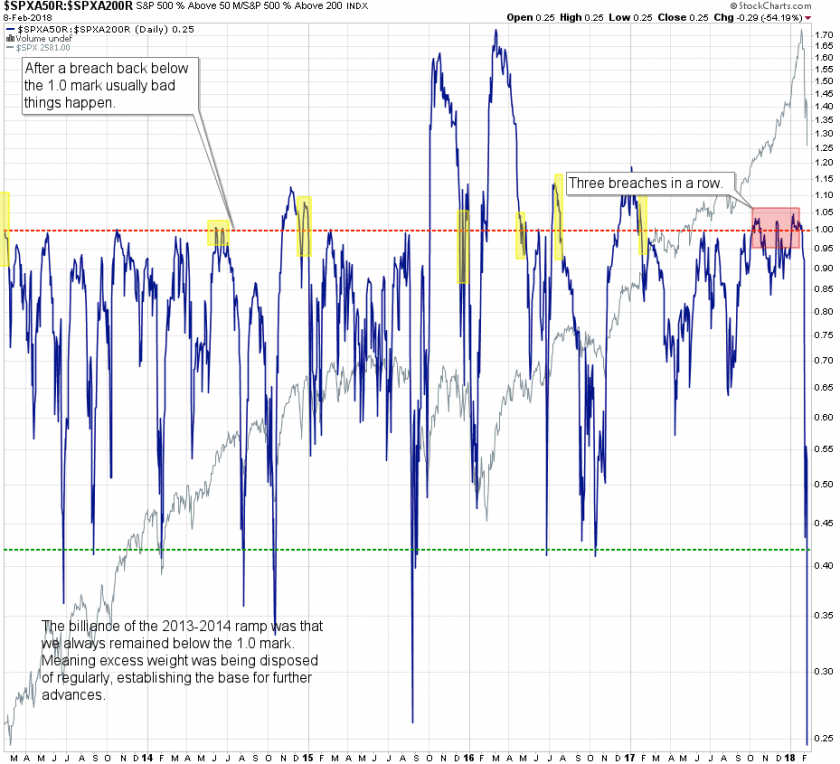 Before we’ll get to the part where I tell you what to expect next I ask you to humor me for a moment, as I want to be on record with some of the highlights that I posted out in the open and some of the ones I reserved for my intrepid subs. Number one would be market breadth expressed by the SPXA50 vs. the SPXA200, one of my all time favorite momo charts. Three breaches below the upper bearish threshold of at exactly 1.0 and no reaction whatsoever in price. Which, as I rightly pointed out on several occasions, was completely unprecedented and nothing good could come from it. 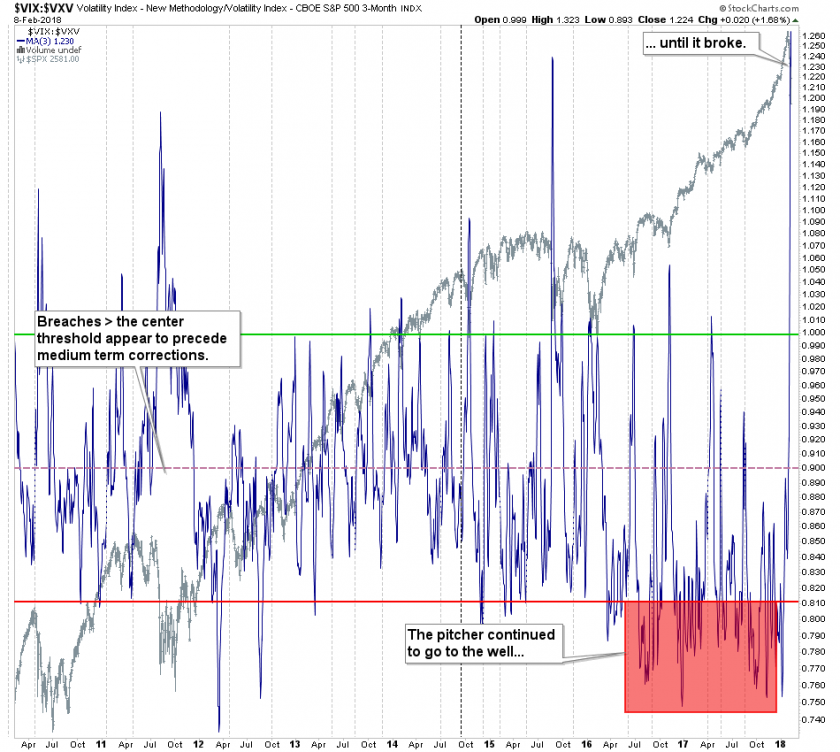 And I’m sure you guys recall my post where I equalled a year of record low VIX readings (shown above is the VIX term structure) to a pitcher continuing to go to the well… until of course it finally and most unceremoniously broke last week. 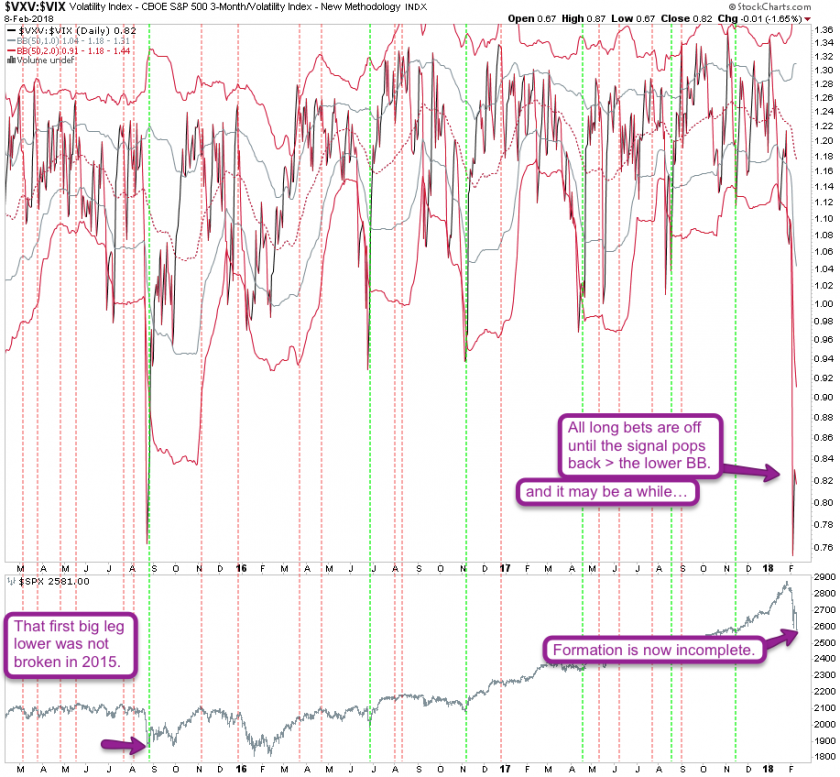 Here’s the same VXV:VIX ratio again but inverted and with a set of BBs we have much enjoyed using in order to pin reversal confirmations over the past few years. Well, good luck doing it this time as the signal is shot to hell and even outpaced the big spike in the VIX term structure we saw in 2015. And like back then it took quite a while until equities found their footing again.

But this time may even be worse as the first big leg lower in the SPX was re-challenged but not broken. The formation we are looking at now however is a completely different beast. We’ve got a much higher base in that the market was levitating without rhyme or reason exterminating any short interest in the process. 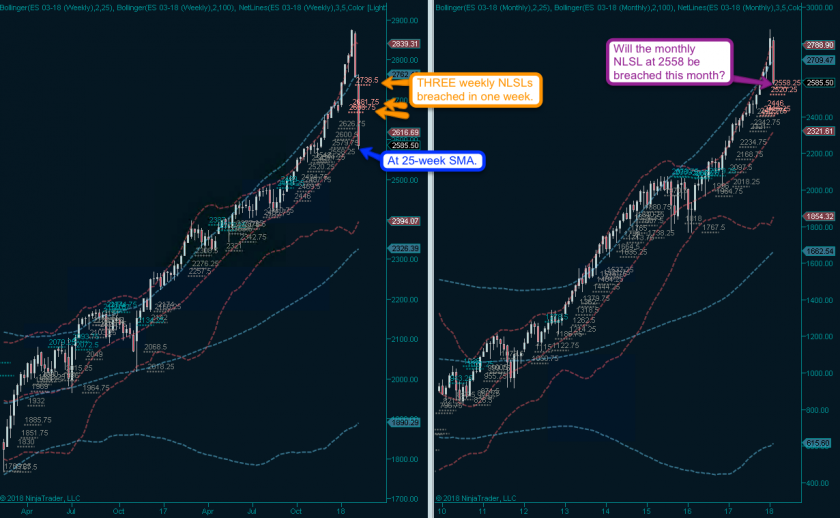 And of course all those years of excess now come at a price, which is that there are no support levels anywhere near us. Just because I’m drawing those fancy moving averages doesn’t mean equities are compelled to observe them. In regards to damage done we’ve got three breached weekly Net-Line Sell Levels and a touch of the 25-week SMA. The last one was in November 2016 and prices quickly rebound.

And a bounce better happen quickly as we are in danger of breaching a monthly NLSL at 2558. We already have three confirmed weekly Net-Line Sell signals and if that one gets taken out the SPX is taking the express elevator to the woodshed. Admittedly today is only the 9th and a lot can happen over the next 19 days. But that 25-week SMA is hugging recent price action pretty closely and thus a breach through would wipe out a trend line the bulls have enjoyed (and eventually completely abandoned) for over a year.

Which exactly is the problem when price pushes ahead without the benefit of recurring and cleansing mean reversion. Eventually there is a price to be paid and equity investors are paying it now. The most bullish scenario right now is that equities can hold the line, perhaps dip a little lower to scare the children, but then paint some type of spike low on that weekly.

But if we continue much further from here then we may get a fast and nasty bounce eventually BUT the technical long term damage will be felt for the remainder of this year and perhaps even this decade.

But we are not done just yet, please meet me below the fold…