The Horsemen Of Systemic Instability 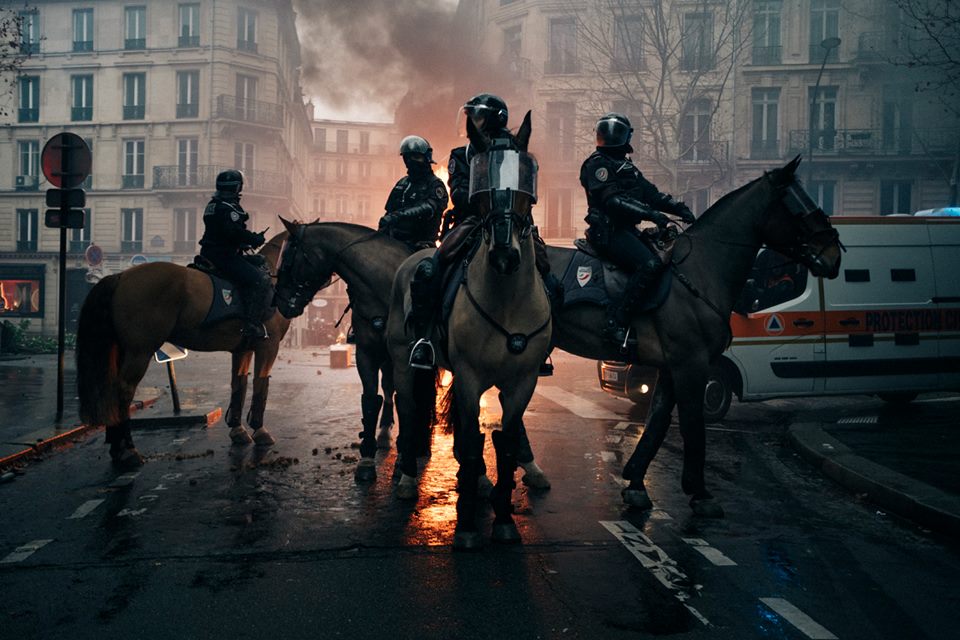 Fellow steelrat Evilisasevildoes just mused in the previous thread that the market was weird. I’m not sure if he’s referring to just this morning or if it’s a more general observation. If it’s the latter why should we be surprised? Although we pride ourselves of being primarily system traders trained to ignore the daily onslaught of neck hair rising clickbait we would be foolish to not recognize the fact that the political situation on both sides of the Atlantic is increasingly becoming unglued. And clearly over time constant systematic insecurity breeds market insecurity.

Which over the past few years has breathed massive volatility into the forex market. Pull up a daily chart of any of the four major horsemen (sorry snowflakes, horseperson sounds like crap), which in the given order are: EUR/USD, AUD/USD, USD/JPY, USD/GBP and you see what I mean.

Flash crashes followed by whipsaw galore. Now the forex market has always been known to be volatile, which is why retail traders love it, but what we’ve seen over the past few years combined is in a completely different league.

So yes, markets are weird and will continue to be weird as long as entrenched power structures in the West continue to ignore vast swaths of their populations and follow their own respective agendas. The past decade can be nicely summarized by just that – desperate attempts to keep the status quo in power whilst kicking the can further down the line.

Quite frankly I’m surprised things did not already come to a point a long time ago. And a polarized populace who increasingly feels unrepresented not surprisingly is rapidly shifting from the center of the Overton window towards the fat tails.

And with that comes increasing risk of conflict, violence, and in some instances perhaps civil war. Market participants frankly cannot be blamed for becoming worried when being faced with doomsday scenarios on a daily basis. The combined result of this has been heightened volatility throughout 2018, which apparently is going to extend far into 2019 – and perhaps beyond. 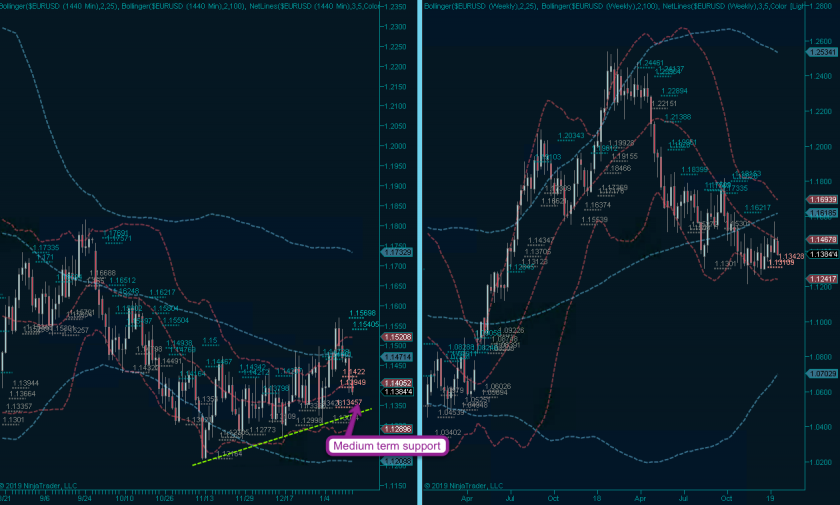 The medium term panel on the EUR/USD is a great example of why great setups fail in highly volatile sideways markets. If you consider the recent spike high which looked like it was to merely descend lower for a ‘last kiss goodbye’ of the 100-day SMA – but then sliced through it like butter and continues to drop.

This type of discretionary setup is one of the highest probability trades I know and it works well over 75% of the time. You all should know as I post these setups on a recurring basis. I do it because they work well and have the side benefit of producing large outlier short (and long) squeezes.

When setups like these start to increasingly fail (like they did in 2018 – thus leading me into becoming more stringent when picking setups) then that is highly reflective of market sentiment as it is expressed in more realized volatility. 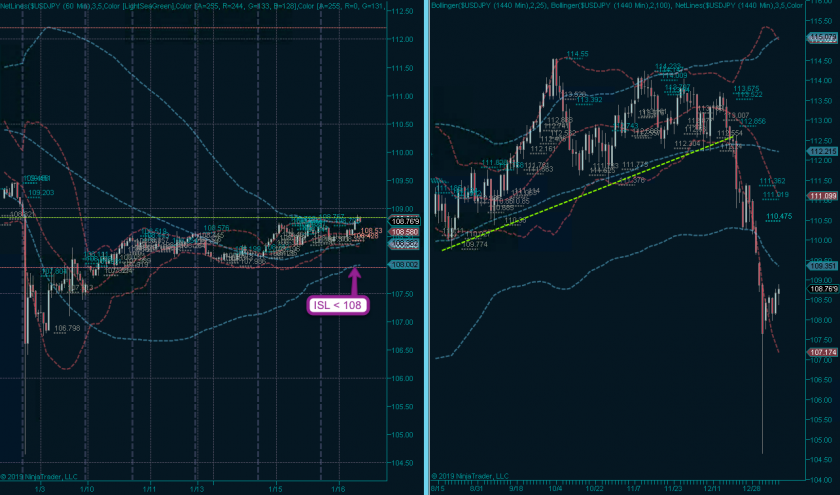 Having to become more stringent when it comes to setups is frustrating, especially if one just so happens to run a trading blog catering to trigger happy retail traders demanding their pint of blood on a regular basis 😉

So here’s one I do feel good about, mainly because it looks so very scary. The daily does not look like a reasonable long setup which is why I don’t expect many people to go long here. And admittedly the odds are 50/50 at best.

BUT if you look at that pinched BB on the hourly you’ll realize that the USD/JPY has rapidly shifted from a highly volatile state to a more normalized one, which has caused the hourly Bollinger to become very pinched.

So fireworks are to be expected and I want in. Price is about to breach that upper BB and I’m in the annoying habit of following the easy direction of price. So long it is with a stop < 108. If it fails – no hay problema – because the spike low that follows will be one sweet entry opportunity, albeit not guaranteed (see EUR/USD above). 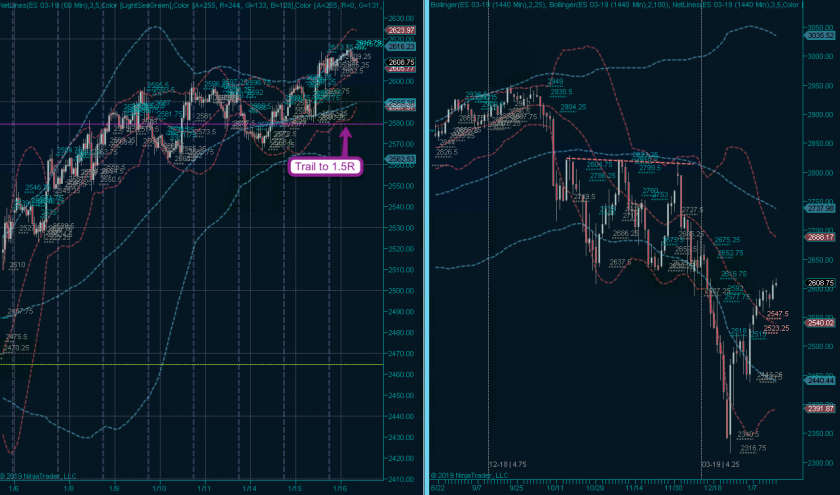 Slow going on the equities side and 1.5R locked in at this point – expecting more if this thing deigns to finally get out of the gate. NOT that a slow advance is a bad thing – quite to the contrary. 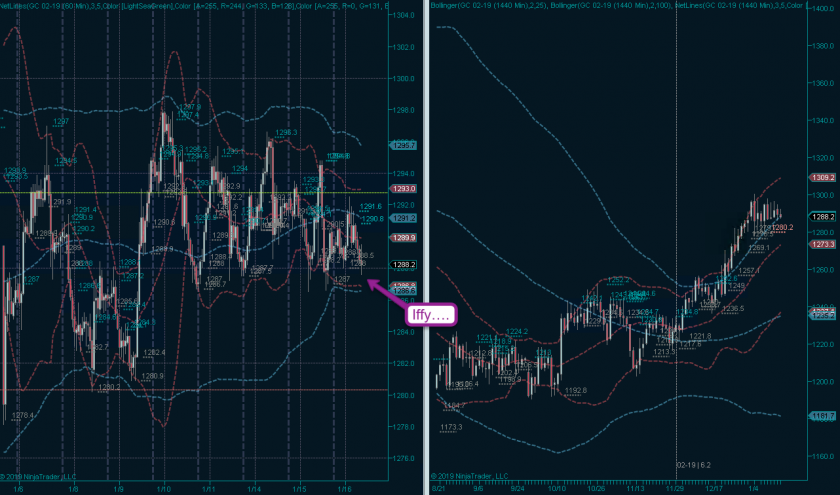 Update on the gold campaign – meh! Dollar is back on the rise and it seems that the only thing driving PMs these days is the Dollar. May as well just play the USD/JPY directly. Oh right – we are 😉 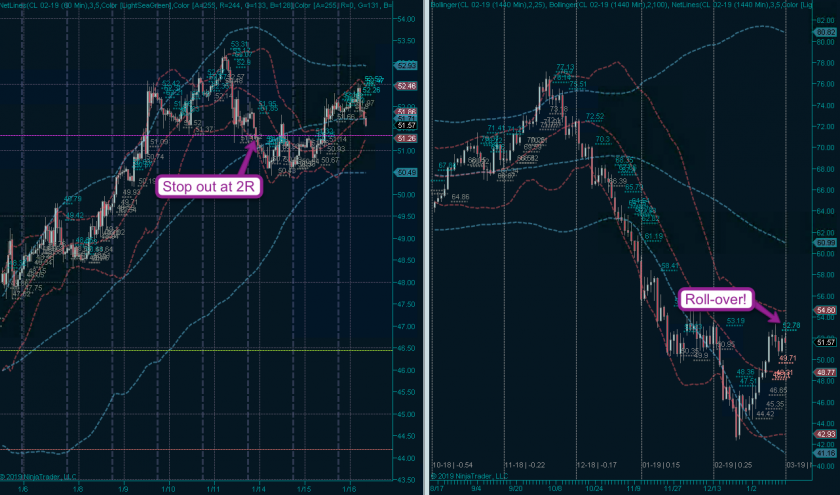 My crude campaign was stopped out last week at 2R, not sure if I posted this. Good for you if you’re still holding this, but it’s time to roll it into March. Crude is annoying like that and forces us to roll every single month.

That’s all for now. Have fun but keep it frosty.