The Wheels Are Coming Off 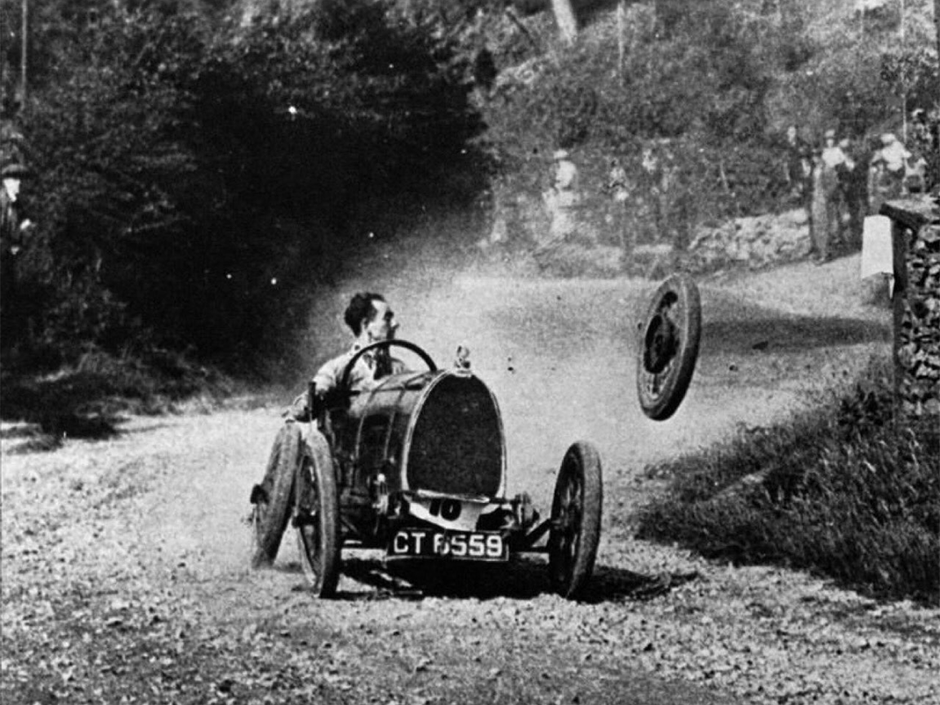 If you seek to plot a way out of a particular conundrum you may have found yourself in it’s always advisable to take a step back and figure out what got you into that pickle in the first place. However if one would attempt to take stock of the sheer number of misguided and short sighted policy decisions taken over the course of the past decade across the board I fear it would probably end up filling a volume as thick as Tolstoy’s War And Peace. So the real question we may need to ask ourselves is why the heck things haven’t blown up in our faces already many years ago. 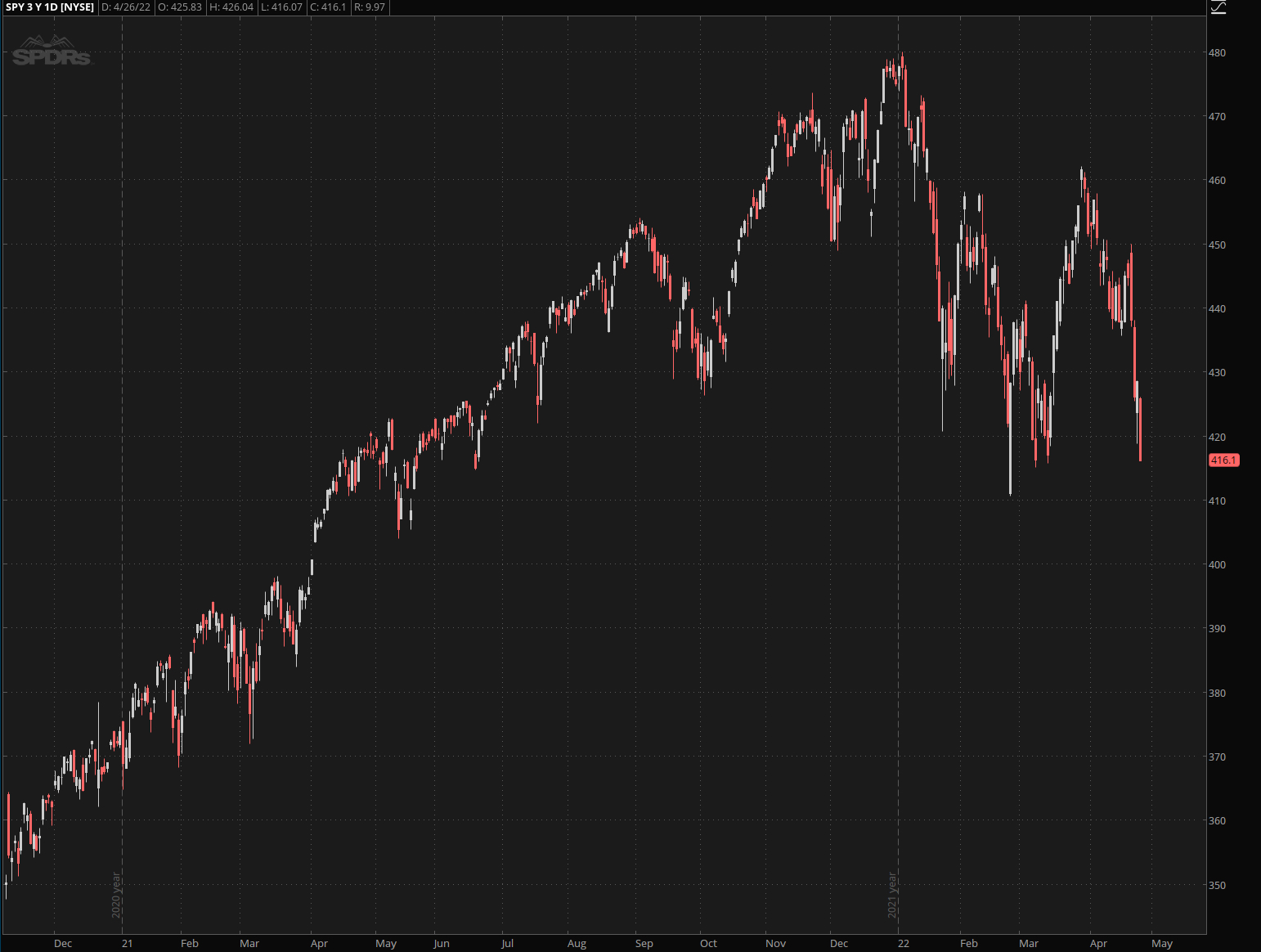 To that end I frankly have no simple answer beside the time tested market truism that it never pays to fight the Fed. Which, much to the chagrin of many followers of Austrian economics, turned out to be a painful and expensive lesson to be swallowed.

However if there is one thing we all learned during the events of the past three years is that attempting to tear down every single pillar of society and modern economics will in the end result in the entire edifice to come crashing down. It may take a long time until gravity finally makes itself felt, but once it does it is difficult to escape it. 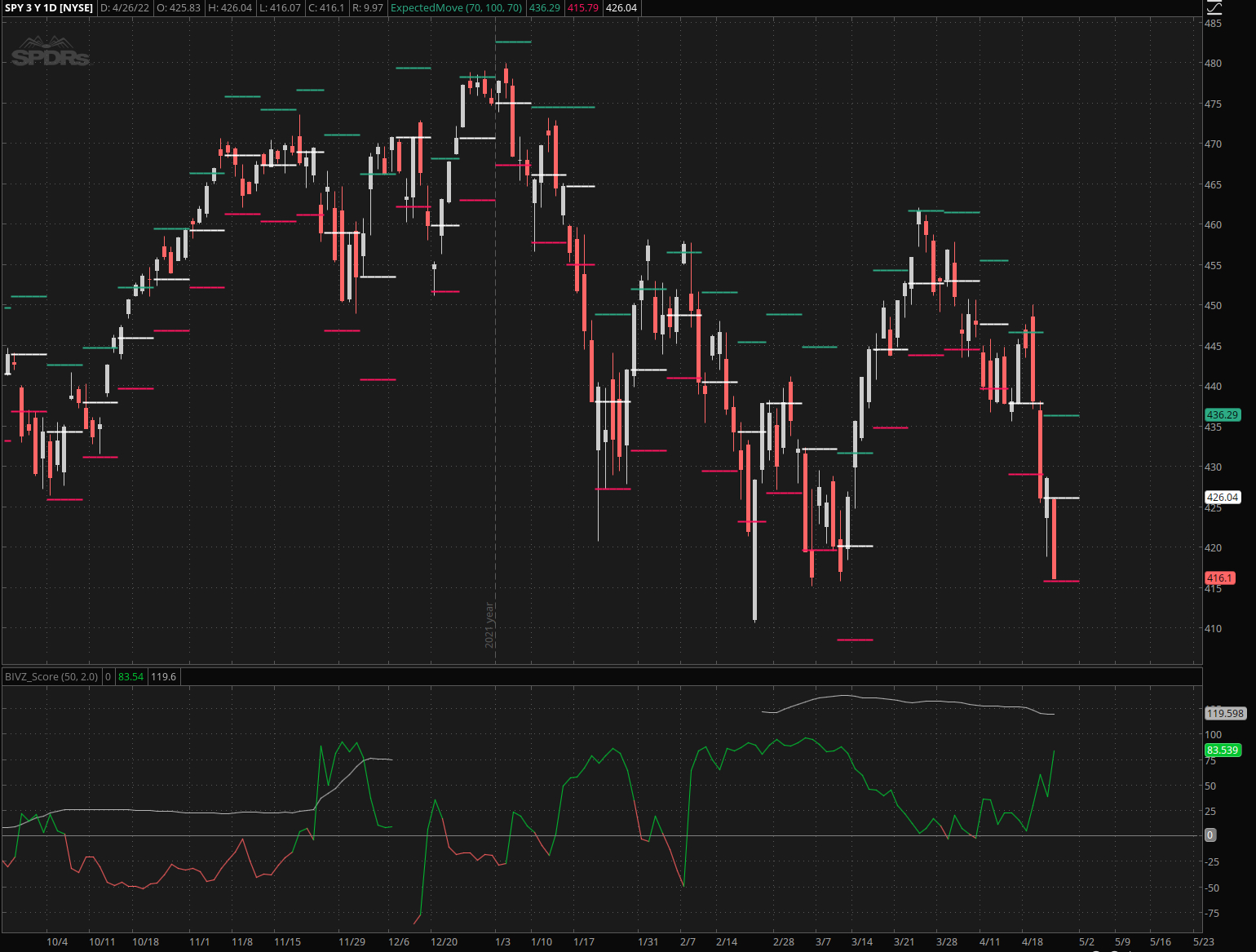 Which is the very threat we seem to be facing right now, and by that I mean this week or the next. Technically speaking a breach through SPY 415 would result in massive gamma risk to be unleashed, which in turn would lead to more short selling in order to cover the short end of a boat load of OTM puts.

Which in turn most likely leads us to 410 and that’s the last hurdle before the 4k mark is being taken to the woodshed. Most likely there will be violent swings to the upside – as is customary during early stage bear markets. I personally would consider them bonafide short sell opportunities. 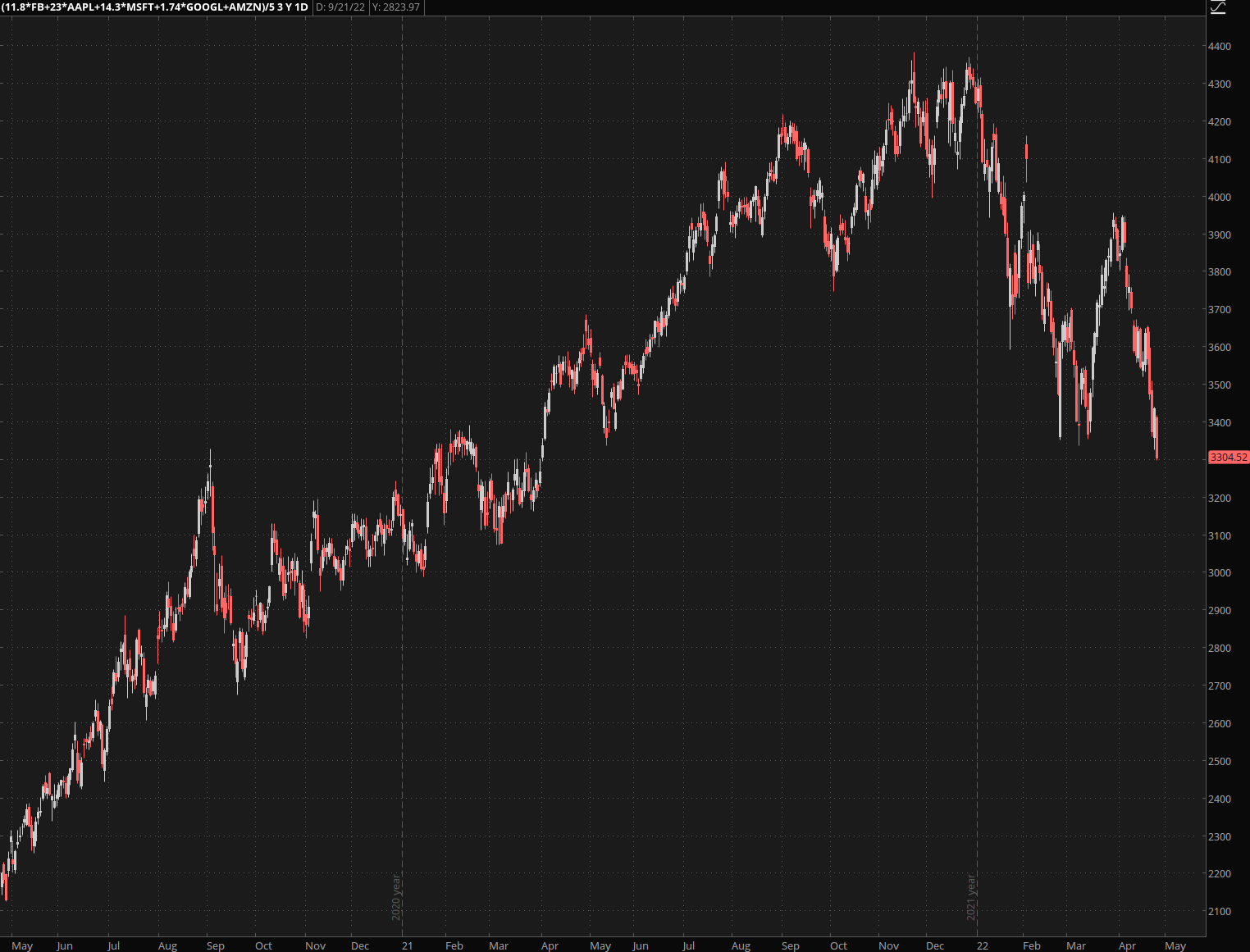 Not surprisingly big tech is effectively in a free fall situation leading the entire sector downward. It’s one thing having to deal with rising interest rates, but if you throw in chronic supply chain disruptions, exploding costs, a weakening of the Dollar (don’t let the DXY deceive you), and the prospect of WW3 then it’s easy to understand how investors may be looking elsewhere for possible safe havens. 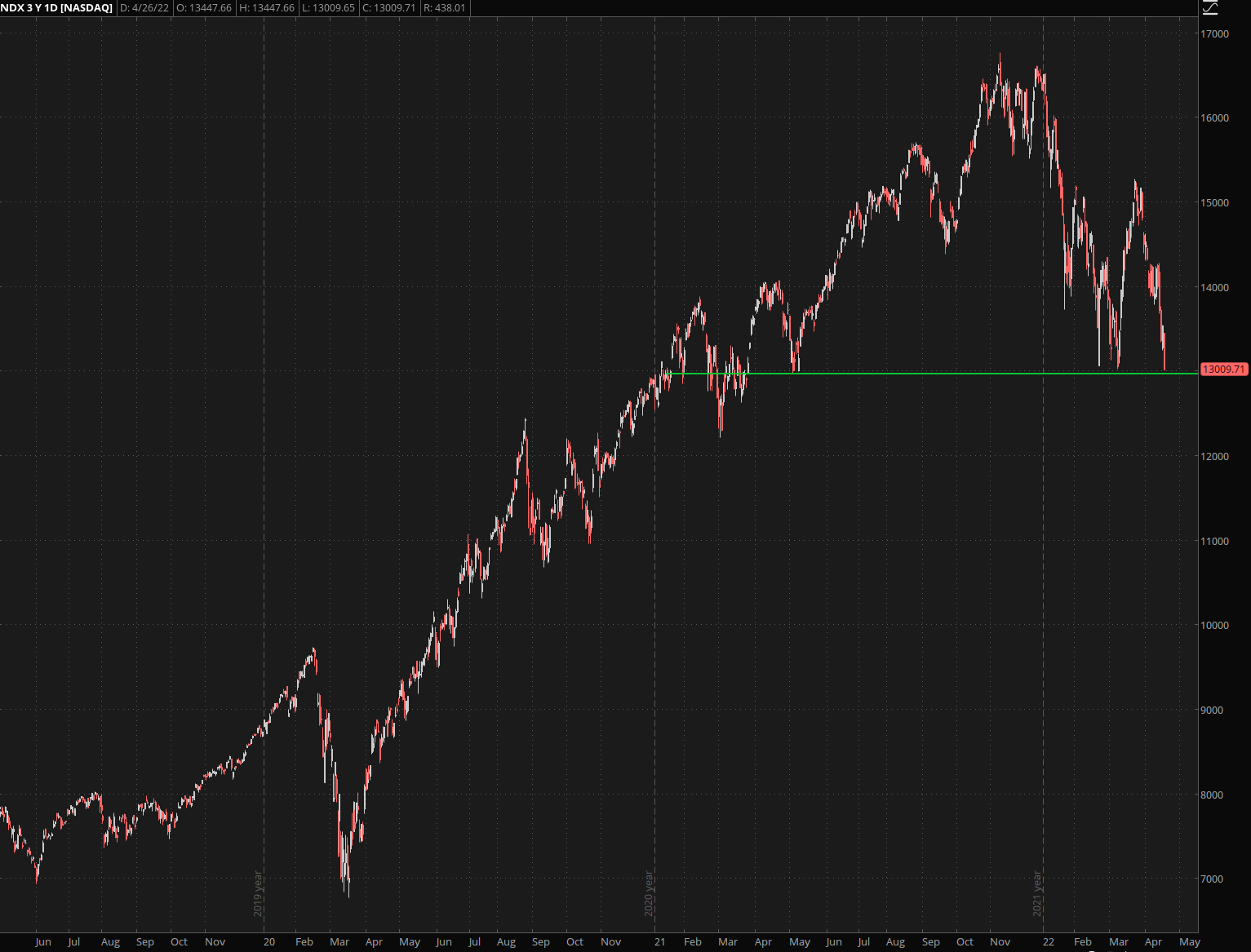 The NDX in fact has now descended to the LT support line I drew many months ago. Consider it the proverbial canary in the coal mine as a drop < 13,000 could quickly and easily get us to 12,000 or below. 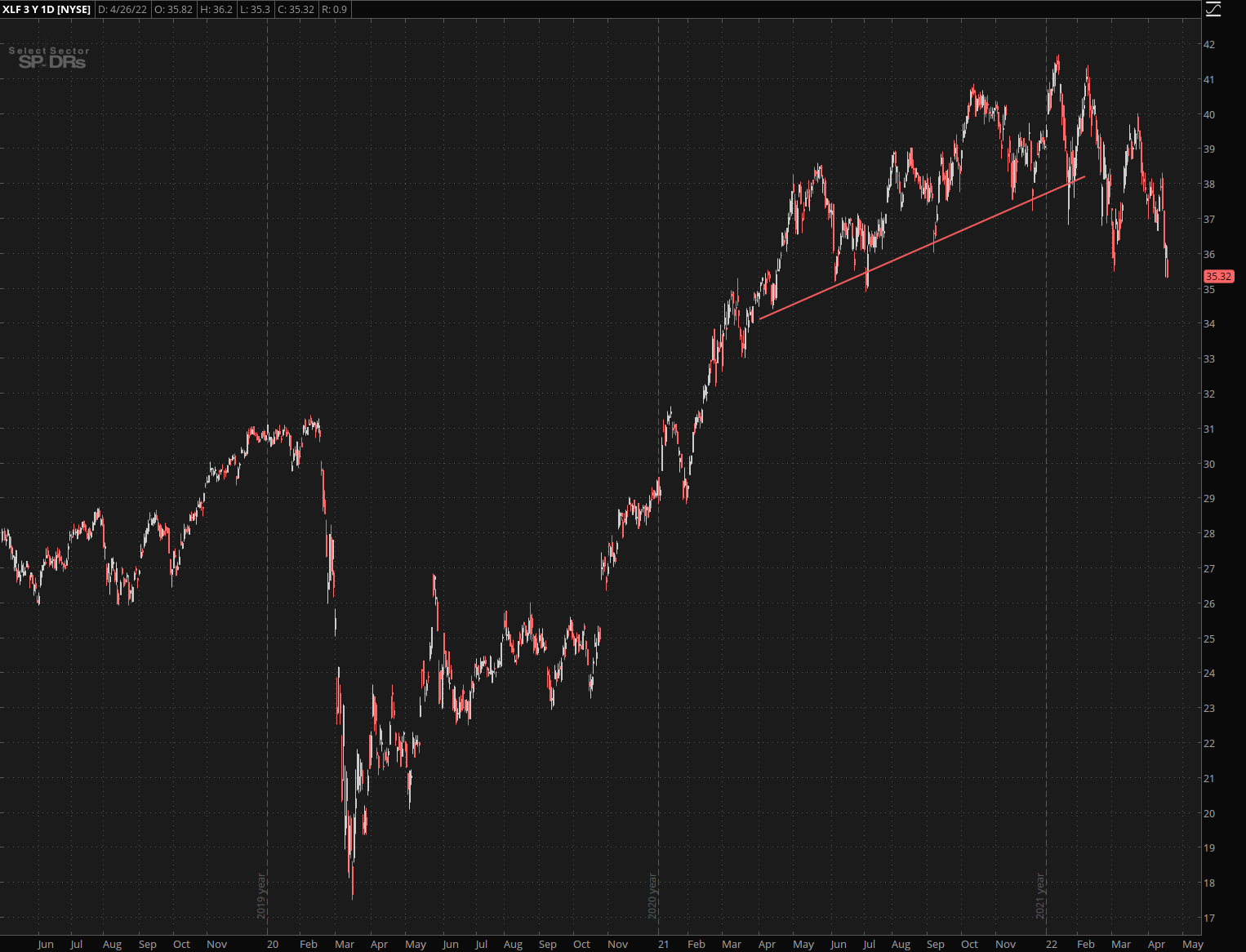 Higher interest rates do not seem to be aiding the unfolding train wreck in finance as the formation produced over the past three months is probably as bearish as they come. Of course a bullish resolution at this stage is a possibility, but ask yourself what is its probability. 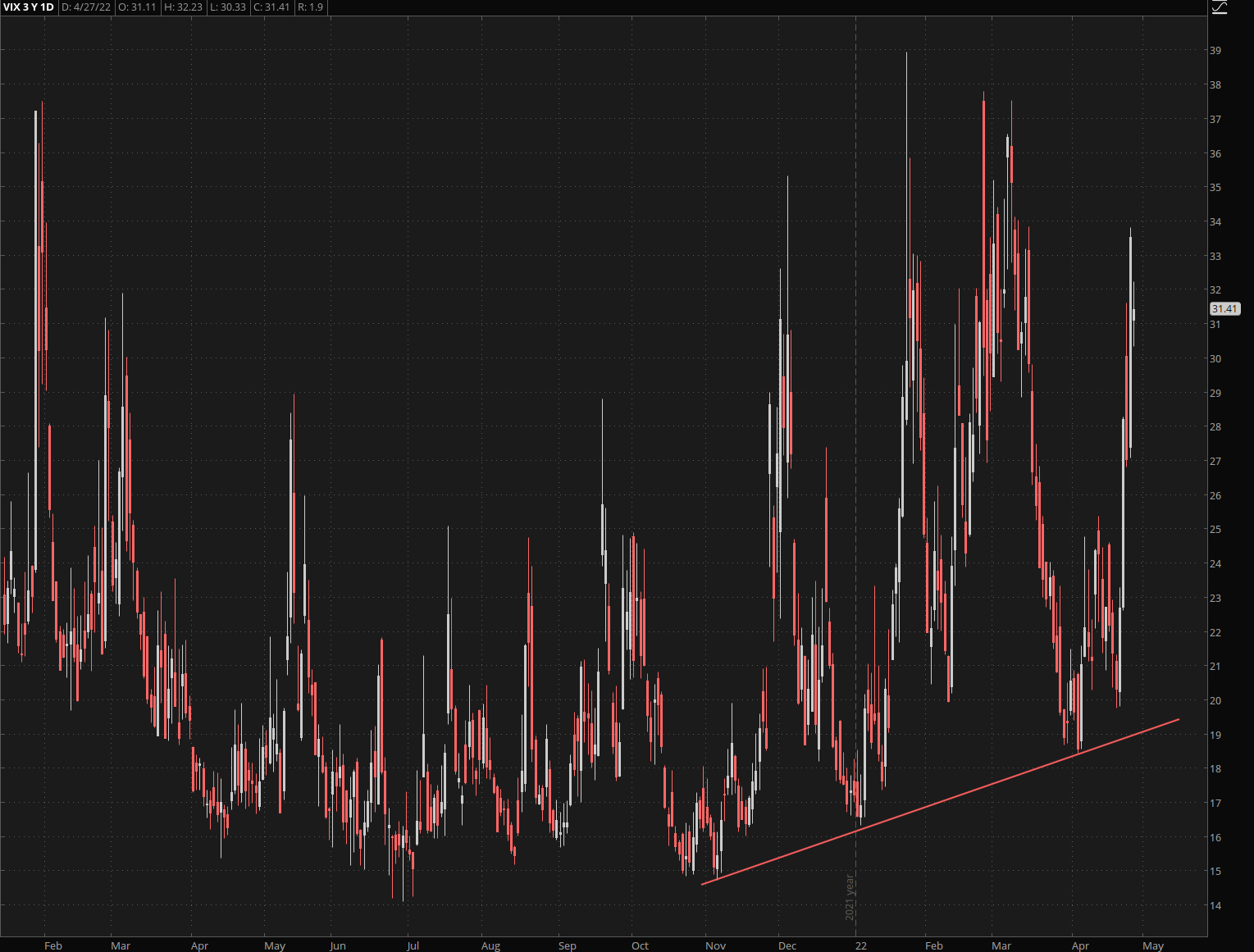 Remember when I suggested that the rising baseline on my VIX chart would remain unchallenged? In fact it was not even being touched and the new top of our baseline now extends all the way into 20. No matter what transpires over the course of the next week understand that an increase in implied volatility over the course of six months usually results in more ugliness ahead. 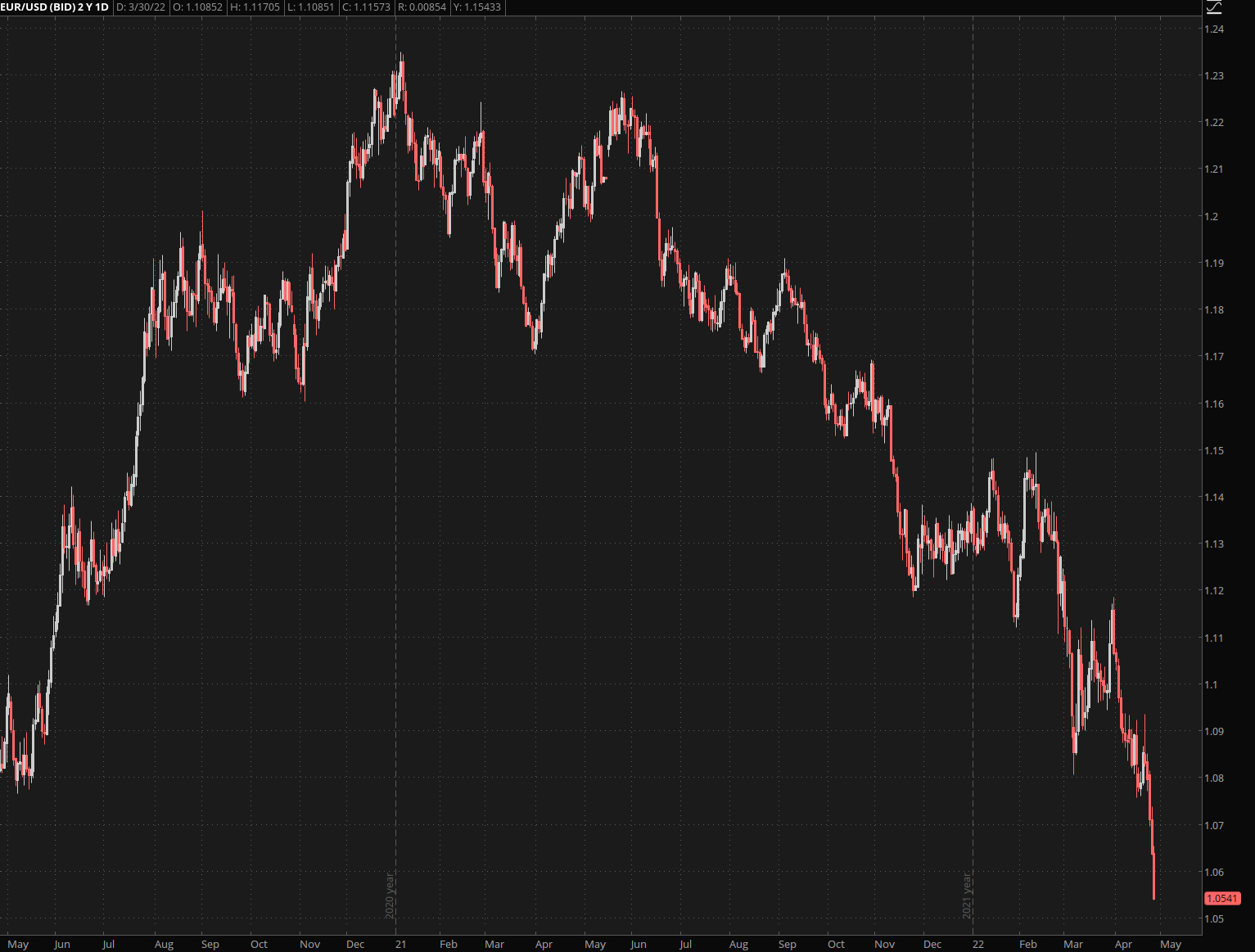 I complained about the Dollar but if you want to see a currency on a crash course look no further than the Ruble, which is literally falling off the plate proving that ….

Oh…. hang on a second. That’s not the Russian Ruble, actually it’s the EUR which is now heading toward par on the Dollar. Honestly that’s a complete mystery to me. Who could have guessed that permanently and irrevocably cutting off 45% of Europe’s natgas supply as well as a good chunk of the continent’s crude and coal supplies would result in exploding heating and food costs across the board? But hey, maybe it’s just ‘transitory’ 😉

Words to the wise: Hedges are expensive and my current CYA spread in the Spiders is still in the negative. But I sleep soundly at night knowing that a full blown market crash would offset any losses incurred and then some.