Equities have been whipsawing near our inflection point at 1982 which led me to lose 1/2 R twice (one short and one long) and it looks like my third short entry is about to meet its maker at any moment. Looking at equities across the board the odds seem to support a continuation higher but this is where I have to draw the line. 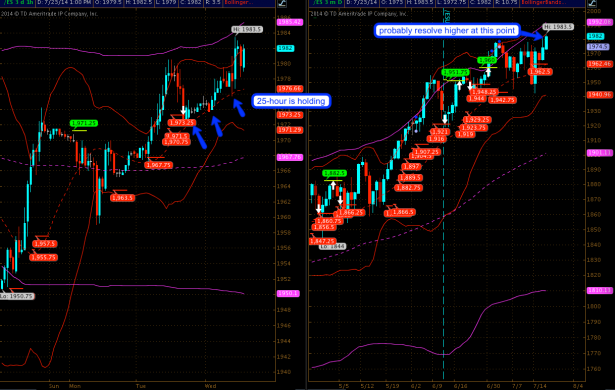 Three trades per campaign is my maximum no matter what. Either way this one swings it’s going to be annoying as I did not have any directional bias and thus attempted to get positioned near inflection points. But as I internalized my emotional response today I realized that this was exactly when I needed to step back and follow what I preach – not let my emotions get in the way of trading. Fact is that right now I don’t see a good entry here and let’s be clear: the worst thing one can get drawn into are revenge trades or attempting to chase a big move. 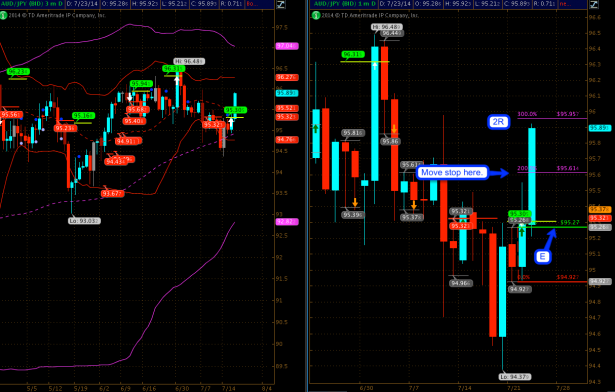 Fortunately however my AUD/JPY campaign has made up for some of the damage on the equities side and then some – plus it may have legs. Nice breach there yesterday and today it managed to climb just a few pips short of the 2R mark. I’ll be putting my stop at 1R now and now we see if we got a runner here.

By the way, this goes to show that it doesn’t make sense to fall prey to one-ities (a.k.a. an obsession) for a particular symbol. I’ve said it before and I’ll say it again – I don’t HAVE to trade equities just because it’s on everyone’s radar all the time. As a matter of fact if it wasn’t for the blog I would probably only look it once or twice a week. The forex side is actually where most of the action is these days which is why I have been trying to get more of you retail rats up to speed. More on that in the coming soon – I actually have an exciting announcement planned for next week.

You have been briefed – now have fun but keep it frosty. See you guys later tomorrow.