My ongoing campaigns managed to survive the weekend intact – and as they are all longs – seem ready to bust higher. Otherwise I don’t see much of interest today. A scan across my charting universe yields either fully trending or stagnating symbols, not much in between. Thus a great day sit and watch whilst waiting further instructions. 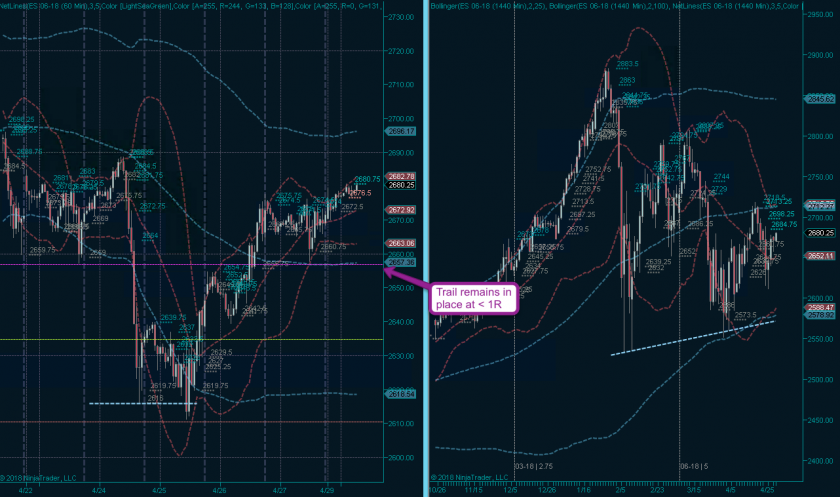 A very fortuitous entry has now bestowed me (and hopefully you as well) with about 1.8R in MFE. However I decided to trail very conservatively as the pace of the advance is decreasing, thus opening the door for a little shake out back down to the 100-hour SMA.

Not much else to say here that I haven’t already reported last week. What the bulls ought to be doing here is to take advantage of temporary weakness and thus squeeze as hard as possible to trigger as much short covering as possible.

Don’t get me wrong a low volatility advance has merit and can lead to bears being slow cooked in their own juices. But as with everything in life context is everything and in the current situation the bulls frankly do not have that luxury. They have appeared very weak over the past month and a show of strength is long overdue. 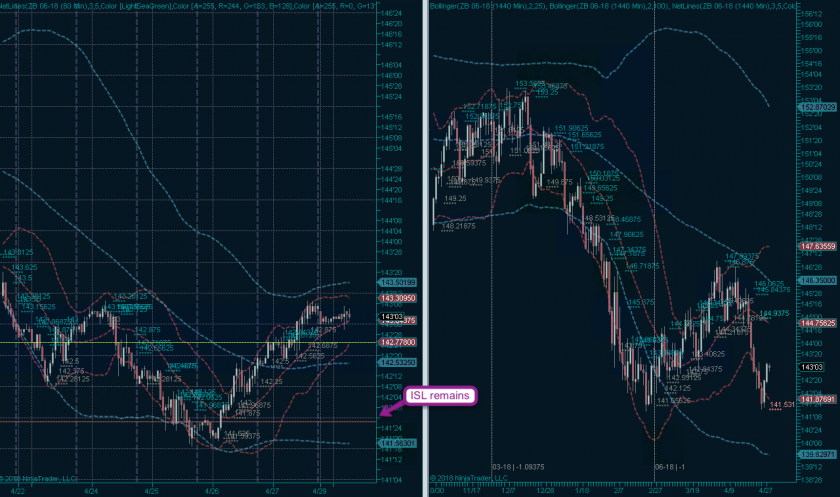 The ZB campaign is still looking solid but has not yet kicked into break-out mode. Of course it’s still early days and a lot could happen here. For one we have not seen a retest of the 100-hour SMA, which happens quite a bit ahead of a punch higher. I think I have allowed for enough room to sit that one out, so let’s see what happens here over the coming days. 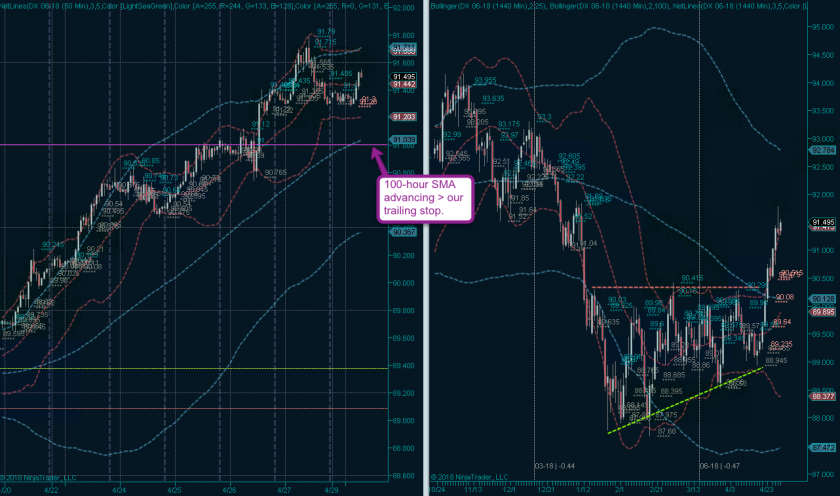 The Dollar continues to squeeze higher and at least thus far what I’m seeing in the major crosses (i.e. EUR/GBP/JPY/AUD/CAD) looks supportive of continuation. I have not touched last week’s trail as the 100-hour SMA is now advancing > our trailing stop.

As I mentioned previously – I’ve got big plans for this one and my target range is near the 92.75 mark. The recent drop in the EUR/USD has been helping my exchange rate of course but it’s still at 1.21 and thus miles away from the 1.05 I enjoyed just before Trump was sworn in.

That’s not a swat at our president and I do understand why he would want a weaker Dollar in context of his ambitions of restoring American manufacturing to its former glory. But in general I am categorically opposed to weakening one’s currency in exchange for more competitive exports.

With the U.S. Dollar already being a mere shadow of it’s former self it is now increasingly being challenged as the world’s reserve currency. Just recently China launched a new RMB based crude futures contract, which could quickly establish itself as an Asian benchmark.

Having achieved relative energy independence over the past few years the U.S. clearly cares less about the middle East these days and the dynamics of the Petro Dollar are now changing. But at the same time its monetary policies very much are dependent on enjoying reserve currency status and thus a consistently falling Dollar will not be as easily defendable as it perhaps used to be until about a decade ago.

In other words, be careful what you wish for. Because you may just get it.

Okay I managed to find one promising looking entry but will have to keep it for my intrepid subs. But it’s a good one and hopefully will work out as well as the last time we took it. If you’re not a sub then now is a good time to join the team!