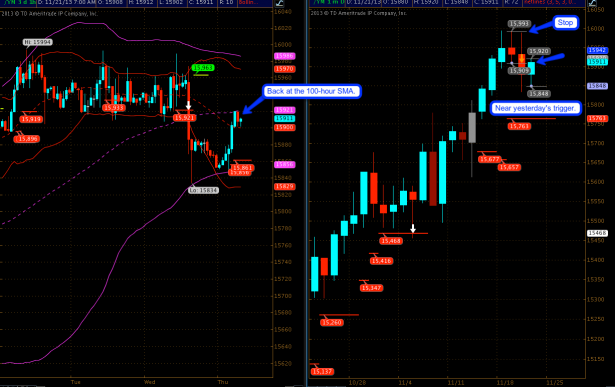 Last night I sent out an email to all previous and existing subscribers as I wanted to get a sense as to how active everyone is and how things have evolved over the years. Little prepared was I for the flood of rather elaborate and sometimes heart warming responses that kept pouring in. Something that really caught me off guard was the number of messages that mentioned the death of one or more loved ones in the family. Rather humbling and it reinforces my personal prime directive which is to enjoy every and each day as if it was my last one. Yes, I admit – I would probably not spend it posting on a blog but you get my drift. Anyway, after about 200 personal responses I gave up and resorted to sending a summary of some of the most salient themes I came across. I’ll post what I sent out to everyone below but let’s first do a quick update on our YM setup.

As you can see we’re back at the 100-hour SMA and I’m actually quite jazzed about that as we may get an RTV-S setup this week, which would allow me to add more positions. Either that or I’ll get stopped out (see stop on the right panel) but that’s life as a trader – no guarantees and you can only focus on what you can control. Which is your risk, your entries, your exits, and your campaign and money management. Everything else is just noise and wishful thinking. So my stop stands on the daily but short term this morning I’m tempted to add a small short position here near the 100-hour and see if she holds – so if you follow me into the abyss put a stop on the other side of that 100-hour and perhaps sacrifice a breakfast burrito** to the dark Lord of the Market and we may get our way.

UPDATE 8:25am: Yeah, the stop on my ST trade was hit and it seems we’re pushing higher. Which is the risk we take when we take trades against the ongoing trend. As mentioned, my stop on the daily YM campaign remains in place but as we are now above the 100-hour I think the odds for a successful conclusion of this short trade have been reduced.

Alright – here is part of the response I just sent out to all my subs:

1) Quite a few of you are still active but are not necessarily trading futures and/or forex. That’s understandable but please understand that Mole the trader has to focus on not only what works for a wider audience but also what offers a the lowest risk to benefit ratio. And in my mind the futures and forex markets are by far much easier to trade than stocks and options these days. I do cover equities of course as it’s a financial blogger’s ‘bread and butter’ so to say – it also drives in new eyeballs. But from a trading perspective it’s been the futures and forex side that has banked us the most coin.

2) Some of you don’t intend to trade for a living and are simply managing your own assets or that of your family. Your focus is on minimizing losses and slow/steady low risk growth on a long term basis. Completely understood and I hope that the long term perspectives I post on a regular basis are falling on fertile ground. However from a financial blogging perspective there is only so much to offer on that end. And I doubt anyone would want to pay me a monthly subscription if I only posted three times a month – hey I would love it 😉

3) Many of you wanted to see more frequent updates on the Zero indicator side. I actually remember doing Zero updates intra-day but then was accused by some of playing shill for my wares. On the other side I must concede that I have not been promoting the Zero very much and perhaps I should once again put together those EOD wrap up videos. I remember them being very popular. Or would you rather see me post a Zero chart and some comments on the blog during the session? Remember, there are only so many hours in the day and I my hands are pretty full as it is – so I would like to see more input on that end.

4) Quite a few were beta testing CrazyIvan during the trial and were overwhelmed by the flood of emails. Frankly speaking I would agree and I am actually not sure I’ll keep offering the 30-min as a subscription product as it’s way too busy unless you are an extremely active trader. If you are subscribed – no worries as it will keep running, but I may remove it from the sign up page. The 480 is a lot easier to handle in terms of the number of emails per day and trades to be executed. CrazyIvan for gold is still in beta (i.e. free), so if you want to get an idea of how the alerts work then I suggest you sign up for a month.

5) Some have written me that they enjoy my work (and irreverent humor) but just don’t have the time (or profess to be too lazy) to follow along or to learn any of the systems. Well, on that end there’s really not much I can offer as it takes years of hard work and dedication to become a successful trader. I really wish I could dumb it down to the point where you simply get an alert and execute a trade withouth having to think. Oh wait – that’s exactly what we’ve done with CrazyIvan! 😉 Of course I concede that CI just got started plus it just went through a draw down period. Let’s be frank – it’s been running only for slightly over three months now and it obviously still has to prove itself. If you are one of the people who are too busy for discretionary trading then I suggest you just drop by every month or so and check the stats. Perhaps in a few months you start seeing the value as we accrue a longer term (and hopefully positive) track record.

6) MORE tutorials was a resounding theme. Yes, I actually hear that a lot and I get it. Maybe one thing I should do is to put up a list of favorite posts – there actually is one in the Evil page but it’s not very prominent. So perhaps that’s a good first step. Last week I also attempted to guide you guys through the E-Mini long setup – where to get in – when to move your stop and why – when to exit. Obviously I can’t do that for every single setup but I’ll do my best to offer more on that end. Quite frankly I have received zero pertinent input and perhaps it would help me if you guys would speak up a lot more. If only see tumble weeds or the usual suspects in the comment section then I must assume that nobody played along. Which is frustrating as we’ve actually caught the swings rather well recently.

I think that would be the gist of it – something that frankly surprised me was the resounding positive sentiment I received across the board. Although many offered constructive criticism not a single response was negative or rude and it seems that almost all of you continue to find value in my insane ramblings. Go figure!! 😉