I can’t believe tomorrow is Thursday already – but here we are! Not that I am complaining – I live for this stuff! As I’m pressed for time tonight I will excel in brevity when painting tomorrow’s road map. As the current situation is however a text book example of how wishful thinking can influence one’s wave count I am taking the time to make a point about the incessant hunt for the rarest of species among Elliott wave counts: 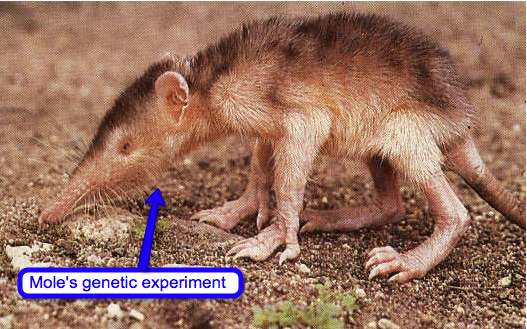 Isn’t it cute? Amazing what that gene splicing kit I got for my birthday is capable of. Next: A legion of genetically enhanced mutant stainless steel rats I plan to let loose on the ES futures pit.
[amprotect=nonmember] Updated wave count and commentary below for anyone donning a secret decoder ring. The rest of you guys will have to wait until tomorrow – sorry. If you are interested in becoming a Gold member then don’t waste time and sign up here. And if you are a Zero subscriber it includes access to all Gold posts, so you actually get double the bang for your buck.
[/amprotect] [amprotect=1,9,5,2] 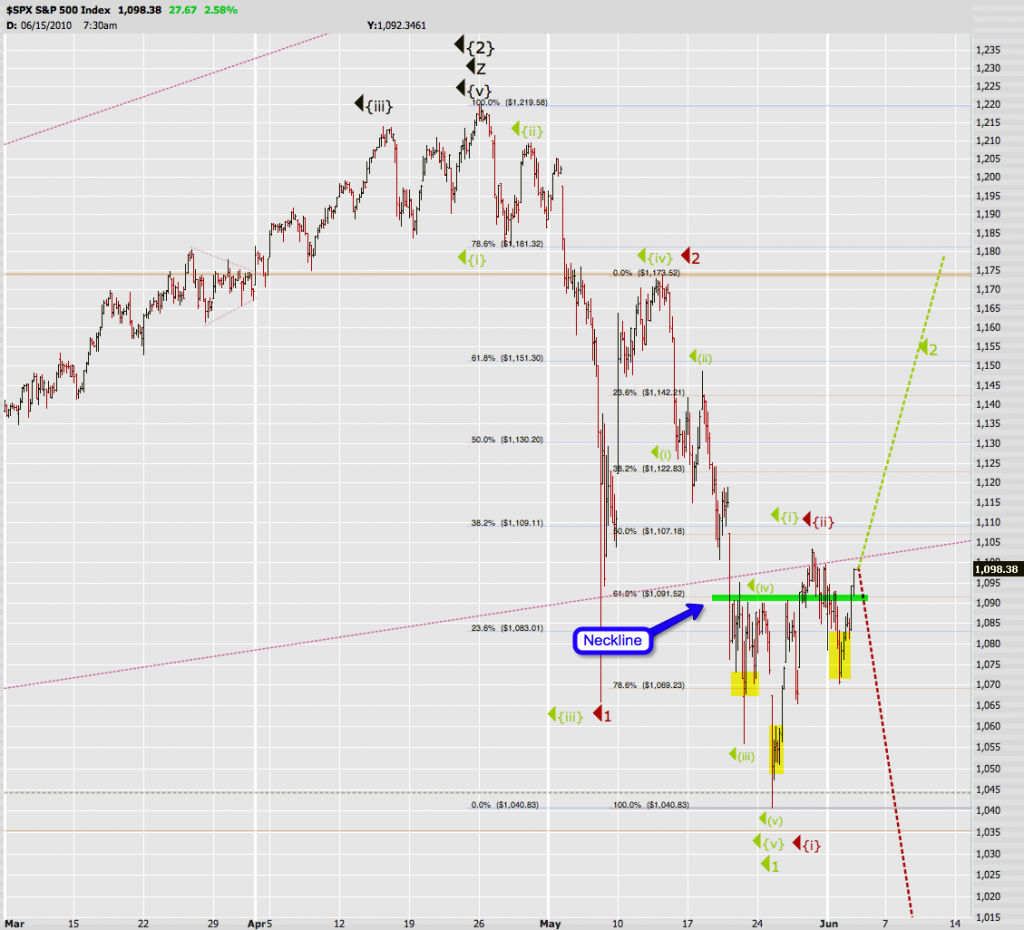 The wave count potentials have not changed and I won’t repeat myself tonight – until 1103.52 has been breached Soylent Red remains a possibility. I have also pointed out the genetically modified H&S pattern – it’s not exactly perfect and admittedly we won’t know until tomorrow if we get the final move up which according to the height of the head of this H&S should get us to 1150ish.

What I rather want to talk about is something I keep getting emails about and it’s the idea of a leading diagonal. If you have no idea of what I’m talking about then this should give you a rough idea:

First up we have only painted two waves and are now embarking on a third – the first move up from 1056 does not count as, just so we are clear. So, I don’t know why this is being discussed in the first place (well, actually I have a hunch – see below). Also, let me tell you that leading diagonals – in contrast to ending diagonals as the final wave of a motive wave – are rarely seen out in the wild. If you see one catch it and sell it to your local zoo – you’ll make a bundle. Anyway, here’s an excerpt from our bible as nobody is better at dispelling Elliott Wave myths than Pappa Prechter:

When diagonal triangles occur in the fifth or C wave position, they take the 3-3-3-3-3 shape that Elliott described. However, it has recently come to light that a variation on this pattern occasionally appears in the first wave position of impulses and in the A wave position of zigzags. The characteristic overlapping of waves one and four and the convergence of boundary lines into a wedge shape remain as in the ending diagonal triangle. However, the subdivisions are different, tracing out a 5-3-5, or 5-3-5-3-5 pattern. The structure of this formation does fit the spirit of the Wave Principle in that the five-wave subdivisions in the direction of the larger trend communicate a “continuation” message as opposed to the “termination” implication of the three-wave subdivisions in the ending diagonal. This pattern must be noted because the analyst could mistake it for a far more common development, a series of first and second waves, as illustrated [above].

Let’s not over complicate things at this stage. The cleanest count puts us either into Soylent Red or Green – if it’s the latter then we may indeed be sub dividing into a series of first-second waves – but why worry about that now?

The reason why I’m bringing this up at all is that I am trying to make a point. It’s very easy to be seduced into counting your book – and it’s an urge you need to fight on a daily basis – I myself have to work very hard at this myself. Don’t cling to wishful thinking, hopes or alternate scenarios when others would have a much higher probability. Thinking up more complex scenarios is not a indication of your advanced prescience  – it’s a sign that you are over complicating things. Another term used in black box trading is ‘curve fitting’ – I guess you get the point 😉

If you are right – you know what to do: You take profits at your target – not before. If you are wrong, then you get out at a point you should know in advance. There is no if or but or ‘how about’ – you made a bet, you were wrong – now deal with it! Fooling yourself or bargaining for yet another tick won’t salvage a losing trade. Even worse – you may turn a ‘losing trade’ (which should be expected a majority of the time) into a ‘bad trade’ – and that is something we cannot condone. Why? Because if you get lucky then you will repeat it – and that is exactly how you will blow up your account – I can promise you that.

Alright, give me a moment to climb down from my soap box….

Yesterday was a great day for the bears. Today the bulls completely reversed the situation and both scenarios are still in play. Due to wild gyrations not only in price but also in A/D ratio and volatility I refuse to favor either scenario – only price will have the final word. Until a breach happens – either above or below – we must entertain both scenarios. As I have maintained – I plan to hold my long term puts and sit through any reversals until the market tells me that I am wrong.