Time To Close The Deal!

The 40-year old virgin is running out of time. Tomorrow will be the last chance to ‘close the deal’ so to say, otherwise we’ll be most likely talking about a 50-year old virgin a month from now. 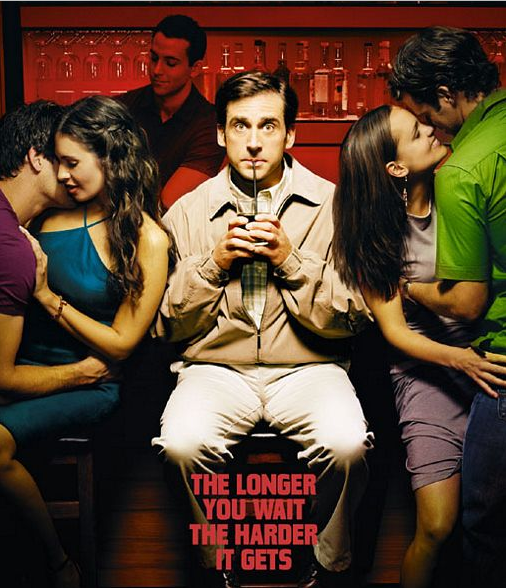 Let’s run through some medium and long term charts to make sure everyone is on point for this coming trading week: 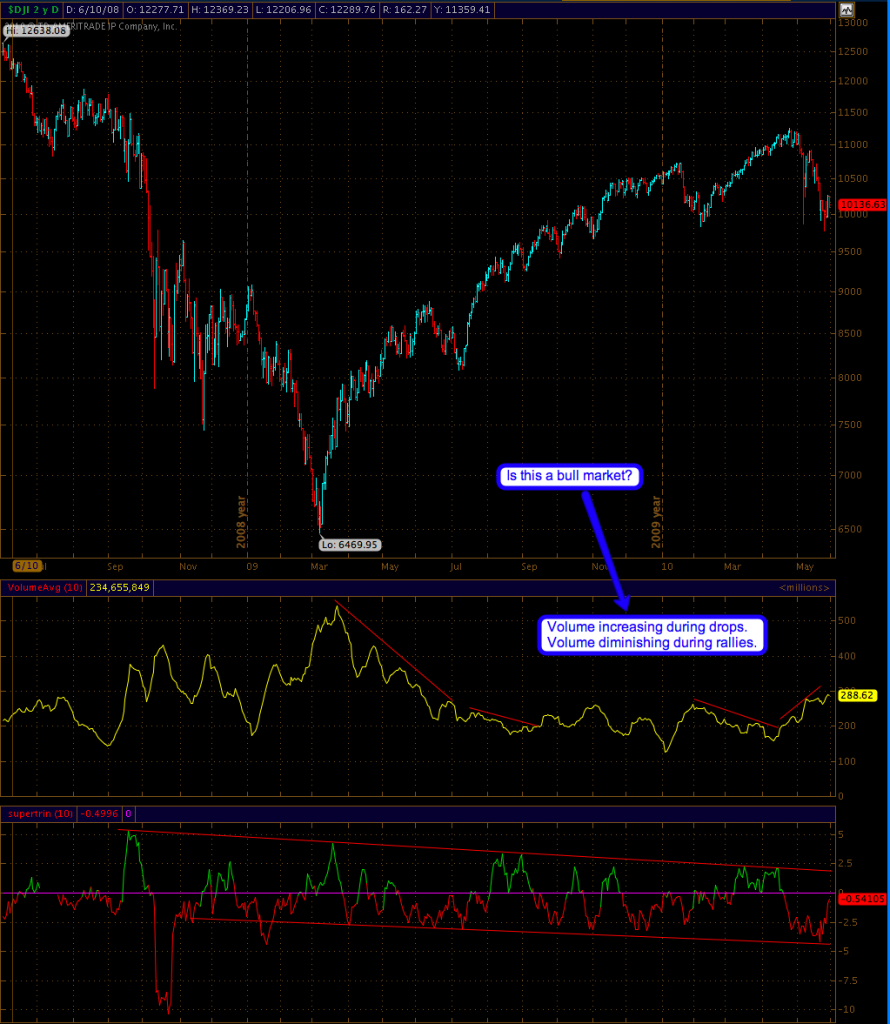 Really long term outlook here. I have shown this chart in the past and what is now an established trend is that of diminishing volume during rallies and increasing volume during drops. Is that a new bull market? One could make the ‘wall of worry’ argument here but if that was the case we wouldn’t have almost doubled in one year, right? 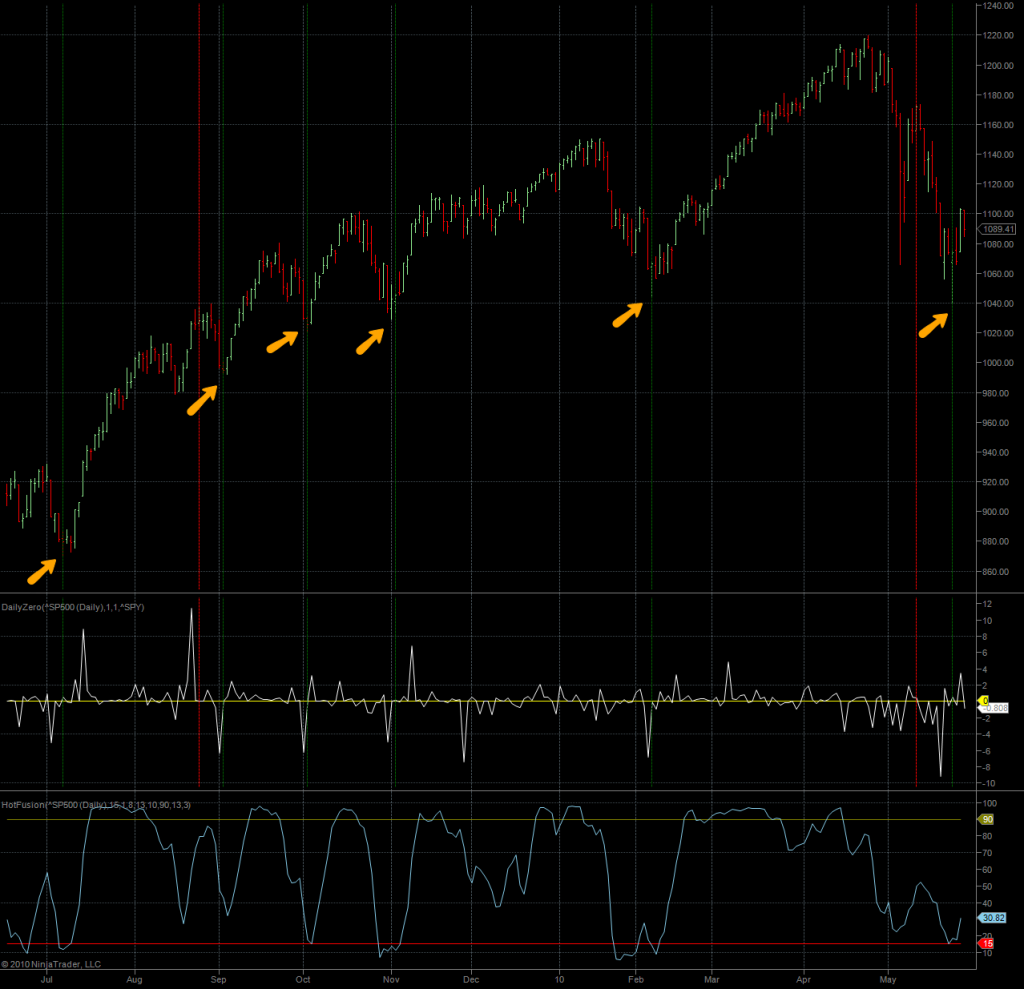 As many of you are Zero subscribers (memberships have tripled in the past month) I am happy to revive a welcome addition to the team – the daily Zero. We were watching the daily until late December, but starting January TOS somehow reset their servers and the daily somehow went blank overnight. Although new data has now accumulated since that big reset I finally had enough and recoded the Zero for my NinjaTrader platform which runs on DTN – a more professional data service. And I’m glad that I did as the bullish divergences precisely at the bottom of lows (marked with green arrows on the chart) alone are worth your monthly subscription. I’m pretty excited about this – although the bearish divergences seem to be a lot less reliable this indicator will be invaluable for any bear intending to play the big swings.

Anyway, the daily Zero has now pushed into positive territory in the past week but then dropped slightly below the mark on Friday. Tomorrow will either be the day where we snap back and confirm a new bullish pattern or we yet again push negative and most likely make new lows for year. For the bears is deal closing time – no more time to waste – 1125 is where the rubber meets the road, for the bulls that is.

I’m sure you want to know what the HotFusion panel is. No, it’s not a stochastic 😉 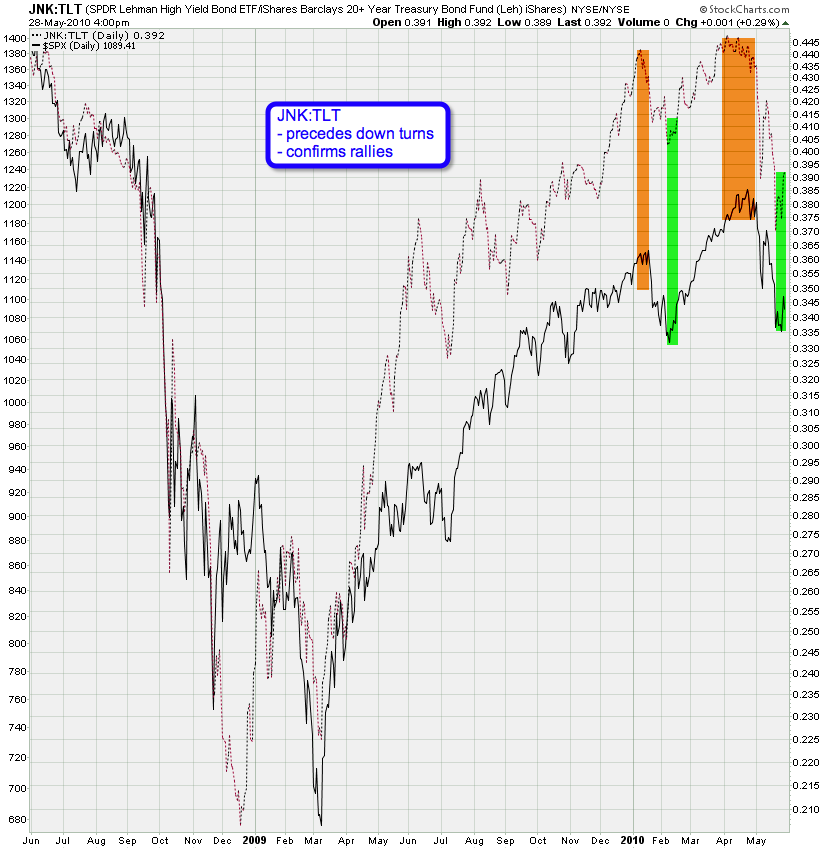 This is my JNK:TLT spread chart. Basically, how tasty is junk in relation to treasuries. Now compare this one with my copper chart: 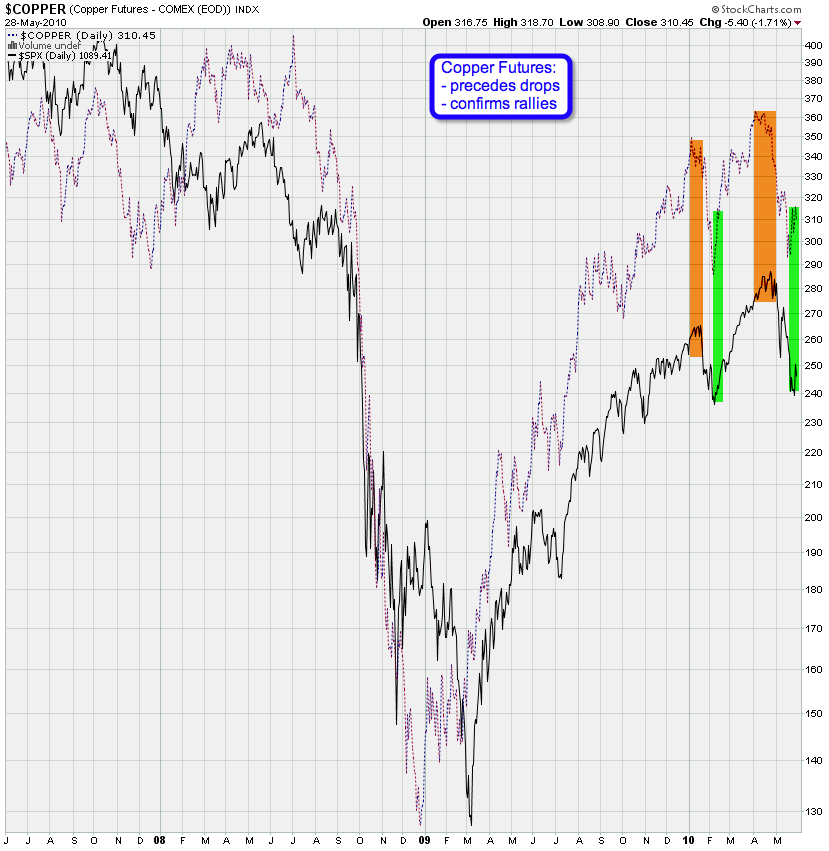 Which seems to tell the same story: Both charts appear to precede equities when it comes to rolling over after a new high. Eventual snap back rallies appear to be supported. We will keep an eye on both. 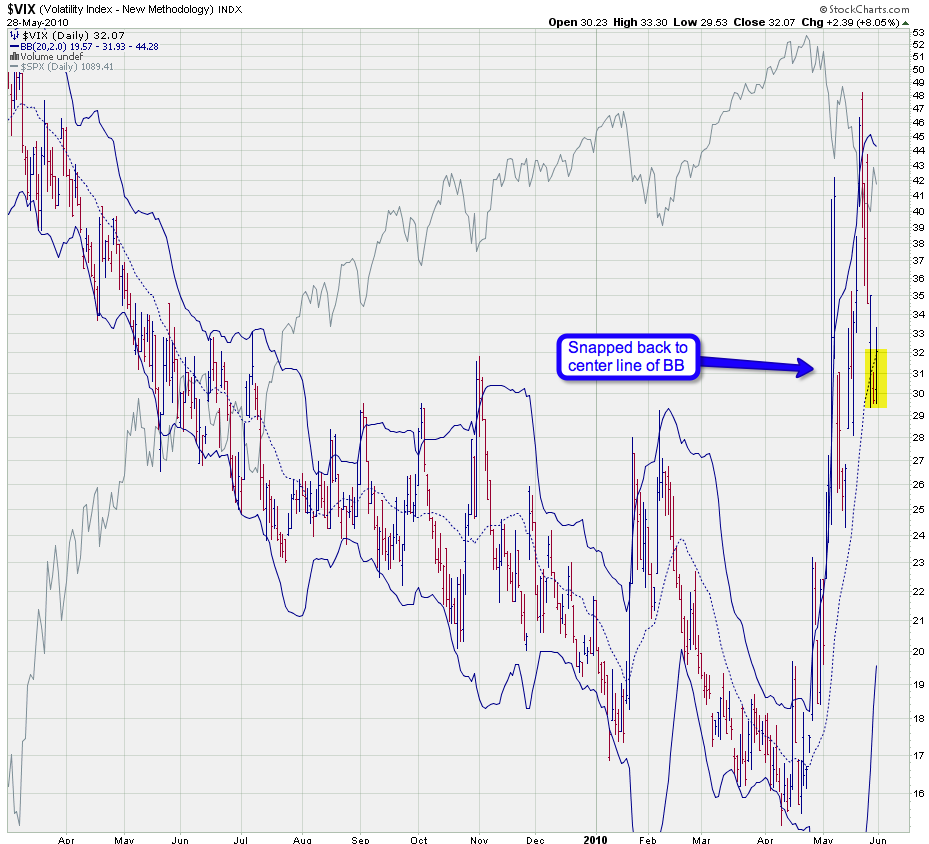 Mr. VIX was stomped on after some pretty intense readings which pushed outside an already overstretched Bollinger. Can’t keep going straight up folks – we need a little rest. Right now we reverted back to base camp at the center line. Again, a breach of this line will spell higher prices in equities – if we hold and bounce it’s possible that the 40-year old virgin gets to first base (i.e. SPX 980). 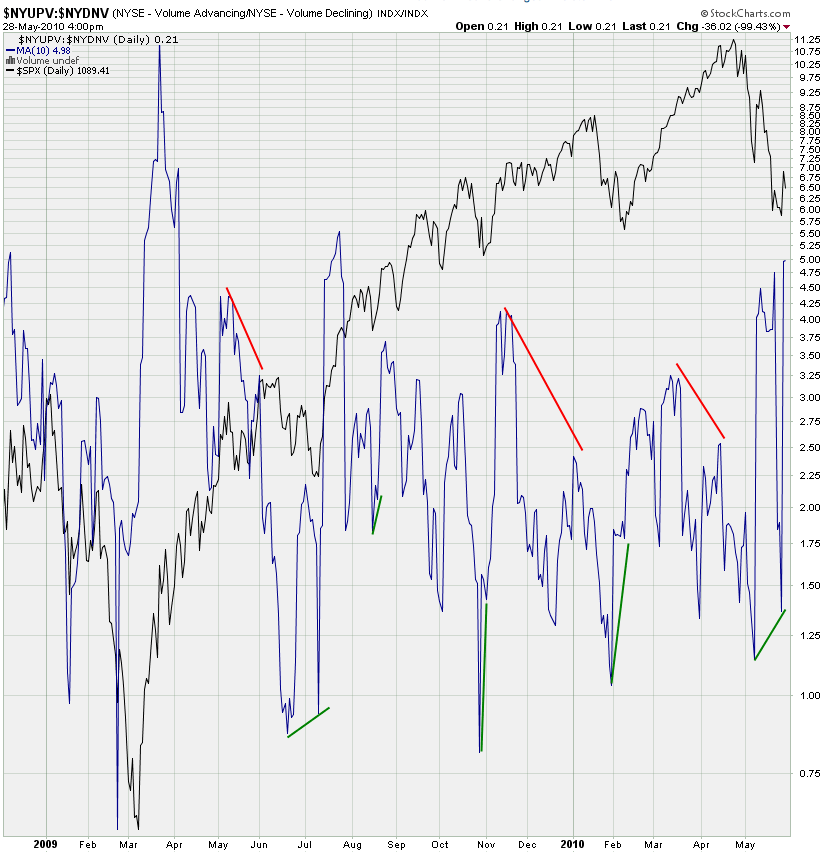 On the NYSE Adv/Dec Volume chart we did get lower close accompanies by a higher reading. The ensuing snap back was pretty intense, just like the one before – which for the record made acting on it a bit difficult. Now we have plenty of momentum to the downside, which favors upside for equities. 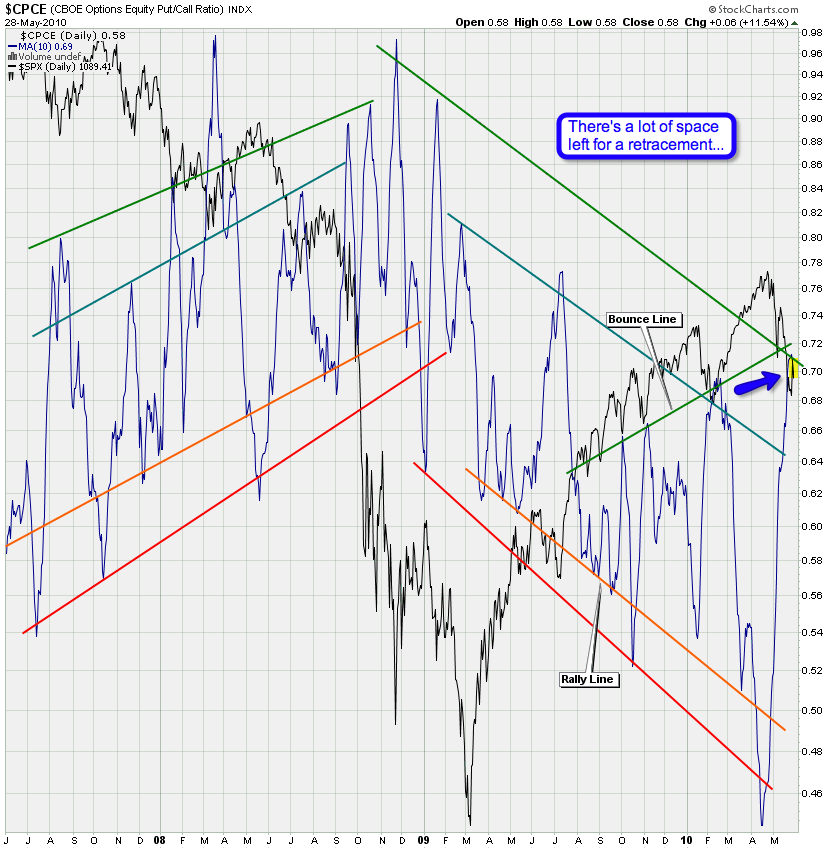 Then there’s my CPCE chart. Nothing really has changed on the 10-day moving average – there’s plenty of air below now, which again will be a head wind for the bears. Yes, markets do fall off the plate in oversold conditions, but it would have to happen quite rapidly – we are talking Tuesday/Wednesday. 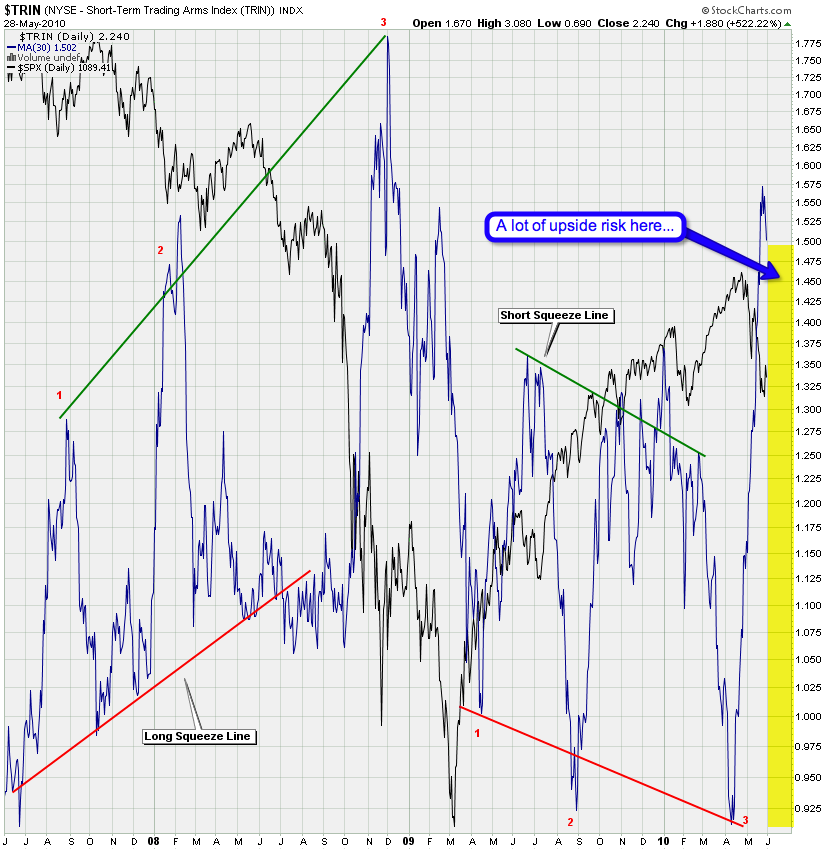 Same story on my TRIN chart. We have come a long way and to go higher we need a non-statistical event. 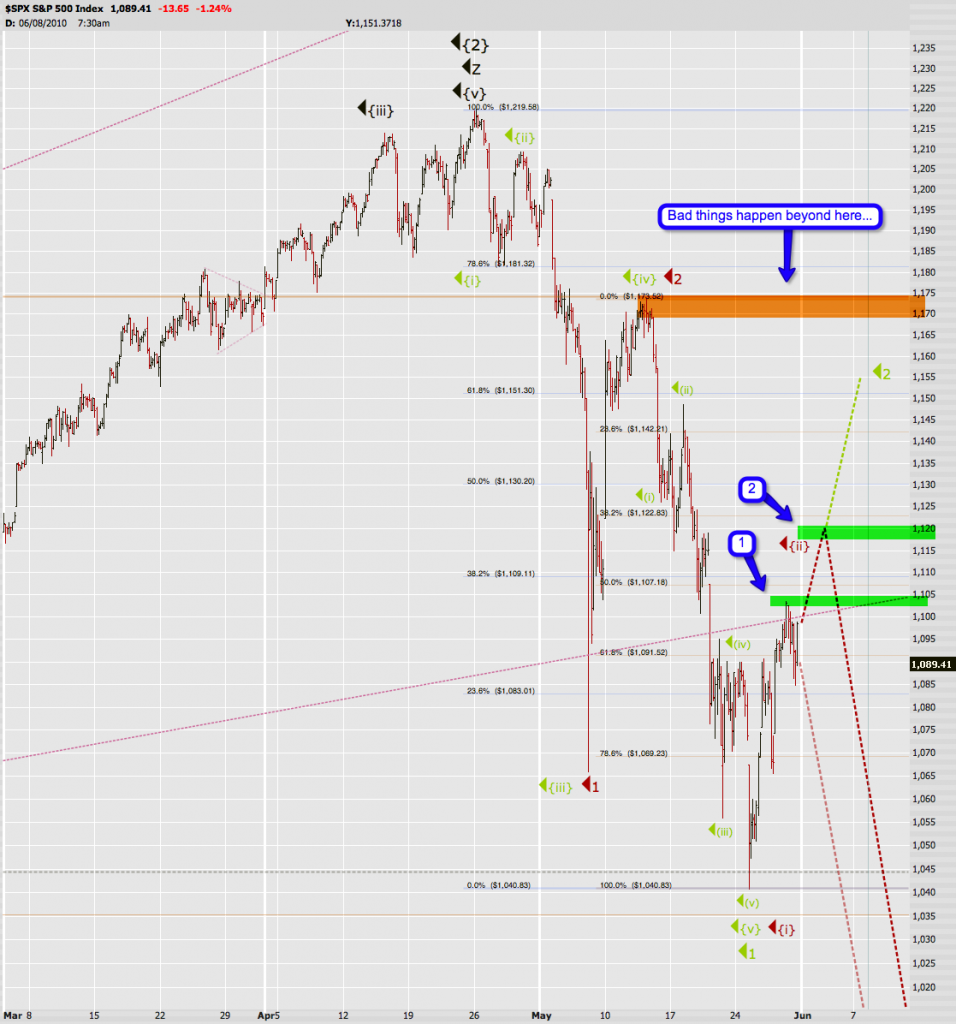 Which brings me to the wave count. We are running out of time and the wave formation now puts the pressure on the bears to make a move. If we breach last week’s high at 1103.52 it will be one strike against the bears – if we push beyond the 1120 mark it will be a second strike leading most likely to Soylent Green. And that one could actually stretch out for quite some time – as we could indeed push higher than 1175. Which brings me to my final chart for today: 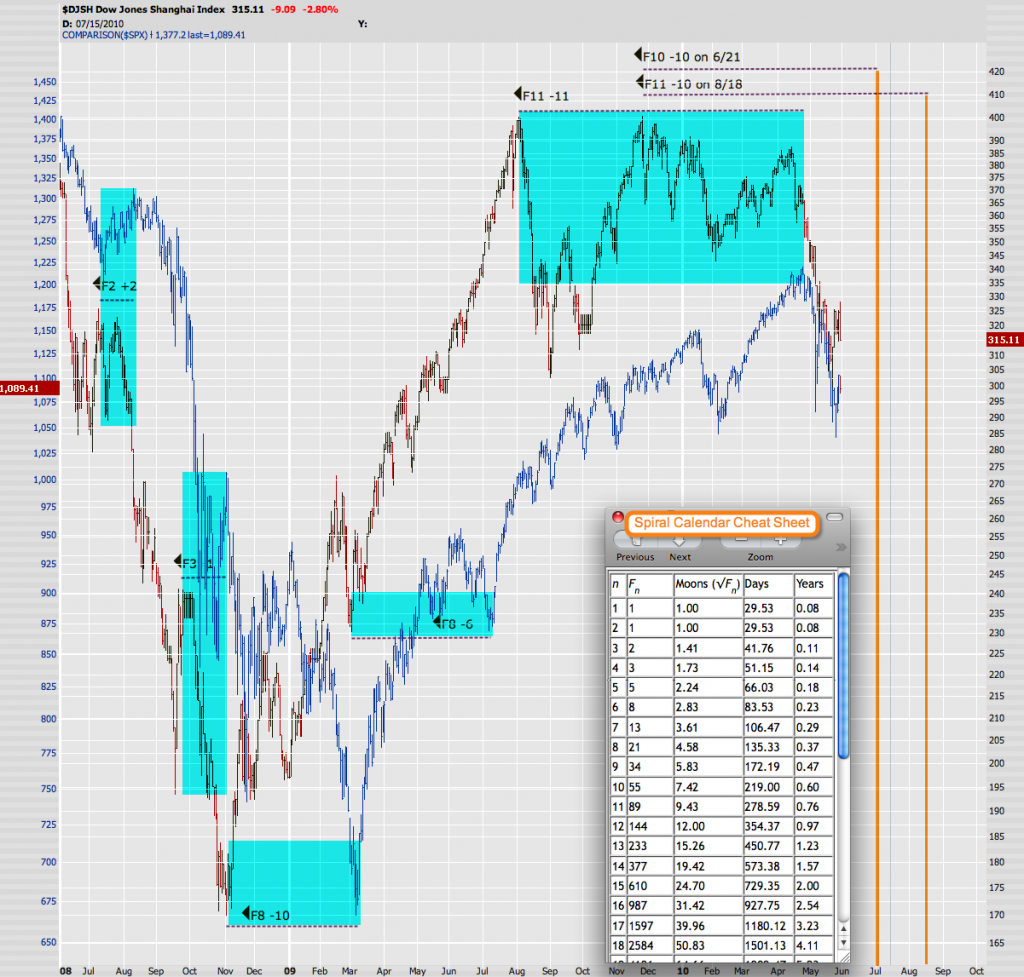 Before I explain this one please make sure you read up on my little intro on the Chris Carolan’s spiral calendar work, which I greatly admire. So much actually that there is also an entire category dedicated to Chris’ work.

Anyway, a while back I realized that U.S. equities were lagging the Dow Jones Shanghai Index – China goes first and the U.S. follows, it seems – eventually. I tried to nail down the approximate amount of delay for obvious reasons and the numbers I got started to sound familiar. So at a hunch I began to correlate the delays via spiral calendar time cycles. What I got was quite fascinating. Back in 2008 we were right on the Chinese’ heels, but now there seems to be a longer delay minus 6-10 days. The chart explains it pretty well – and maybe the 10 day delay is a bit hefty to be taken seriously – not if it continues to line up however. So, it’s quite possible that the current retracement up (which may turn into Soylent Green) could take us close to 6/21. I don’t think 8/18 is a possibility for Soylent Green – perhaps that is where Intermediate (2) would take us – either that or a completely different scenario that puts us into new annual highs.

The bears got to get their groove on starting Tuesday morning. There is simply too much bullish evidence on the table, and the bulls will not hesitate to give the bears a run for the money, and at this point they have the odds on their side. As I said all week – I am keeping my long term puts as this is the only way to not miss out on a sudden drop, which I am still confident will happen – most likely in mid to late June. Unless of course the bears can close the deal tomorrow. Also watch the EUR/JPY (not shown here) – it was a bit overbought on my 30 minute chart on Friday, so there is a chance it could lead equities lower.

Stick with the levels shown on my wave count to scale out of short positions if you are playing things short term. Otherwise, my own approach will be to give this the time second waves usually need to shake out the weak hands.