It’s Superbowl Sunday and while pretty much every red blooded American is watching the big game with a chilled glass of brew in his hand poor Mole is slaving at his desk to produce something intelligent for his stainless steel rats. Now that is dedication! Well, truth be told – I do have a nice TiVo and am not planning to make this an extended affair*, so let’s dive right in. 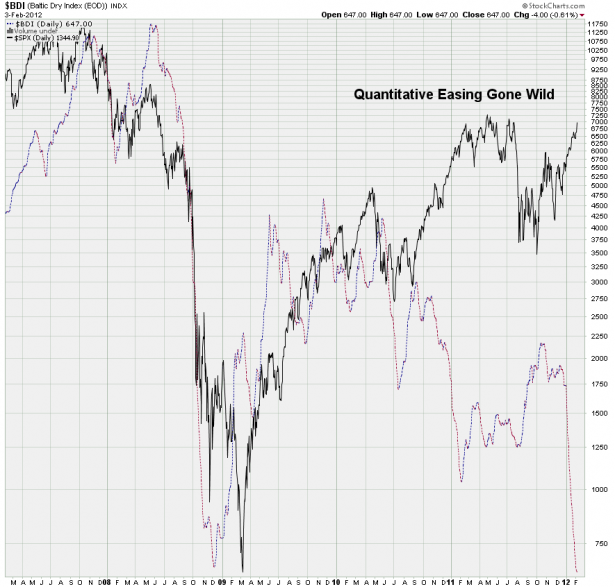 Sundays we always look at the bigger picture at hand am I’m kicking this one off with probably the most bearish chart I have seen in a long long time – since late 2008 that is. Here we have a simple but concise comparison between the economy and the market. One does not equal the other and if you found your way here after following many perma-bearish blogs or analysts then you probably learned this lesson the hard way. Doesn’t hurt to get a reminder here or there and this one, although being a very bearish chart, serves as a lesson to all of us why correlating economic news, events, or even theories with your daily trading activities most likely translates into losses. 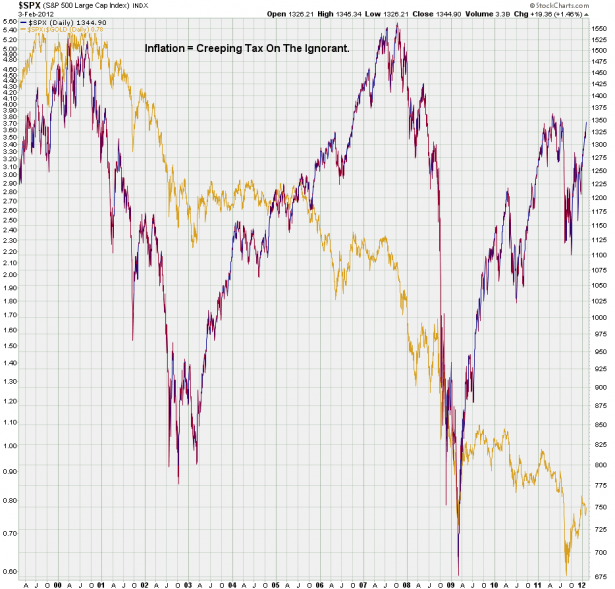 Now I’m not saying that this chart won’t ever have an impact – it will eventually. But probably not in the way you imagined. Maybe you bought your house a few years ago at $300,000 and today it’s worth $200,000 or less in current Dollars, which is bad enough. But if you factor in inflation as expressed by the Dollar valued via gold then your house may be worth only $100,000. Now THAT is depressing and if you doubt my little analogy then I dare you to come over here to Los Angeles, fill up your tank and go shopping on the West Side. Since about 2000 the cost of anything I can think of has at roughly doubled, and that includes rent, food, clothes, etc. I’m not exactly hard up these days but even I get a jaw drop here and there when looking at price labels of the most common consumer items. Either that or the size of the product has been shrunk or the quality of the item is not what it used to be.

Anyway, we usually do not concern ourselves with economic events here at Evil Speculator. There are better sources out there and although I do read them I do my utmost to not let them affect my trading decisions. Our main focus here is to profit and at minimum keep pace with inflation. And I should say that we’ve done consistently well on that end due to objective analysis, an expanded trading horizon, fading of our emotions, and timely picking of markets. In recent past I have not been very excited about equities in general – unless you are a trend trader unidirectional periods are a bit tough for traders like me. I enjoy turning points, resistance/support areas, heck even range bound tape. Well at least my level of interest in playing equities may just about to change.

Last week I pointed out a little formation on the weekly SPX that greatly diminished the medium to long term bearish case. I was talking about a touch (but not a breach) of the upper 25-week BB line, followed by a small sideways correction, effectively circumventing a short setup and opening the gates for a medium term continuation higher, in particular as the upper BB is now starting to point up.

Now we are near some price specific resistance in the form of the July 2011 high at 1356.48. A push above this may be followed by a small correction but would confirm the bullish price objective we have been watching on our point & figure chart: 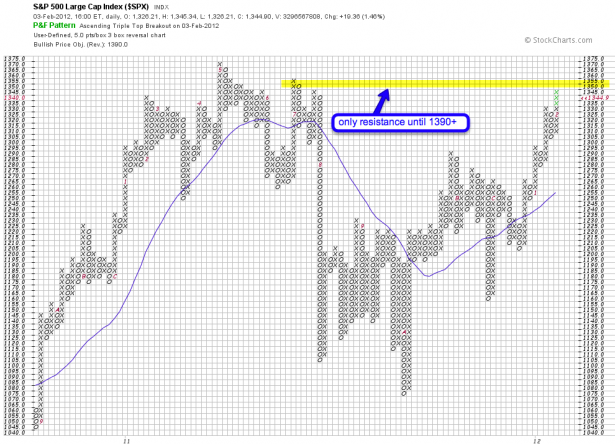 Once you remove all the noise things really come into focus, don’t they? We have not only one but two important peaks here in succession. And once we get above 1370.58 then Bob’s your bullish uncle and most likely we’ll go all the way to 1390 – frankly it’s possible we’ll get above 1400.

I have expanded the scope on my Dollar P&F chart a bit as I’m more interested in the medium to long term right now, especially as we are near an inflection point on the equities side. And even if you are not a P&F aficionado you probably recognize that we are near an important low which when breached may lead us to the downside. My P&F claims 75.5 and if that happens I can kiss a favorable EUR exchange rate goodbye this summer. Knowing this I may actually start hedging myself a little on the EUR/USD side in order to compensate for a big drop here. Of course until we get a breach this is a pretty nice long opportunity 😉 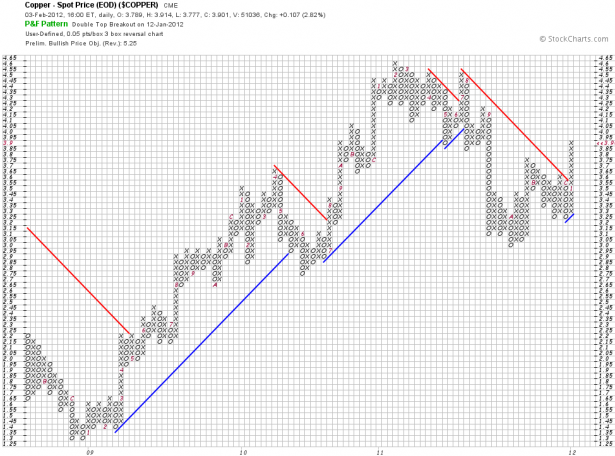 Since we’re doing a walk down the P&F alley I thought I’d include copper as well as it’s usually telling us what to expect on the equities side. And it’s looking very bullish with a price objective outside the scope of this chart. 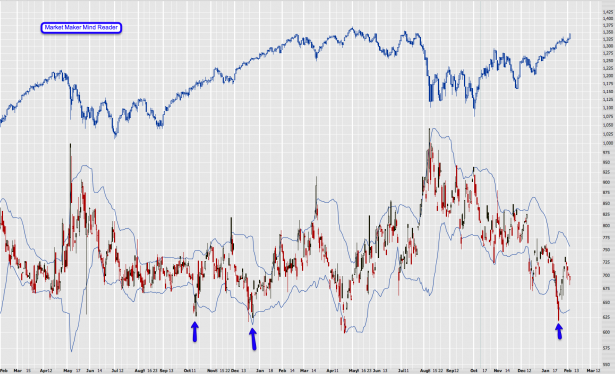 The goal of this post is to tell a tale here and it’s one of periods of bearish non-compliance or futility. My Market Maker Mind Reader shows me two prior events in recent history when we had extremely bearish readings which were completely faded. The end result is what we may be getting right – a continuous trajectory higher with only limited/brief corrective moves. 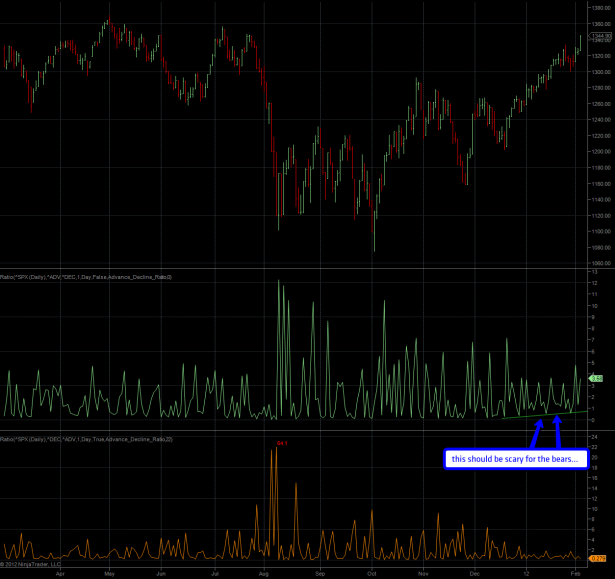 My A/D ratio panel suggests the very same – as you can see we are painting a very unusual diagonal support line here. The last time I saw this very formation was (you guessed it) during the very same periods the MMMR was oversold (i.e. in late 2010) but was not followed by a correction. So consider this exhibit B and bear in mind that stepping in front of a speeding train usually ends in tragic consequences.

Although sentiment was überbullish and various divergences were present about two weeks ago we did not get a meaningful correction. A perfectly valid VIX Sell signal ignominiously turned into ashes and was followed by a RTV sell setup (however not confirmed according to Scott I should point out) that resulted in a stop out. And that during the onset of what is usually a very bearish seasonal period of the year. Now, seasonality may still get its day and perhaps it will be near 1356, but even if it does evidence suggests that any correction to the downside would be limited and should be considered buying opportunities. Remember Scott’s Law: If something significant is supposed to happen and it doesn’t then most likely an equally significant inverse move should be expected. We keep seeing this over and over again, and until it changes we should continue to float with the trend.

Now per the title of my post – we are near inflection points and thus trading just got a bit easier. Why? Because we only have a few handles to go (medium term that is) until we hit some significant resistance presented by prior peaks near 1356 and 1370. This will be a great opportunity to take out some OTM puts (i.e. lottery tickets) – AGAIN EXPECTING TO BE STOPPED OUT (some of you guys apparently did not listen the last time – sheeesh). Do we need to resurrect the HTML blinking tag? I certainly hope not. Once we breach or slightly before we may get a fake out move to the downside, which IMNSHO would be a great opportunity to follow the medium trend to the upside. Until then I will remain nimble on the equities side and focus my efforts mostly on FX and commodities setups.
[/amprotect]

* Looks like it turned into an extended affair after all – I just can’t help myself 😉
Cheers,