After marching twenty million fellow citizens in lockstep for the last few decades fellow megalomaniac and fashion trend setter Lil’ Kim (a.k.a. Kim Jong-Il) is getting tired of the game and has decided that it’s time to initiate the rite of succession. Which is bad news for his youngest son Kim Fatty (a.k.a. Kim Jong-Un) who had to give up his X-Box, get a company haircut, and toss his Diesel jeans for a North Korean military outfit. We will all dearly missed you on COD Modern Warfare, I-Will-Nook-You#Western_Bitches! 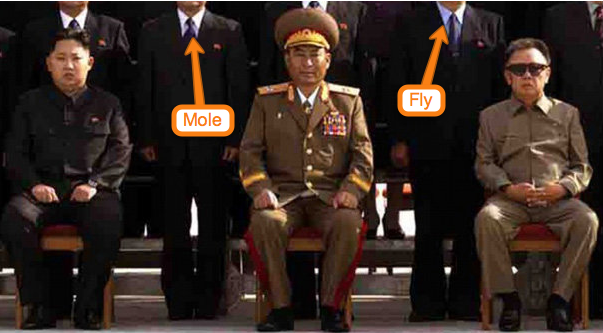 Thanks to my new Korean language skills I was able to crash the recent party gathering (see pic above), and mingle with the new powers to be. Although things got a bit out of control after I got wasted and decided to climb up the 160 meter high flag pole in Propaganda City – in my knickers whilst waving a bottle of Cristal and singing ‘God shave the Queen’. After that little stunt I had to concede that state controlled media does have its advantages, especially since I couldn’t carry a tune in a bucket.

Similarly the markets seem to be in the process of a slow (but noticeable) transfer of power. The bulls were able to use some clever overnight futures games to push the tape over 1150 this morning, but yet again we snapped back to whence we came. It’s time to look at a few charts to see if it may be time to risk some negative delta. 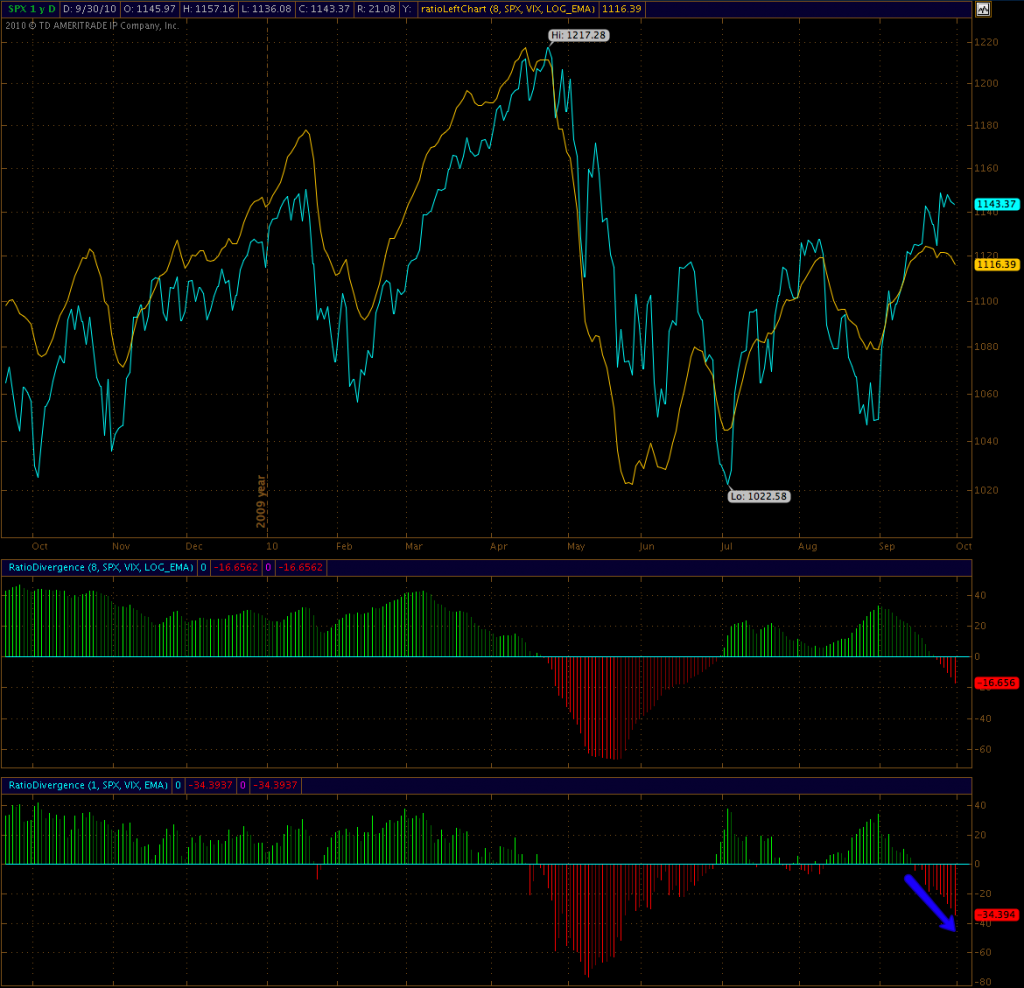 I posted my SPX:VIX ratio chart the other day and thus far the divergence seems to be increasing. Now, whether or not the SPX will obey and follow to the downside remains to be seen. Maybe next week, thus far that mysterious dip buyer is always there to save the day. 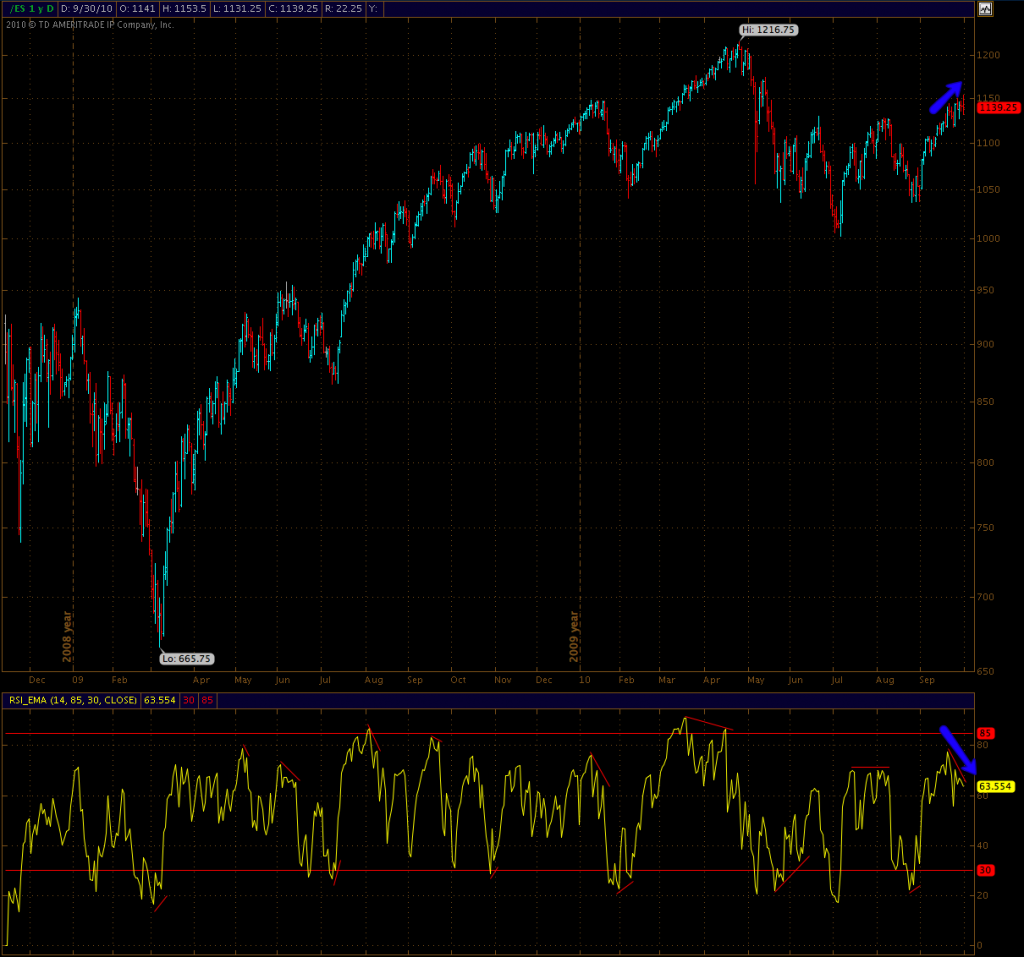 Similarly that divergence on the RSI_EMA also seems to be increasing. But careful – take a look at what happened in late April: We saw a similar divergence and then the tape popped up one final time. Which of course is impossible to predict – I grant you that – thus if you take your chances here don’t be surprised if we see one big blow off top, maybe to 1170. 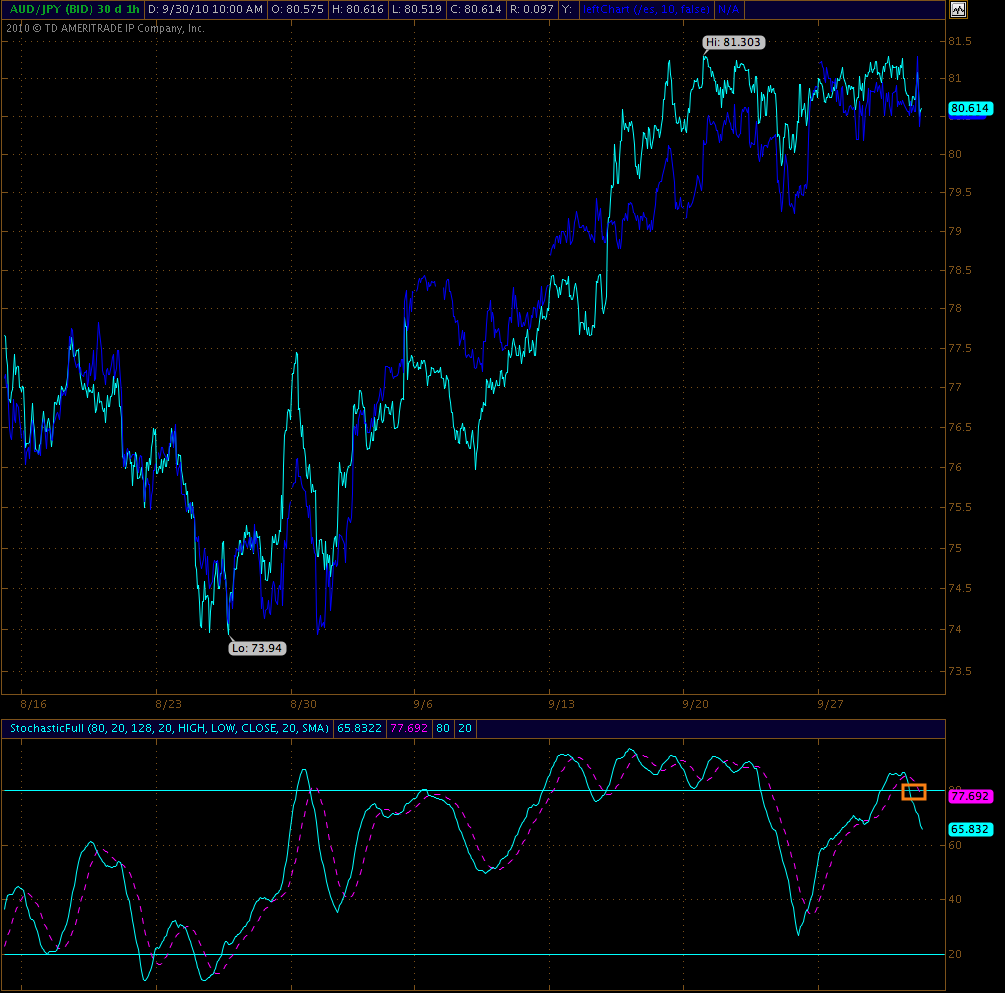 The stochastic on the AUD/JPY finally managed to drop below the 80% line. But prices are not following suit thus far and I remain skeptical. We could just go sideways here and burn off some overbought conditions. If there is a drop in the works then it should happen fairly soon, preferably tomorrow once the end-of-quarter painting is in the bag. 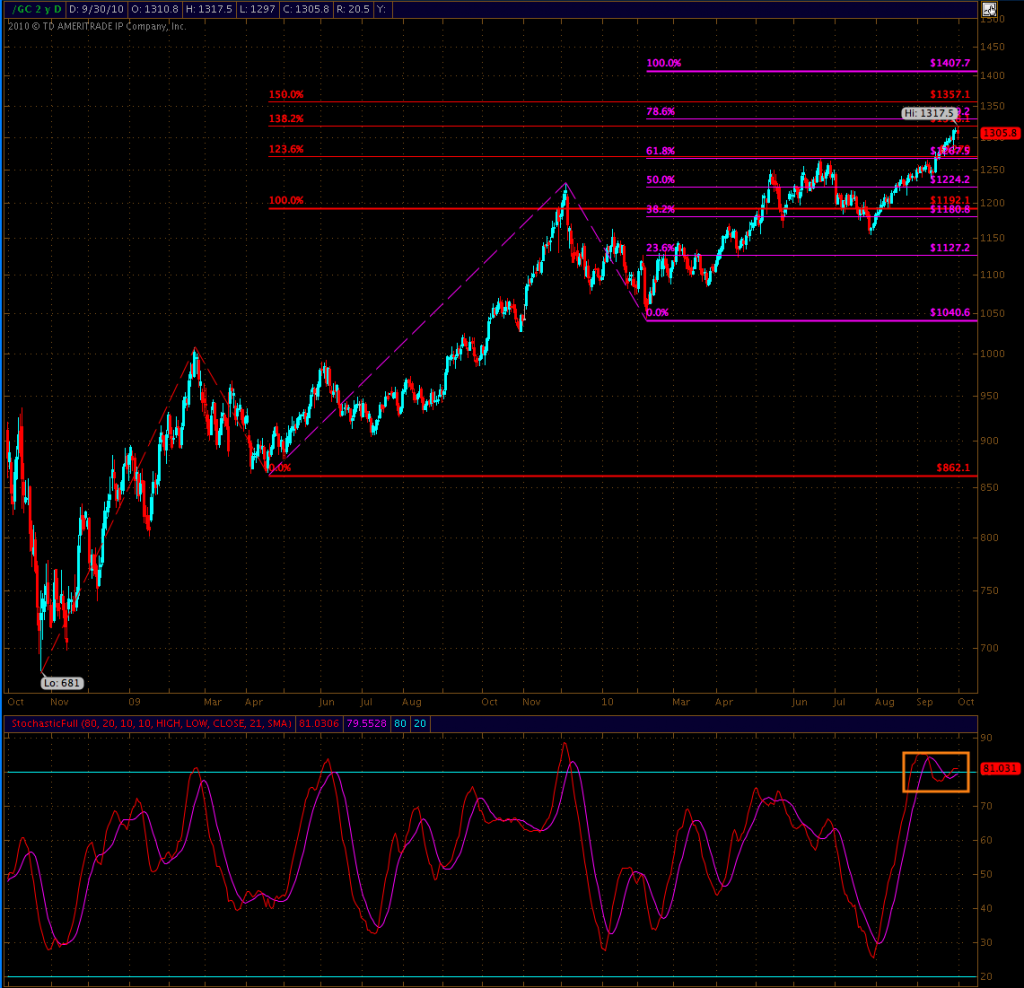 Due to rampant manipulation I stopped talking about gold about two years ago. Plus it’s mostly a bitch to trade, but that’s a different story. Anyway, most recently gold has gone exponential and you couldn’t find a gold bear if your life dependent on it. Which is why a top may be near – most preferably one would want to see that 80% mark breached on that stochastic however. As you can see we have done a bit of an under curl and after than we pushed higher. Textbook psych! fake out and we may push to 1350 before we see a top. Same story as with currencies – the trend is the trend until it’s over. If you’re playing the ‘call a top game’ then I recommend you keep tight stops as your best friends.

What I’m seeing as of late strongly points toward distribution and clandestine selling. But we need more time here and the bulls may just have a little surprise in the works before a transfer of power gives the bears a chance to benefit from vastly overbought conditions. Whether or not they’ll actually step up is another story – just like Kim Fatty they don’t seem to be too eager to grab the reigns and get serious.

Before I run – here’s a recent Yahoo News update by Pappa Prechter. I know some of you have become a bit disillusioned about Hochberg’s STU, but let’s not fall prey to swinging to the other extreme either. He is making good points here and although that right shoulder may extend he may still be proven right in the end. If you ask me, it doesn’t hurt to download his free report and then decide if the old grizzlie has a point or not.

(Note: This interview was originally recorded on September 20, 2010)