UPDATE 10:35am EST: Wow, that was a nice ride down. The Yen is on fire right now but I expect a re-test of the 1.106 R2 pivot. I think we’ll chop around here for a little before any large reversals (or drops). We have moved quite a bit this morning. Interestingly the NTX has stayed right at the open and the VIX has barely moved. I’m not quite sure what’s going on there just yet. Got to think about this.

UPDATE 11:08am EST: Well, it’s not for a lack of trying but equities are not getting out of the gate this morning. We’re back to chop chop chop – hopefully until we drop. I’m just sitting and watching right now as I was actually hoping for a rally so I can sell the rip.

UPDATE 12:33pm EST: I got kicked out of 2 sell ETAs now and will probably wait for a VTA before I grab another contract. I know it’s frustrating sometimes but we’ve seen this before. You try your luck during the chop and then give up – and it’s right then when the market decides to drive up like nuts. Patience and perserverance (and perspiration) is key.

UPDATE 12:41pm EST: Let’s take a quick step backwards. The way it’s looking the bulls might muster a little rally by the end of today, but frankly I’m more concerned about the bigger picture. 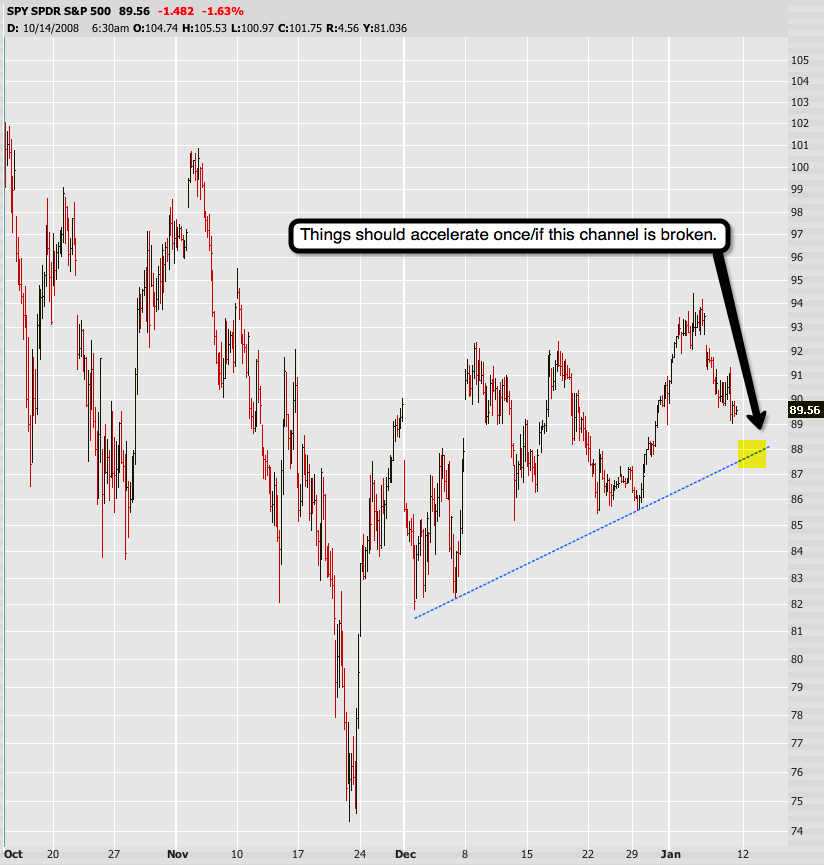 There you have it – the magic number is about 880 on the SPX, which is also a retracement level (879 to be exact). That sucker will be tough and it might take us some more ‘good news’ to breach it 🙂

UPDATE 1:11pm EST: You can add a VTA to those two failed ETAs. It’s easy to get frustrated and not take the next one but you know what usually happens then. Those whipsaw markets are not fun. Trick is to exhale and look forward – as long as you stick with your system you didn’t do anything wrong. You can get a bit more conservative but even that bites you in the butt sometimes. Consistency is key – I’ll keep taking the signals as they present themselves.

UPDATE 2:55pm EST: Frankly, I can’t wait for the closing bell at this point. It’s been one horridly choppy day with an obvious trend to the upside. Painful to watch and not fun to trade. After 98 tries we finally made it through that 898 pivot – let’s see if it holds.

UPDATE 3:53pm EST: That’s right – SELL SELL SELL mofos!! Today was a pain but this sell of is a bit of a take back. Loving it. The Yen is on fire now and might just breach its high – it’s been above its VWAP for about an hour – a good sign for a late day sell off.