I’m a bit pressed for time this afternoon (evening on my end) so let me get you guys up to speed on what’s happening on the equities side. Obviously we’re bouncing all over the place but if you look at an hourly E-Mini chart then it’s clear that the we’re painting lower lows and lower highs. 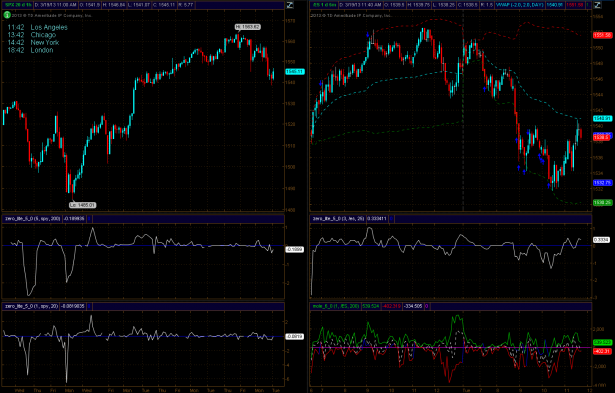 The momentum on our hourly SPX Zero chart appears to be dropping below the mark, so  this could be the beginning of a larger correction. Let’s check out the spoos to sink our teeth into some potential support levels:

Obviously the 100-hour BB has been offering some support today. On the daily panel (right side) we have the 25-day SMA plus the NLSL at 1532.5 – the latter was breached briefly today but thus far it’s holding. I’d say that the bulls still are in control as long as the 25-day remains intact. A drop below would get us back to the lower 25-BB which is now leveling out around 1488 plus minus.

Silver has been boring the heck out of everyone but I think that’s about to change. That sideways run on the daily panel is about to run into a little wedge and price will finally have to pick a direction.

Alright, that’s it for now but I do have another goodie in the works which will be posted in the coming hours. So stick around!