With the exception of the ongoing Euro squeeze (also affecting bonds) the tape continues to run in circles. My appetite for exposure in either direction has been greatly reduced as I’ve been spinning like mad over the past few weeks, extracting a small edge out of each incoming wave of gyrations. There however comes to the point when you must admit to yourself that the input required does no longer justify the return. I’ve been lucky to not having banked any losses but not since my high school days have I worked so hard for so little return.

So why bother? Well, these are the times when you collect evidence, get a feel for the pulse of the market. Right now what I’m seeing is mostly noise, confusion, exhaustion, indirection. Not surprisingly so after almost six months of mostly sideways tape. When I analyze myself I’m pretty much in sync with that range of emotions and I’m not easily crushed by difficult tape. 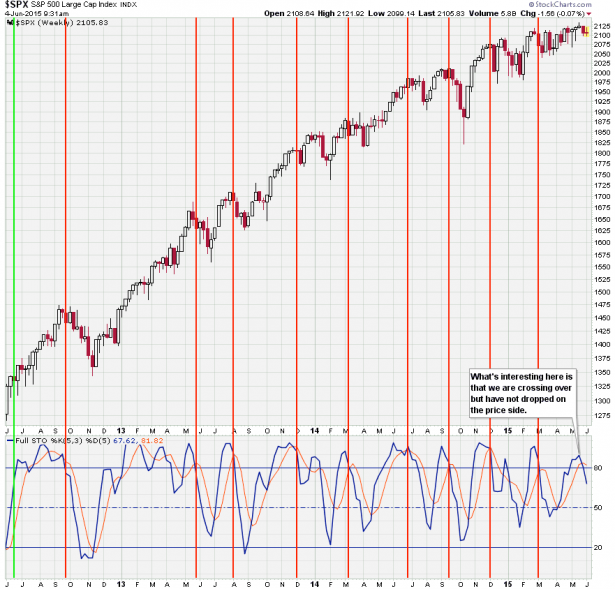 And those are exactly the times when I visit some of my old friends. If you’ve been coming here for a while then you may have come across this one – the weekly stochastic on the SPX. You all know I only use indicators very sparingly and stochastics – ha, almost never! This is the one exception because rarely has it let me down. I have highlighted the times when we have seen a cross over followed by a dip below the 80 percentile. In almost all cases we saw some degree of correction following it.

What’s interesting right now is that price has not responded yet. This is not completely unprecedented – we saw a similar pattern in late 2013. Then equities punched higher, burning the shorts, only to paint a pretty significant correction shortly thereafter. But what’s different this time is the sideways mess which has preceded this pattern. To me this either means we are correcting sideways or large market participants are distributing. We’ll know more once/if K% line touches the 50 mark – it rarely does without triggering price action. If that happens then we are most likely talking sideways correction.

Either way what follows is likely to be big and therefore my concern is that of getting a seat on the bus. Thus far we have failed in picking a direction. We were extremely fortunate to not get burned on either side (i.e. long/short) but I don’t want to try my luck by forcing the issue. As of right now I don’t see a good entry on the equities side. And yes, it may drop without warning and leave me behind. Which would be frustrating, especially after several attempts. But not as frustrating as damaging one’s account by relenting to guesswork and reactive trading activities. 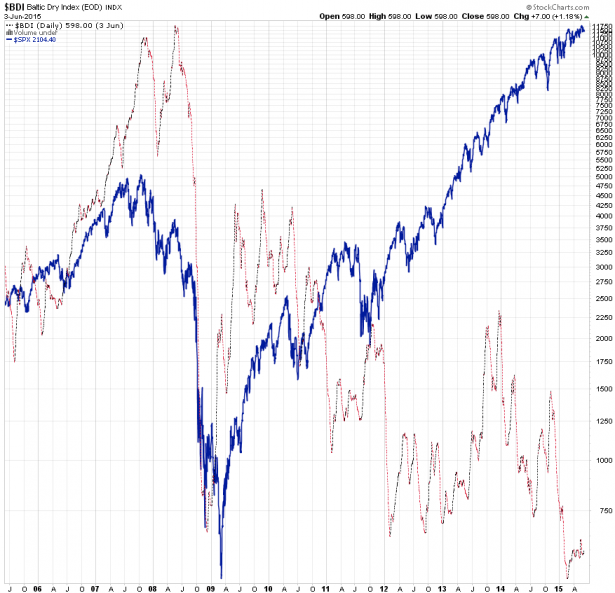 Another old friend of mine – who of you guys still remembers this chart? And who of you would know what it represents?

The Baltic Dry Index is a composite of three sub-indexes that measure different sizes of dry bulk carriers (merchant ships) – Capesize, Supramax and Panamax. Multiple geographic routes are evaluated for each index to give depth to the index’s composite measurement.

There you have it – you are basically looking at average container shipping rates across the planet. And clearly the drop over the past year also has a lot to do with lower crude oil prices. But still the question bodes – how many more years will equities be able to bubble higher without the backing of a real economy? After all you can only sell so many yoga apps on iTunes. Meanwhile I’m seeing VC capital being thrown all over the place, just pop by Tech Crunch and look at the recent queue of investments and acquisitions. I just did and only had to scroll down to run into this:

Scott told me the other day that one of his friends raised a few Million for a meditation iPhone app – no joke. It’s all eerily reminiscent of what I was witnessing up in Silicon Valley during the dotcom bubble.

As you know I don’t trade this stuff and I don’t want it to affect your trading activities either. Remember the old adage: Markets can remain irrational a lot longer than you can remain solvent. I’m not turning into a bear by any definition. However, that said, the long term picture is rather scary and it seems we are approaching a point when this equities bubble fueled by global printing presses may just hit a snag. May hit this year, next year, perhaps in 2020 – who knows. But plan accordingly. Which means: 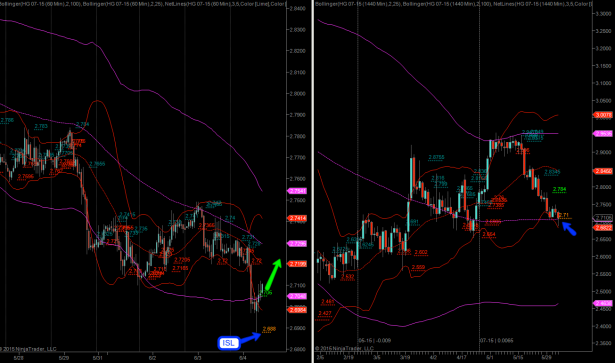 On the setup front I’ve got copper – tried to get in here before but got kicked out, fortunately at break/even. It’s now pretty much where I see buyers defend the 100-day SMA. Long here with a stop below that big spike low. Let’s see what happens.