I’d like nothing more than to continue my fair-weather track of no particular agenda, favoring neither direction for the markets, and keep adding nothing brilliant to these pages.

I guess I’m about to screw myself instead.

Not that I’m cemented in any conclusions – I remain an idiot, thankfully (out of necessity if not for just being an idiot). But negatives are swirling now among us, monkey-wrenching the prospects for further rally. And further potential catalysts are due later in the week.

Yes, we did close off the lows in Tuesday’s drubbing, but nothing about the action was overly positive. And for the first time in a long time, internals were resolutely one-sided + negative.

Here is a brief bullet-list of present negatives…

-Tuesday was the strongest trading volume of the year and all the indices declined (clear institutional distribution)
-The Dow was off only 0.34%, but the Nasdaq, NDX and Russell 2000 declined 1.3% each (and the SP500 0.94%). In other words, leadership was leading lower while selling in the headline-grabbing Dow was modest; making things appear less negative than reality.
-Market breadth this early into the year is rarely very negative and Tuesday showed greater than 2.5 times more declining stocks vs. positive; a seasonal anomaly and a clear negative.
-A flurry of new proposals to tax bank profits and executive bonuses creates a new (difficult to measure) negative for financial stocks in the short-term.
-Volatility rose Tuesday, closing above Friday’s close and reversing Monday’s accelerated downtrend (the dramatic pivot in the VIX constitutes a reversal-signal
-While bullish sentiment has not reached extreme highs, it remains on the high side;  bearish sentiment, meanwhile, remains extremely low (negative). for Volatility; which implies further downside likely ahead.

Further, Intel (INTC), which reports Thursday after the close, is pricing in a 7% trading range now for following that report (up from 5.5% on Monday). In other words, the expected trading range between the high and low, following the news, is up to 7%; a big number for bellwether Intel.

Friday then has 3 potential catalyst for volatility – 1.) it’s option expiration; 2.) it’s the first trading day following Intel’s report from late Thursday; and 3.) financial bellwether JP Morgan (JPM) reports before the open; just in case everything else is a yawn.

The NDX is now flat on the year and the Nasdaq is higher by 0.58% only. These indices are the definition of churning lately (little or no progress as volume rises). Remember, it is only a couple weeks into the trading year and seasonals are favorable. Leading indices however are distributive and churning, volatility is flashing succinct sign of life and a market’s first-leg down following a major-bear’s strong bounce higher is (historically) not pretty (retracement moves lower following the bounce of a major bear, which this market has yet to witness, have tended to run higher than standard 10% corrections. The data sample on this is small, as there have not been enough major bear markets, but 10% would equal the smallest first-leg down and 39% the highest).

I’m not sure that current sentiment has priced this possibility in, if you get my icy drift.

Further further, what happens when a market churns in the beginning of a new year, following a decent run-up? Again, there are not so many examples, but they tend to lead to corrections, or sometimes worse.

Take the daily-view (below) of the Dow from March, 1983 to September, 1984 and pay special attention to the churn at the beginning of 1984 (it behaved enough like the Nasdaq has so far this year to at least be wary; both examples are clear cases of churning…running up strong out of the gate and then going nowhere for several sessions, before turning down).

All of this is not to say the toast cannot fall butter-side up for this market (it’s a brave new world after all!) and subsequently I’m not ringing alarm bells, calling for dramatic downside. For that reason I won’t refer back to this post if the market gets ripped in the coming weeks.

…though I would like to give myself a genuine hard time however, should we rally straight-up from here instead 😉 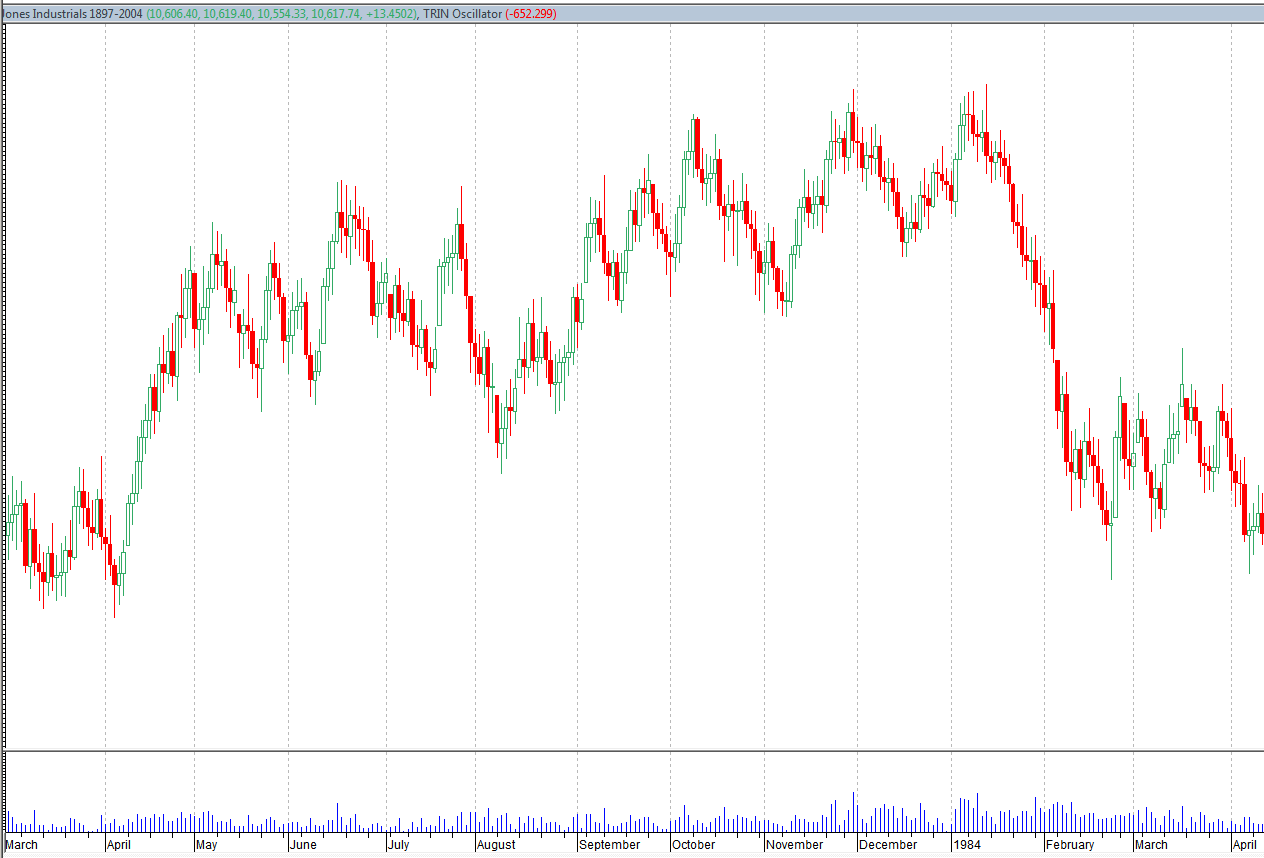 *Click and expand to view clearly; thanks to ultra for drawing this one up.