Is it a bird? No!  Is it a plane? No!  What is it? It’s a bear being shot out of a canon! And I’m not even exaggerating as this rally may be nearing its first leg but is long from being over. The bears basically had been handed eighteen months to take this market to the woodshed and failed miserably. Every. Single. Time. The price to be paid is going to be enormous because a failure of this magnitude should come with an appropriate punishment. 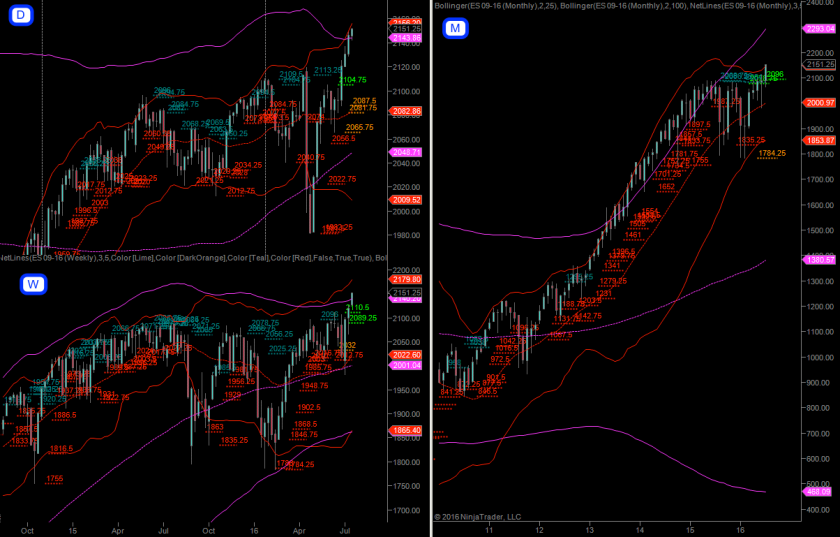 The medium to long term panels are locked and loaded, with the daily and the weekly slipping above their upper BB(100). On the monthly the upper BB(25) just said goodbye and Net-Line Buy Levels (NLBLs) on all three panels were sliced and diced and then forgotten. All of that resistance will serve as long term support moving forward, establishing a veritable Maginot line of buying interest that will be extremely difficult to circumvent in the coming weeks and months. 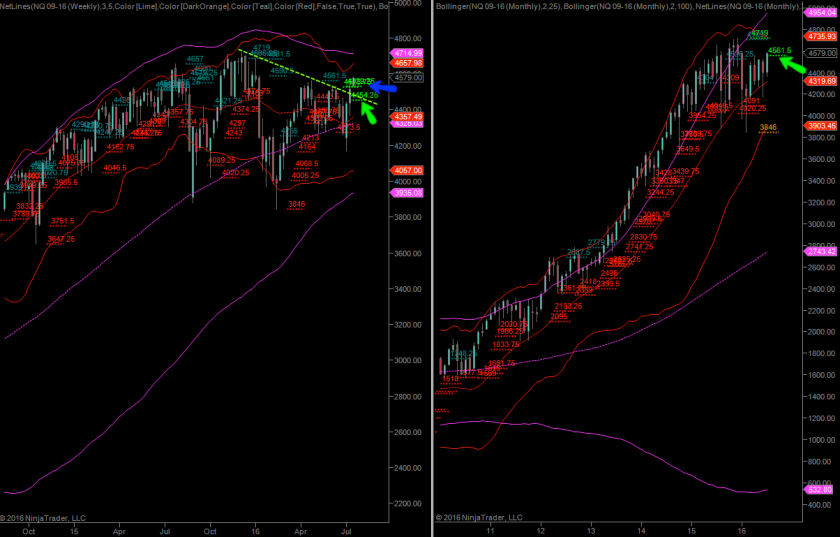 Obviously our NQ campaign has benefitted tremendously, even though the Nasdaq is merely following the S&P’s lead right now. Nevertheless the weekly panel shows us now above the diagonal resistance that led us lower over the past year and on the monthly panel we’re in the process of passing a weekly NLBL, which would be a nice buy signal if it manages to hold for two more weeks. 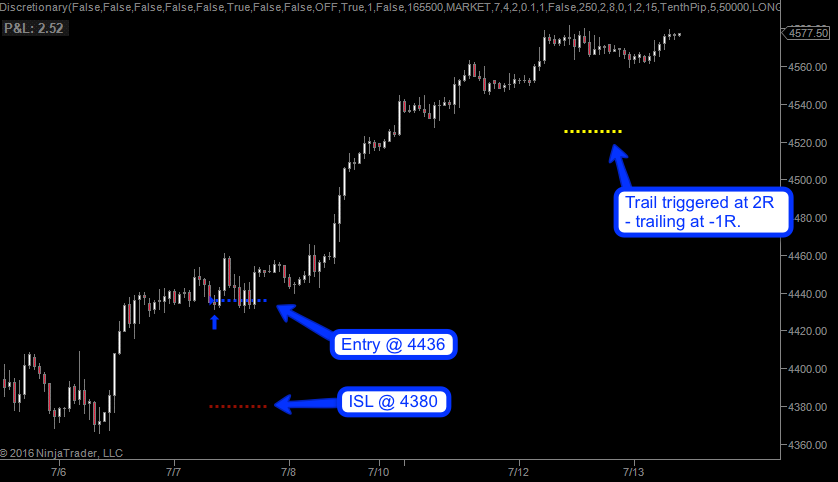 When browsing the comment section yesterday I was disturbed to realize that some of you cut positions early (in equities and other trending symbols) and are apparently missing out on much ill-gotten gains. Allow me to repeat a trite but true aphorism one more time as it is crucial to surviving as a trader on a long term basis:

Cut your losers short and let your winners run.

To add a bit more context to this: Entries mean very little – campaign management is everything. I could have grabbed a position a day or two earlier or a day late. On the quantitative side of trading what matters the most is your campaign management. And that means having rules that firmly establish how much risk you take and how you manage your risk on the way up or down (in terms of earning vs. losing). For example for this particular campaign I am employing a basic ruleset which establishes the distance between my entry (4436) and my initial stop loss (4348) as my risk basis. If you do the math that comes out to 56 handles, representing 1R. When calculating my position size I made sure that a drop in 56 handles would almost exactly produce a loss of 1% in my trading account. That is my risk and the most I am willing to lose. No ifs and no buts.

From here I simply manage my risk as price either goes in or against my trading direction – in this case up. As the NQ reached the 2R mark my campaign rules instructed me to move my initial stop loss (ISL) to a trailing stop. I could have moved it to break/even at about 1.2R for example but decided early on (meaning before my entry) to dismiss this particular rule in the context of an important inflection point that portended a lot of potential whipsaw ahead of resolution. Meaning the market’s expected behavior near an important inflection point suggested that locking in profits too early could easily cost me my seat on the bus before it was ready to switch into 3rd gear.

Fortunately the tape took off like a rocket and at this point my main concern is to weigh already earned profits with the potential of future profits. My campaign management directs me to trail at -1R after the 2R mark. Which means my 2.5R paper profits would turn into 1.5R should the tape decide to suddenly head lower. That’s an eventuality I could live with as I most likely would get another opportunity to enter long after a retest.

You may have realized by now that this is not the first time for me at this party. The current scenario is unique but market behavior usually leaves you with a handful of most likely propositions. You prepare for those in advance based on historical precedence and then let the market do its thing. That’s called being a trader. Everyone can grab a lucky entry – what you do from there is what distinguishes you from the average (losing) retail trader.

The Art Of The Trade

In essence the art of the trade is to milk the tape for every single penny of profits you can get. And that is no easy task. But it’s not brain surgery either, as long as your rules are in sync with the type of market you want to participate in. A trending market (such the current one) requires us to facilitate a set of campaign management rules which are in line with the expected market behavior during a trend move. We expect high volatility which expresses itself either a) directionally or b) non-directionally. Right now volatility is still in its trending phase but profit taking will at some point produce a run to the exits.

At that point we will most likely be stopped out of course. Ideally that will be near the highs and further away from the eventual intermediate low from which we can then establish another entry. But one never knows plus your campaign management, being risk based (remember the 56 ticks?), have a built-in dimension which affects your earnings potential as well. Had my stop been 28 ticks instead of 56 then you’d be sitting on 5R+ at this point and my trail would automatically be a bit higher (at -28 ticks MFE instead of at -56R MFE). That may be too tight given the current volatility and I may actually want to trail at  more than -1R to keep me in the game. As you can see your R size is not only key to defining how much you are willing to lose but also affects the parameters of your risk management model. If you’re always using a 20 tick stop then it’s a lot easier but as soon as you use any kind of dynamic risk model it has a domino effect on everything post entry. 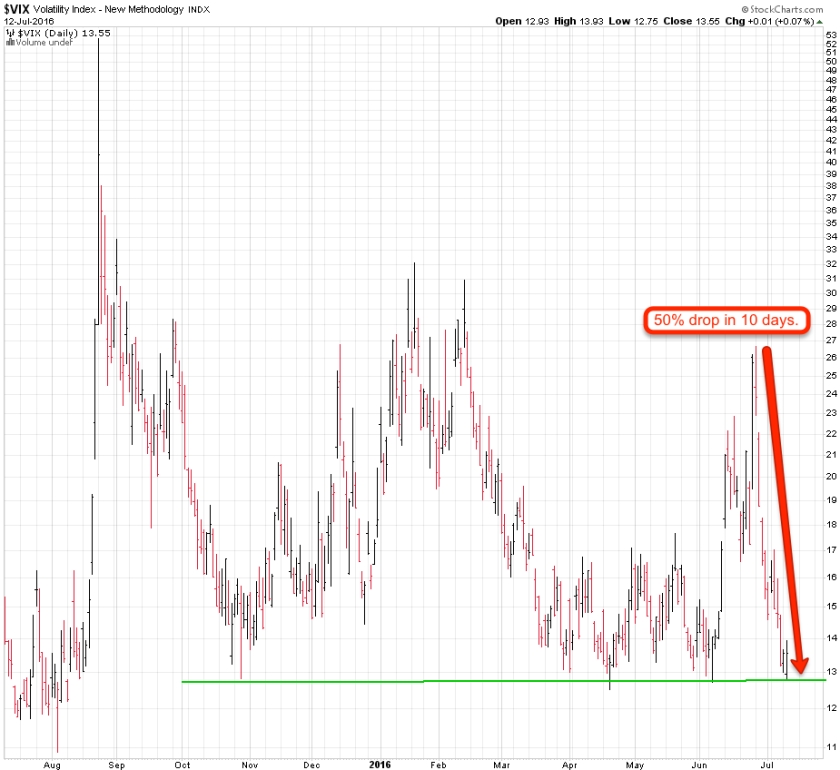 Alright, this was actually only one half of this post. Given that the VIX just experienced its biggest 10-day drop in history ever (i.e. 50%) I was eager to dig a bit deeper and share my findings with my intrepid subs. If you’re not one of them then I recommend that you remedy the situation post haste.