Back in September I put up a lengthy post hypothesizing on two scenarios – Soylent Blue and Soylent Green. The latter was putting us into Primary {3} – the former (which we got) suggested that we would push into 1085 on the SPX. Okay, I have been 15 handles short but any of you who now have relegated Elliott Wave Theory to the dust bin of charting magic should go back and read that post again. Not that we can’t revisit these highs again, but if we do I am quite confident that a large drop would ensue shortly after.

Another reason to read that old post is that it offers a fairly good intro into Chris Carolan’s work on what he terms the ‘Spiral Calendar‘. It’s one of the more exotic perspectives of looking at charts that I allow myself – for the pure and simple reason that it’s eerily accurate. Carolan’s book is out of print but you can still snatch up used copies if you look around. The Spiral Calendar is a set of time units where the numbers of moons are measured in square roots of Fibonacci numbers. One moon cycle is 29.5 days, the time unit of the human reproductive cycle. The table shown below shows F1 through F35 – I usually do not measure beyond F16.

The Spiral Calendar is a system of measuring time quite differently from conventional clocks and calendars. Most numerical systems, having defined a base unit, proceed in arithmetic increments of that unit. The Spiral Calendar moves in logarithmic increments. The second number of the sequence is not twice the first and the third is not three times the first, as in arithmetic progression. The human mind naturally prefers arithmetic methods of counting. The conventional analytic approach of time cycles (regularly repeating intervals) reflects this fact. However, it is the logarithmic function that has long been understood as the growth function, intimately connected with the life process. To apply this idea to the dimension of time reveals the patterns of life produced by the logarithmic building blocks of the Spiral Calendar.

What all that boils down to is this handy table of Fibonacci based time cycles:

You can skip all the columns except for ‘n’ and ‘days’. F3 for instance is the third time cycle and equals 42 days (rounded). F8 is the eight obviously with 135 days. Now, this is where it gets tricky and a bit subjective – the exercise at hand is to connect major tops and bottoms in order to determine if they somehow correlate via those time cycles. I personally allow 3-4 days max for any time cycle below F9 – after that I’m a bit more generous as the cycles get pretty large.

Okay, now that I have the noobs on the same page let’s take a peek at my current chart: 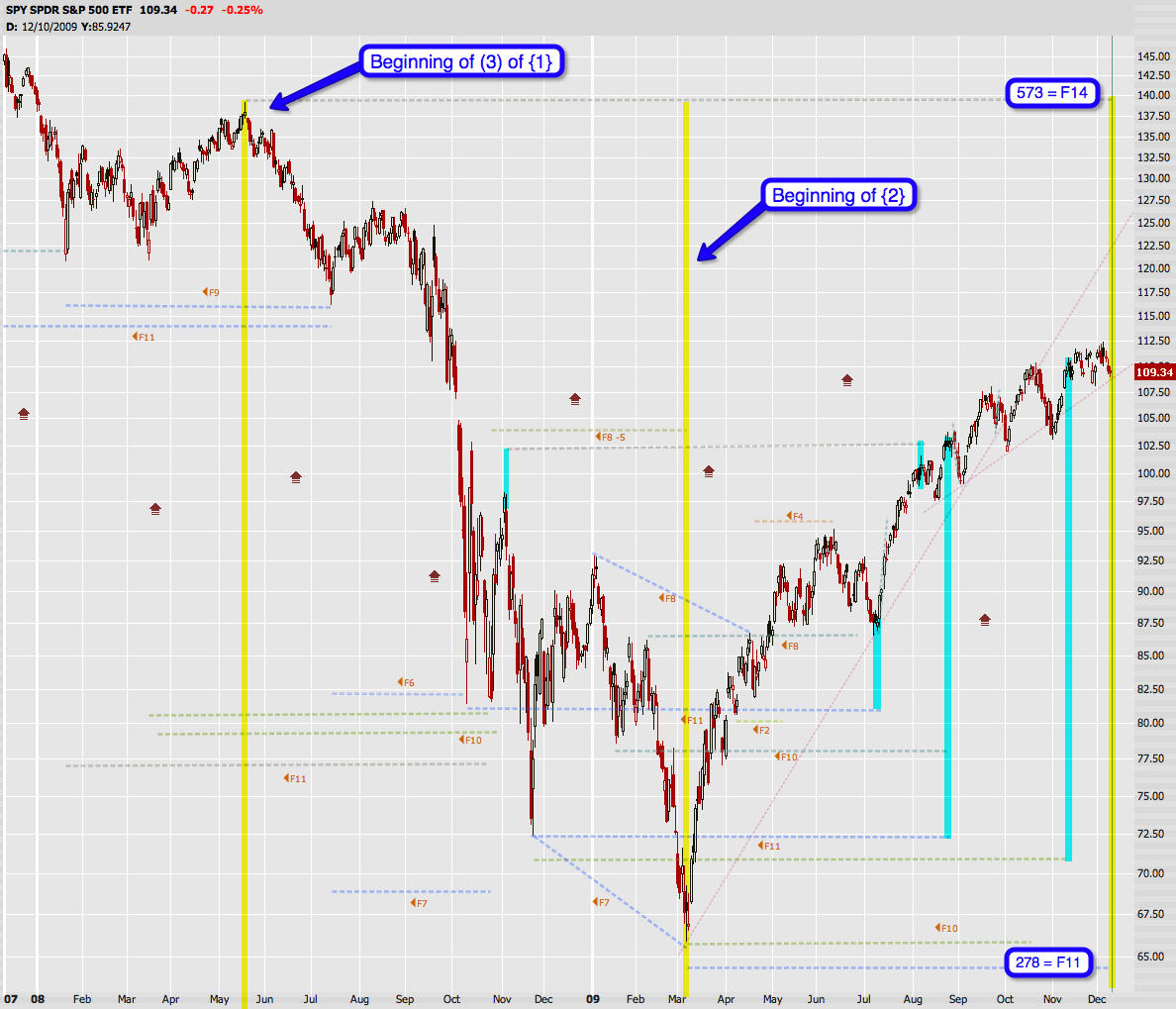 You might want to click on this one as it’s quite large and detailed. What I’d like to point out this time around are two significant long term time cycles which both line up with today or tomorrow. The first one is an F11 on the bottom which spans from the very bottom of Primary {2} to pretty much now. The second one is an F14 which stretches all the way back to the beginning of Intermediate (2) of Primary {1}.

So, what does all that mean? Well, we can’t be 100% sure of course as these long term time cycles can be off by a week or so, but looking at the entire ‘picture’ if you will and considering that we have two time cycles coincide so nicely chances are that Primary {2} has either concluded last week or is very close to doing so. Yes, I’m choosing my words very cautiously as I know how easily things can drag out in long term overbought conditions like that – and in particular as I’m writing this in the second week of December. But if I was long the market right now (which I’m not – only a few select symbols) I would be very nervous looking at the chart above. Especially in light of the fact that the majority of the past cycles I drew either produced a drop or a rally shortly thereafter. Even in my last post on the subject in September I suggested that a drop was looming ahead around September 16th (I was hoping Primary {3} but was wrong on that) – and we dropped hard on September 23 after having gone more or less sideways after the 16th. So, that would have been a nice entry – and I hope this time I’ll be lucky again. 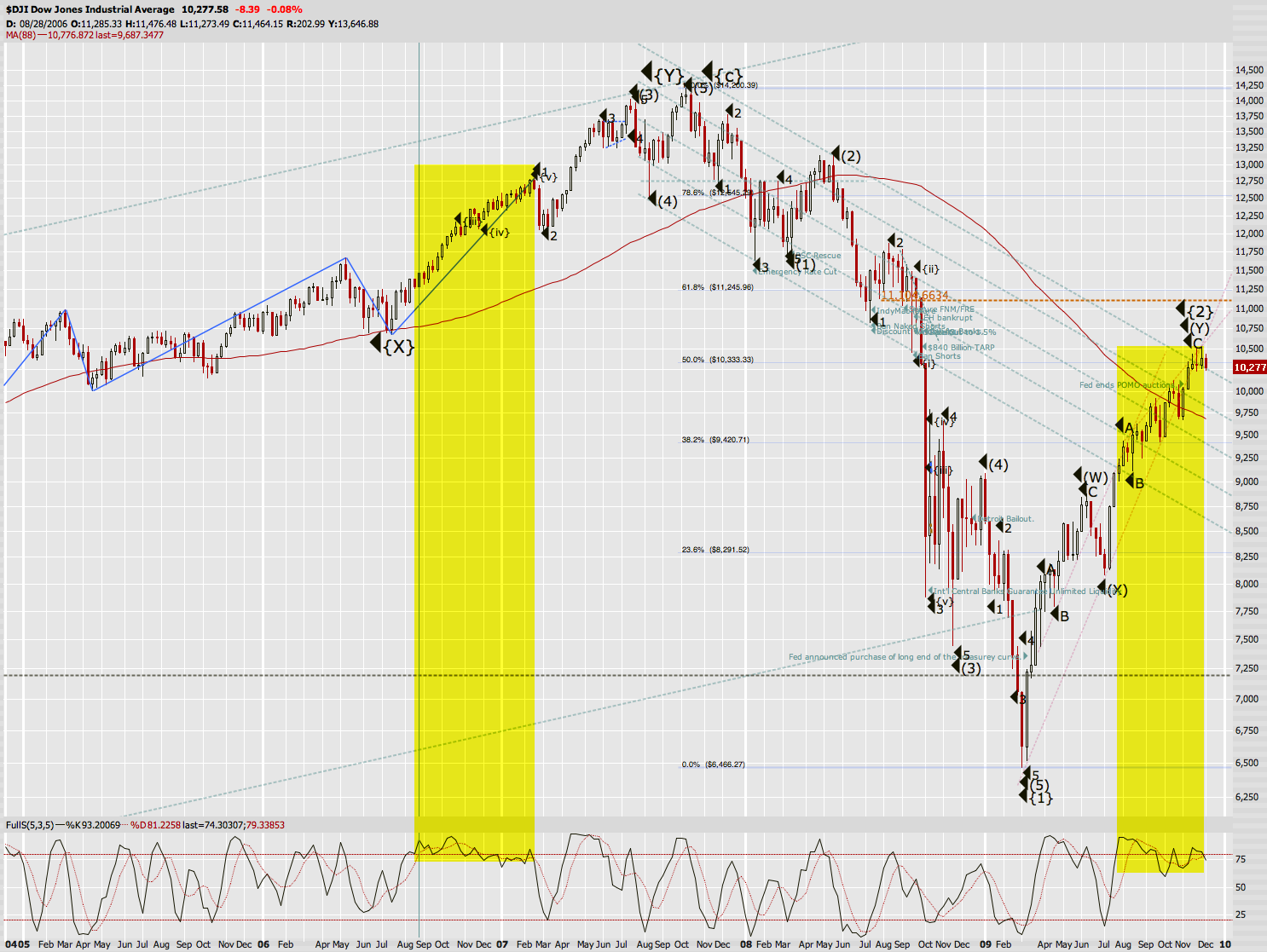 This is the chart that leads me to choose my words very cautiously. I have posted this one several times before as I was expecting a massive drop in equities when we poked through the 75% mark on my trusted weekly stochastic. However, what we got instead was an overbought ’embedded’ condition – very similar to what we saw back in 2006. 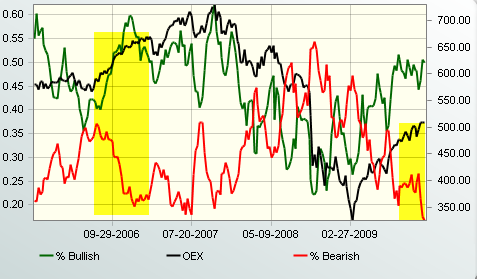 However, I must add that bearish investor sentiment is quite a bit lower this time around and has not been this this low since … well, I had to go way back: 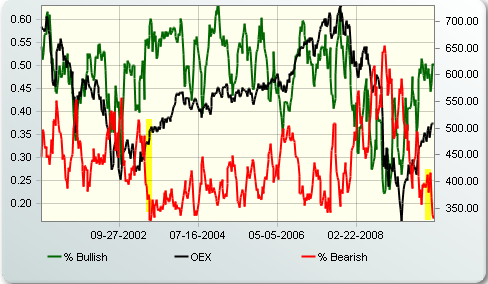 That’s right – June 2003 – and what immediately stands out is that the market happily kept pushing higher. So, why not this time around? 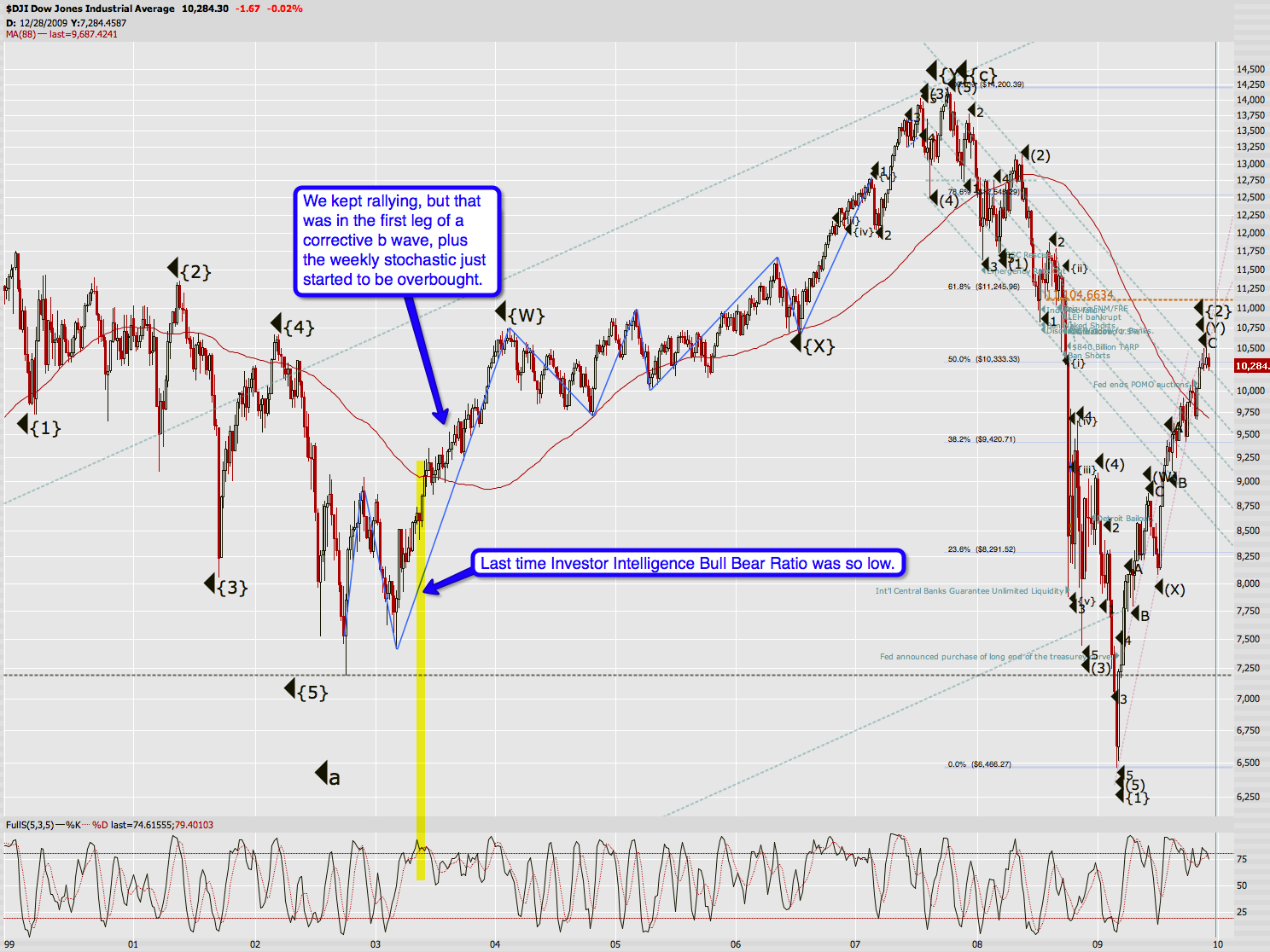 My weekly stochastic just started to be overbought then – and also kept swirling slightly below the 75% line. T’was a different time then however as we just started our b cycle wave which would eventually get us to the market’s price extreme at 14,198. Is this where we are going right now? The bulls happen to think so – I personally believe that on a long term basis we are about to roll over a cliff. 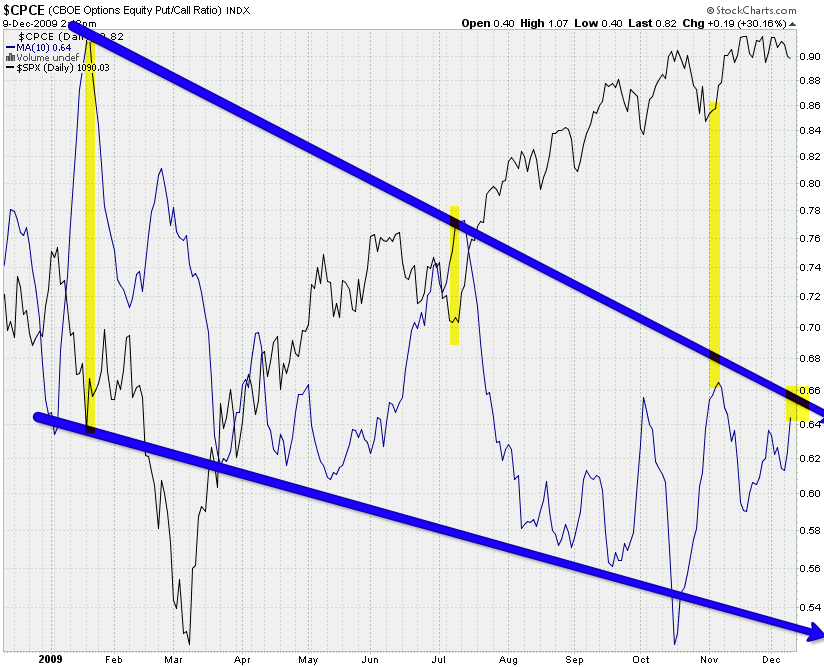 More short/medium term this chart is making me very nervous – if we hit 0.65 on the 10-day MA of the CPCE plus if we push outside the 2.0 BB on Mr. VIX I would strongly recommend you close out your index puts and call it a year. 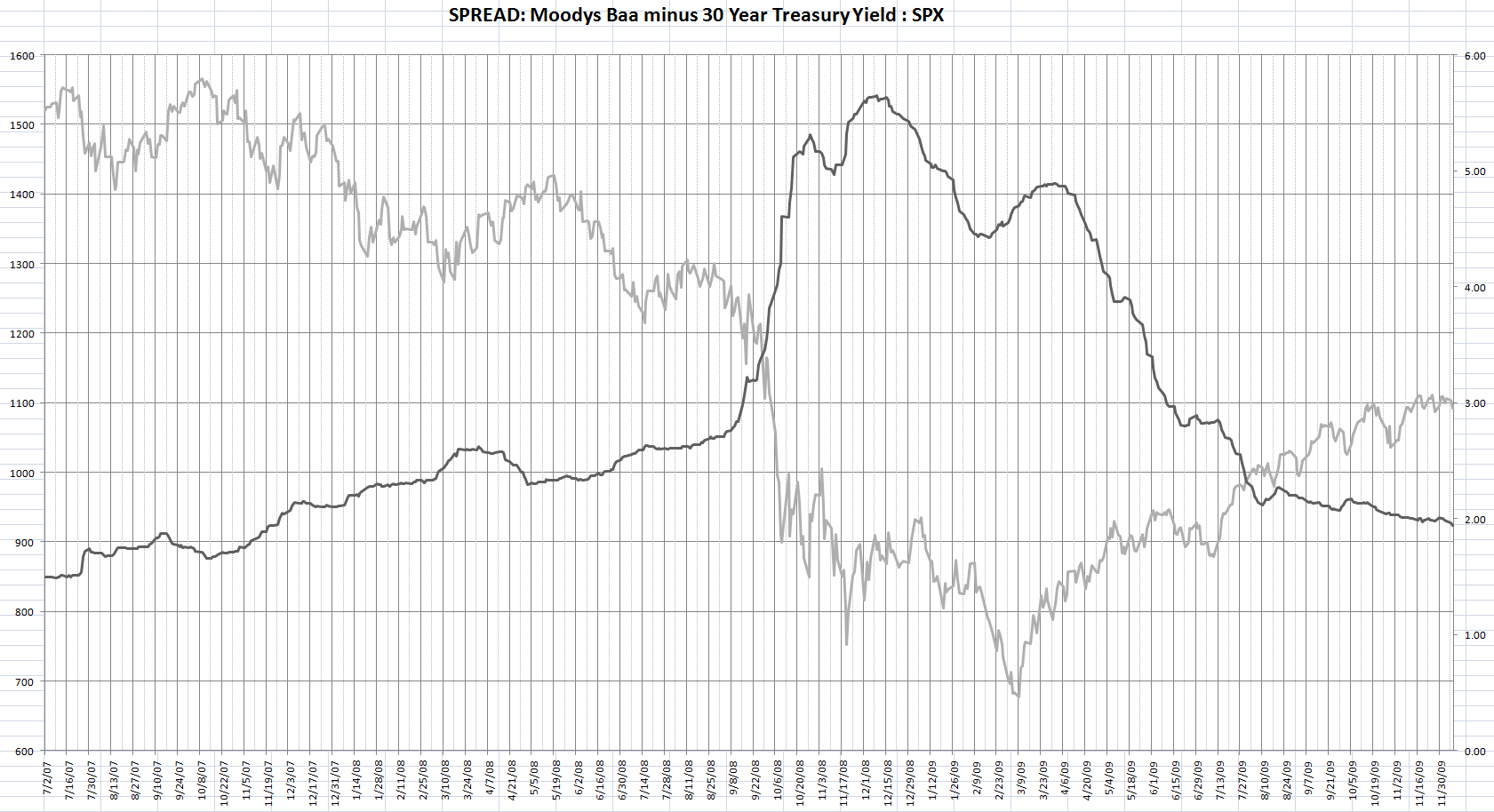 And finally – another caveat for the bears, the BAA-TYX spread chart I’ve put together. I’m sorry to report that the spread remains glued to the 2% mark and has now even dipped below it. So, no matter what they tell you out there – risk is still very much en vogue. Perhaps a rapid rise in the Dollar will lead to a swing up but remember – what we are looking for is for this spread to precede a turn in equities. Thus far it’s not budging and that’s not a good sign for the bears. When it does I’m getting excited and all long term bearish again – but until then I’ll play the swings.

So in summary – we have a set of conflicting indicators – some suggesting a large drop is ahead, others indicating that the bulls will retain their stronghold on equities. Of course this is holiday season tape and thus I allow for distortions and fake signals. On the currency side the Dollar is holding on thus far but we have been fooled early November and if this time is supposed to be for real ole’ bucky needs better start dusting off its pair of Nikes. As a whole the odds are a bit iffy right now and I doubt that anything major is going to transpire until after the holidays.